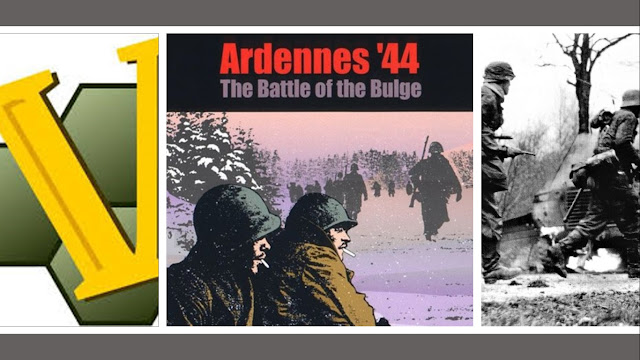 The situation in our Ardennes'44 game on the the second day (December 17th) opened up with great promise for the resumption of my German offensive plan following a very successful opening particularly on the 5th Panzer Army front in the centre where avenues opened up to allow rapid progress towards St Vith and Bastogne in the next twenty-four hours.
Ardennes'44 Battle of the Bulge on Vassal Part One
However a quick glance at the Appearance Card below for Turn 3, the 17th December, shows the large number of US reinforcements set to arrive in response to the offensive, with likely rapid reinforcement of the troops facing the 6th Panzer Army on the German right flank spearheaded by 1st and 12th SS Panzer Division with German reinforcements principally limited to a few army battalions, the balance of 3rd FJ Division and a von der Heydte Fallschirmjager drop in the area, but not much else.

As expected and in reality the ill-trained FJ parachute drop came to nothing with them being dispersed and captured and the fighting on the front around Elsenborn and Monchau proving difficult for the SS units to make much progress.

The area facing the 6th Panzer Army offers a tantalizing opportunity for the SS units to break through past the US defenders on the Elsenborn Ridge to take the towns of Elsenborn and hopefully Monchau before pressing on to the next key line of Malmedy, the fuel dump on the Malmedy Road and Eupen beyond. However the US units on this front present a tough opponent with rapid reinforcement should a breakthrough fail to materialize and despite my best efforts using SS Kampfgruppe Peiper and the 12th SS to open up the main road on their respective fronts, which with Peiper was managed, the fighting to do it left no opportunity to move other units forward to secure key points.
The 12th SS attempted to break the line around Monschau with a 5:1 attack on the weakest part of the line only to have their attack aborted by a Time on Target US artillery strike on their forming up positions that completely unhinged and stopped the attack, (US artillery on the defence most commonly lowers the attack ratio by one or two levels but has to be treated with caution, as with a '1' rolled, as Steve managed, they can get a TOT barrage) whilst Peiper on the road with 1st SS failed to clear US blocking units, forcing me to throw in Panzer Brigade 150 with their disguised US armour to help the attack.
The success of the attack through the centre of the US lines could be gauged by the stacks of 'Disrupted' US troops driven back from their positions on the River Our and retreating to Bastogne via Clervaux alowing Panzer Lehr and 2nd Panzer Division to press forward in their wake with the 26th Volksgrenadier Division moving out to the army boundary line with 7th Army to press their attack towards Wilz.
More resistance was encountered by 116th Panzer Division as their attempt to push on through the bottleneck on the road to St Vith was stymied by US bridge blowing that forced follow up units to divert to other crossings close to Manarch before turning right for the key town which will likely offset its fall for another day.
With the limited mobility and armour resources of 7th Army I contented myself on this front of securing my forward river line defence around Echternach, repairing bridges to my rear, bringing forward my guns in support of the line and limiting further attacks to 5th FJ Division which they pressed well threatening to take Diekirch and hopefully Ettelbruck later that day before the arrival of strong US reinforcements on the 18th. 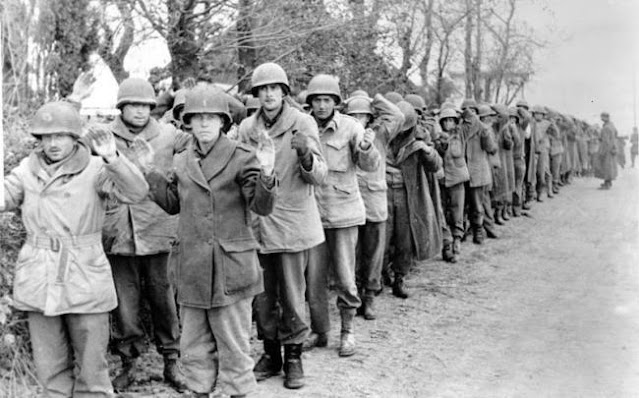 So with a good consolidation of ground made on the morning of the 17th December, but with worrying issues on the German right flank, could further progress be made to secure key targets in the afternoon of the 17th?
The afternoon of the 17th saw US troops pushing forward engineer battalions into key towns just behind the front line as their comrades further forward sought out blocking positions in forests close to main roads to force follow up German units to deal with them before pressing on to their key targets.
Despite the US efforts to slow the German advance three more victory centres fell in the afternoon fighting and another three came under attack as the US front continued to fall back under the attacks on 7th Army and 5th Panzer Army fronts, with five of the ten German objectives taken by the end of the day leaving another five to be captured and held on the 18th.
However US resistance on the German right flank threatened to undo the gains made else where with the critical towns of Elsenborn and Monschau vital to securing the ten areas needed to secure the progress made on the first three days.
So with half the German objectives achieved in the first two days of Operation Wacht am Rhein and with the first truck loads of US Airborne troops arriving from Paris it would be all to play for on the 18th December to grab the other five key areas and hold on to them as US reinforcements are rushed forward. 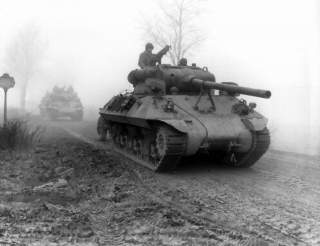 In the third part of this series of posts Steve and I will conclude our game focussed on the first three days of the Battle of the Bulge with a climactic ending that had us both on the edge of our seats as our digital-cardboard warriors fought hard in the closing phases of play.
Next up I have a book review and work progresses on the next six models to join the Trafalgar Collection.
Posted by carojon at 00:32