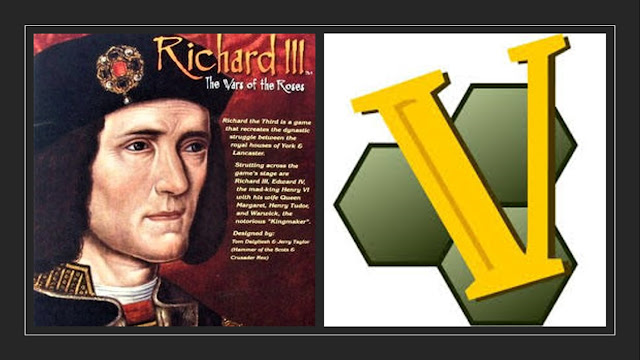 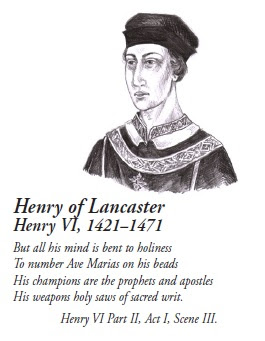 Over the Christmas break, Steve and I reacquainted ourselves with another of the Columbia Games family of block games we have enjoyed playing face to face in the past, namely Richard III this time on Vassal and recreating the bloody events of the 'Cousins War' latterly come to be known as the War of the Roses.
The Columbia take on this dramatic time in British history is a campaign game of three separate but linked games of seven turns recreating the fighting and fleeing abroad by the losing faction, raising money and troops reinvading and having another go at claiming the throne that came to characterise the wars between the rival houses of York and Lancaster with each house represented by a hierarchy of five Royal Nobles backed up by noble supporters and able to supplement their forces with those of the church, levies, mercenaries and rebels.
Of course the built in fog of war by the use of blocks, that hide the identity of what forces are gathered before you by the enemy, means battle is always fraught with hidden menace as the strength and quality of the enemy is only revealed when the opposing parties are brought to the battle board.
Then by adding in the odd plague, storms at sea, and a variable number of Action Points generated by a hand of cards that enable forces to be raised and moved, the game sets up a framework for both sides to achieve dominance in the kingdom by ending up having more nobles loyal to them than the other side. 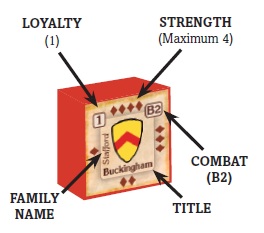 The game sets the scene by having the weak and ineffective Henry VI, the grandson of the usurper Henry IV and presiding over the loss of noble estates in France following his fathers early death after his victory at Agincourt barely holding the situation together and with the House of York set to invade from Ireland and Calais to march on London. 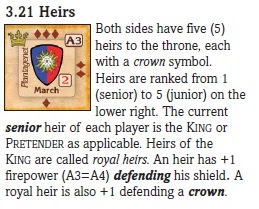 In our game I took the House of Lancaster and Steve York as we concentrated our forces in the South of England in the counties of Hampshire, Wiltshire and Oxfordshire that resulted in the Lancastrians forced to take a boat to France and with the map below dominated by Yorkist sympathisers and just two Lancastrian hold outs in Wiltshire and Devon.
The only glimmer on the horizon for the Lancastrians was our decision to include the 'Historical Events' additional rules that sees the rolling of a d6 by the King, the Pretender and the King again and consulting a list of plausible events that occurred in the short periods of peace that held between the series of campaigns.
In the event Steve ended up seeing both Richard Duke of York and Edward Earl of March succumb to a bad case of the vapours and die leaving him three heirs to work with through the next two campaigns. 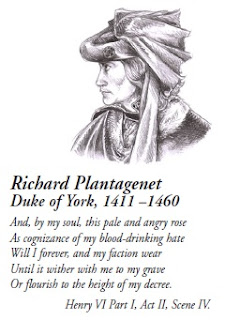 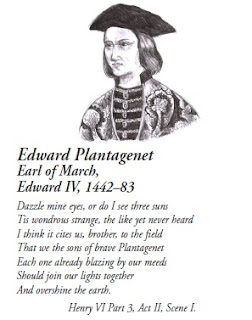 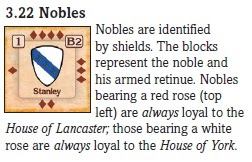 The Lancastrian power base, following the defeat in the first campaign had taken a decisive shift to the north of England and so I decided to launch my second campaign in Cumbria and Scotland which on reflection was  not such a great plan as I had envisaged.
By focussing my efforts in the north, I allowed Steve the time to mop up my supporters in the south and the time it took crossing the various parts of mountainous terrain on the Scottish border and over the Pennines left little scope to  press my campaign south and with Steve carefully putting few nobles in range of my Lancastrian hoards but leaving his forward defence of the Midlands to levies and mercenaries he was able to close out the second campaign with a couple more nobles on the board forcing the Lancastrians to flee to France yet again. 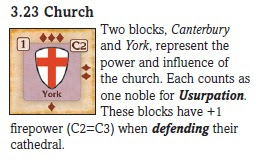 The historical events chart nearly came up trumps for Lancaster as Steve managed to annoy Warwick the Kingmaker enough to see him change sides only to find on his second die roll that Warwick had changed his mind and re-joined the Yorkist fold.
Oh well things were looking decidedly uphill for the Lancastrians with a three noble advantage to York on the map I would have to try and kill that many and not loose anymore of my own to have a hope of reclaiming the throne and I would not make the mistake of landing too far away from the midlands to have enough time to try and bring on one or more major battles where I could hope to kill Yorkists.
For the final campaign Henry, Somerset and Prince Edward joined with Stanley in the royal county of Lancaster bringing down the Scots and the nobles from Cumbria and Northumbria whilst raising the Levies of Newcastle together with the Church troops of York and some Lincolnshire rebels.
The final clash came in the Royal estates of Derbyshire as Steve pushed forward a picket line of militia and mercenaries bolstered by the occasional noble to frustrate my advance and leaving the map above solidly white from the midlands southward, protecting London, and a stack of dead red noble blocks against a smaller stack of white ones just off the Bristol Channel. 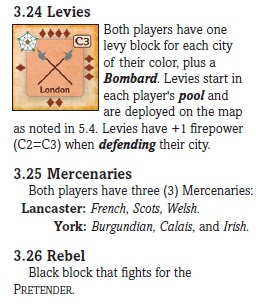 Thus history was reversed and Richard Duke of York took the throne as King Richard the III and didn't end up in a parking lot in Leicester! 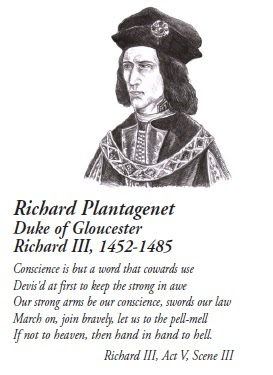 It was fun playing Richard III again and certainly a challenge playing the Lancastrians who don't quite have the quality of the Yorkists and are difficult in my opinion to come back with from a poor start which I certainly managed to deliver and Steve managed very well by helping me to lose my nobles whilst killing his mercenaries in the later campaigns, coupled with a poor decision on my part for my landings in the second campaign.

Of course the card play and available events and action points make sure one game can be quite different from another and the historical event chart adds a little extra spice especially for the House that is on top having to suffer two die rolls on it between campaigns.

So with medieval England in our wake and with 2021 beckoning Steve and I headed off back to WWII with our current game now into its third week and one that is a bit of a monster ideal for playing on Vassal, 'Ardennes 44' from GMT with Steve taking the Allies and me climbing aboard my Tiger II and heading off towards the Schnee Eifel, more anon. 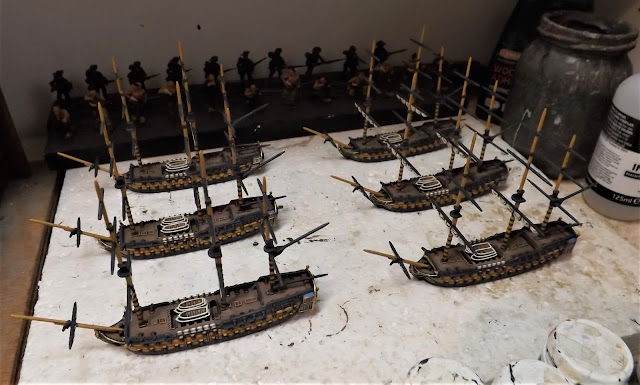 Next up: Well I'm not sure exactly, the editorial team are still debating the next post, but at the top of the queue are my six French generic 3rd rates in Revolutionary War trim set to join Villeneuve's Trafalgar line up, The sticks are up and they are going into the fitting out yard to have sails and rigging issued from the stores this weekend. 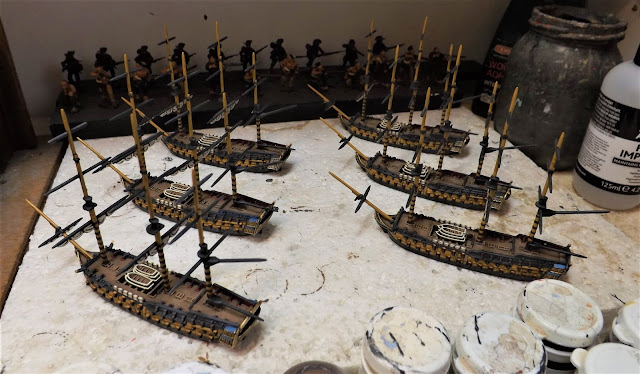 My normal building routine has had a slight departure from normal with recent messing about on the games table, trying out rule sets and I might take time to take a look at rules in the age of sail following a chat with the chaps at the DWG on our weekly Zoom gathering to talk wargaming and other stuff whilst enjoying a beer or two.

The other plan is to update on the Trafalgar project with all three fleets nearing completion and the first naval reviews being planned.

Email ThisBlogThis!Share to TwitterShare to FacebookShare to Pinterest
Labels: All at Sea, Board Games, JJ's Wargames, Vassal