All at Sea - Completing the Heavy Weight Punch, Three British Three-Deckers added to the Trafalgar Collection

The last three models to complete the collection of British ships of the line and indeed for the collection as a whole are these three British generic three-deckers, designed in this case to bring the British line up to include seven of these types including the Victory and Royal Sovereign. 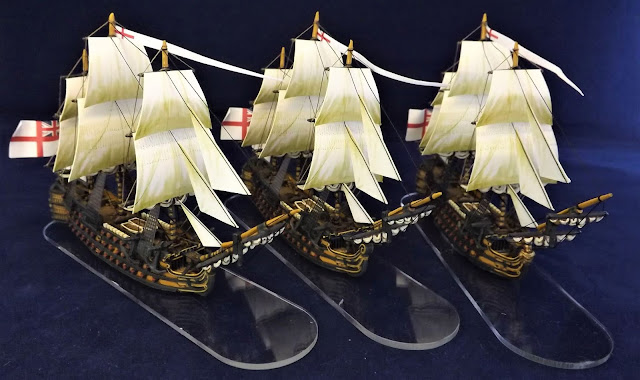 As a little twist in the work to complete this collection these last three models were not constructed without some little issues to overcome, with new anchors needed from my spares box because of missing flukes and the odd weakly cast bowsprit that broke off on fitting and needed some brass rod to pin it back securely, finally firmed up under the secure hold of the standing rigging. 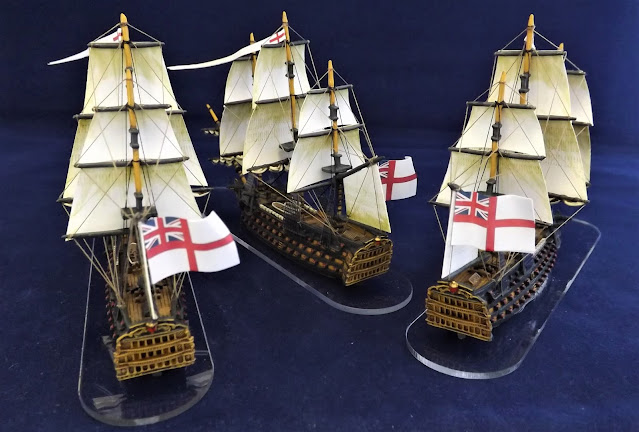 As with my look at the Spanish first-rate last week designed to represent the Rayo in my final line ups, these three models have been kept completely generic and will suffice the need to represent other British first and second rates in other actions and scenarios I plan to play going forward.
Also as discussed in my March post looking at the other recently built British generic three-decker, these models positioned throughout the two British attack columns really deliver a punch/counter-punch option for the British player, for breaking in among the ships of  the Combined Fleet and fending of any attempts to aid the centre and rear from Dumanoir's van squadron.
All at Sea - British Generic First/Second Rate 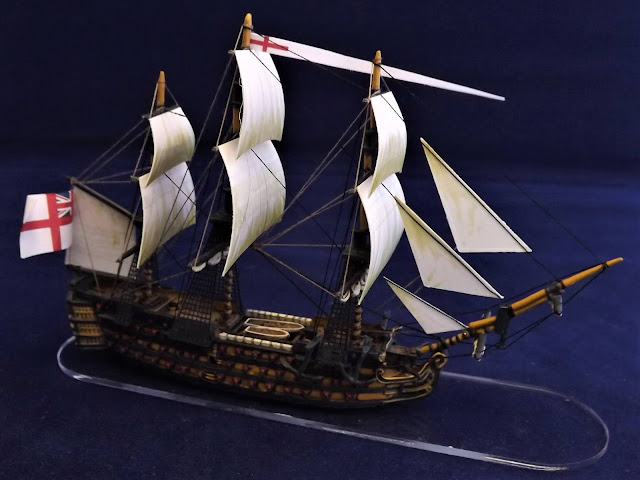 With the collection of models now built I have turned my attention more fully to producing a game with them taking into account the size of the scenario and the models to be used, with the rules of play pretty much sorted together with the additions needed to capture the feel of a Trafalgar game and so this Easter Weekend has allowed me time to pull together various ideas around additional rules, ship records, signal books, table plans and general game markers and ship number labels.
I plan to maintain the minimalist look of the ship bases, thus hopefully not distracting the eye away from the models on the table by too many over powering labels and tokens, so in the end have settled for just a small colour coded ship number to fix to the base that is easily removed, should I choose.
My experience playing Carnage & Glory revealed the ease of play, numbered bases allows when there are lots of units on the table and colour provides another quick reference to help players identify their own side.
A quick glance at part of the C-in-C's master record sheet below shows the ship numbers for each model and their respective commander, his flag-ship and his identifying signal pennant for addressing specific signals to his command, rather than the fleet as a whole, with signals addressed to individual ships enabled with their number.
In many ways, this aspect of game planning is as much fun as constructing the models in that it is another part of creating the game you are hoping to produce and as with the look of the table and models, the play aids and rules add to help put the players in the cabins of the commanders and an aspect of the hobby I really enjoy. 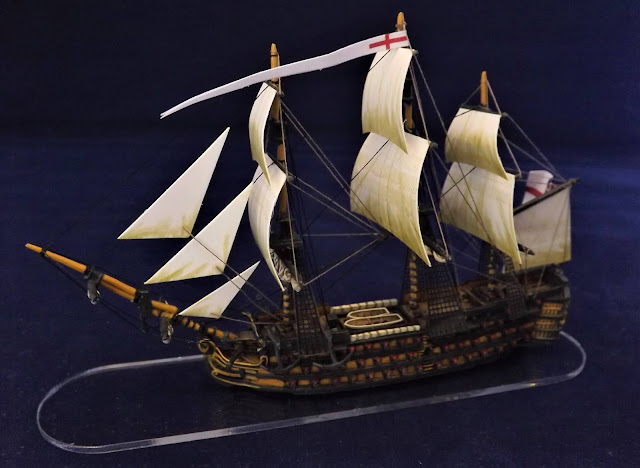 After lots of thought and consideration, I feel happy I now have the rules, 'Kiss Me Hardy'  sorted out to run the game and have pulled together various additions to them from over the years, published in the Lardy Specials, to produce a more 'joined up' presentation of them, for us to use in our games, including a few additions from other sets that I hope will tweak them for the better without changing them too far and losing the game play that characterises them, with play-testing allowing that to be judged and to keep what works and ditch what doesn't. 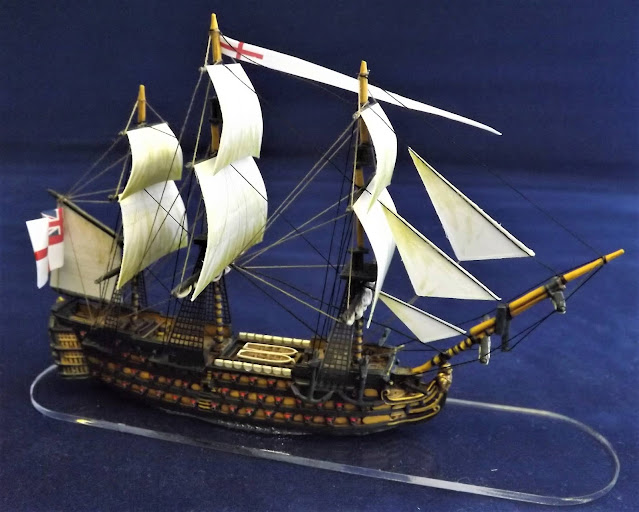 Why KMH you may ask, particularly if these are not a set you would tend to use? Well I and the chaps at club are very familiar with them, they have been used to play Trafalgar for the Lardy 2005 Commemorative game which has helped enormously in planning my own take on it, and the chit mechanic of activation is an aspect of Lardy rules that have become a part of the way I like to see a game run with the unpredictability it produces and potential challenges it can throw at players trying to manage them.
The other key aspect is that they produce a game that contains the granularity of detail between the various ships and commanders whilst also allowing reasonably fast play that, if the 2005 game is anything to go by, will allow a game to play through over six to eight hours, thus filling a full day's gaming and giving that all to important level of detail that captures the story of the battle we are trying to recreate.
Finally the scale of Kiss Me Hardy is ideal for playing the game with 1:700th models in that they are scaled at 1:900th thus the one inch to 25-yards is perfect for models built around one to 20-yards and the difference being negligible means the rules can work to their centimetre set up and give game turns equivalent to two minutes of real time action.
Ok, so at this scale you will need a lot of ocean to play Trafalgar but then the intention here was always to play in the 'Grand Manner' with the size of table designed to complement the models and capture the grandeur of the scene of battle as observed at midday on the 21st October 1805.
The other aspect of going large in naval that really appeals is that a large table helps to offset the 'helicopter-view' of the respective commanders by making the battle spread out and somewhat localising each commanders observations as to what is happening in the overall battle and help provide a little more of that fog-of-war experienced by Nelson and Villeneuve reliant on regular reports from subordinates to know what was going on along the line of battle at any particular time. 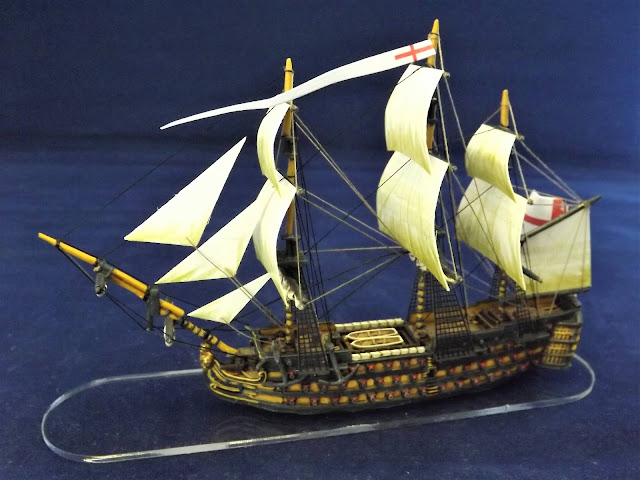 If as I hope we can build a method of play around a big battle such as Trafalgar that makes for a great player experience then it might be fun to run these kind of games on a regular schedule opening it up to others who might like to spend some time in glorious Devon playing naval wargames and making a much needed contribution to an appropriate charity whilst having a fun day wargaming. 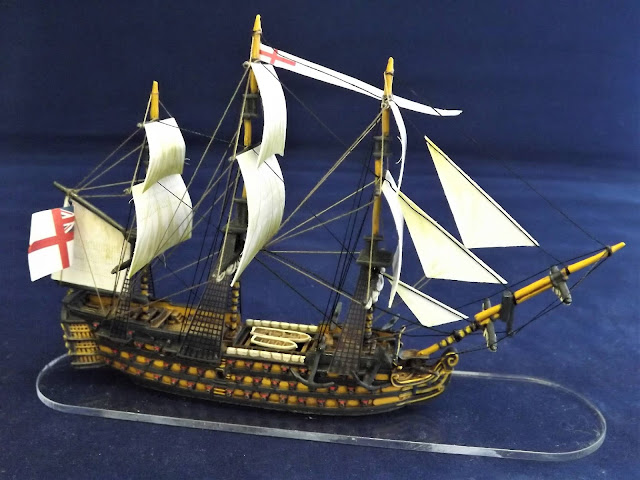 Anyway that is all down the line and first things first are much more mundane with the next jobs on the 'To-Do List' that include budgeting for extra table cloths to cover the expanse of table space needed to play the game and create the look of this titanic naval clash together with pulling together ideas around storage boxes and trays to be able to transport the models securely as required.
In the meantime I will also start to make additions to this collection going forward which will enable other interesting large actions from this era to be played, with Cape St Vincent, Camperdown and Copenhagen being others that appeal with a few additions of some at anchor options to facilitate some of the smaller squadron clashes, such as First Algeciras and The Nile - what fun! 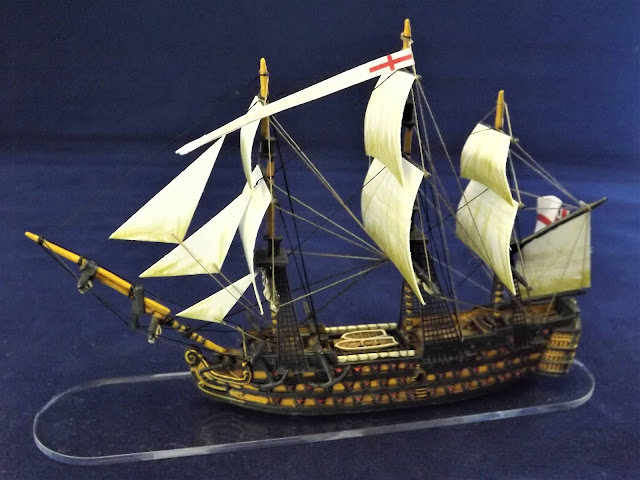 So this post concludes the completion of the large fighting ships at Trafalgar. In the final post looking at the models built for this collection I will feature the small ships at Trafalgar, that had a key role to play, namely the British schooner Pickle, cutter Entreprenante and the French brigs Argus and Furet.
Also coming up, Steve and I have been battling away in the Second Punic War and our first game is coming to a conclusion, so I will put together a summary post of our play and first impressions of this vintage card-driven-game.
Posted by carojon at 00:46