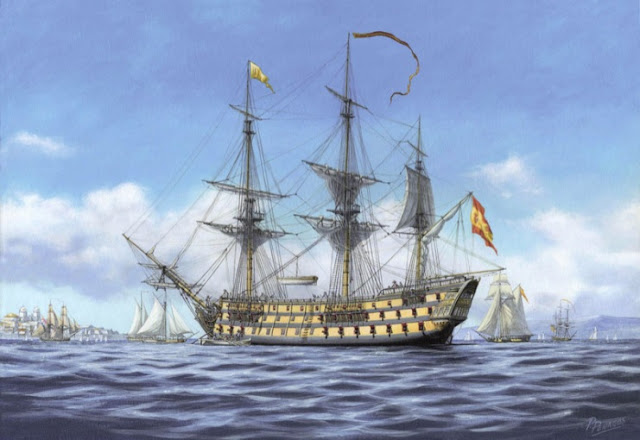 The Lightning - Carlos Parrilla Penagos
https://www.carlosparrillapenagos.es/pintura-naval/
This Friday, probably appropriately on 'April Fool's Day' 2021, the Trafalgar collection was finished and the last six models added to the collection.
The last Spanish ship needed to complete the forty ships of the Franco-Spanish Combined fleet was a three decker designed to fill the requirement of the Spanish 100-gun Rayo or 'Lightning' which began her career as an 80-gun 3rd rate ship in 1749, making her, with her fifty-six years of service, the oldest ship to take part in the Battle of Trafalgar, but also with her later refit in 1803 to having a third upper deck built, allowing her to carry 100 guns but leaving her, with her original two gallery stern quarters, as a bit of an anomaly and not your usual looking Spanish first rate.
This explains why I left the building of the model to represent the Rayo to last as my options were to work with the generic Warlord Spanish first-rate model or to modify the Spanish 80-gun scratch-build I worked on last year, by adding a similar upper deck but retaining the two galleried stern quarters.
In the end I decided to operate to the principal I established at the start of the project, namely to produce a collection of models that would together achieve an overall look to the table-top battle I was looking to model and not necessarily have an exact representation of every ship that took part.
This principal also works well with plans to add to the collection to do other large battles of the era and so looking to, at some stage, recreate the forces at Cape St Vincent in 1797, I will only require another nine Spanish 3rd rates and four more first rates to produce the Spanish fleet and this model will work very well as one of those Spanish first rates that took part.
The Rayo or as she was originally named, the San Pedro, was designed by Juan Jorge and built by Pedro de Torres, being laid down in Havana in 1748 and like many of the fine Spanish ships built there was completed in the finest tropical hard-woods, launching on the 28th June 1749.
Her original armament as an 80-gun ship consisted of 30 x 24-pounder long guns on her lower deck, 32 x 18-pdrs on her upper deck and 18 x 18 pounders arrayed on her quarter deck and forecastle.
As with most of the large ships built in Havana she was destined to set sail for home soon after completion, but due to several unforeseen delays she didn't make the passage to Cadiz until 1752 arriving in Cadiz on the 30th April that year.
The ship would continue her service career operating out of Cadiz, receiving a set of taller masts in 1757, operating from Cartagena from 1765, and then to El Ferrol from 1774 before being placed in ordinary in Cadiz in 1777 having received three full careening's in the previous six years indicating her time at see fouling her bottom. 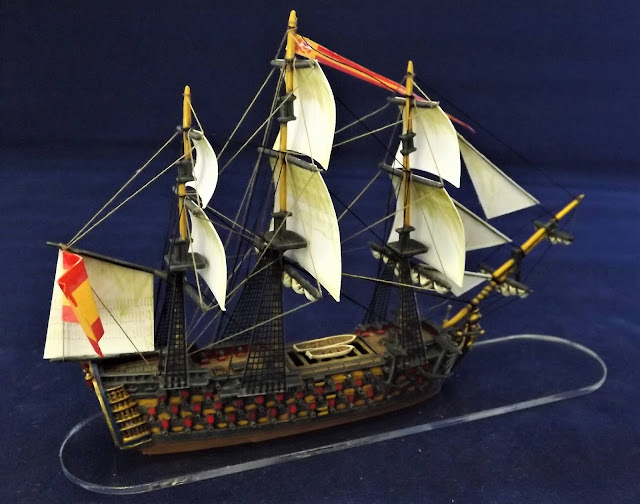 In 1779 she was back in service operating with Admiral Cordova's fleet in the Atlantic and English Channel approaches as Spain allied with France against Britain during the American War of Independence, taking part in the destruction of the British convoy of fifty-one ships bound for India and the West Indies on 9th August 1780, later taking part in the assault and siege of Gibraltar in September 1782 and seeing action in the running engagement off Cape Spartel in October of that year as Cordova failed to prevent British Admiral Howe from running the Spanish blockade with his newly coppered ships and relieving the beleaguered garrison. 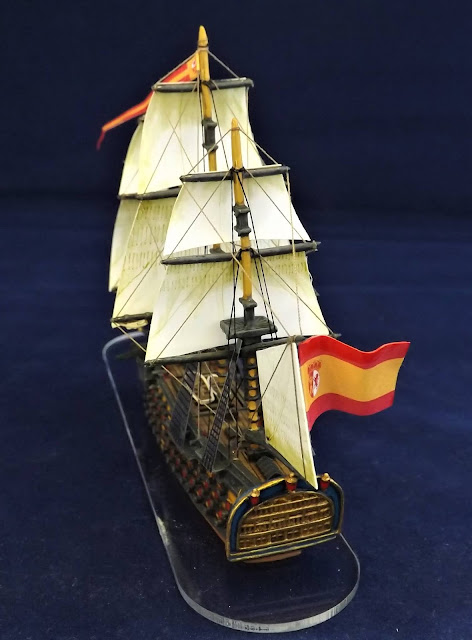 Following the end of the American War, Rayo was in action in 1784 taking part in the punitive action of the second bombardment of Algiers between 12th and 21st July leading eventually to the Dey of Algiers negotiating with Spain and agreeing to cease further acts of piracy in the area.
By April 1785 the Rayo was back in ordinary in Cadiz, only to be refitted and prepared for service in 1790 as tensions rose between Britain and Spain over the Nootka Sound crisis as the two nations raised naval forces that put to sea and threatened naval action in response to the impasse, however by December, following a climb down by the Spanish she was back in ordinary 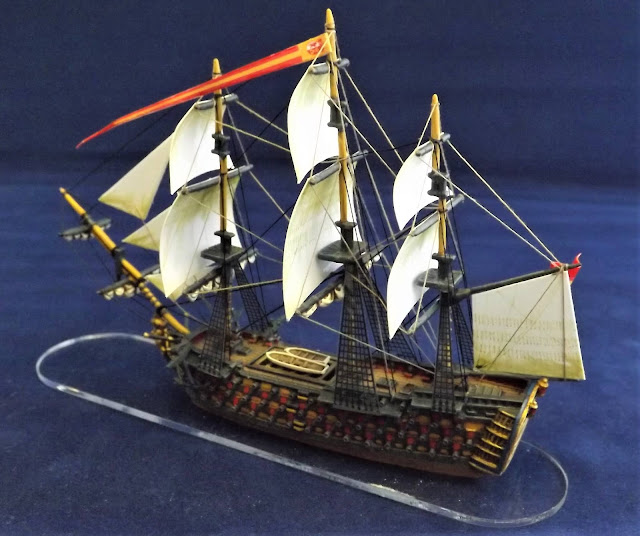 On the 12th May 1804, with hostilities between Spain and Britain recommenced, the Rayo was refitted for the coming struggle with a third deck added and a new copper bottom carried out under the instruction of marine engineer Honorato de Bouyon.
However despite the best efforts of the Spanish naval command in Cadiz, the minutes of the Combined Fleet Council of War, held on the Bucentaure, reported on the 8th October 1805 that the Rayo was one of three ships described as
'fitted out in haste and barely out of the dockyard, can in extreme necessity put to sea with the Fleet but that they are by no means in a state to render the service in action of which they will be capable when they are completely organised.'
The new 100-gun Rayo could at least boast a much heavier armament that in her original incarnation and at Trafalgar she would carry 30 x 36 pounder long guns on her lower deck, 32 x 24-pdrs on her middle deck, 30 x 8-pdrs on her upper deck and an array of 4 x 4-pdr howitzers and 4 x 28-pdr carronades on her upper works. 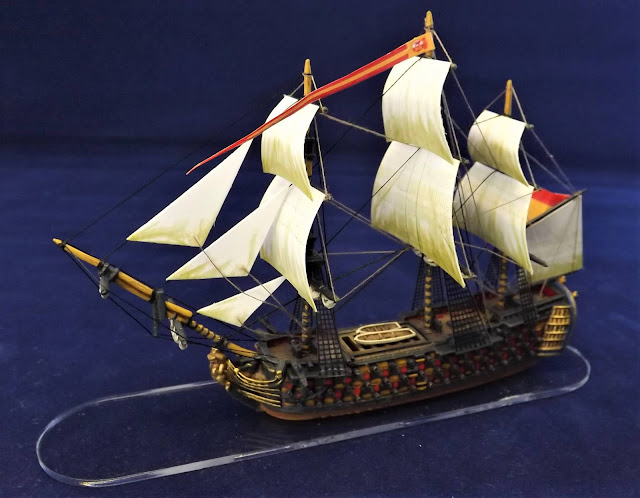 At Trafalgar Rayo would be under the command of Commodore Don Enrique Macdonell, an Irishman who left his country to fight against the British at the age of eighteen, initially joining the Spanish Army, and the Regimento de Hibernia, with which he served at the siege of Gibraltar before transferring to the navy.
Having spent time serving with the Swedish navy, Macdonell was, at the request of Admiral Gravina pulled out of retirement to command the Rayo at Trafalgar, making him, with his eight previous active commands one of the most experienced Spanish captains in the battle. 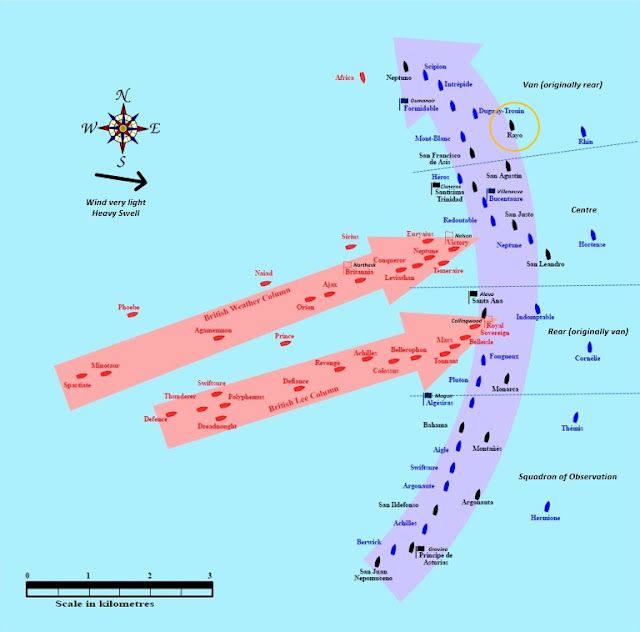 However, as the only first rate in Admiral Dumanoir's van squadron, she spent the first two hours of the battle sailing away from the action until turning with the van at about 2.00pm to go to the assistance of the centre.
It would seem though that the Rayo, along with several other ships, then turned away to the east without any serious engagement with the enemy, only too well illustrated by her staggeringly light casualties of four killed and fourteen wounded, with some sources alleging that she was the only ship at Trafalgar not to fire a single shot. 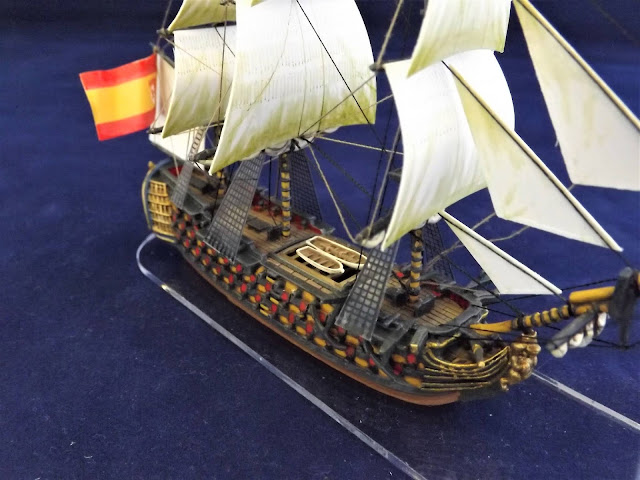 Some redemption for the honour of the ship was garnered after the battle when she joined the sortie by ships under the command of Commodore Cosmao in the Pluton to set out in the middle of the gale on the 23rd October to recover some of the captured ships, although this was thwarted by ten British ships in close attendance and saw the Rayo narrowly avoid wrecking herself as she dropped all her anchors and rolled her masts over the side to avoid destruction on a lee shore.
Her respite was however short-lived as the next day Macdonell was forced to surrender his ship to the British 74-gun Donnegal, which missing Trafalgar was on the way to Gibraltar for water, and then two days later the Rayo was finally driven ashore with her British prize crew taken prisoner but with the ship burnt on Admiral Collingwood's orders.
Sources referred to in this post:
The Trafalgar Companion - Mark Adkin
https://www.todoababor.es/listado/navio-rayo.htm
https://en.wikipedia.org/wiki/Spanish_ship_Rayo_(1749)
https://threedecks.org/index.php?display_type=show_ship&id=2666
Next up in the final showcase reviews for this project I will take a look at the 'Wooden Walls of England' as the last three British three-deckers are completed and the small ships of Trafalgar, including HMS Pickle and Entreprenante, and Steve M and I have been battling away in the Second Punic War playing Hannibal on Vassal, update to follow.
Posted by carojon at 23:37