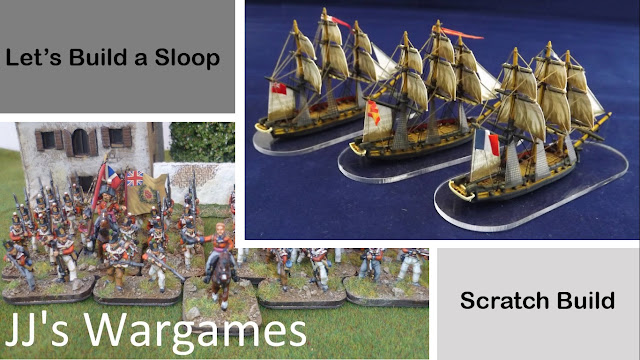 If you decide to start making model 1:700th age of sail ships from the Warlord Game collection of models you are likely to end up with quite a few model brigs which you can decide to simply put together as per the instructions, or if you would prefer a little more variety to your small-ship collection, decide to convert a few of them to a flush-deck ship-rigged sloop, sloop-of-war or corvette depending on your preferred terminology.
As a 'Brit', 'Pom', 'Limey' or 'Rosbif', I will tend to use the Royal Navy terminology of the period referring to a sloop or ship-sloop as opposed to the model instructions seen below referring to a brig-sloop, just so we are clear, or as the song goes:
'you say Tomarto, I say Tomayto, let's call the whole thing off!'
Of course you could choose to wait for Warlord to release their announced new model of a sloop as recently shown on Facebook with a look at the computer designs for the upcoming model.
However even with the eventual release of this model sloop, this conversion will still allow the collector to field a flush deck variant with a complete single open deck of guns, versus the new model with quarterdeck and forecastle, quite useful if you are building a collection around the US Navy and American and British ship-sloops on the Great Lakes, that tended to have this single gun-deck layout.
Having turned my attention to working on the excess of small ships I have accumulated during the work to build my larger fleets of ships of the line, I decided to add to the sloop conversions I have built previously to allow enough of these useful little ships to model specific historical encounters and cater for some of the other smaller nations such as the Dutch or to have some Early Revolutionary War French versions.
Since building those first conversions I have had queries posted to me here on the blog and other forums about precisely how these models were built and how to go about it and even the colour schemes I select for them, and so I thought I would attempt to cover off these points as I go through the process of building six sloops which will add to the models I have as outlined above. 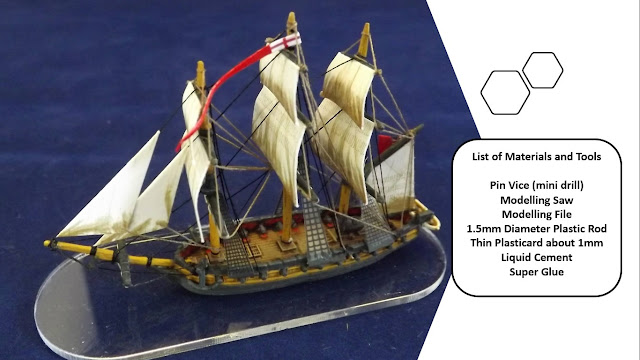 Based on the principle that a picture is worth a thousand words, and very often a video only helps the process I have put together a short video tutorial that shows my build process for constructing the sloop from two brig hulls, adding a new mainmast and associated channels and rigging anchor points before finishing with a coat of primer.
In the second post on this build I will showcase the painted and rigged models and discuss how I decide on the look of the models and my colour selection choices, with of course the usual invitation for comment and questions either here on the blog or other forums to help clarify the process and make it as easy for those who want to, to have a go.
For checking out my original basic colour choices you can follow the link to this video clip from when I first reviewed these models and my ideas for using them.

For Rigging these models just follow the links to my three video tutorials covering standing rigging, British and American running rigging and Other (French, Spanish, other Navies) running rigging.

Apologies for some shaky camera work during the preparation of the hulls and I hope you find the video useful.

I have had problems linking the YouTube Video clips from the channel, and can't find a solution as yet.
If you can't see the video links then please follow the link to the JJ's Wargames YouTube Channel where 'Let's Build a Sloop' and all the rigging tutorials can be followed.
More anon
JJ
Posted by carojon at 23:56