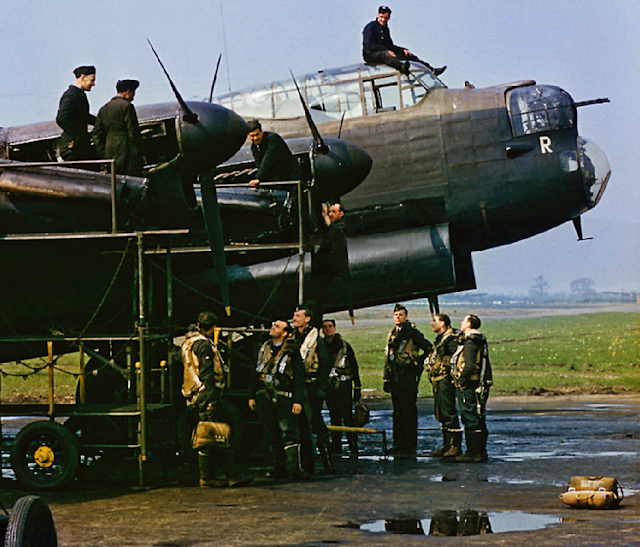 Next month at the DWG I will be picking up where we left off in our Target for Tonight (TfT), Battle of Berlin Campaign, last reported here on the blog back in February 2020 with our sixth of eight planned linked games recreating the early attacks made by Bomber Command in late 1943, heralding what historians would refer to later as the Battle of Berlin.
I had been playing TfT for a number of years prior to the launch of the new look rules from John Curry and had been dabbling with the idea of putting together a group level campaign game back then, whilst expanding my collection of model aircraft to enable the larger game over that of the individual squadron, outlined in the original game.
The idea behind the campaign is to provide a framework around a very neat set of rules that models the crew experience of flying a night bombing operation over occupied Europe, that includes ops planning at the group level of Bomber Command, rather than just individual squadrons, together with the inclusion of target planning, target marker selection by weather conditions and placement over the target, bomb lift and fuel load out arrangements, for a series of linked games that measures bombing effectiveness against planes lost and aircrew casualties, and to test the rules before putting them out there for others to have a go with.
As well as the Battle of Berlin, the campaign game system should allow us to look at the earlier Battle of the Rhur Valley Campaign, with the focus very much on Bomber Harris' period in command from the early one-thousand bomber raid on Cologne and the inclusion of the twin-engine Wellington bomber, still very much a key part of Bomber Command's Mainforce, until replaced by more four-engine types, and retired from the long range raids into Germany that included Berlin.
The first six games, covered in the links below, have seen Bomber Command's victory point lead gradually clawed back by the Nachtjagd through a combination of casualties inflicted and some indifferent bombing caused by the bad weather that helps to mask the bombers at night but can make accurate target marking difficult.
The situation, as we prepare to play Op-7 to Hannover recreating the attack by 678 Bomber Command aircraft on the night of 27th-28th September 1943, sees the current state of play standing at a drawn campaign with the headline report, 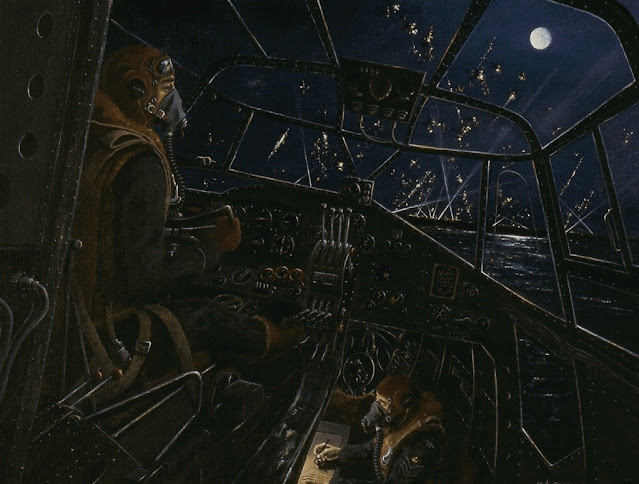 'Mounting losses cancel out the effect of the bombing'

Op 1 - Berlin, 23rd-24th August 1943
Op 2 - Nuremberg, 27th-28th August 1943
Op 3 - Berlin, 31st August-1st September 1943
Op 4 - Mannheim, 5th-6th September 1943
Op 5 - Hannover, 22nd-23rd September 1943
Op 6 - Mannheim-Ludwigshaven, 23rd-24th September 1943
The narrative captured in the game reports comes from that generated in the games we play, with the players carefully noting the details of losses sustained in their respective groups, combined with heroic fights, bringing badly damaged aircraft back having sustained damage early into the flight, still continued on to the target and then limped home, dealing with navigation errors, flak and the hazards of landing after a long tiring flight in freezing temperatures.
In addition to managing their respective aircraft through each leg of the flight too and from the target, combatting intercepts, when possible, by enemy nightfighters, the players also assume the role of Group Commanders and higher command, deciding on the bomb lift and fuel load out combination for the groups and the mix of bomb load.
Before the squadrons set off into the night the players have to decide on the numbers of 4,000lb 'Cookie' High explosive bombs to take, designed to take the roofs off large areas of residential, military, transport and industrial zones alike, accompanied with more small high explosive bombs and incendiaries better suited to starting mass fires to further extend the damage caused to homes, factories, rail yards and dock yards, with the Halifax, Stirling and Lancaster better able to carry different loads and thus compliment one another.
The 'bomb lift' is simulated by a number of bomb type tokens being put into a cup, based on the decision to take a particular load and mix. These tokens are then drawn blind by the players as their bomber model completes its bomb run over the target, and placed on the target board and recorded on the target map along with those of other aircraft, with any drift of the TI's calculated at the end of the game to see where particular bomb types had actually fallen and the outcome, with multiple and specific bomb types liable to generate fires adding to the destructive effects and which will generate a victory point calculation at game end.
Of course planes shot down or who turn back prior to the target reduce that bomb lift, with tokens taken out of the cup in the required numbers according to the bomber type lost from the op.
Once the plan is decided on and the aircraft are off, all that planning can be for nought as the nightfighters, the weather and simple good or bad luck takes a hand in deciding the outcome of each game and with the return of surviving bombers, the gathering around for crew debriefs at the game end to assess the results of the bombing, offset by the losses in crews and aircraft and the overall effect on the outcome of the campaign.
I should add that, rather like the crews themselves, the players have no idea of the efficacy of their attacks until the accuracy of their bombing with that of the target marking, aligned with the map of the target, reveals the result, all adding to the final piece of drama to all the decision making that preceded, and adds a little more effect to the overall game that Target for Tonight creates and I think explains why this air-game is so different from the normal whirling-turning-shooting air games that seem to be the norm and why it is a game I have kept coming back to since its publication.
So next month we will pick up where we left off and resume our campaign, never forgetting while we play the sobering thought that the game simulates Bomber Command's huge contribution to ridding the world of Hitler and his evil regime, and paying a terrible price while doing so in young men's lives; with the loss in aircrew amounting to some 55,500 men, killed in the air or as prisoners of war, in flying or ground accidents and in ground-battle action, with 8,325 aircraft lost in action, and of course the German civilian casualties that will probably never be known accurately, but with numbers ranging from 350-500,000 and as much innocent victims of the Nazi's as other civilian casualties caused during five years of total war.

In the lead up to planning our next game I happened to come across a very interesting recent presentation by the Imperial War Museums which looks at the development of the Avro Lancaster bomber and includes a detailed look at the example held by the museum at Duxford and is well worth a watch to get a feel for the conditions a Lancaster crew could face flying in the dark skies over wartime Europe.
As usual a full AAR of our next game will follow on the Devon Wargames Group blog with a linked posting here on JJ's.
For those interested in learning more about Target for Tonight, the Facebook Group focussed on the rules would be a good place to start.