With the Trafalgar collection of 1:700th model ships completed and additional Franco-Spanish models now done, I decided to have a slight break from all things nautical and finish off a bunch of Perry Miniatures that have been seemingly glowering at me from the back of my painting table for the previous two years as I have worked away at various 1:700th men-o-war.
It's been a while since I reported on my AWI collection for the reason mentioned and looking back on previous posts it was May 2020 when I finished off my mounted officers and October 2019 when I finished work on my first groups of Butlers Rangers and Mohawk Indians.
These groups of British regulars, Mohawk Indians and American militiamen had been primed and sitting patiently on their paint sticks for two years when I carefully removed a layer of dust to begin working out the skills of painting a 28mm figure again.
So first up are my mixed group of British regulars representing elements of the 8th and 34th Foot who added an element of solidity to many of Governor Sir Frederick Haldimand's expeditions down the Mohawk and Champlain valleys.
Alongside the 8th and 34th foot were the regulars from the 29th, 53rd and 84th Foot all operating from their bases in Quebec and Fort Niagara as well as soldiers from the 4th Battalion, Royal Artillery and I intend to feature these with additional British regulars from the Perry's metal range in a later post. 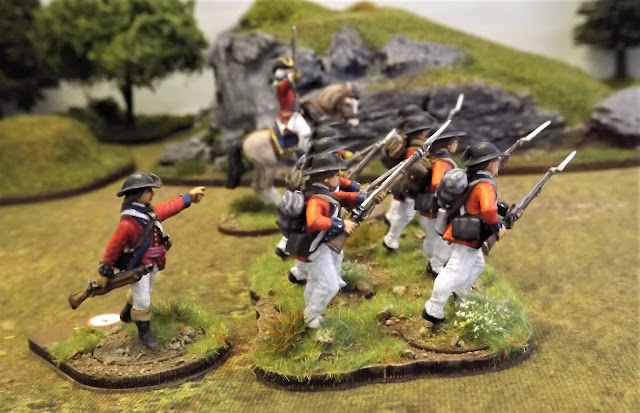 Of course the principle reason for focussing on these two regiments initially is that they formed an approximately one-hundred and fifty man unit as part of Captain Thomas Scott's (53rd Regiment) command at the Battle of Klock's Field on October 19th 1780 in the centre of Colonel Sir John Johnson's line and an action I'm quite keen to replicate at some time using Sharp Practice. 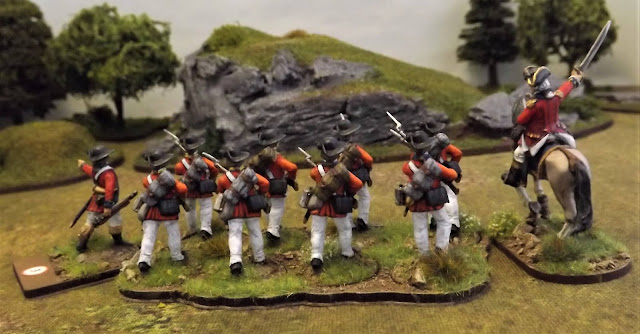 Captain Scott's force will eventually consist of two groups of eight regulars, a Royal Artillery light gun and crew and light mortar and crew, both of which ended up being left in the retreat of Johnson's little army, with the raid having successfully achieved its key objectives and with the extraction of his troops the last step to its completion, but necessarily needing to move fast to break contact. 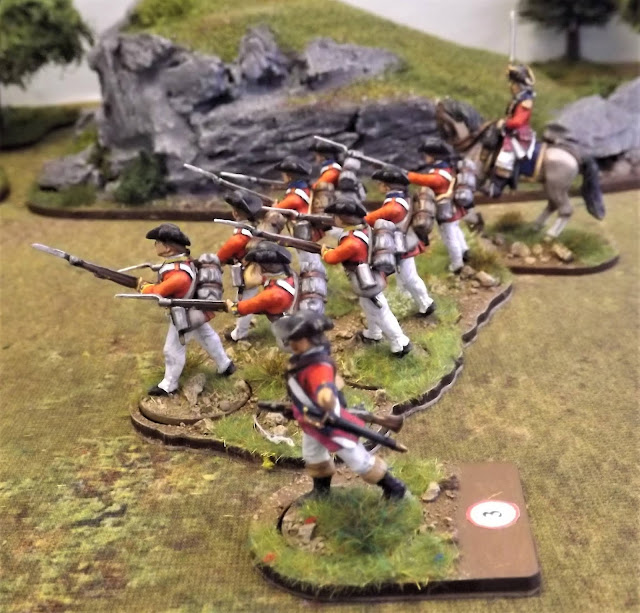 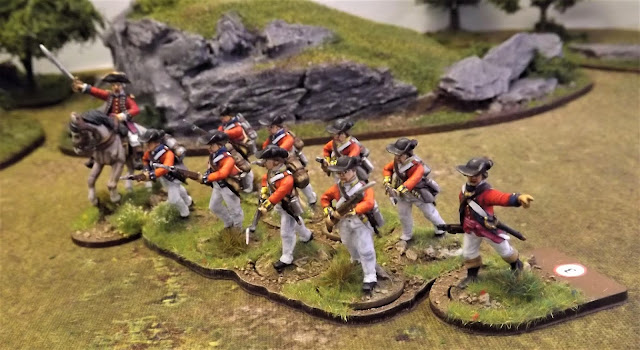 In addition to my new group of British regulars I have added two more groups of Mohawk Indians which will eventually form a raiding force of seven such groups to work as a powerful force of Indian skirmish groups able to use the new rules to better replicate Indian style warfare using Sharp Practice.

The original Sharp Practice II sees Indians grouped in warbands of twelve warriors and models their combat methods similar to a Zulu Impi, but from my reading this does not model the methods of North American Indians of this era, with a preference to mass skirmish tactics demonstrated, happy to reinforce success, but just as happy to rapidly withdraw in the face of determined resistance only to return to attack a weaker point of the enemy line. 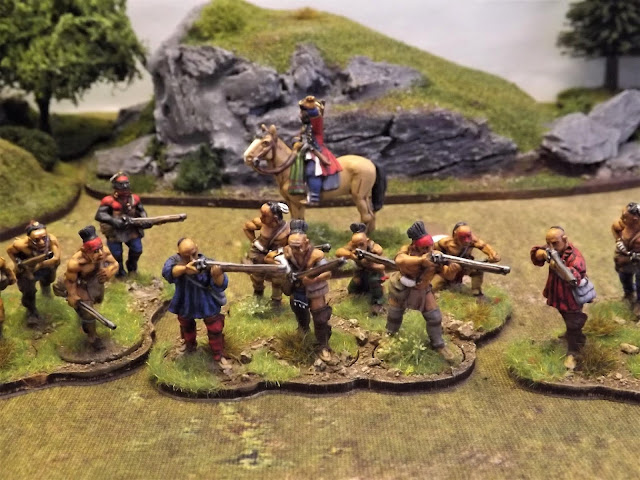 In addition this large Indian force has a much greater reliance on leadership to motivate the warriors to press an attack with more lower rank leaders bolstering the command of more senior chiefs, giving a solidity to the force but counterbalanced with a brittleness modelled with the ill effects of losing a senior commander.
With the use of Tomahawks and Buck and Ball rules, it should make these warriors a formidable foe when it comes to 'fisticuffs'. 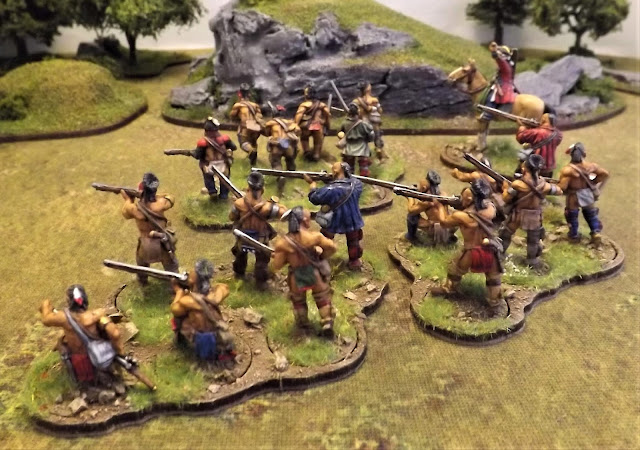 I'm really looking forward to seeing how a large group of Mohawks can go about their work on the table and the ability to add in the odd group of Butler's Rangers or British light infantry seems to me to offer the Crown player a really interesting and different light infantry raiding force. 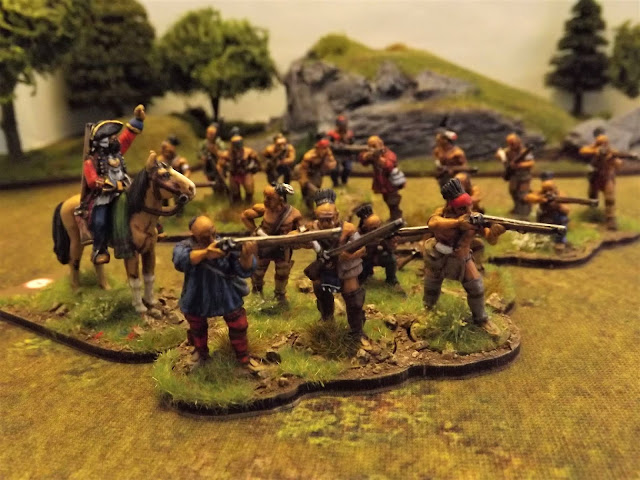 Once the Crown forces are complete, I will turn more fully to building a strong force of American militia representing the various companies of the Albany and Tryon County Militia. 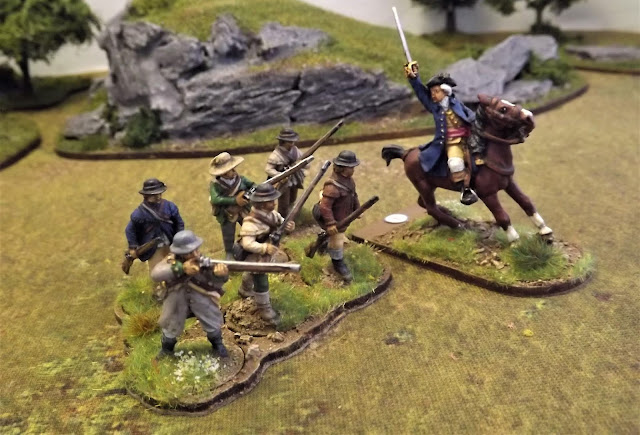 I am still working through my ideas on how best to capture the look of these troops, representing men of military age not on active service with the Continental Line or State Levies, but who were expected to enrol in their County Militia Regiment.
Here I have added a couple of Perry metal 'Northern Militia Firing Line' options to the plastics I had put together for another project and I quite like the mix. 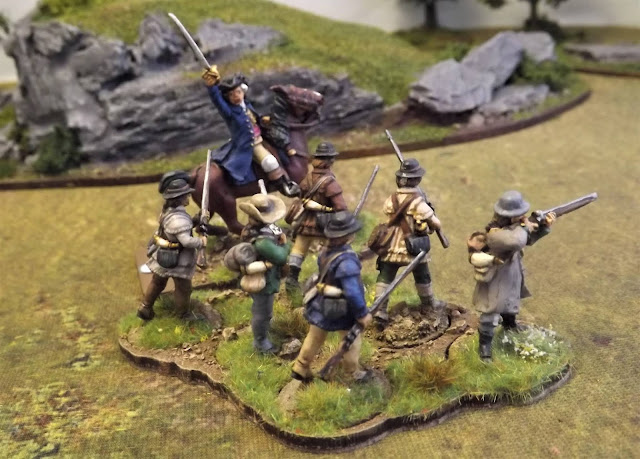 I will paint up the other four figures, some in cocked hats, to see how these units of ten figures will look, with a plan to build ten such groups to represent the Rebel army of General Robert Van Rensselaer at Klock's Field.
In addition to the metals I have an idea to copy the Perrys idea of adapting their plastic Continentals mixed with a few hands and hat options from their British plastics to produce yet more variety in my militia forces.
The American player will have the options of fielding Raw, Experienced and the odd Veteran militia force to represent the local forces that attempted to resist the Crown raids. 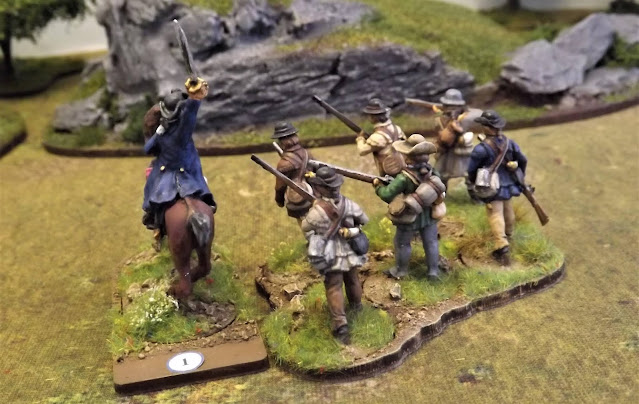 Once the bulk of the militia force is completed I also intend to add a couple of eight figure groups to represent the State Levies of New York who will add a semi-regular stiffening to the Americans and will complete the collection with a few cameo groups of American civilians defending their farms and homes and some camp followers and wagons for those scenarios needing those elements.
I also have a large collection of Sarissa MDF North American buildings to work on that will provide my raiding targets and I have my eye on a very nice frontier fort/stockade,  so there are lots of ideas to complete the collection and with a trip to Warfare at Ascot later this year, an opportunity to get some of the models still required.
Finally I am really pleased with my low profile sabot bases from Supreme Littleness Designs
Michael Scott has come up with some really unique sabot offerings with the irregular shaped edges, slightly less so and more squared off for the eight man regular offering and the great commander sabots that allow the number of the officer to be clearly but discreetly displayed, but best of all, with card base to the mdf sabot giving an excellently discreet multiple figure base which, to my eye, is much less clunky and noticeable than with some other offerings available.
The key word for me is discreet as I am aiming to minimise any distraction to the eye from the figures themselves and theses sabots are excellent at doing that. 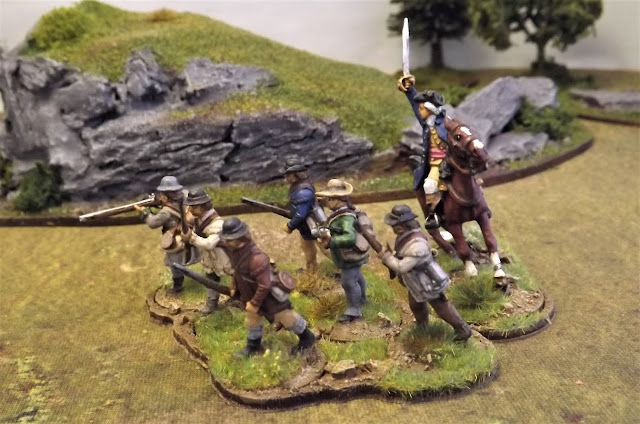 So next up on JJ's, I'm concluding my reading of an excellent book on the Roman conquest of Britain and will post my thoughts soon, plus the next painting projects are underway with a 28mm Viking group of figures waiting to be done for Steve M and back to the ships with some additional small vessels including Schooners and Cutters, before I get on with the two outstanding Spanish first-rates for Cape St Vincent.
More Anon
JJ
Posted by carojon at 02:00