As mentioned in my last post looking at the Jaegers and militia that were added to the Mohawk Valley AWI collection, my attention would be turning to Rebel militia units and State Levee companies that formed the principle defence against attacks by Crown troops and Indian allies.

As anyone who has built a collection of AWI figures using the Perry range of miniatures will know, the range of militia offerings is somewhat limited given the range of civilian attire these chaps likely turned out in and the need for plenty of pose options to give that very irregular look of militia that you don't associate with regular troop types.
Which started me thinking about how to best represent these troops in my own collection and get those variations in the look I was after as I experimented with a few metal and plastic Perry figures while I concentrated efforts on my Crown forces.

Interestingly the Perrys faced a similar challenge when they were building forces for a planned AWI campaign they later ran and posted an article on their Facebook page that was just the solution I was looking for and I have posted the results of the first stages of that option, namely to create my militia from the AWI American Continental Infantry box set with the use of extra variation provided by the British Napoleonic Infantry plastic box set.
You can see an example of their build project in the header picture and is exactly the look I'm after for my Albany and Tryon County boys, and the other pictures show the various combinations I have come up with so far, using this idea, ready to be painted once I've finished Bob's ships which are in the shipyard as I write. 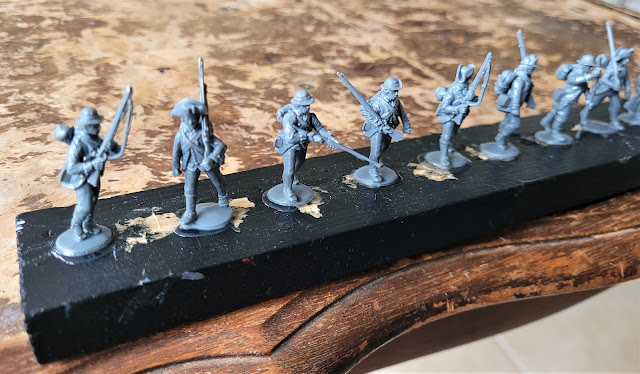 I added to the suggestions on how to build these chaps by, as directed removing the lace and shoulder wings from the British arms, but also carefully removed any show of the bayonet scabbards that would have been Continental apparel.

Likewise I have added in the hunting shirt options included in the Continental box set to add yet more variation to the coat and waistcoat sets, and a good mix of hats further helps add to the irregular look.

I really love the options that plastic figure sets offer the gamer and with a judicious mixing in of the odd metal figure from the Perry offerings I aim to have ten units of twelve figures in no time to complete my Rebel army for Klock's Field.
More anon, when I look at the plans at this and the other collections in my New Year's Eve annual review.
JJ
Posted by carojon at 10:44