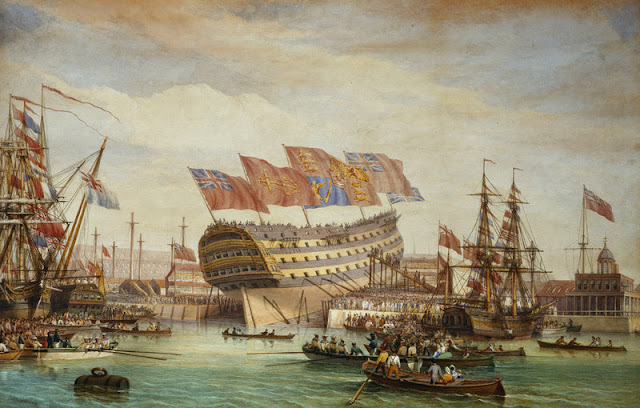 It was nearly two years ago that I first started work on the Warlord Games Black Seas British Squadron box set of model 1:700th ships, which comes complete with a British first rate, three third rates Colossus, Ajax and Mars and three fifth rates, Euryalus, Naiad and Indefatigable plus some brigs and a set of gunboats.
However in 2022, JJ's Shipyard is contracted to build a squadron for a foreign power, and Bob has commissioned me to put together a British and French squadron to form the core of his own collection, which I plan to build in between projects of my own.
Thus with the completion of my AWI Jaegers over the Xmas break, I immediately popped the box on the British squadron and had them primed before New Year to begin work on them in the January and this week the build moved into the fitting out yard where the models get rigged and have their colours attached.
With regard to my own collection, I only have a few smaller models to add and am really 'treading water' on new builds until Warlord release their new models and while I work up playing the large battles that the current collection was designed for.
The big battle practice started this month with the Battle of Cape Finisterre scenario played at the Devon Wargames Group meeting and I am now in the process of putting the final touches to a 225th anniversary playing of the Battle of Cape St Vincent, also at the club using Kiss Me Hardy, alongside a campaign to run a series of games through this year.
In the meantime, whilst looking to share some love with other collections of figures, I am keen to bring to the table, I thought the love could go a bit further by helping mates to complete their own collections of model ships, whilst allowing me to keep up my painting and modelling skills for these kits which I will need for the Dutch.

So the next time I feature Bob's British Squadron it will be to cheer them down the slips with a jaunty rendition of God Save the King before getting the band to brush up on their version of La Marseillaise in preparation for a similar French Squadron build.
The All at Sea theme will also include a look at the planning and preparation that has gone into putting the Battle of Cape St Vincent project together which has included much fun sorting out which Spanish ships were actually there!
More anon
JJ
Posted by carojon at 00:13