A brand new year started at the Devon Wargames Group this weekend and with a lot of optimism that slowly but surely things are and will get better, with at least the hope this year of getting a full calendar of events completed at club this year when compared with our late start last year
Keen to carry on playing games with my own lockdown project, the 1:700th collection of Napoleonic ships, I ran a Kiss Me Hardy (KMH) Scenario from the Too Fat Lardies Summer Special of 2006, entitled 'An Opportunity Mist' recalling the difficult visibility conditions that accompanied the somewhat indecisive Battle of Cape Ferrol or perhaps more commonly referred to as the Battle of Cape Finisterre or 'Calder's Action' fought in the summer of 1805
If you would like to see how this game turned out then you can follow the link below to the club blog to see an AAR of our game.
This post is designed to throw some light on to what led up to this battle and its aftermath.
On the 7th July 1805, HM Brig Curieux arrived in Plymouth, having been sent by Admiral Nelson from the West Indies after his fruitless pursuit of French Admiral Villeneuve's, Combined Fleet, there from the Mediterranean, carrying the latest news of the whereabouts of the enemy fleet, updated by Captain Bettesworth, commander of the Curieux, who had seen Villeneuve's fleet standing to the northward, some 900 miles north-north-east of Antigua on his voyage home and thus indicated they were heading towards the Bay of Biscay area rather than back to the Mediterranean, as Nelson had suspected.
Bettesworth hastened to the Admiralty in London, arriving late on the 8th July, to find Lord Barham, the First Lord had retired to bed and no one dared wake him, leaving his Lordship furious the next morning to find that seven to eight precious hours had been lost.
Without waiting to dress, he jotted down a note of what he considered should be done, stating;
'My idea is to send the intelligence direct to Admiral Cornwallis (Commander Channel Fleet) who may be directed to strengthen Sir Robert Calder's squadron with the Rochefort squadron and as many ships of his own as will make them up to 15, to cruise of Cape Finisterre from 10 to 50 leagues to the west. To stand to the southward and westward with his own ships, at the same distance for 10 days. Cadiz to be left to Lord Nelson.'
Barham had decided to strengthen his forces at the likely decisive point designed to unhinge French plans to dominate the English Channel by decisively defeating and destroying one of their key squadrons, that of Villeneuve, at the expense of abandoning the blockade of Rochefort. However he failed to clearly reveal this intent to Cornwallis who clearly failed to recognise the importance of Calder's mission by informing Stirling and thus Calder on his arrival.
On receipt of this new information, Cornwallis immediately ordered Stirling to join Calder which he did on the 15th July and as soon as the French in Rochefort realised that Stirling was no longer blockading the port, Captain Zacharie Allemand led his squadron to sea bound for Ireland in compliance with his orders to create a diversion. Napoleon had changed these orders, wanting Allemand to rendezvous with Villeneuve off Ferrol, but his new orders arrived after the French squadron had left port and thus Allemand would not take part in any of the upcoming actions.
Barham's planned interception took place almost on the exact position predicted on the 22nd July with the advance squadron of Calder's fleet consisting of the frigates Egyptienne, Sirius and the 74's Defiance and Ajax out ahead of the fleet in two columns, when, towards noon, the mists parted to allow men in the crosstrees of HMS Defiance to spot strange sails far to the south-west.
Captain Richard Durham and his officers excitedly scanned the horizon with their telescopes, identifying the strangers as the enemy and signalling first twenty-four, then later twenty-seven ships of the line and frigates in sight, and Calder ordered his fleet to bear to the south-west and clear for action.
With sixteen miles separating the two fleets it would take a further five hours sailing at about three knots in the slight breeze before the closest ships would be near enough to open fire. 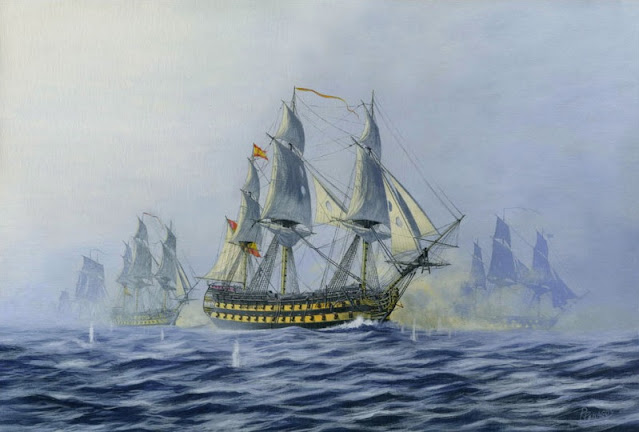 It was not until 13.00 that Villeneuve's lookouts on his leading frigates reported the approach of the British fleet of twenty-one sail at which the French admiral hoisted the signal for his three columns to form a close hauled line of battle on the Spanish leeward squadron led by Admiral Gravina in the Argonauta 80-guns.
The decks were cleared for action and the ships closed up to half a cable (100 yards), riding a heavy swell and passing through thick patches of fog, that only parted sufficiently at 15.30 to allow both commanders to get a longer and more informative look at each other.
At about 16.30 Calder appreciated that if he maintained his current course, with the two fleets only about eight miles apart and with the Combined Fleet heading north, the enemy might escape and so he signalled the fleet to tack in succession and come round onto a northerly course, surprisingly he did not consider tacking together and thus speeding up the whole progress to the north.
At about the same time as Calder ordered his fleet to head north the British frigate Sirius 36-guns, operating well ahead of the fleet, found herself at the rear of the Combined fleet heading towards the French frigate Sirene, herself towing a captured treasure galleon, reportedly valued at 15 million francs; a tempting prize for Captain William Prouse who on closing with the Sirene came under fire that so alarmed Villeneuve that his rear was under attack caused the French admiral to order a change of course by wearing south, back towards his rear, thus causing both fleets to return to approaching each other from opposite directions.
The change of course had a sobering effect on Captain Prouse aboard the Sirius as his attempt to seize the treasure ship was abruptly halted with the looming shape of the 80-gun Argonauta suddenly bearing down from out of the fog and causing the British frigate to make a hasty retreat, with the Spanish honouring the code by not firing a single shot at the much smaller British ship.
However the Argonuata soon found herself otherwise engaged as at around 17.30 the 74-gun Hero under Captain Alan Gardner complying with Calder's signal to 'engage the enemy more closely' yelled to his ship's master to tack immediately to larboard, thus bringing his starboard battery to bear and followed by the following ships in the British Van Squadron and from which position our game progressed, as seen below.
The rather confused and certainly indecisive battle that followed would last about three and a half hours with the firing ceasing at about 21.00 with the failing light and gloom together with Calder's signal to break off combining to bring the fighting to a close; with the Spanish squadron having taken the brunt of the action, with Villeneuve's own flagship Bucentaure only suffering six casualties and the eight ships behind her taking no real part in the fighting.
The Spanish would see two of their ships captured, and 1,200 of their men taken prisoner whilst most of the 480 casualties were among their surviving ships a fact that would lead to much recriminations between the allies afterwards and see Villeneuve make a dramatic reorganisation of his squadrons to include both French and Spanish ships when they next met the British under Nelson off Cape Trafalgar in October.
Both admirals claimed success, and indeed Calder had captured two enemy ships with light casualties of under 200 men, with Calder's dispatch the next day declaring that it was;
'A very decisive action which lasted upwards of four hours, when I found it necessary to bring up the squadron to cover the captured ships.'
But with Villeneuve rather 'gilding the lily' by reporting;
'The enemy then made off. He had several vessels crippled aloft, and the field of battle remained ours. Cries of joy and victory were heard from all our ships.'
Calder would face a court martial, not for what he did, but rather for what he failed to do, allowing difficulties to persuade him not to resume the action in the following days, with both admirals sailing away from the area on the 25th having let each other move out of sight of each other and with Calder heading north to rejoin Cornwallis whilst Villeneuve sailed south-east for Vigo to replenish supplies and carry out repairs before heading south to Cadiz and the decisive Battle of Trafalgar nearly three months later.
Calder's trial lasted three days between 23rd to the 26th December 1805 held aboard the 98-gun three decker Prince of Wales and presided over by the Commander in Chief, Admiral George Montague delivering its condemning verdict after a rather lengthy and laborious preamble;
'the court is of the opinion, that the charge of not having done his utmost to renew the said engagement, and to take or destroy every ship of the enemy, has been proved against the said Vice-Admiral Calder; that it appears that his conduct has not been actuated by cowardice or disaffection, but has arisen solely from error in judgement, and is highly censurable, and doth adjudge him to be severely reprimanded, and the said Vice-Admiral Sir Robert Calder is hereby severely reprimanded accordingly.'
Sir Robert Calder never received another active command but was promoted to full admiral by seniority in 1810 and later appointed Commander in Chief at Portsmouth in 1815, dying in 1818 at the age of seventy-three.
Sources consulted for this post:
Far Distant Ships - Quintin Barry
The Trafalgar Companion - Mark Adkin
Naval Warfare in the Age of Sail - Brian Tunstall
The Battle of Trafalgar - Geoffrey Bennett
Posted by carojon at 01:04

Email ThisBlogThis!Share to TwitterShare to FacebookShare to Pinterest
Labels: Age of Sail, All at Sea, Devon Wargames Group, JJ's Wargames, Kiss Me Hardy