Last weekend we were travelling back from our holiday in France and staying overnight in Hythe gave the opportunity to have anther look around prior to heading back to Devon.

As I mentioned in the first of this series of posts covering our trip, the two key areas of interest that I wanted to explore more was Shornecliff Camp, the birthplace  of the famous Light Division trained by Sir John Moore and the Royal Military Canal, "Mr Pitt's ditch"; the defensive work designed to make a landing by Napoleon's Grande Armee, on the south coast closest to France, a much more problematic affair.

We did go and look at the modern Shornecliff Camp which is now home to the Gurkha's, but being an active MOD base, obviously there are no pictures, but it was great to see a place I had only read about, and get to chat to some of the Gurkha's who were great and very familiar with the history of the place, and themselves a famous elite regiment in the best traditions of the Light Division.

So it was off to find the memorial to the men that built the Royal Military Canal, the Royal Staff Corps.

The Royal Military Canal was the "brainchild" of the British Prime Minister William Pitt, as a response to the threat of invasion in 1803. The canal was built between 1804 and 1809 with the British naval victory at Trafalgar in 1805 making the work pretty well redundant during its construction.

I spent time, a few years ago, touring the Lines of Torres Vedras in Portugal and found myself amazed at the work there, done without the availability of modern machinery, and can say that on a much smaller scale the Royal Military Canal left a similar impression.

One only has to think of the difficulties the canals and waterlogged areas of Walcheren Island caused the British to see how this work combined with the Romney Marshes in front could have held up the Grande Armee.

The work on the canal was overseen by the Royal Staff Corps under the command of Lieutenant Colonel John Brown, established, only a few years prior, in 1798, to provide an engineering service for the army. This unit was small with just five companies including the HQ later increased to a full battalion in 1809.

The unit was trained and equipped as infantry and was responsible for field defences and fortifications and often worked hand in hand with the Royal Engineers. The uniform is illustrated below with the familiar redcoat without lacing on the ordinary ranks tunics and being a "Royal" formation having blue facings. In full dress they would be in blue grey trousers with short gaiters.  The Corps would later go on to greater things when attached to Wellington's Peninsula Army being involved in the repair of the famous Roman bridge at Alcantara in 1812 and the construction of the bridge of boats over the River Adour in 1813.
Sourced from the Osprey Men at Arms 204, Wellington's Specialist Troops 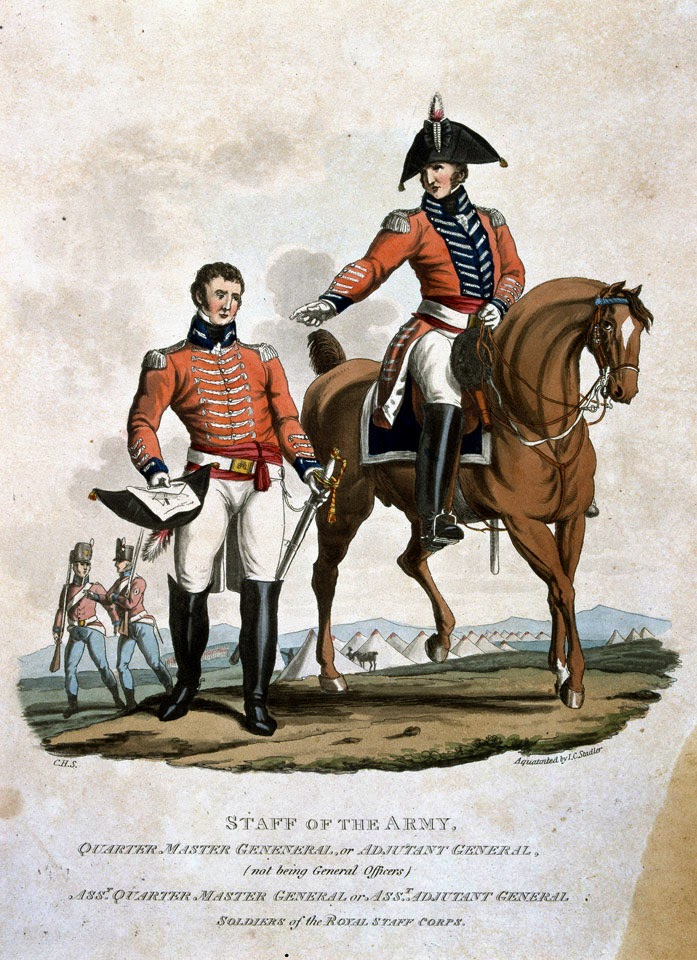 The life size figures on the monument really capture the look of these soldiers with great attention to detail. One thing I noticed was the muskets looked slightly small for the regular Land Pattern "Brown Bess".
The Osprey title makes a curious reference;
"In 1801 the Inspection Returns notes that their muskets were smaller than those in general use, unable to take ordinary ball ammunition."
So it would seem the attention to detail even extends to their muskets.

The other unit very much involved in the construction was the Royal Waggon Train established in 1799 and responsible for the delivery of supplies and materials for the project. 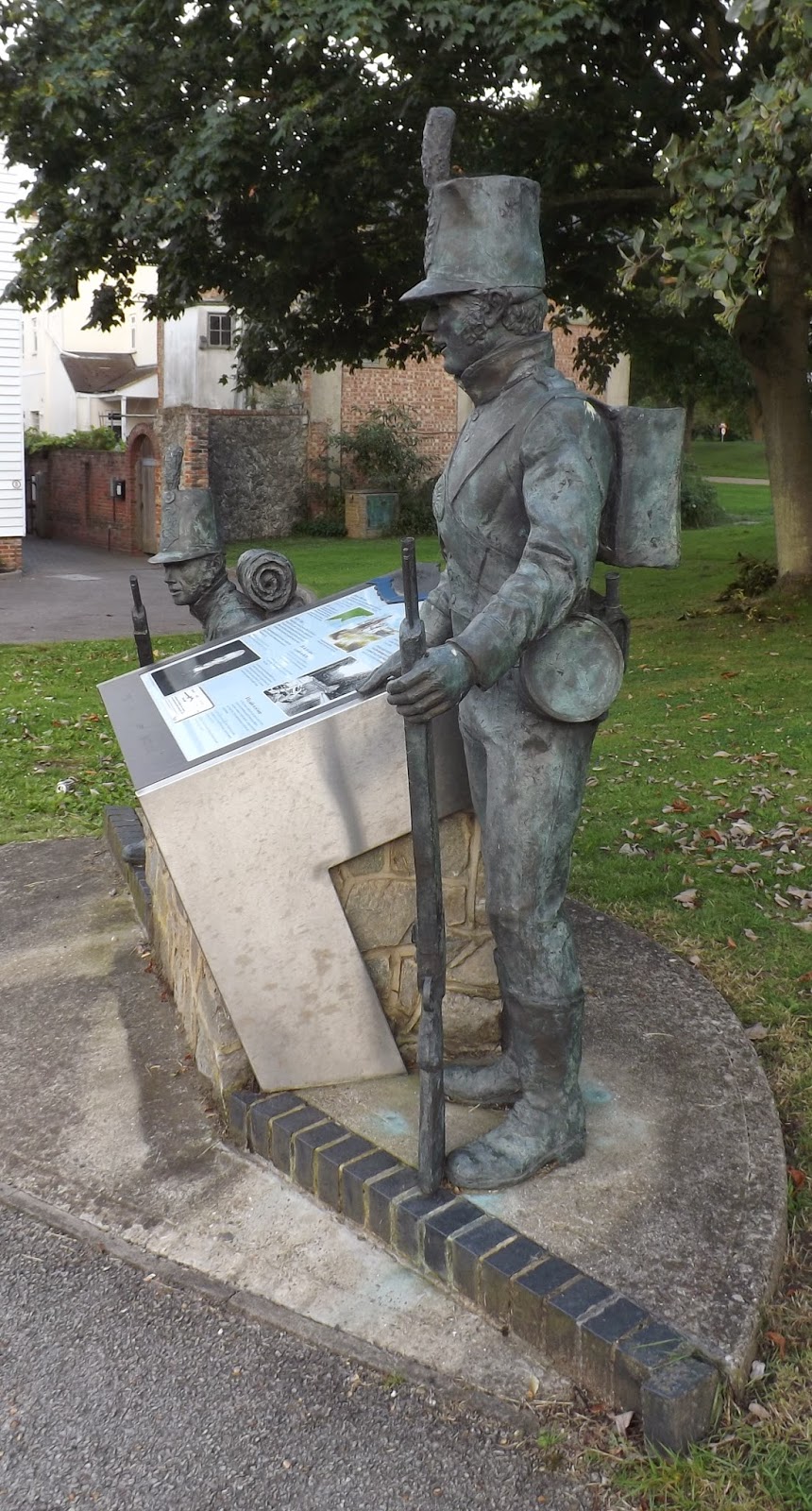 As I mentioned earlier, works such as these were done without the aid of modern machinery and at the height of its construction, in 1805, involved the labour of 700 navvies (working men who travelled the country looking for manual labouring jobs on building projects).

The second monument recognises these men and the information board stated that a good worker could shift three cubic metres of earth in a day. 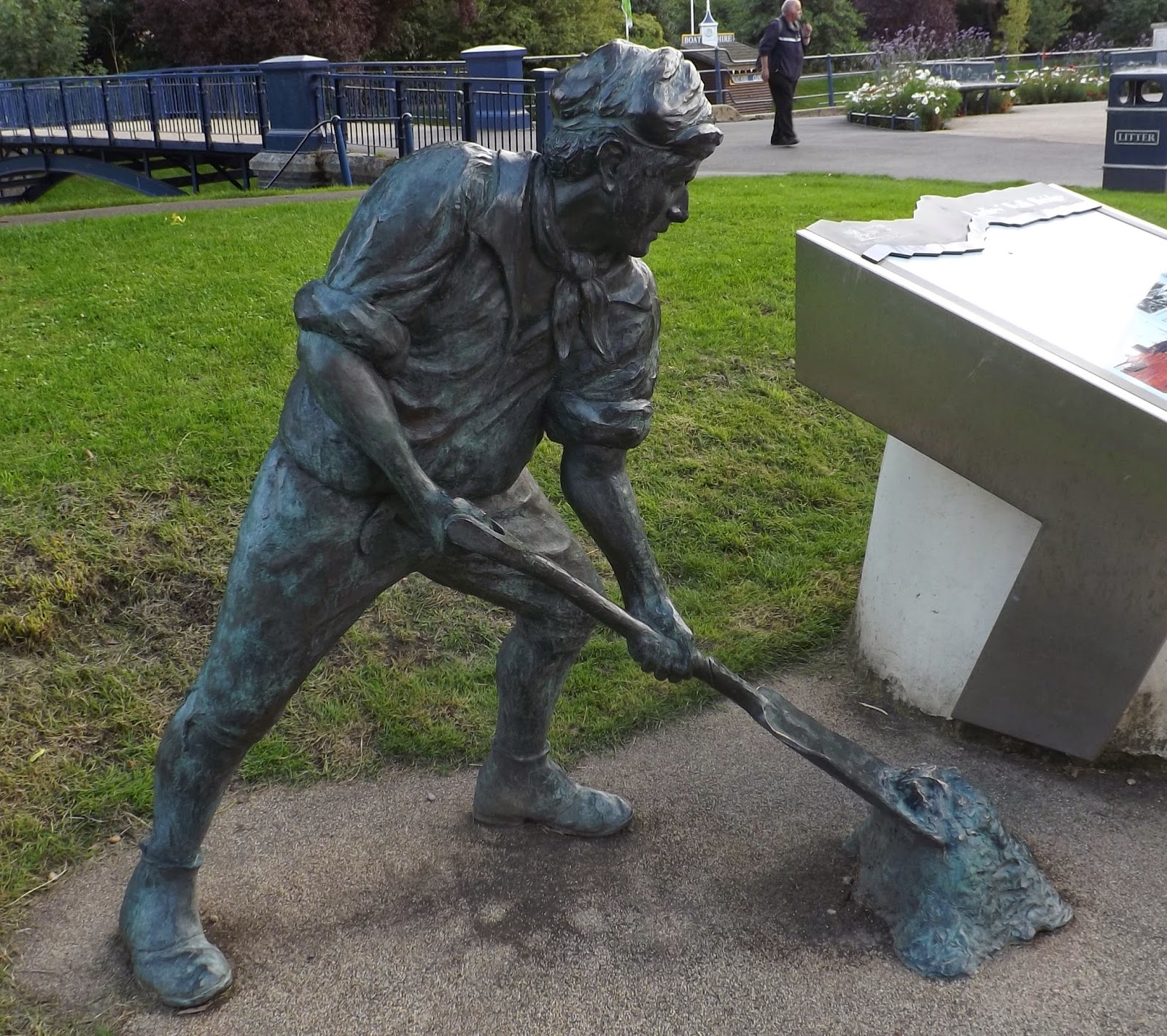 These workers faced day to day hazards in construction work of those times but also had to contend with the ditch being overwhelmed several times by high spring tides at the seaward ends of the diggings. 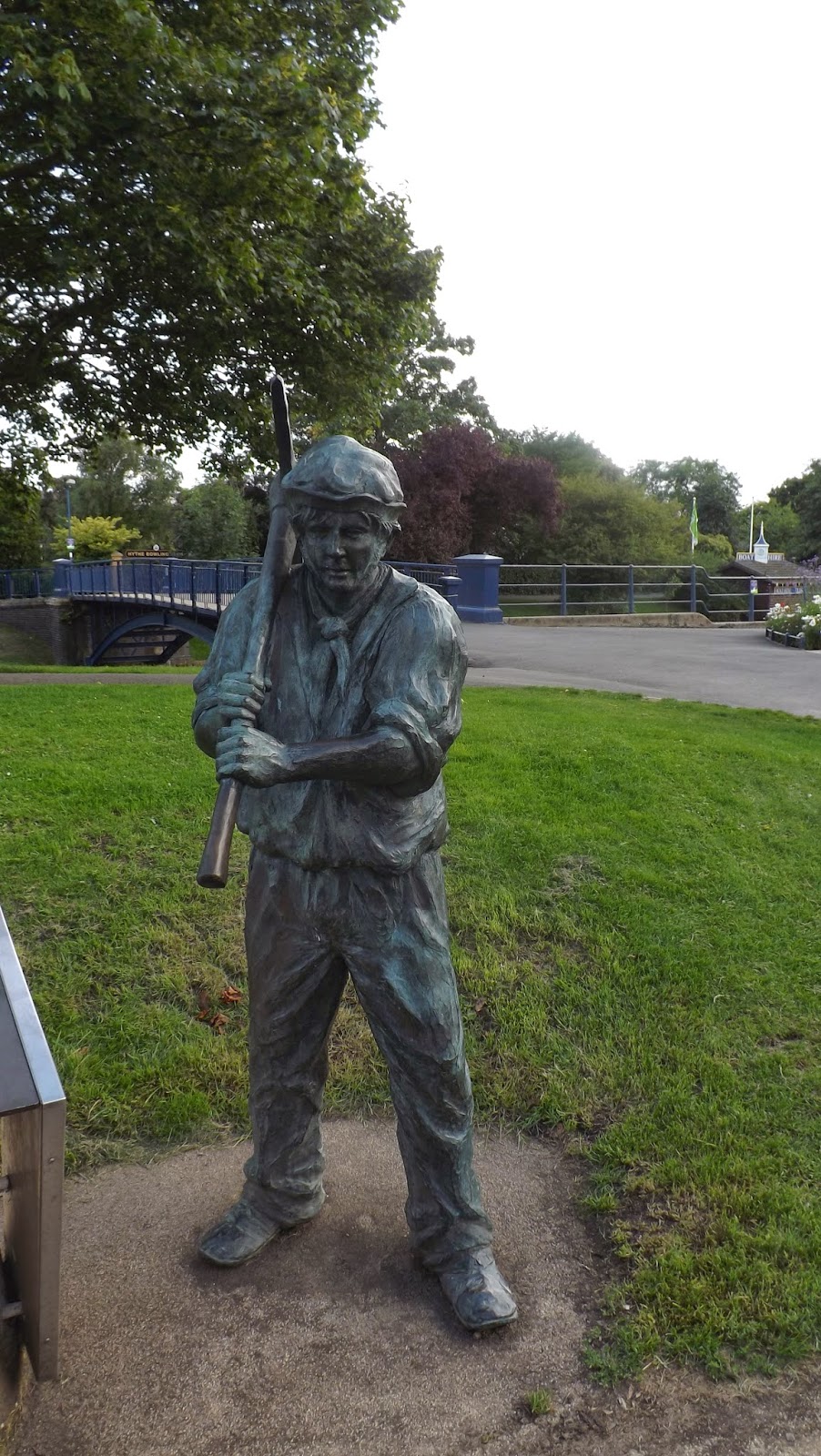 Today the former military defence is a significant asset for the local nature and a very pleasant place to walk and picnic beside. A fine monument in its own right to the men who built it over two hundred years ago. 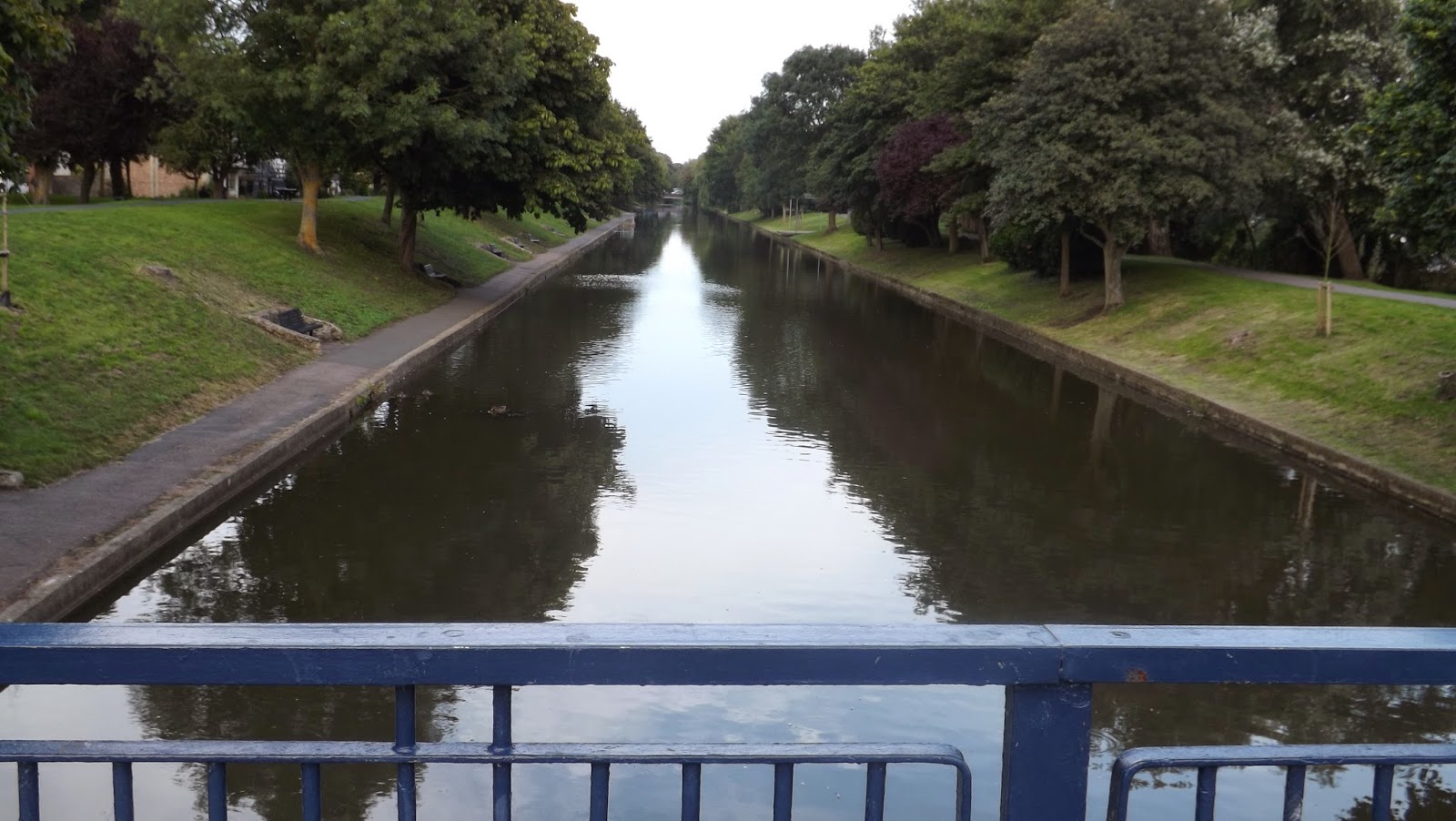 Next up, the 4th Dutch battalion in the Peninsula.
Posted by carojon at 06:21