Last night Tom and I ran our third and final play test of Casa de Salinas with a few changes to the set up and playing that produced a dramatically different result and has helped define the parameters of the game proper. 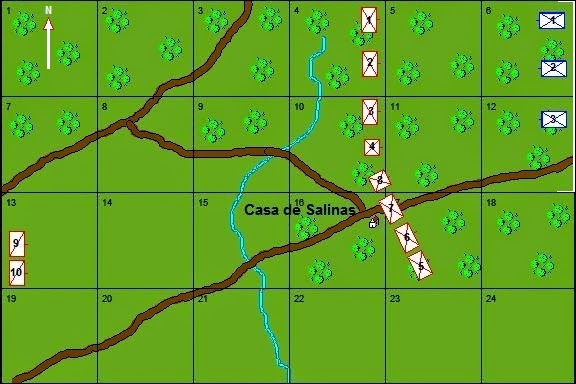 Before describing the game, I thought it might be helpful to summaries some of the "givens" in this scenario that need to be modelled to give it any semblance to the historical clash.

First, the British 3rd Division of two infantry brigades supported by a light cavalry brigade are halted at the Casa de Salinas road junction acting as a road block to the first elements of King Joseph's French army. The men in the battalions are lazing at ease on the ground, unaware that their brigade light battalion pickets have not been posted properly and those that are forward are too few and not enough to secure the front. Therefore the British, on "defend" orders, are not moving until forced to by French action, when they will retire gradually into the open terrain supported by their cavalry as they fall back on the Talavera position.

Secondly, the French approach has been undetected and coming from an unsuspected direction; looking at the map, they arrive north of the road in squares 6 and 12, when they would have been expected to be moving along  and south of the road in 12, and from the Rivers Tagus/Alberche crossings into 18 and 24.

The surprise of the attack finds the British disorganised and unable to fire off their "trademark" volley fire before several battalions have been broken in disorder leaving two to three less affected battalions to take up the fight and slow the French advance, before falling back themselves.

The British, therefore, will withdrawal, due to pressure on their position, the challenge of the scenario is in what condition they will be in when that withdrawal has finished.

Finally, the close nature of the wooded terrain around the Casa means that movement is halved and visibility is reduced to 75 paces, just short of 60 yards, so all musketry and spotting will occur very close up and personal. The terrain is ideal for skirmishers.

To model the surprise attack we only have one of the three light battalions forward of the British line, which given the historical situation should only be Mackenzie's light battalion; we have randomised it in our games to provide more uncertainty, however it has been Mackenzie's men in all the tests so far.

In addition, the first volleys, delivered by British infantry, were ineffective in stopping the French attacks and we model that by randomising down the amount of fire they are able to use.

Moving through the close woods around the Casa would normally be fatiguing to formed infantry and clearly had little or no effect on the French in the actual battle. Veteran French infantry, line and light, were at this period quite capable of operating in open order, so to avoid the fatigue effects in the four moves to contact, when we had our battalions form line, the French advance in open order. The preceding pictures show the bases slightly separated to indicate this.

To soften up the British line and adopting French tactical doctrine, the formed infantry is preceded by open order voltigeur combined battalions who will skirmish over 200+ paces beyond their unit (musket range at 200 paces and beyond is deemed where the skirmishers will operate). The picture above shows one of these combined battalions approaching the British line, unimpeded by their British opposite numbers. The skirmish attack also forces the British units to declare their positions.

The picture below shows the skirmish attack well under way with British officers and nco's being picked off by the French skirmishers making use of the cover provided by the tress, whilst the British infantry reply with poor musket volleys attempting to drive the voltigeurs off. Meanwhile the French blinds beyond show the 16me Legere getting into position preparing to advance through the voltigeurs, fire a volley and charge the British line.

The picture below, shows the voltigeurs roughing up the British line, for very little cost to themselves. Note units on defend orders can only charge with an officer attached, but the British commander is just trying to hold initially, hence General Donkin is close by, should any of his units fall back.

There are no other British Generals to aid Donkin, as his boss, General Mackenzie, is busy with his own brigade as well as being divisional CO and Wellesley has only just become aware of the firing to his left whilst searching for the French on his right. 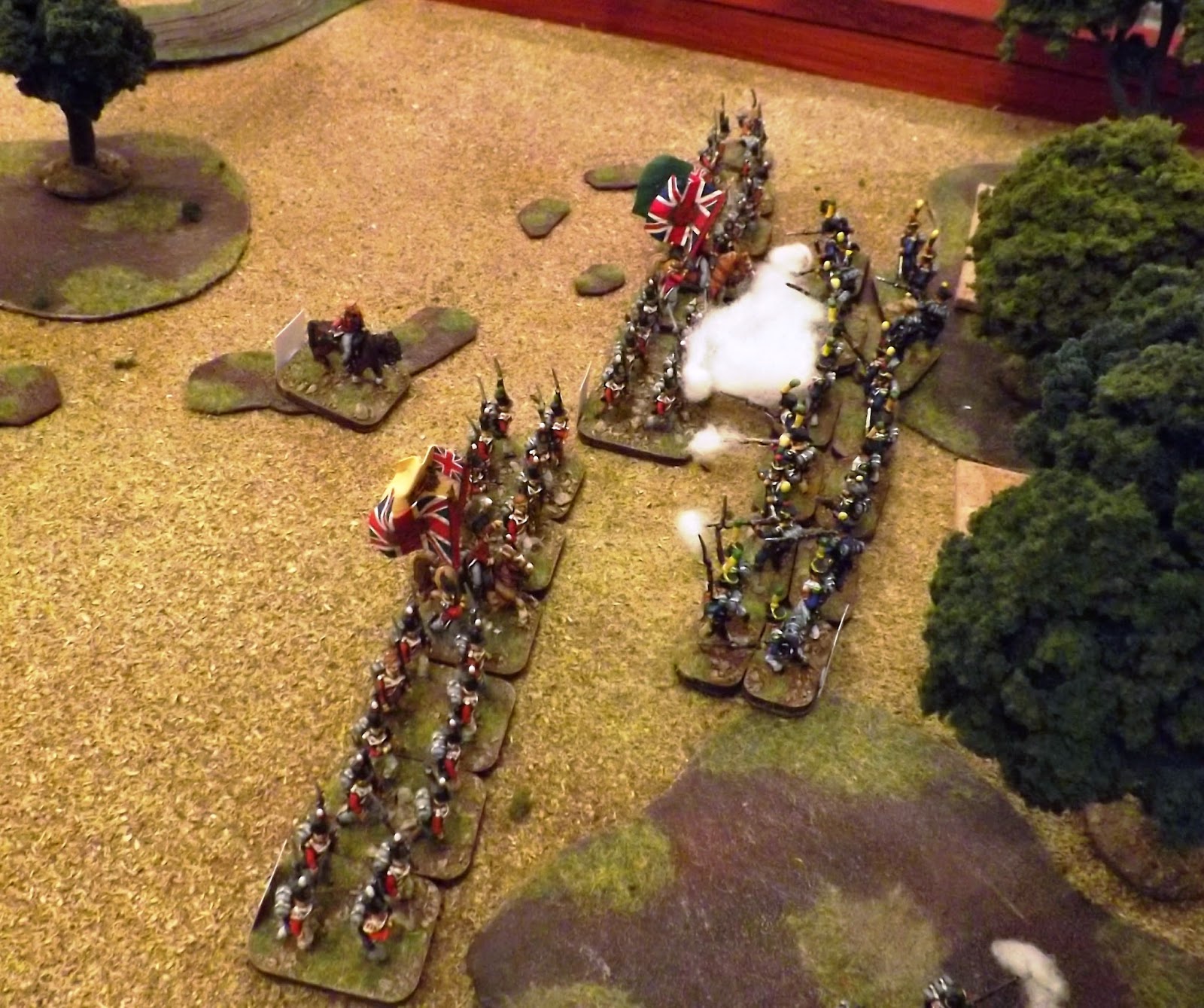 The French left presents a different problem. Eager to stop the British brigade on this flank simply retiring unhindered or moving to support Donkin's brigade, French troops under General Solignac have moved into the woods on this side of the road to pin these units.

General Mackenzie's "light bobs" are doing their job and contesting the advance of the French voltigeurs, whilst protecting their brigade from sniping. Note Solignac's follow up line battalions are in open order. 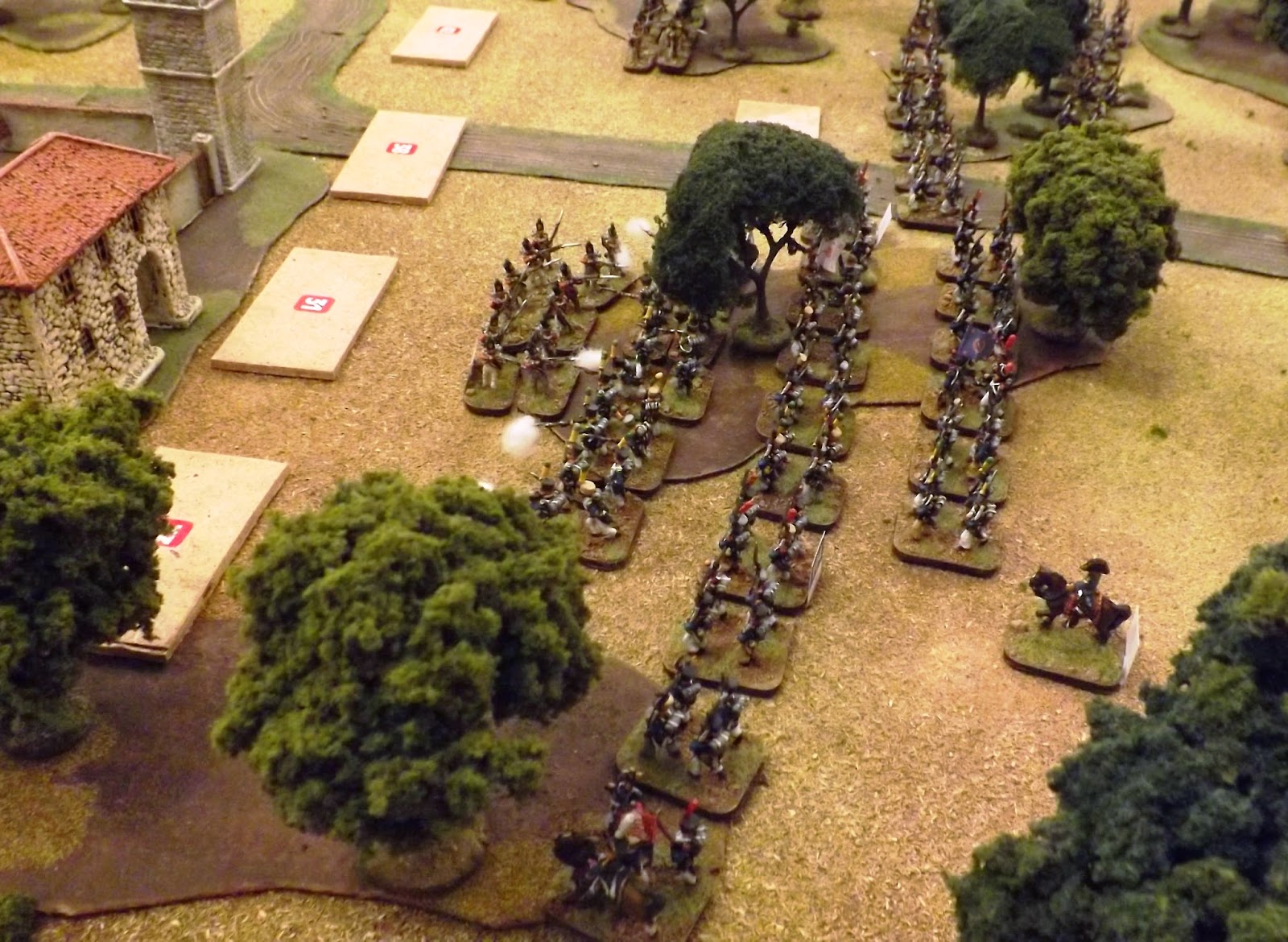 Up to this stage, the new French tactics were working like a dream. and then I, as French commander, got carried away. The picture below shows the table, when I made my mistake. Top centre, shows the French legere and voltigeurs have driven off Donkin's two line battalions in disarray, following a volley and charge by the legere. Only Donkin's light battalion and the 60th Rifles are in good order and able to cover the brigades retreat.

Nearest to camera shows my error in trying to force the issue with Mackenzie's brigade by advancing through his light battalion to get at the line infantry behind. The British are now aware they are under attack and are able to fire very effectively. Because their light troops have kept my voltigeurs busy, I have not been able to soften up the British line infantry prior to my line infantry forming up and advancing on them. Thus, as the 2/8me and 2/45me form line and advance through the voltigeurs forcing Mackenzie's light infantry to retire to the right of the British line, the two French battalions are decimated by volley fire from the 2/24th and 2/31st, causing them to rout back into the woods and stopping my attack. The two routing French line can be seen facing away nearest the French table edge, right of picture.

My frustration knew no bounds as I cursed my own stupidity. The British light infantry were only one move away from pulling back any way as they had been severely handled by my voltigeurs; the order of battle at the end of this post shows their state of exhaustion. I had forgotten that Solignac's role was to pin Mackenzie, whilst Donkin was being dealt with on the other flank.

If I had resisted the rush of blood, Mackenzie's brigade would have fallen back to realign with Donkin and get into the open ground and the cover of Anson's cavalry, now moving to their support.

I should have been content to stand my infantry down, as both brigades were tiring after two and a half hours of combat, and bring up my horse guns to pepper the British as they fell back.

Instead I was now forced to move my generals towards shaky units, following the two routs, just to stabilise my own force. Tom had made best use of the British blinds by setting up in such a way that facilitated his battalions forming column of companies and heading off up the road away from the action.

So ended a frustrating but excellent learning session with lots of "how to" and how not to" tips gathered by both sides.

The game presents management challenges for both commanders. The likelihood is is that the British will end up firefighting on one of their flanks, depending on where their skirmish line sets up. Provided the French attack areas (unlike in my example) selectively and keep their force in being in others, they should be able to force a positive result. The French approach in open order and the better reduction in British volley fire proved decisive in getting the scenario closer to the historical outcome, and it was pleasing to see those adjustments have the effect intended. I have a few further "tweaks" in mind for future replays, but am happy with my notes from last night's game to move on to the "Night Attack" scenario.

The final casualty list at end of turn 10 showed how costly the rash attack by Solignac's brigade had been. Of the 257 British casualties 168 were inflicted on Donkin's Brigade, at a cost to Laplanne's brigade of just 84, excluding the 2/45me Ligne which went forward in support of Solignac's attack.
The result would have been quite different if the French had contented themselves with taking potshots at Mackenzie's men from the safety of cover as they were manoeuvred back down the road. Instead the 400 casualties suffered in the French attack swung the result back to a minor victory for the British. At best, at least a proportion of the 553 French missing will reappear once a search of the woods are made by French light cavalry!

Minor victory for the British Army
As of Game Turn: 10

Thanks to Tom for being the British guinea pig on this test and for bringing all his skill and guile to bear in snatching victory from defeat. His Dad is very grateful for the lesson that was administered.

Next up, the Badajoz Militia
Posted by carojon at 03:51