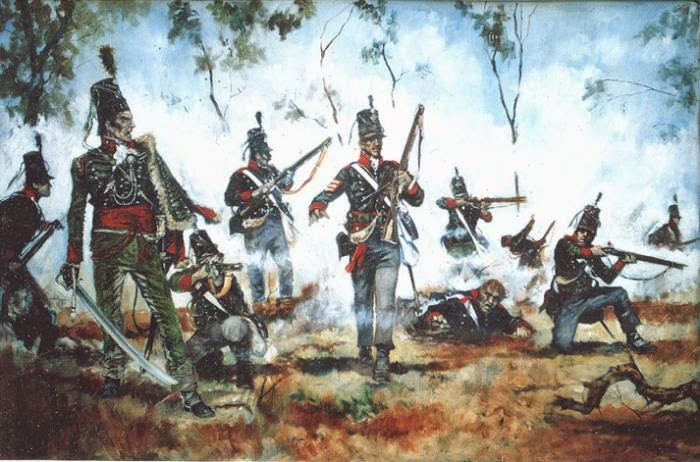 Last night we played the second test game of Casa de Salinas, with Tom taking the French and Mike the British. With Mike being new to C&G we took time to share insights on how the game models the action, and as is always the way, after a few moves we were soon into the flow of the game.


Play tests are really important when you are trying to model an historical action and rarely do you feel it is right the first time you play. I certainly felt that this was the case in the first run through we played last month.

In our action in this game, Tom moved the weight of the French assault towards the left of the road and used minimal forces to pin Donkin's brigade whilst bringing his full effort against the Casa and Mackenzie's brigade.

Keen to try different tactics, especially with the very strong voltiguer battalions of both French brigades, these French light troops moved in in force against the British line. In an attempt to force the weaker British light bobs out of the fight, the voltigeurs formed line from open order and advanced on the British battalions.

The effect was to force the British lights back only to bump the 2/24th and 2/31st battalions who mustered over half their men in their first volleys. The effect on the voltigeurs caused rapid disorder and whilst halted and trying to reform, Tom pushed through their ranks with his formed battalions behind, eager to keep the pressure on the British line.

The British fire was the more telling and when the veteran 1/45th added their volleys to the battle the French battalions started to waver. In desperation, as much as anything, the French line charged the 2/24th and although winning the combat only managed to force the "Warwickshire's" to retire 150 paces facing their enemy with casualties on both in the low twenties. A similar charge against the 2/31st produced a similar result.

The 1/45th were steady as a rock and facing off against their French opposite battalion, the 1/45eme Ligne quickly sent them packing with two well directed volleys.

The army moral levels were starting to separate quite noticeably as the first French brigade reached a cautionary status and Tom sensing the wheels were starting to come off his assault, threw caution to the wind and brought forward his final line of steady battalions to try and force the issue. With all hands to the pumps, even the horse guns were manhandled to within 75 paces of the 2/31st to fire off a round of canister.

Meanwhile Mike remained cool and held his line by attaching Mackenzie, to steady the 2/31st and Wellesley to the 2/24th who gave three cheers at his arrival and reformed their ranks to face the final attack. As they did, they took heart to see the leading squadrons of Anson's 1st KGL Hussars arrive on their right flank in the open ground beyond the tree line.

With all French effort direct towards breaking Mackenzie's line around the Casa, Mike took the opportunity to break contact with Donkin's brigade, sending the 1/88th and 2/87th off in company column whilst covering their withdrawal with the brigade light battalion and the 60th Rifles forming a solid screen of open order light bobs.

The final exchanges between the two forces were from tired, and in the French case, dispirited units, causing minimal casualties, but enough to tip both French brigades into serious morale failure, and forcing the action to a close, with the British happy to break contact and retire towards Talavera.

The casualty record for both forces tells the tale of the action described with four French battalions dispersed and broken and even the French horse gunners having 24 less troopers after firing off their canister and getting a telling volley back from the 2/31st, if a somewhat tired one.


Major victory for the British Army
As of Game Turn: 10

The game was great fun and at the turning point quite tense, as Mike described it, as the British line seemed to waver slightly under the weight of the French attack. The fatigue caused to the French having to traverse the woods and the volley fire from the British on the first exchanges is still not right when looking at the original battle, and our third play through will look to remedy that before we move on to the Night Attack scenario.

Thanks to Mike, in his first game of C&G and a welcome return to Napoleonics, and Tom, a veteran C&G player, for a very entertaining evening.
Posted by carojon at 01:31