It was way back in February that I posted about a visit to the Royal Albert Museum in Exeter and that I didn't get time to see some important parts of the collection in full, namely the Roman, Iron and Bronze age and English Civil War artefacts and so I was really pleased to find some time to pick up where I had left off

Roman Exeter
When the Romans invaded Britain they found an island inhabited by regional Celtic tribes and those people inhabiting the modern day counties of Cornwall, Devon and the western parts of Somerset and Dorset were called the Dumnonii by the Romans, a tribe of iron age Celts.

The Roman II Augusta Legion led by the future Emperor Vespasian established a legionary fort on the banks of the River Exe in 55AD, where it became the principle base until the unit moved to Wales, establishing the new settlement of Isca Augusta.


As the Roman invaders sought to develop their control of the areas of Britain they had occupied, their often insensitive brutality caused the locals, not for the last time, to rise up in open rebellion to the occupation.

In 61 AD Queen Boudica of the Icini in response to her own flogging and her daughters rape by Roman troops gathered together an army from the tribes of the Icini and Trinovantes and set off on a trail of destruction against Roman centres of occupation at Camelodunum (Colchester), Verulanium (St Albans) and Londinium (London).

The Roman Governor Gaius Suetonius Paulinus was busy at the time organising the invasion of Anglesey and had to quickly gather his forces in response being unable to prevent the destruction of the three cities.

At the time of the rebellion the II Augusta in Exeter were under the command of Poenius Postumus who was the Praefectus Castorum the third most senior officer in the legion and thought to have been left in command as the Legate and Senior Tribune may well have left to join Paulinus' staff.

He ignored the request from Paulinus to bring his troops north to help deal with the rebellion and on learning of the defeat of Boudica at the Battle of Watling Street knew his fate was sealed and promptly fell on his sword.


Where ever you find major Roman settlements you find bath houses and the legionaries soon had their own bath house up and running, the remains of which lie close by Exeter Cathedral, with plans to develop the site into a major tourist attraction for the city.

The museum contains amazing artefacts that have come to light over the years demonstrating the evidence of Roman occupation and the early development of the city. I love seeing artefacts like these that seem to connect the modern day with times past and they are even more fascinating when they link you to your own neighbourhood.

Personal items and grave goods provide a more intimate connection with the past and the museum houses examples of Roman soldiers cremations and items deposited with the remains many broken before placing with the burial.

The one thing you would expect to find in a Roman garrison city would be items of the soldiers kit and the museum has some great examples of discarded or lost pieces of military kit. 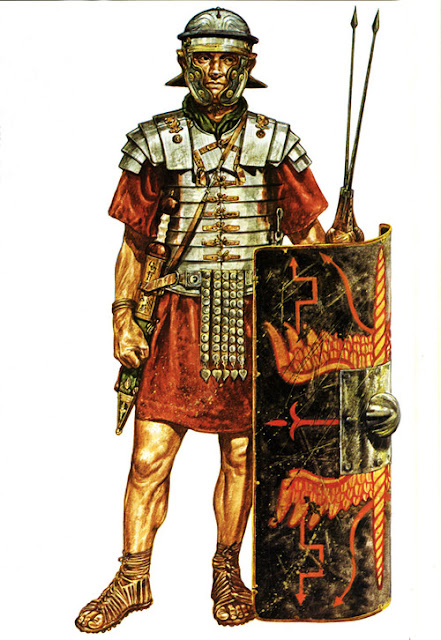 The Devon Celts - Dumnonii
With the recent post about the Woodbury Hill fort, I was really keen to see the collection of items relating to the Dumnonii and there are some remarkable finds on show that illustrate the fine workmanship these people were capable of. 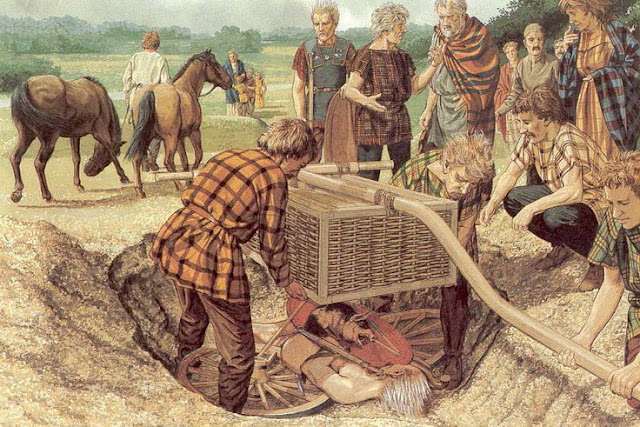 The items are amazing to see and give a great a feel for the sophistication of the people who walked the same countryside that I now enjoy.

Julius Caesar led the first Roman expeditions to Britain in what could possibly be described as a reconnaissance in force in 55 and 54 BC and gave the earliest Roman descriptions of the inhabitants and their customs.

Roman Money
Money says a lot about how a society works and the value placed on people and items by it. Thus the coins and their value have a lot to tell us as well as the artwork they carry of the people and events of the times in which they were created.

Roman coins are all about power and prestige and reflect how Romans felt about their empire. They carry portraits of the "Big Men" of the time, the current Emperor and often depict events that show what a great leader that Emperor was.

The table below rates the coins in value versus one another. The Roman legionary from the time of Marius and the establishment of the professional army in about 107 BC was paid an annual salary of 225 Denarii less deductions for clothing and food. In spite of steady inflation, with large devaluation in currency, through the 2nd Century, this remained the same pay rate until Emperor Domitian (81-96 AD) raised it to 300 Denarii and later still Septimus Severus (193-211 AD) increased it to 500 Denarii.

Anglo-Saxon Coinage
First produced by King Offa of Mercia in about 875 AD, the English silver penny remained in circulation up until the creation of the Kingdom of Great Britain in 1707. These were the coins used to pay off the Viking invaders with their Danegeld protection money and more of these Anglo-Saxon coins have been found in Denmark than here in England.

As I am well into a game based on the King Alfred the Great's war with the Viking invasions, I couldn't resist a picture of these very famous English coins.


Exeter in the English Civil War

The final section I wanted to take some time to see was the collection covering the English Civil War in which the South West was very much involved from the start and to the end as Parliament gained the ascendancy.

There is so much archaeology in and around Exeter that as new buildings are put up to replace old structures, the history of the city is often revealed in the preparations for the new build.

I remember the building of the Exeter Southgate Hotel  in the early eighties and the revealing of the Royalist siege works against the city.

The city endured two sieges by Royalist troops between 1642-43.

It finally fell on the 4th September 1643 after a bombardment and assault by a large Royalist army led by Prince Maurice.

The city would remain under Royalist control until retaken by Parliamentary General Fairfax on the 16th April 1646 as part of his successful campaign to take back the West Country for Parliament.

Civil Wars by there nature are often very bloody affairs and the City of Exeter and its people suffered dreadfully at the hands of both sides as property was destroyed in the fighting and revenge was taken by each occupying force.

I can remember many many years ago studying at school about the role of General Monck in restoring the monarchy to England after the English Civil War and I didn't know he was a Devon man.

General Monck was obviously very astute and a clever diplomat as well as a senior soldier, to have successfully survived the turbulent times he lived through serving for the Royalist and Parliament's forces and leading the delicate task of convincing Parliament to restore King Charles II after the death of Cromwell. 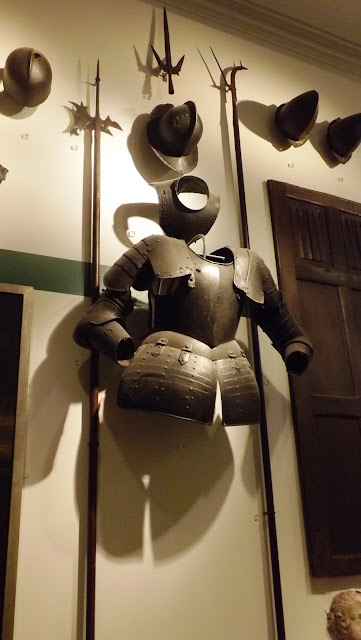 Civil War armour and pole arms kept in the armoury at Rougemont Castle in Exeter and typical of that used by the troops of the period. 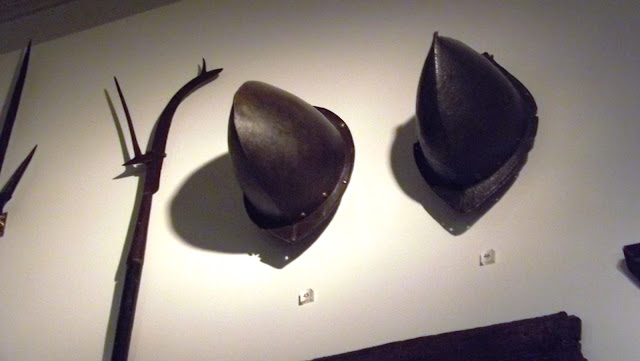 If you are in Exeter and are interested in the history of the city, the wider county and the world collections it has on show, I would highly recommend a visit to the Royal Albert Museum. In the two visits we made this year, there were also special exhibitions in the art gallery that in February featured the amazing work of restoring badly wounded soldiers from the world wars up to modern times, illustrating incredible facial reconstructions developed by surgeons, and this month featured art work illustrating the weather and meteorology over the centuries, with items covering the work of Beaufort, the Navy and the modern Met Office, based in Exeter.