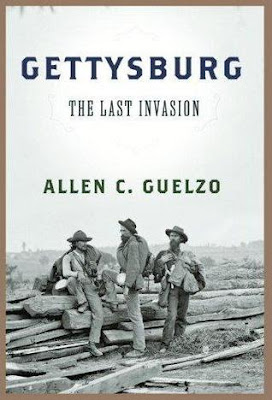 JJ's Note: What follows is a review of this book by my old mate "Mr Steve". The American Civil War is not really my subject, but I know this is a major period to wargame in our hobby and I am sure there are followers of this blog who will find this an interesting review. As an aside I have been to Gettysburg, taking my wife on a tour around it on our honeymoon (start as we mean to go on), I've got the movie and I've wargamed it in 28mm and it's about the only battle of the period I know very much about.

Recently I realised that my own library didn't include any books that had a detailed account of the Battle of Gettysburg apart from, that is, a few general summary’s like Battles and Leaders of the Civil War. I guess I never thought of it before after all everyone knows what happened, I have probably re-fought the battle two or three times as well and the ACW is one of those eras that I have a good knowledge off. My interest had been tweaked by a short review of this book in one of the wargame magazines; I cannot recall which, so as I was struggling to pad out my Birthday present list I added it in.

Good Decision, this is an excellent book.

Part 1 pages 9-135
The first few chapters cover general topics such as the political situation as well as the lead up to the war itself, there is some discussion also on the general concepts of war at this time and how it was carried out mainly from studying European experiences. All wars are initially fought with the tactics from the last big war so military thinking in the US was heavily influenced by Napoleon along with some aspects of the Crimea (although you could say that was much of the same). In a book about a battle fought mid war is this introduction really necessary? Yes, I thought it was well done and I especially enjoyed learning about the political infighting prevalent in the Union Army and also the inter-State distrust amongst the Confederates.

Brandy Station is then briefly covered along with the gradual improvement in the Union Cavalry before we start on the campaign proper .The next few chapters are on the Confederate march north and the response (or lack of it) from the Union, it covers the routes taken, objectives and general plan . Anecdotes are sprinkled in which explain the individual cities responses as the fast moving Rebels advanced on them and of the small actions that ensued when local militias were told to try and delay the advance. I don’t recall exactly where it's mentioned but the use of newspapers played a part in telling both sides roughly where the other was and what they were doing, even being able to tell Lee sometimes how far some of his own Corps had reached and of course sprinkled in amongst all this good intelligence were numerous false sightings by people who swore that the entire Confederate army had just passed right by their house.

Chapter Eight starts with Meade being given command of the Army of the Potomac, let’s just say he wasn't the first choice, rather that he was the first to be convinced to take the job. Many of the other Corps commanders were still very pro-McClellan and wanted him back, some were pro-Hooker and others just knew better. The split between the Republicans and the Democrats combined with the McClellan factor didn't make it an easy choice for Lincoln. Three days later Meade would be fighting the decisive battle of the war, what chance did he have of formulating a strategy of his own or even restructuring the Corps, which were still led by generals who a few days before had been his seniors.

Well there was a plan of sorts and it was to defend behind Pipe Creek therefore blocking the expected Confederate march on Washington and so he sent out orders accordingly for his Corps to move up into mutually supporting positions and for his engineers to commence making emplacements etc.

This book points you towards the various people who were actually responsible for the battle taking place at Gettysburg which was against both Lee and especially Mead's intentions, chief amongst them being General Reynolds of 1st Corps, who according to Guelzo actively sort to bring on a major battle and pushed his brigade and the two others around him to march on Gettysburg where they believed the Rebels had a Corps in the area. 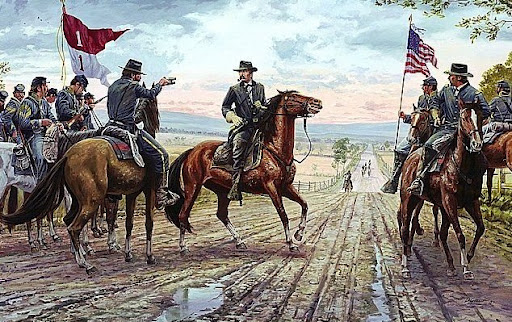 The first day of battle is exhaustively covered with first Buford’s cavalry and then the Union 1st and IXth Corps fighting against the converging Confederate Corps. Whilst relatively successful in delaying them, the two Union Corps were virtually wrecked by the end of the day and with the few collected remnants somehow trying to look determined up on the now famous ridge line desperately hoping that there would be no more fighting that night.

This section is very interesting, covering the First day's action in great detail and includes the reminiscences of the Gettysburg townsfolk.

Part 3 pages 235-370
2nd Day
Another excellent account, it covers well the controversy around Longstreet’s delayed attack and then once it does get going he runs through each successive wave from right to left and the attempts by the Union to stem the assault; bringing in Sickles decision to advance into the Peach Orchard and its consequences and also the fighting for Little Round Top, although the Joshua Chamberlain fan boys might be a little disappointed in the amount of coverage he gets. (Proportionate in my opinion). The general impression you get from this section is how on earth did the Union manage to hold on well into the night as it reads like an utter disaster. 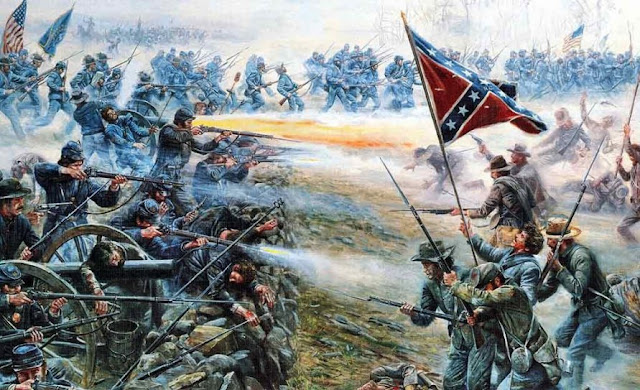 Pickets Charge obviously. Again well done, very detailed, no more to add. Included in this section is a round up covering the end of the battle, the retreat and pursuit (or lack of it) and the political enquiries into the battle both North and South.

Summary.
The individual unit combat detail is excellent and the amount of anecdotes and personal vignettes really make it an interesting read. You get to see how much impact some people you hadn't previously considered or even knew much about had in the shaping and conduct of this famous battle, Meade and Lee could do relatively little to influence events once their plans had gotten under way and that it was actually the Divisional commanders who were making the really key decisions often doing so under heavy fire. Then you also have the before and after sections plus the additional details on the pre battle campaigning in Maryland/Pennsylvania all of which is very welcome.

Minor quibbles, tricky, I guess there must be something. I thought the section on the fighting on Culp's Hill wasn't in the same detail as all the other action but that may be because there wasn't really all that much to report on. A good Index, Bibliography and Notes section is compulsory now however for me the combined Bibliography and Notes section (pages 483-599) is just way too long, I wouldn't mind if there were lots of interesting snippets hidden in there but there are only a tiny handful (oddly this is were you find the famous shoe discussion).It does show however the depth Guelzo went to, to gather his information.

Checking today I found the paperback version at £10.39. Worth every penny.