Napoleon's Maxim's - VI, The Decision to Advance and the Sustained Offensive (Principles of War) 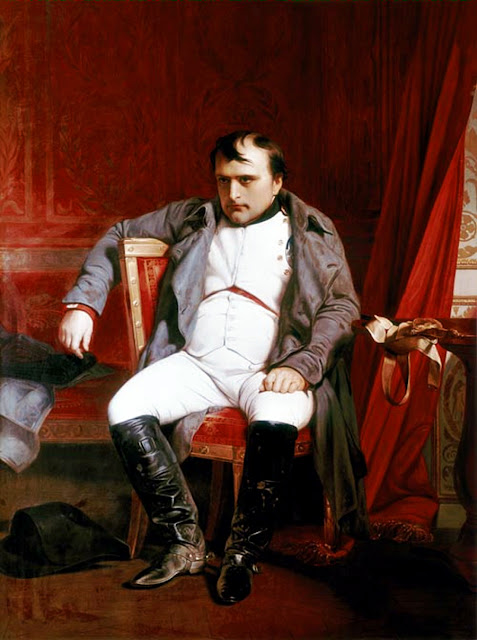 VI
"At the commencement of a campaign, to advance or not to advance is a matter for grave consideration, but when once the offensive is assumed, it must be sustained to the last extremity...."

To quote Chandler on this maxim
"This maxim illustrates Napoleon's conviction that a "rapid and skillful offensive" must grow out of a "careful and circumspect defensive". In other words an attack must be based on careful preparations and not be rashly entered upon without taking necessary preliminary precautions."

The principles, it seems behind this maxim is that the ability of a force to make a sustained and decisive offensive is based on a secure base of operations that has been created to pursue and sustain the planned offensive and that if not carefully planned can leave an attacking force stymied in front of a ever growing defender on extended and vulnerable lines of communication. 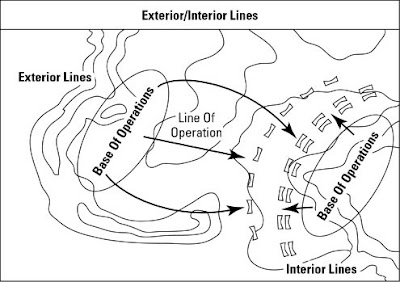 The pros and cons of the offensive vs the defensive can be a fine balance between the morale effects of retreat for the defender and the problems that can create (the retreat to Corunna and the retreat from Burgos are good examples), advance for the attacker (most armies morale increases with a sense of going forward), but with the needs to defend lengthening lines of communication (LOC) versus a defender falling back on depots and reserves and a shortening LOC and being able to take advantage of an interior LOC; only careful planning designed to tip that balance one way or the other will lead to success. In addition, once taken, the decision to attack must be pursued with speed and vigour until the defence is thoroughly beaten with  no opportunity to recover. Easily said than done, there are however classic examples of how and how not to run an offensive/defensive campaign.

Classic examples of the defence was Wellington's defence of Portugal in 1810 against Marshal Massena, which to use Napoleon's analysis displayed a higher level of consideration from the British general than his French counterpart, in that the strategy of British involvement in the Peninsular War was based on securing Portugal from French invasion, before any thought of an offensive to expel French forces from Spain. Indeed work on the Lines of Torres Vedras were began almost a full year before the French were able to amass a field army for the offensive and this preparation together with plans for a "scorched earth" defence coupled with the raising of Portuguese militia and partisan forces to harass the French line of communication were the key elements to tip the balance in favour of the defence. When this was coupled to a secure line of communication between England and Lisbon thanks to the Royal Navy, the defence became even more secure, even against the failure to hold the city, by having a withdrawal option to protect the small British army.

Wellington determined that the French would need a force of over 100,000 men to be able to overcome his defence and in the end they were only ever able to put 75,000 into the campaign. As the French advanced they were forced to detach garrisons along their route as they were shadowed ever deeper into the defensive network which coupled with the attrition brought on by the defensive measures, and the casualties suffered at the Battle of Bussaco severely depleted the force that finally ended up in front of the surprise Allied defensive line and stop point, setting up the inevitable Anglo Portuguese counter-offensive in 1811, against a French force barely able to muster 45,000 men towards the end of the campaign.

Wellington was also guilty of a lapse in his own planning for offensive operations in 1812, when the strategic situation was swinging in favour of the allies, but there was a need for a successful offensive to keep a wavering Spanish ally in the war. The planning for the offensive against Marmont's Army of Portugal was near faultless with the initiative grabbed by the swift, if costly captures of Cuidad Rodrigo and Badajoz and the blowing of the bridges on the Tagus between Soult and Marmont. This coupled with Royal Navy co-operation with partisans in the north east and south east of Spain to tie down the other French armies and the disruption of French communications by the guerrillas to almost keep King Joseph oblivious to the growing situation was a result of careful planning in the preceding winter. The British deciphering skills of Colonel George Scovell were giving Wellington much more insight and confirmation of French disarray and allowing for the judgement of when to bring Marmont to battle before he could expect succour.

The culmination of all this careful planning and activity was capped by probably Wellington's most brilliant victory at Salamanca only to see the offensive collapse due the inability of the Allied army to follow the last part of the maxim, to sustain the offensive to the last extremity that saw the remains of  the Army of Portugal escape to recombine with other forces and the offensive lose momentum with the casual liberation of Madrid and a half hearted attack on Burgos castle that was resisted with great determination that was followed up by a resurgent French counter offensive, led by the survivors of the Army of Portugal, that resulted in a retreat for Wellington's army that veterans reported was worse than that to Corunna in 1808/09.

Wellington can at least be forgiven, in that the campaign of 1812 reinvigorated Spanish and Allied commitment to the overthrow of Napoleon, liberated vast tracts of Spain as their armies withdrew from Estremadura and Granada, and was a lesson in planning that provided the foundation for the 1813 campaign that added in even greater speed of operations, by fast movements (a tactic developed by Wellesley early in his career in India) designed to pin the French to river lines whilst turning each position they selected with rapid flank moves through the mountains bordering the north coast of Spain and the support from the Royal Navy that movement allowed. Eventually this would lead to the creation of a new base of operations at Santander that would greatly shorten Wellington's LOC for operations against France in the following year and total victory at Vittoria when King Joseph made his final stand only to have his forces caught in an enveloping attack as the allies pinned his front and brought their flanking columns in from the mountains. The battle was decisive even though the pursuit was casual but did force French forces over the Franco Spanish border leaving stranded garrisons in their wake.

For an army on the receiving end of a well planned and thought through offensive that is fast and sustained, there is no coming back, as the soldiers on the ground and their generals quickly become "punch drunk" and unable to maintain a will to resist to, what seems to be, an irresistible momentum, and their only thought soon turns to self preservation and escape, rather than fight.