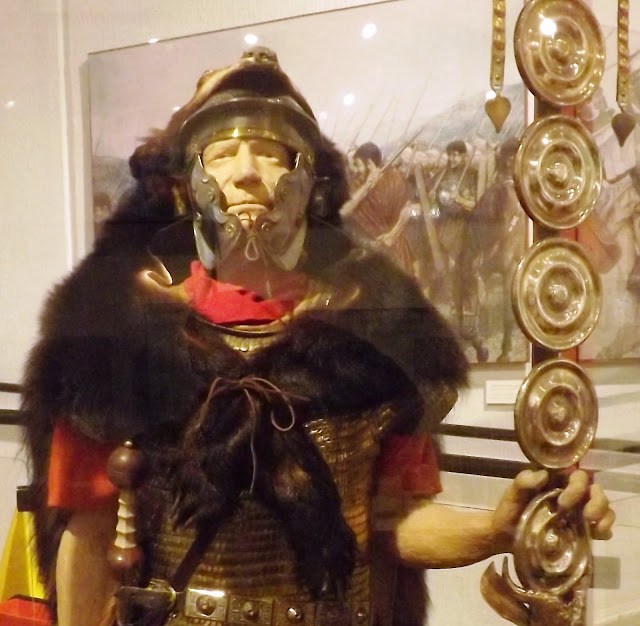 After having spent a rather damp but fascinating tour around the archaeology in Caerleon and after a fortifying hot cup or two of tea and a home made muffin we were off to visit the National Roman Legion Museum.

There is nothing quite like seeing an item close up and being able to take in the scale and detail of it. Visits to museums inform my painting and modelling as does the other activities of battlefield touring and reading and it is just another rewarding aspect of the hobby.

Roman helmets of any period are rare and the example below is the first classic 1st Century model that I had seen. Despite the years in the ground the level of craftsmanship and detail make this iconic helmet a thing of wonder and I was thrilled to see it. 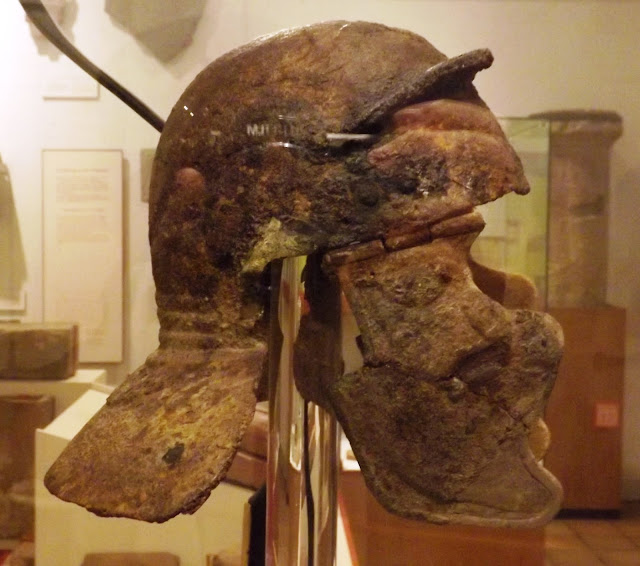 My camera didn't stop as I worked my way round this amazing collection of all things Roman and I have selected some of the best pictures to illustrate the point. This first section focuses on the soldiers equipment, from the helmets weapons and day to day equipment such as cooking pans. 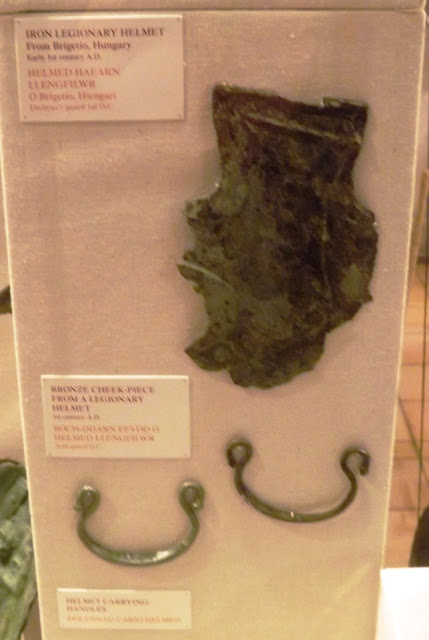 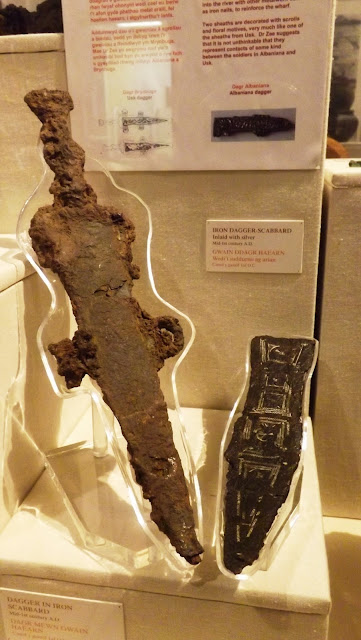 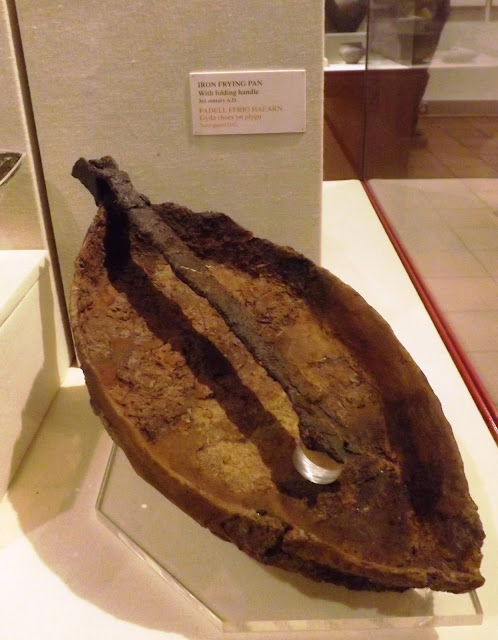 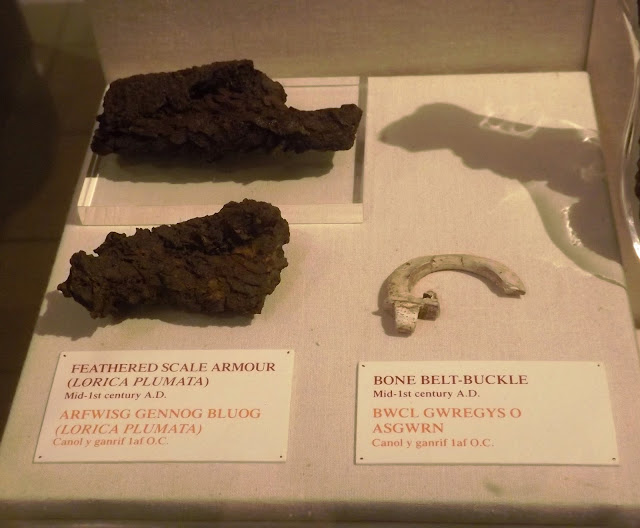 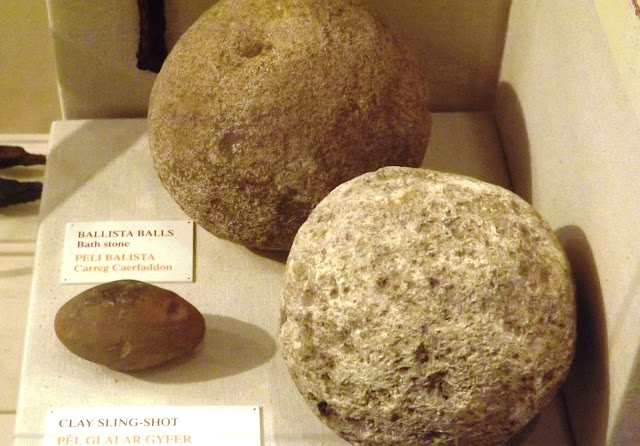 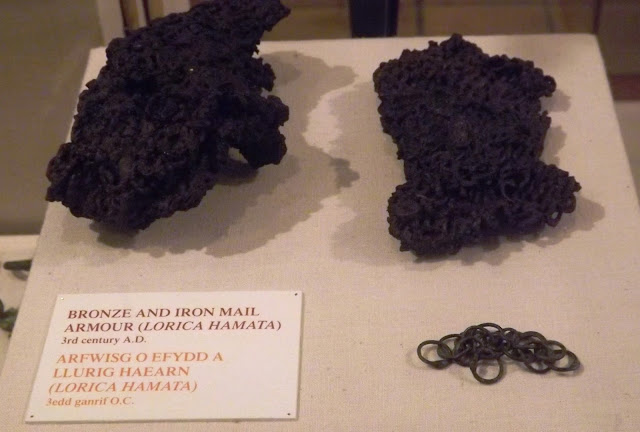 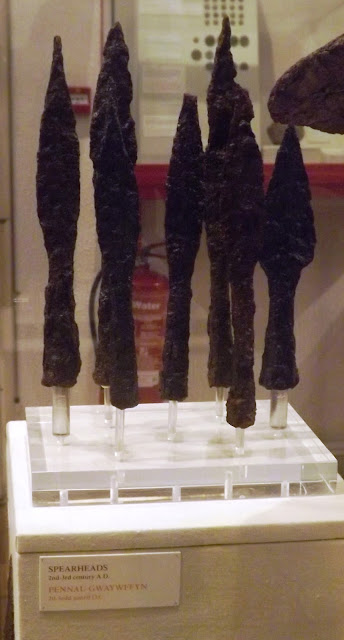 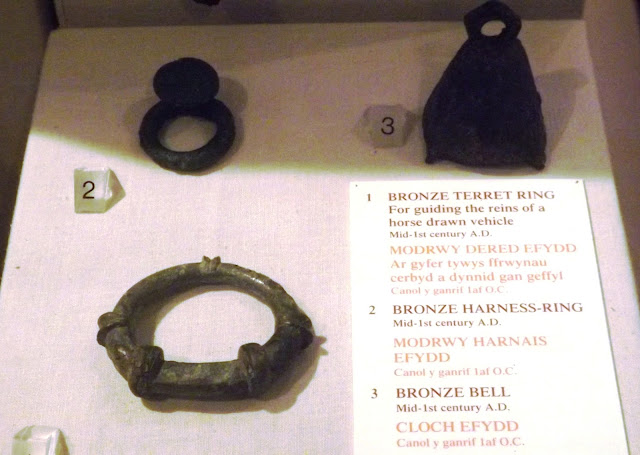 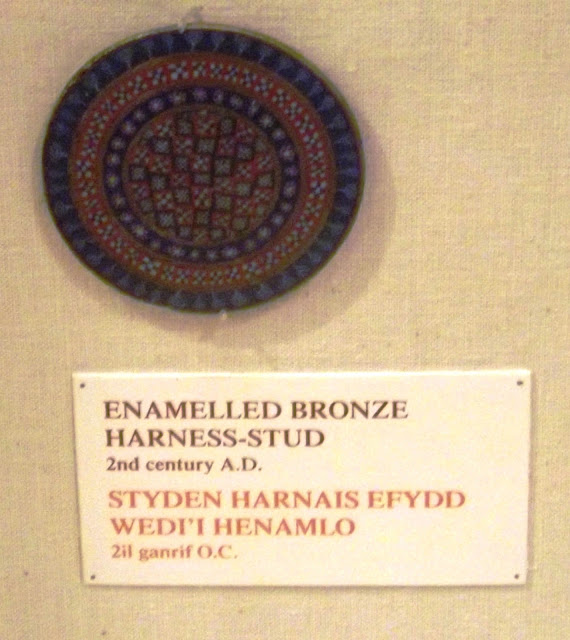 The artistry in the enamelled harness stud above is incredible in its complexity and fine workmanship. 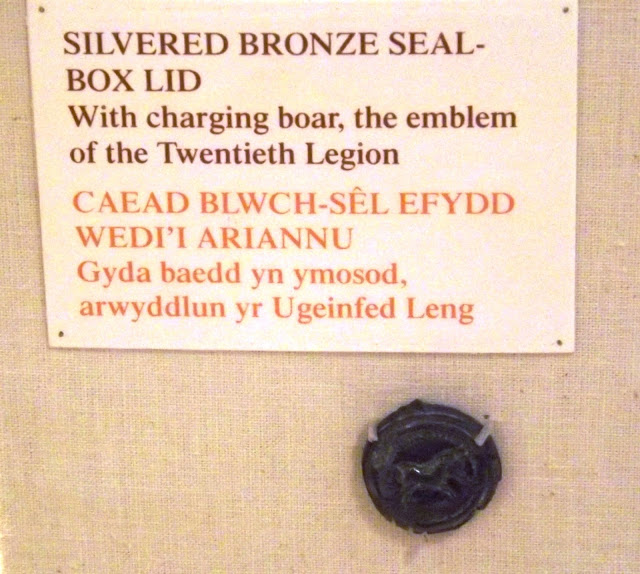 The manikins wearing equipment provided by the Ermine Street Guard really bring the display to life and give a vivid impression of what the items on display would have looked like. 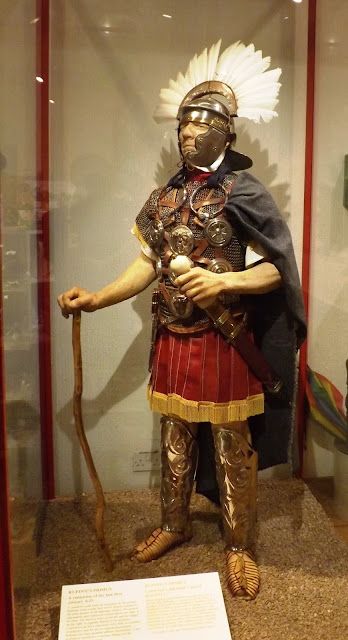 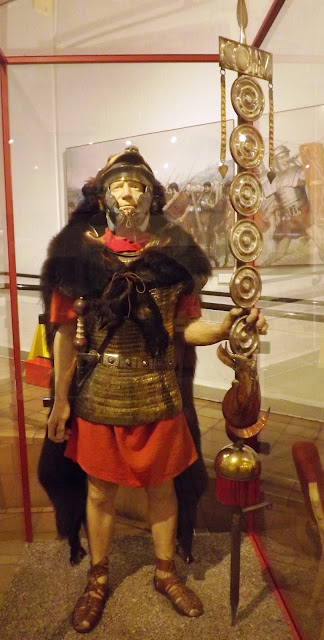 As I mentioned in the first part of this post, it is the personal items that provide a link to the people of the time that I find the most interesting and the inscriptions on Roman grave stones by soldiers comrades and/or family fall very much into that category. 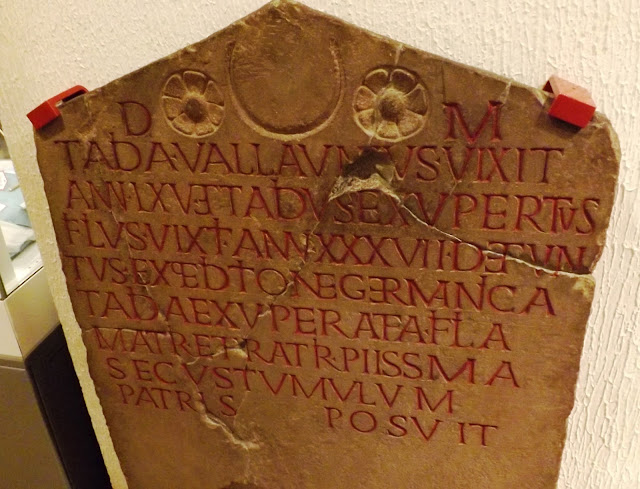 Gravestone of  Tadia Vallaunius and Tadius Exuperatus, recording a soldiers family brought up at the fortress. Tadia Exuperatus died while serving with a detachment of the legion in Germany, and it is thought his father had probably been a serving soldier at the time.

The inscription reads
"To the spirits of the departed; Tadia Vallaunius lived 65 years and Tadius Exuperatus, her son, lived 37 years, having died on the German expedition; Tadia Exuperata, the devoted daughter, set this stone up to her mother and brother beside her father's tomb." 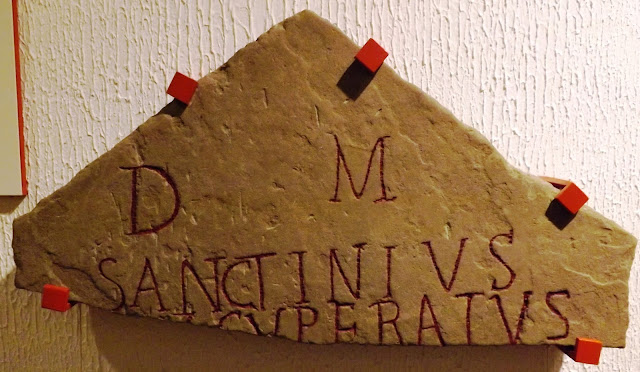 This fragment of a head stone had been reused in a building in the town and refers to a Sanctinius Exuperatus, who may have been the father to Tadia and Tadius referred to above. 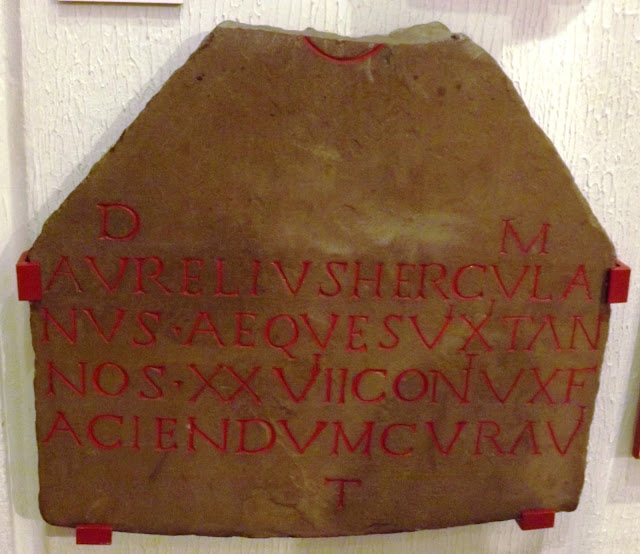 As in Exeter, a major Roman garrison is likely spot to discover coin hoards, probably a soldiers hard earned pay put aside to pay for years in retirement, but destined never to be used. 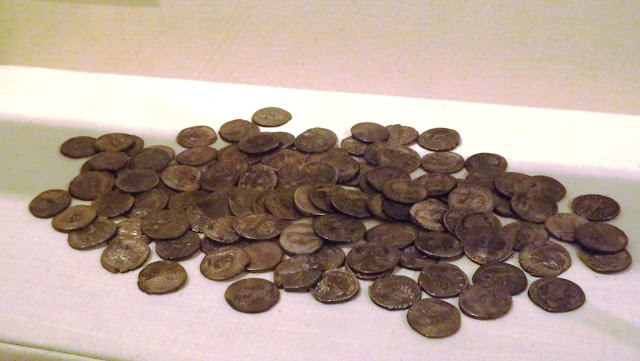 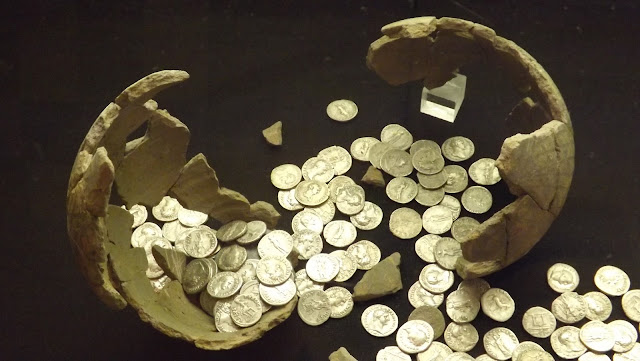 This cooking pot discovered in Venta Silurum, modern day Caerwent, was found to contain 599 silver denarii and from the date of the latest coin in the hoard was probably buried around 160 AD. The town was a popular retirement settlement for retired soldiers of the II Augusta Legion. 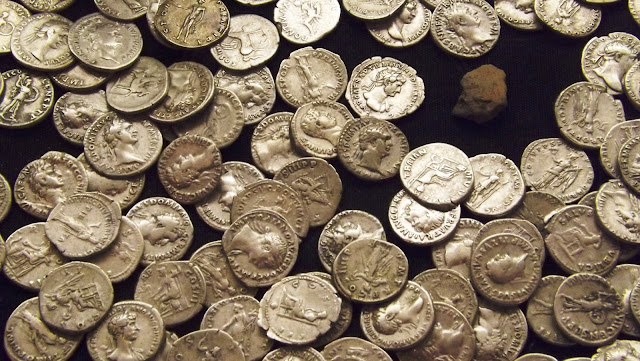 The amphitheatre was a major construction project for the garrison and the soldiers responsible for its building were keen to be remembered for their work with these memorial stones recovered during the excavations and now housed in the museum. 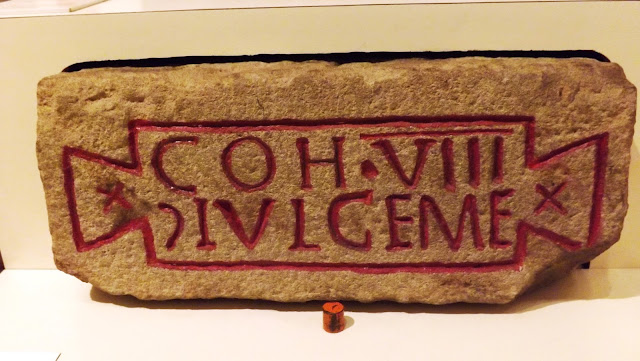 Finally it is to be remembered that Isca Augusta was a significant Roman headquarters and base of operations and training so it is not surprising to find examples of materials that demonstrate that importance and status.

The wall screen below with a section painted to illustrate how it might have appeared at the time is illustrative of that status. 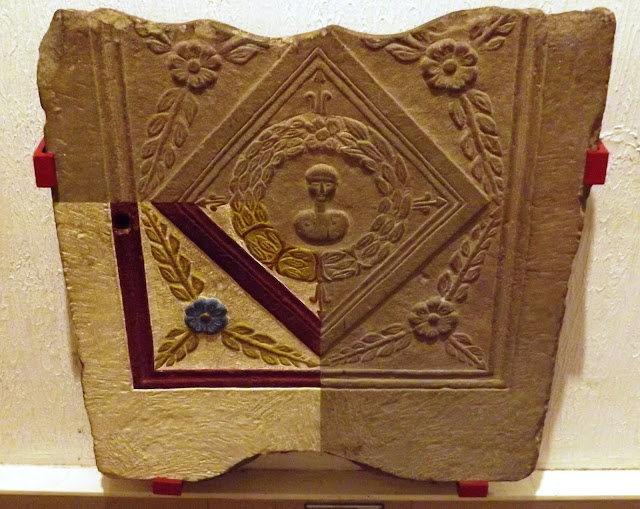 In addition the mosaic below found in the headquarters building area is indicative of the kind of offices and apartments you might expect to see in a building occupied by high ranking senior Roman officers. 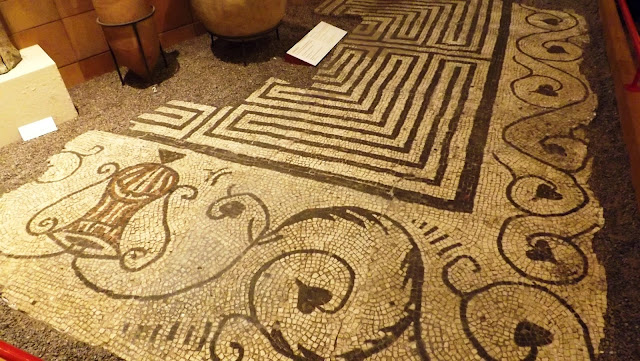 We really enjoyed the day at Caerleon which provided a lovely contrast of exploring the archaeology in the town that, despite the weather, got us out in the fresh air, with the chance to see the finds revealed in the town together with other associated artefacts that just added to the experience.

I should also say that the museum is really geared up to entertaining and educating children, so if you do have the kids in tow, you will find there is plenty there for them to get involved in including child size Roman equipment to try on. My kids are a bit bigger these days but I know they would have loved this kind of museum.

If you get the chance to visit, then I would recommend you make the time, I don't think you will be disappointed. As you will see below, I picked up the guide book to the neighbouring settlement of Caerwent or Roman Venta Siluram which we didn't get time to see but is on the list for a return visit.

For the wargamer you can also take some time to pop down the road to Cardiff and pick up a few essentials at Firestorm Games. I killed two birds with one stone by getting my contribution to this year's Devon Wargames Group Xmas game, with all members tasked with producing a unit of Dark Age warriors. A new venture for me with some lovely figures to look forward to putting together later in the year. 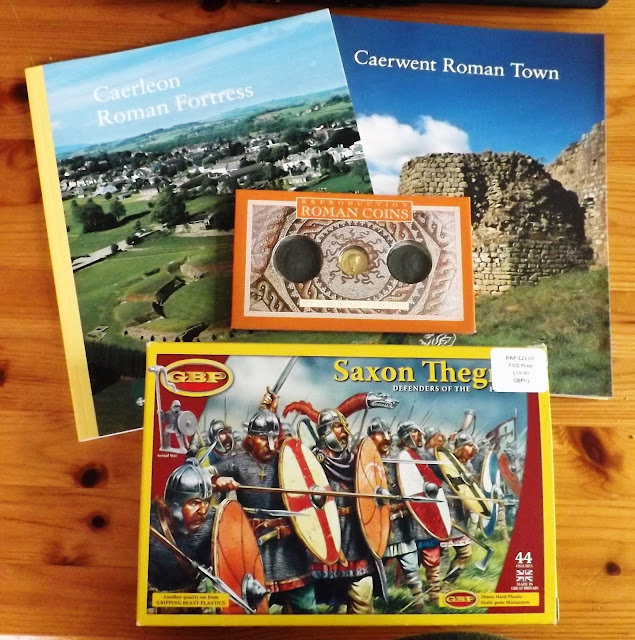