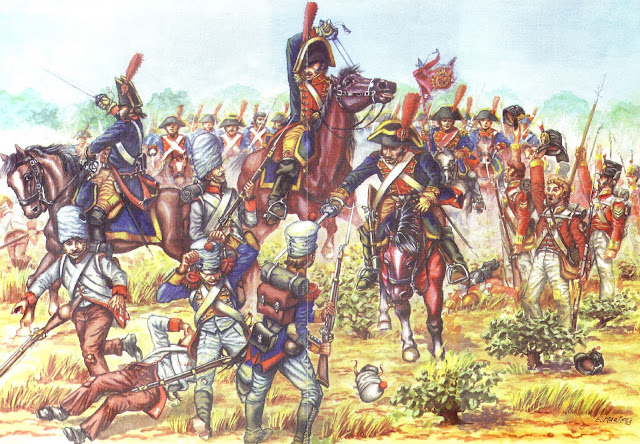 Following our first play of this scenario back in December 2015 and Will's unfortunate defeat at the hands of the Spanish Provincial de Badajoz Militia when French victory was snatched away in the last move of the game, the rematch was on at Legionary 2016 in Exeter yesterday - "and this time it was personal!"

We arrived at the show at 9am to get things set up in time for doors opening at 10 am and as this was as much a display game to advertise the joys of playing 18mm Napoleonics using Carnage & Glory II rules together with illustrating the games we play at The Devon Wargames Group, we had plenty of materials on the table to let visitors know what we were doing.

So after a warming cup of tea we got started on the game soon after 10am for what turned out to be a really great day, with lots of friends and visitors stopping to chat while we played and a really good game that developed into a climax as the afternoon drew to a close. 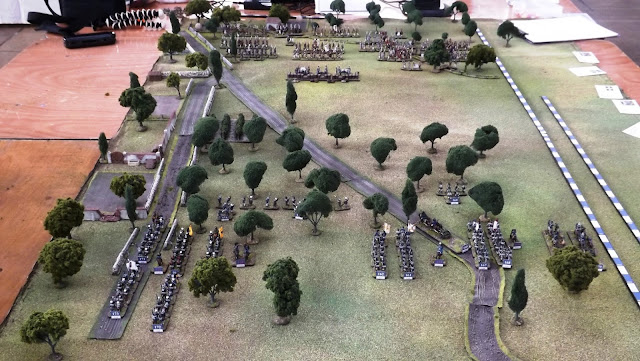 We were very well catered for by the organising team at the show and were able to get the electrics sorted to run the lap top and screen in no time and the following few pictures show the table set up ready to play, with the opposing armies in all their glory.

This scenario is well balanced with two very evenly matched forces that can fight it out "toe to toe" until one or another combat can tip the balance one way or the other.

The French commander has the option of requesting King Joseph to release the Polish brigade in nominal support of his division, but held resolutely in reserve during the historical engagement.

We played it that if the French take the Polish battalions, which are very strong capable troops, the we gave the Allies an automatic shift in the final victory outcome in their favour; thus a marginal French victory would revert to a drawn game.

With the two opposing lines set up, General Leval's troops plunged into the myriad lines of olive trees preceded by their voltigeur screen as they headed off towards the allied line at 14.00 on July 28th 1809.

The French plan was simple, the German troops would aggressively advance their light troops forward to engage the allied guns and any forward infantry looking to cause disruption and fatigue as the German, Dutch and Polish infantry columns made their way up in support.

The German guns would have two batteries head towards the British troops supported by Dutch infantry while the main attack would go in against the Pajar redoubt and the Spanish troops looking to break the Spanish before the British could intervene.

The skirmish battle against the allied guns began at 14.15 (game time) as the French light troops doubled through the olive trees to emerge into the open ground and commence a close fire fight with the allied gunners.

The Spanish twelve pounders gained some respite when their initial blast of canister dropped twenty of the German voltigeurs causing them to fall back in disarray, but General Campbell was keen to preserve his gunners energies for engaging the German columns rather than be distracted into wasteful fatigue fighting off these annoying voltiguers.

With only the Spanish Antequeran Light Infantry able to offer any offensive skirmishing capability, the allied gunners were left to fend for themselves as the allied infantry held the rearward defensive posture.

As the skirmish battle developed around the Pajar, the German infantry columns and artillery batteries began to emerge from the tree line and the artillery duel intensified as both sides began a softening up process sending multiple rounds of round shot barrelling into the opposing lines causing surprising casualties as the shots found additional rearward targets.

With a pause in the advance to allow their infantry to shake off fatigue from their advance through the trees, the German columns advanced on the Spanish positions with the two Baden battalions launching column charges against the British guns, quickly followed by Nassau and Hesse battalions against their Spanish comrades.

The gunners clearly fatigued by their previous exertions had little appetite for a melee against massed infantry and made a hasty retreat abandoning their guns with many men surrendering to the German troops.

The Spanish position was under growing pressure and to their credit were giving ground grudgingly and refusing to break.

Meanwhile the Polish battalions put in charges against the Antequeran Light infantry and the Guadix Militia who both fired off ragged volleys before withdrawing.

General Campbell knew he needed to get his redcoats into the fight but each time he moved his lines forward they were subjected to galling skirmish attacks and multiple rounds of  four and six pounder round shot ploughing through their ranks.

With the Pajar redoubt cleared of allied gunners and securely under French control the French had paid back their debt for the inclusion of the Polish battalions in their attack by securing their principle objective.

However the Spanish division refused to acknowledge their position by breaking and completing the French victory with an allied army moral failure.

Girding their loins for one final push designed to break Spanish resistance and thus make any further attempts by their British allies to intervene pointless, the massed columns of the Hesse and Polish battalions surged forward.

Again the German-Polish battalions charged in to be met by resolute but ragged Spanish musketry and only to see the Spanish troops withdraw but not break.

This time though, rather like the referee seeing one boxer caught on the ropes offering little in the way of resistance, the fight was stopped in the eighth round, with the Allied army morale dropping to 74% and imminent collapse.

With the Pajar under French control and collapse of resistance by the allied troops the game ended in French victory and honours even in the two games played; with the allied order of battle below clearly illustrating the battering they had taken by the numerous units in red, with faltering or broken morale and the French contrasting with just one unit affected.

Talavera - Pajar Vergara
Major victory for the French Army as of Game Turn: 8

Thus ended our game and day out at Legionary. We had great fun playing and plenty of time to talk to people who joined us at the table.

Thanks to Steve, Will, Nathan and Matt for a very fun day and to all the other friends from the Devon Wargames Group who stopped by for a natter during the day. 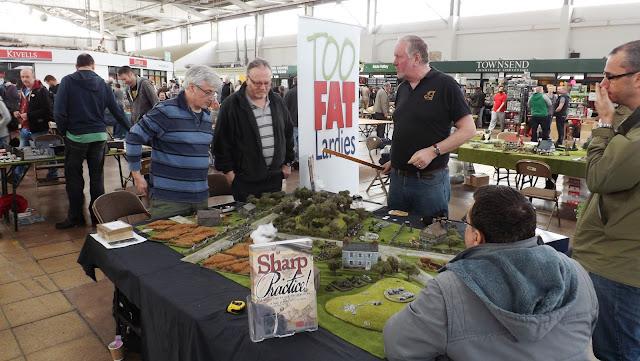 Postscript:
Usually at a show I would take time to wonder round and take pictures of the games that caught my eye on the day and I have to say that Legionary did a good show yesterday with some really nice looking games on show and plenty of visitors wondering around the trade stands.

With my own game to oversee I didn't get the time to do my usual tour around, although I did see a very nice 28mm early war WWII game recreating a German landing at a local seaside resort which looked great fun, a very nice Korean war air game with jets and B29 bombers and a 20mm War in Borneo game with a splendid RAF transport plane overflying the battle scene.

One table I did get chance to check out was right next door to our own and the Sharp Practice game was drawing a lot of attention following Richard Clark's publication of the second edition of the rules. I got my copy this week and enjoyed very much seeing Richard's AWI collection in action, grabbing a few pictures on the day.

We also had the pleasure of Richard's company at a post show curry later in Exeter with some very enjoyable banter that put a great cap on a very fun day. 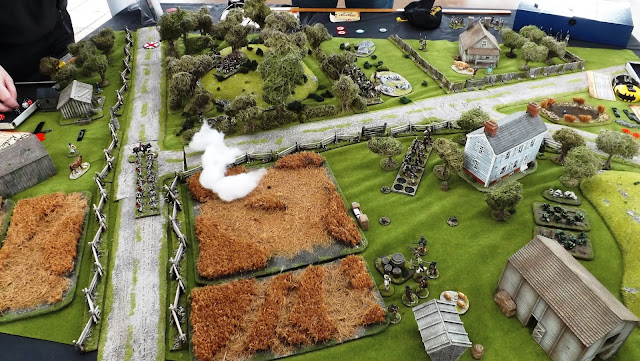 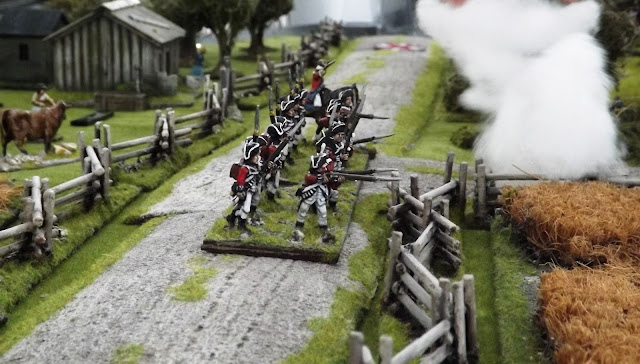 Thanks all to everyone involved, a day to savour in the memory.
Posted by carojon at 03:03