As is customary at this time of year, I very often like to get out into the countryside and burn off a few excess calories whilst getting loads of fresh air and looking at places of interest.

I thought this year I would carry on the story of looking at the English Civil War in Devon by focussing on a battle in Somerset that was pivotal to the siege of Exeter and the Battle of Torrington posted about earlier this month.

I don't propose to go through why the Royalist forces in the south west found themselves defending a hilltop river crossing in Somerset in July of 1645 against Fairfax and Cromwell's New Model Army.

Suffice to say, the last significant Royalist army and base of support lay in the West Country in 1645 and following the defeat of the King's northern army at Naseby on the 14th June 1645, Fairfax took the war to this part of the country looking to end the first civil war the following year.

For a more thorough explanation of the strategic situation you should follow the link below to the excellent BCW Project site.

This and the links below at the bottom of the post formed my principle recap on the battle and its events and I discovered the guide leaflet to the Langport Trail provided by the Langport & District History Society, which was a very handy route to follow and gave a very pleasant two hour walk across the fields via the country footpaths. I would however recommend taking a copy of the OS map illustrated on the Battlefield Trust site as further guidance to the trail map and for getting a better idea of where the two armies are thought to have lined up. 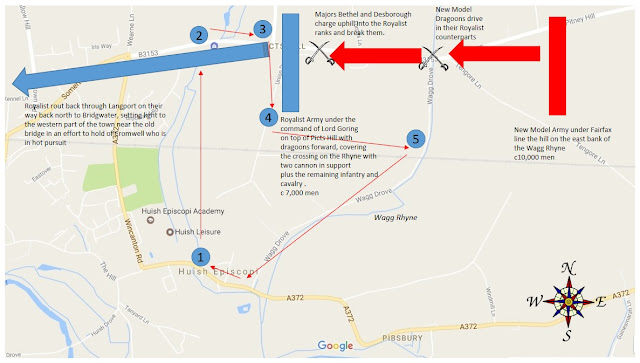 You will also find that there is still some debate on the precise battle site as the three nearby crossing points of the Wagg Rhyne have been suggested as the focal points of the battle, with the modern day railway crossing in amongst them.

I have gone with the accepted offering ready to do a follow up post if necessary once the needed battlefield archaeology research has been completed.

We started our walk after a very welcome hot bowl of soup and bread at the Rose & Crown (Eli's) Pub (Point 1 on the map above) famous for its bar or more correctly that it doesn't have one. On entering the pub you find yourself almost stood among the pumps and optics.

The battle was fought in July and the ground would have been quite different to the December day we decided to walk the area. If you decide to follow the route I would suggest taking a pair of walking boots as the paths could be quite muddy whatever the season.

We headed out across country following the footpath north from the pub over the railway line and out onto the modern B3153 which is the road out of Langport heading east towards Somerton over the position at Picts Hill chosen by Lord Goring to make his stand on the Wagg Rhyne.

Goring was looking to cover the withdrawal back north towards the coast at Bridgewater and further supplies of men and materials from the King's forces across the Bristol Channel in Wales.

He had already sent off the bulk of his artillery and supplies earlier and felt confident in holding the New Model Army up until nightfall using the hill and Rhyne to help compensate for his lack of guns and numbers.

The climb up and over Picts Hill towards the Royalist positions illustrate the significance of the chosen ground and the likely benefit offered to Royalist cavalry charging downhill.

Moving out on to the ridge line of the Royalist position gives an excellent view of the Parliamentary lines and the hedgerow enclosures used by the Royalist dragoons to garrison and contest the crossing points on the Rhyne.

Looking out across the fields, you can almost imaging the New Model with banners flying and artillery pointing towards the Royalists opposite as their dragoons set off down to towards the Rhyne on that July morning in 1645.

The New Model dragoons under Colonel Thomas Rainsborough soon established superiority over their Royalist opposition and with the crossing secure, perhaps one of the most audacious cavalry attacks began as Major Bethel led a column of cavalry up the lane, four abreast which broke in among the Royalist cavalry.

I have also read some comments that Bethel may well have deployed into line once crossing the Rhyne, which seems more likely but less glorious!

Bethel was held and pushed back by weight of numbers only to be reinforced by a second charge led by Major Desborough (or Disbrowe) with the remaining cavalry, which finally broke the Royalist army and routed them back towards Langport.

General Lord Thomas Fairfax described the action in his report back to Parliament written at 7pm on the night after the battle.

"We understanding their intentions by some scouts and other countrymen, resolved to charge them and accordingly drew down a commanded party of musketeers to beat them from the hedges which was done with gallant resolution, advancing the same time with two regiments of horse into the lane, all that we could draw up in front was but a single troop and that commanded by Bethel, the enemy standing ready with bodies of horse of about 1,000 to charge him. He with a single troop charged and broke two of their divisions, of about 400 received the charge of the third division both in front and flank was somewhat overborne at last and forced to retire to the General’s Regiment which was about 100 yards behind Desborough, with the General’s troop sheltered him by his flank to rally and charge up himself with about 200 horse of the General’s Regiment disposed of the enemy and set them all a running, gained freedom by it for all our horse and foot to draw into bodies, sent the enemy running not being able to endure another charge. The General, Lieutenant General and some other officers upon the hill, beholding the gallant charges commended it for the most excellent peice of service that ever was in England."

The rout by the Royalist troops through Langport saw them set fire to the western edge of the town close to the old bridge over the River Parrett in a desperate attempt to hold off Cromwell and his cavalry leading the pursuit.

The defeat of Goring's army shattered Royalist resistance, and he withdrew the remnants back into Devon harried on the way by Somerset Clubmen (partizans against both armies) who had negotiated with Fairfax on the 11th of July to not interfere with the New Model in return for supplies.

Fairfax quickly moved to secure his own lines before moving off in pursuit of Goring and into Devon. The first major garrison to fall was at Bridgwater which was finally surrendered on the 23rd July to be followed by the City of Bristol which was stormed on the 10th of September.

The defeat at Langport not only unhinged the Royalist hold on the South West but seriously undermined the confidence in Royalist troops and commanders to be able to meet the New Model Army in the field and have any hope of defeating them. This, probably more than the loss of territory was the critical turning point that the Battle of Langport represents and was commented upon by Lord Goring in his own assessment of the battle.

Next up, seasonal fun and games at Chez Chas in North Devon, A review of 2016 and look forward to 2017, plus British Napoleonic Generals and French Horse Artillery for Talavera 208.
Posted by carojon at 04:06