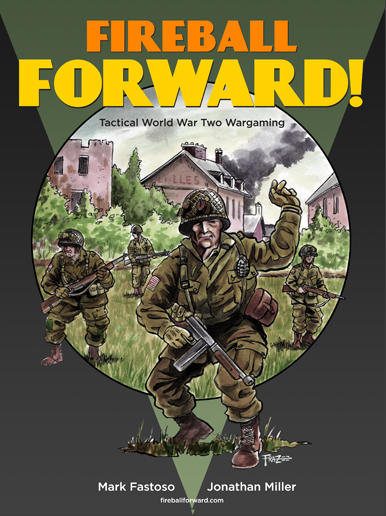 Yesterday, Tom and I had much fun at the Devon Wargames Group playing a gamed hosted by fellow DWG member Si B, using his 1940 collection of WWII 15mm figures and playing for the first time, Fireball Forward (FF).

I saw the rules being played at Devizes last year and was reminded of them from when I first read about them with the publication of the first edition a few years ago.

I remember them looking like Squad Leader for the table-top very much with their modelling of section or squad bases rather than weapons groups as in I Aint Been Shot Mum (IABSM).

So what was my first impressions after our first game?
Well I like them and both Tom and I found ourselves very quickly picking up the nuances that the card driven activations present together with getting our head around the different dice combinations (D6, D4, D8 D12 and D20) we were using for the various weapons.

As with all variable initiative lead driven games each side is looking to string a series of moves together to allow a combined attack to have the greatest effect.

One key difference in FF is that the initiative cards (red suit/black suit playing cards) are drawn from the deck continuously, only stopping when an opposite colour suit is drawn. The player then decides based on the number of cards drawn which and in what sequence the corresponding units (Platoons) will activate marking each with a sequence number, 1st 2nd 3rd etc.

Each unit then conducts its movement, rallying and firing in any sequence it chooses before the next unit is activated and the process is repeated.

This means that every unit gets to activate in a turn before the cards are reshuffled unlike in IABSM where a double Tea Break card can end a turn leaving some units unactivated.

This aspect of IABSM can put some players off and I suppose FF provides more certainty of stringing moves together knowing all will activate at some stage in a move. I probably lean towards the IABSM level of uncertainty and chaos management simulation as being more in line with my own thinking but I found myself enjoying Fireball Forward, so the difference for me is minimal.

The other aspect of the rules that stood out for me was the use of variable dice for range and chances to hit, that once memorised produced a tense excitement to the combats.

For example, the light mortars and HMG fired using a combination of D20 for range, two red and two white d6 for hits.

So the basic chances to hit are set at 4+ for targets in the open, 5+ for in cover and 6 for hard cover/buildings and these are the factors applied to the white dice. The red dice reflect exceptional shooting and thus only cause a hit on a 6. If the D20 score is greater  that the range to the target then the shot is deemed to be in effective range adding one to the white die score.

Hits are then saved against using a D6 to roll equal to or higher than the base morale of the group/s targeted with groups usually requiring 4+ to save or 3+ if close to an un-hit commander who would test to save first.

Two hits on a group would destroy it, with commanders able to test to rally off successful hits when newly activated. Thus multiple hits were the order of the day in an attempt to destroy or drive enemy groups back suffering single hits and choosing to fall back before attempting to rally them off, or not if staying in hard cover.

The variable range dice are a very clever mechanic and provided a large level of uncertainty as to how effective any given fire attack would be. Certainly towards the end of the game, with units cowering in buildings carrying single hits and the threat of getting a second with multiple incoming rounds really created a sense of tension which was great fun.

Fireball Forward are a very good set of rules and provide an entertaining game, definitely worth checking out.
Posted by carojon at 05:45