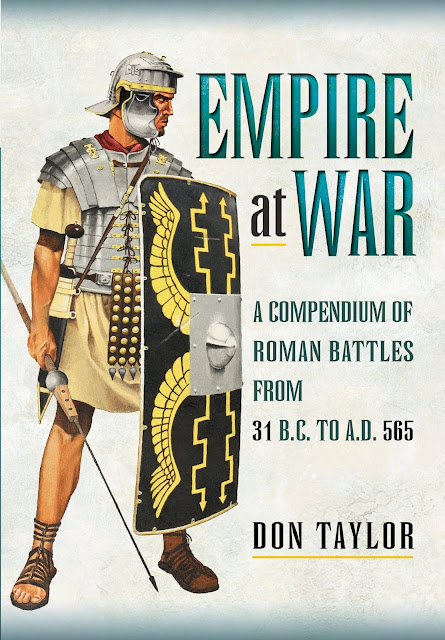 As highlighted in my recent post on matters 'Augustus to Aurelian' and work on preparing the shift of focus to my Dacian Wars project later this year, I have picked up a copy of Roman Empire at War by Dr Don Taylor.

I should, I think, preface my review about this book by first stating that it is first and foremost a compendium, ie a collection of detailed but concise descriptions of the significant battles fought by the Roman Empire from Augustus to Justininan I, with a lot of minor ones thrown in to.

The point about this book is that the descriptions of these battles draw solely on the information provided by the earliest surviving chronicles or texts without any additional sub text to further illuminate the validity or not of those sources other than a very full description of the issues modern researchers will find when using them to work out the facts of these ancient battles.

With the occasional map illustration added to provide clarity to some of these battles. the reader is presented with the original references that underpin the modern descriptions that later authors have come up with and thus their efforts can be compared with the original source material and conclusions made on the educated guesswork that has gone in.

This makes for quite a dry read, but not an uninteresting one for the historical wargamer keen to underpin their scenarios with as much factual research that history will allow given the imperfect nature of this kind of source material.

I have found myself flicking through scenarios presented about many of the battles contained within this book and enjoyed analysing the creativity of others trying to make sense of the little that is known.

Thus this is not, for me, a cover to cover read but a book that I know I will come back to again and again as I look to build on my Early Imperial Roman and Dacian collection eventually adding in other barbarian foes together with sufficient Romans to allow for all the civil strife that plagued the empire and the many scenarios that collection will present and I will need to read up on.

So details about how this book is put together are that we have two parts to the layout:

Part One, pages 3-21 give a concise overview of the structure of Roman Imperial forces covering the early, mid and late empire. As a wargamer interested in ancient Imperial Rome I found myself skimming through this section as much of it was very familiar stuff. Likewise this is followed by a two page summary (pages 22-23) covering the role of Imperial naval forces over the same period.

Pages 24 to 36 are given over to looking at the reliability of ancient sources, notes about battlefield numbers followed by an alphabetical list of the various authors and their works together with a brief description of the background of these authors as a way of assessing the value of their contributions during further research by the reader. The encouragement that the reader should take this material very much as a start point for yet further investigation is quite clear and where some might find it frustrating that the author makes no comments of his own, I on the other hand quite like to be left to draw my own conclusions without additional bias, no matter how expert.

Part Two forms the core of the book as the author lists the battles in an alphabetical order followed by a chronological order (pages 39 to 45) covering the period 31 BC to 565 AD and I love the fact that there is not a CE reference anywhere.

Each battle described is identified by name, date, the description of the action followed by the author or authors, their work/s and relevant page/or chapter identifier,

So for example a very succinct reference is:

Amasias River, 12 BC - In a naval action on the Amasias (Ems) River, the Roman general Nero Claudius Drusus defeated the Bructeri, a German tribe occupying the lands between the Amsias and Luppia (Lippe) rivers.
Strabo, Geography, 7.1.3

This reference caused me to flick through my copy of "Eager for Glory" by Lindsay Powell a book I reviewed back in January last year to see what Mr Powell had written about this action using his research and knowledge of Roman and German tactics and abilities in this period.

His chapter covering the campaigning season of 12 BC goes into detail describing the boats used by Drusus including pictures of modern replica's based on archaeological discoveries that have revealed the secrets of Roman design. His reference to this action was;

"The character of the Bructerian attack is not detailed (you can say that again!) but we may deduce that the Germanic opponent could take to the river in skiffs or canoes to try and board the Roman ships. They could also launch missiles and throw flaming torches from the safety of the river bank to set the Roman vessels alight: and cut down trees  and float them in the water to block the Romans' southward advance or their retreat downstream. The supply vessels were particularly vulnerable, being filled with flammable cargo and dry goods. The deck mounted artillery weapons on the Roman ships were pressed into action to pick off the Bructeri attackers. Superior arms and discipline prevailed and in Strabo's concise but grand phrase "Drusus won a naval victory over the Bructeri."

Thus I think this simple illustration shows the value of Don Taylor's excellent work, as now we can all easily compare and contrast what modern authors, or indeed wargame scenario designers like me have come up with based on the original sources, combined with a mix of modern archaeological research that possibly gives us yet more insight into what might have happened.

The final sections of the book include a 'Notes' section that references the works used to illustrate the overview in Part One, followed by five pages of Bibliography that references the lists the modern and ancient sources referred to throughout the book and last but definitely by no means least there is fifteen page index listing People and Places refereed to in the book, very useful.

Dr Don Taylor holds a PhD in European History, concentrated on Ancient Mediterranean Studies from Fulbright College of the University of Arkansas (USA) and is Professor in European and Ancient History at Hardin-Simmons University, Texas.

The book is published by Pen & Sword Books Ltd and is available from them at £19.99 plus £4.00 post and packaging, however best price I could find was £12.76 with free delivery from Wordery online bookshop.

If you are interested in what underpins our understanding of the battles of the Roman Empire, particularly if you want to play wargame scenarios with that underpinning then I think reference books like this are a real must have. The fact that all the information has been brought together in one book is a real plus. For those interested in the earlier period of Roman history you can also find a similar book by Dr Taylor covering the Republic.