Realism vs Playability in Wargaming on 'The Veteran Wargamer' 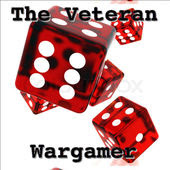 I listened with much interest to a new podcast to my listening library, namely Jay Arnold's "The Veteran Wargamer", a category of Wargamer I probably tick all the boxes for.

I had started following the podcast after the dual presentation between Jay and the chaps on the Meeples show and I'm really enjoying the very thoughtful and considered presenting style together with some really interesting topics. In fact I am starting to think of this podcast very much as the thinking wargamers listen.

The latest episode, see the link above, featured an interview with Henry Hyde who always has interesting contributions to make and also brings a veteran's perspective on the hobby, discussing realism and playability in wargaming.

If you like engaging with these kind of academic discussions that underpin a lot of what the hobby is all about then I would simply point you in the direction of this show.

I found myself nodding in agreement with much of what was discussed, principally around the ideas of rule-sets getting clarity around the command level they seek to portray or the level they are putting the player in.

As an example, the Battleground series of rules were mentioned, a rule set I have played and reviewed here.

The rules position the player at the company/battalion commander level and yet seek to include detail such as ammunition count and appropriate rounds loaded, issues that are mission critical but probably to the individual weapons commander rather than the player's level.

Perhaps we wargamers only confuse the rule writers paradigm by insisting on the level of detail that allows the player to flit between these little bits of chrome whilst playing our higher level battles. That made me think about my Napoleonic playing and the level of game I am trying to model.

With Carnage & Glory and more recently Over the Hills I am playing games with brigades, divisions and corps, with the lowest level of commanded unit being the battalion, squadron or half battery. The games are modelled to allow players to command at Marshal or General commanding levels down to a Brigadier General with three or four battalions. The players are able to set up their combat formations as they desire, certainly at the start of the game, with the computer having a slight advantage in adding the extra granularity if you choose of including the lower level considerations of ammunition supply, without burdening the player with any record keeping.

On consideration, I thought, yes I do like that granularity, but not if it interferes with the key decisions I would be making as a general officer commanding a brigade, division, corps or army, which both rule sets do very well.

Another good point that got me thinking was Jay's interesting conclusions about the dread 'R' word 'realism' and the point that no matter how good a simulation our game offers, we cannot hope to capture the impacts that affected real life commanders often operating with the effects of lack of sleep, food and with the threat of impending death for them and those they command. In fact the clue is in the description of what we do 'game'.  I don't want to experience real war, nobody in their right mind would, and what we are about is having fun playing with our toys, simulating aspects of command and trying to model there likely consequences.

I like to think that wargaming is all about asset management, with a limited supply of assets and trying to get the best return with what we have, working within the rules set by the game we play. The best games for me are where I get to test my skill at decision making and the results generated from those decisions in the face of things going wrong or not as I expected.

I liked the proposition that actually 'realism' is a poor word to describe what we are trying to achieve especially when throwing in the aspects of ground, figure and time scaling that very often require huge compromises, particularly when the depth of any given formation of troops is considered; that perhaps 'plausibility' would be a better gauge word to assess our rule sets by, namely do the decisions players are posed with making and the results generated look plausible, with all the subjectivity that description implies.

At the end of the day one man's plausible is another man's incredulity based on our own reading, experiences and personal bias, and that is why one set of rules will never rule them all - a bit Tolkien, but you get my drift.

The other key aspect, for me that came up in discussion was the theme of our time, namely 'friction' and the way that various rules have sort to impede the players will during play to simulate the effects of Clausewitzien theory about how the simplest of activities become hugely complex and difficult during combat and very difficult to predict as to how and when any given activity will be completed.

I find it amazing that some of my fellow hobbyist still baulk at this idea and insist on being able to do what they want when they want in the traditional 'igougo' way we played back in the day. I found myself in agreement with the proposition that if it doesn't have friction, then it's a game, not a wargame.

Of course the measure of friction and how it is built into a given set of rules is what the art of rule writing is all about. As the term implies, too much friction and all activity stops in a grinding slog or halt. Conversely, with cards being the common device of choice, the need to make sure that the balance is maintained to allow players to have some possibility to impact the game with their command choices and not simply rely on them getting the right hand for any given game.

Other rule sets unable to surrender the Games Workshop methodology of 'igougo, everything gets a go' have turned to ideas of blunders and continual activations with great die rolls, leaving a frustrated opponent unable to move or react in response and simply suck it up as they are forced to watch their command get dissected. My eldest son was put off a set of rules when this happened vowing never to go near them again.

Thus with most things about our curious hobby we come back to subjectivity, compromise and balance in just about everything we rely on to generate the games we do.

I still fall back on my fun/simulation measure to assess the rules I like to play with that balance of getting both aspects in equal measure, but I have also added another consideration, namely the aesthetics, or how does the game look that these rules generate.

I want my Napoleonic infantry in two ranks minimum with battalions, squadrons and batteries that give an impression of those aquatint pictures from the early 19th century shrouded in smoke and with generals, sword in hand leading from the front as they charge into the maelstrom.

I want my small Roman two rank cohorts in triplex/duplex acies, chequerboard style in front of big scary hoards of yelling charging barbarians with groups of cavalry hovering about on the flanks of the battle line.

I don't want to take my toys off the table in a daft attempt to model casualties, being much happier spreading a few dead and dying models to capture the areas of heavy combat.

Most of all, is I want my rules to be able to allow me to get the important part of 'history', the 'story' of the game with those moments when a plan came off or when disaster struck or the heroes of the day performing the deeds recorded in the greatest of battle histories and the tales that live long in the memory when you are sat in the pub reminiscing with other veteran wargamers who can barely tell you what day it is, that alone who is the prime-minister.

If you haven't yet checked out Jay Arnold's 'The Veteran Wargamer' then I would recommend doing so. A two hour drive to Bristol simply flew by whilst listening to the discussion - recommended.