The Battle of Boxtel fought over the 14th to 15th of September 1794 is one of those small clashes that really should be described as an 'action' or 'combat' rather than what one would consider for the period as a battle involving tens or hundreds of thousands of men.

The clash came about as one of those small contacts that occur when two larger armies close on one another and the situation in 1794 in Flanders saw the French Republican armies in the ascendancy following their victory over the Coalition Army at the Battle of Fleurus in June.

The Austrians began an immediate retreat to the Rhineland conceding the loss of the Austrian Netherlands and obliging their allies to follow suit by disengaging and retreating themselves northwards and abandoning Brussels in the process, taken by General Pichegru's forces on July 11th closely followed by Antwerp on the July 28th.

By the end of August the Anglo-Hanoverian army, commanded by the Duke of York, was behind the River Aa close to s-Hertogenbosch with forward elements watching the potential crossing sites over the River Dommel and a force of two battalions of Hanoverian infantry covering the bridges at Boxtel.

With a pause as the French took time to take the channel ports, General Pichegru resumed his pursuit of the Anglo-Hanoverian army in September, feinting towards Breda on the 4th but then turning east to occupy Eindhoven and close rapidly on Boxtel.

The French attacked the little village with an estimated 10,000 men under General Antoine Delmas on the 14th September held by a two battalion, 1,500 man detachment under Hesse-Darmstadt Major General Georg von During supported with light cavalry and guns.

The French attack began at about 3pm as their columns drove in the Hesse Jagers as they closed on the Dommel bridges close to the Stapelen Castle but were held at bay until 6pm by the steady musketry of the Hesse infantry defending them. 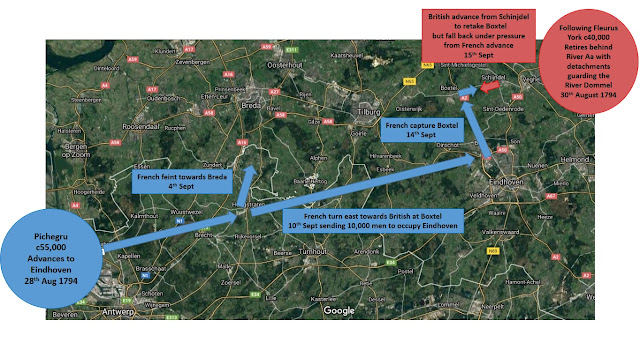 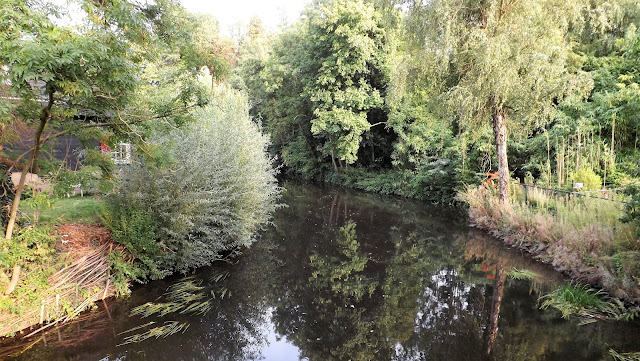 In time a detachment of 30 troopers from the 8th French Hussars found a shallow point on the Dommel to cross over and get behind the Hessians in Boxtel, attacking them in the rear and forcing them to surrender whilst the remaining allied troops beat a hasty retreat out of the town setting fire to the Barrier House to help cover their retreat. 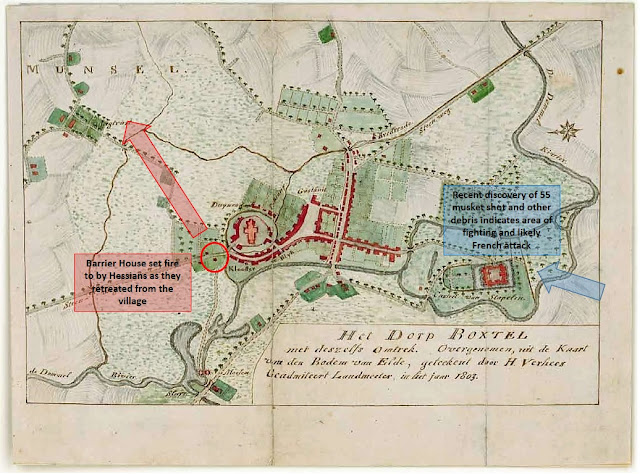 On hearing of the loss of his forward detachment, the Duke of York immediately ordered Lieutenant General Ralph Abercromby to launch a counter-attack to retake the village with the Guards and 3rd Infantry Brigades, the latter commanded by a certain Colonel Arthur Wesley.

Abercromby marched through the night to bring his brigades, numbering some ten battalions before Boxtel only to become uncertain as to the strength of the French forces before him and sending for confirmation from York that he was still under orders to attack and take the village.

On getting his orders to attack reaffirmed he began to advance towards the village meeting stiffer French resistance as he did so and only confirming his opinion that the French were of superior numbers indeed even the whole of Pichegru's army. 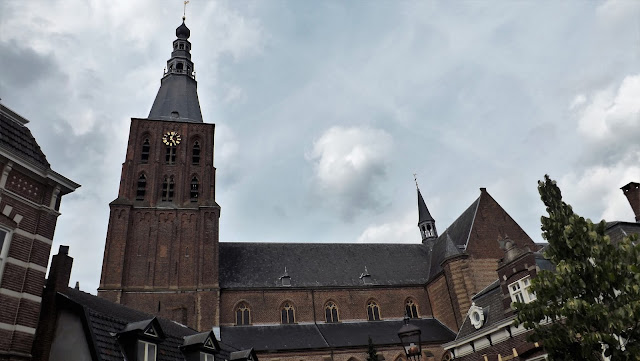 Fearing his left flank was about to be turned Abercromby issued the order to retreat towards the village of Schinjdel, which soon caused confusion among the British troops threatening to turn a retreat into a rout.

As the French attempted to close on the British retreat, Wesley's own battalion, the 33rd Foot formed line in the rear-guard and through several well delivered volleys stopped the French pursuit in its tracks allowing the main force to retire relatively unmolested and gaining the recognition and honour for Wesley and his command.

This was the future Sir Arthur Wellesley, as he later became known, first time in action and would see him take the laurels from his future 1st Division commander in the Peninsular War, Lt Colonel John Coape Sherbrooke, who actually commanded the 33rd that day replacing Wesley as he took command of the brigade.

The Battle or Combat of Boxtel is not the best documented of actions with some confusion over recent years as to where specific events such as the French attack on the first day actually occurred, only being given some indication by recent archaeological discoveries in Boxtel suggesting the French attacked close to Stapelen Castle.

Time and again when wondering around pre 20th century battle sites I always find buildings to have been there at the time as good stating points to get ones bearings from, and that usually means churches.

The church at Boxtel is a good case in point and the map from 1803 together with the late 18th century watercolour confirms its position and existence during the battle and would have been a recognisable feature to the troops involved.

The other two sites mentioned in various sources include the site of Barrier House set fire to on the retreat by the Allied troops and now built over with a replacement building but still recognisable from the former map and road layout of the modern town. 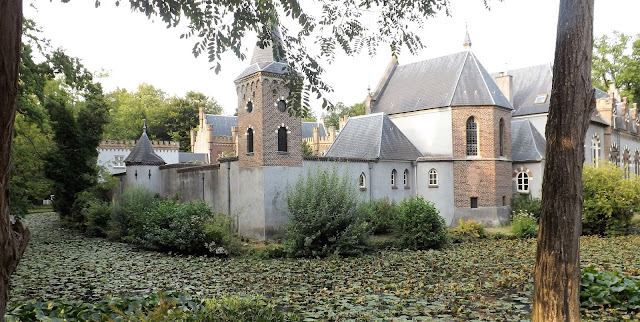 Another readily identified landmark is the Stapelen Castle dating back to 1293 and pictured here in the late afternoon sun on the day we visited. 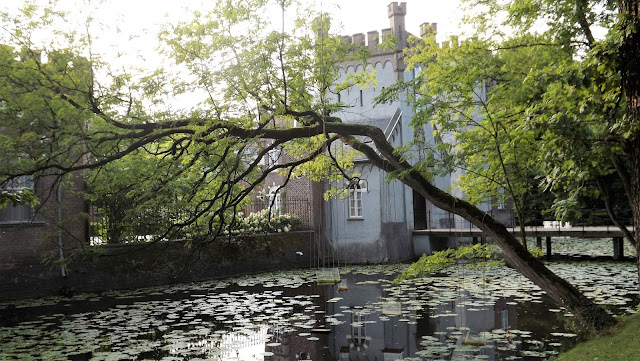 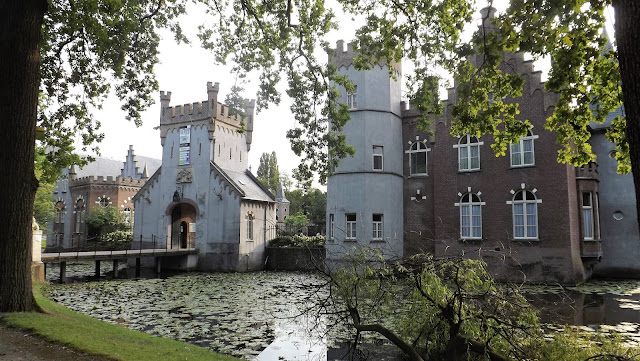 Another interesting aspect about Boxtel is the origin of the reference to British soldiers being known as 'Tommies' particularly during WWI and WWII.

The story has it that during the retreat of Abercrombys force on the 15th September, Colonel Wesley spotted a man from his regiment, with twenty years in the service, badly wounded and dying from three wounds, a sabre slash to the head, a bullet through his lungs and and a bayonet thrust in his chest.

Looking up at his commander and seeing his concern he said to Wesley " Its all right sir. It's all in a day's work" and then died.

The soldier concerned was Private Thomas Atkins and must have made a deep impression on the young future Duke of Wellington who chose 'Tommy Atkins' as his representative name in 1815 for specimen forms of the new 'Soldiers Book' issued to cavalry and infantry with the name used to indicate where a soldier should place his signature.

It makes a great story but I see from Garry David Wills' research notes that no such chap shows up on the muster rolls for the 33rd Foot in the 1794 campaign. 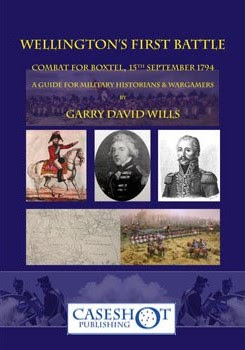 Note: Doing my homework on this battle prompted me to get a copy of  Garry David Wills' book
on the action 'Wellington's First Battle', which should be waiting for me back in 'Blighty' on my return.
Posted by carojon at 23:28