Over The Hills Play Test - Second Battle of Oporto 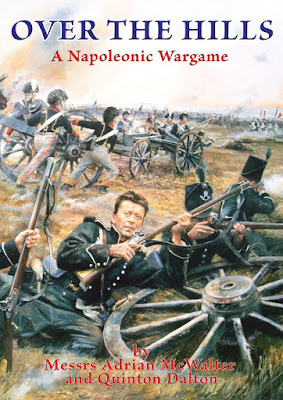 We first recreated the Second  Battle of Oporto way back in 2014 when I put together a model of the famous gorge created by the River Douro, flowing past the Bishops Seminary high above the river on the outskirts of the city.

Not everybody wants to go to that extent to re-fight this famous assault crossing and so in this recreation of it for our Over the Hills play-test we had to redesign the table without over compromising on the ground scale and layout of the original game.

In addition, we wanted to create a scenario that captured the historical narrative with the chance for a variation to that narrative to play out, whilst also testing the result against the battle itself.

This scenario proved the most challenging of all those played so far and, in our determination to work it through, required two play-tests to balance the various components which sees the French having to change posture from an all out attack to defence and withdrawal in the same game. This alongside variable arriving British columns, restricted order options and off table units able to fire onto the table


So the table presented here is what you might call "Oporto Light" with the key features readily identifiable as with the on and off table forces, but with the boundary to the table focusing the action around the seminary and the town outskirts perched on the hills on the road north to the Spanish border.

These few pictures are from the first run through of the game that revealed immediate changes to the draft set up, but also that the concept and framework provided enough scope to build upon.

The first challenge was developing the rules around the seminary and the fight between Foy and Paget's garrison which the historical accounts talk of it being carried out with great elan by the French troops and seeing General Paget lose an arm in the fighting.


".... the drums beat to arms, shouts arose, the citizens, vehemently gesticulating, made signals from their houses, and confused masses of troops rushing out from the higher streets threw forward swarms of skirmishers, and came furiously down on the Seminary."
Lt Gen. Sir William Napier, English Battles and Sieges in the Peninsula

Any wargamer playing the French and seeing massed redcoats lined up behind stout walls with a fire-step has nightmares of Hougoumont and other such like encounters flashing through their mind and thoughts of why should I attack that thing when I know we will be withdrawing soon.

Off course poor old General Foy didn't have the benefit of hindsight and at this stage of the Napoleonic Wars, French infantry had a pretty high opinion of themselves and their capabilities, and rightly so after their string of victories against equally well emplaced capable enemies.


To recreate Foy's estimation of the situation and his decision to press an immediate attack to eject the redcoats from the seminary we have him on 'attack' orders from the start with only Marshal Soult, on his arrival on table, able to countermand his decision and start the process of getting his army clear of the threatened encirclement of his diminished force.

The battle for the seminary was hard fought and General Paget commanding the brigade ensconced behind its perimeter lost an arm during the combat that would see him out of the war until his return in 1812 only to be captured by French cavalry whilst conducting a forward patrol. A very capable general, he gets additional command benefits in this game but due to his nature of being in the front is liable to be severely wounded and needing to be replaced by General Hill.

In the first run through the fighting was also very heavy with several rounds of French artillery fire hitting the defences, degrading them and together with the hand to hand fighting leading to several fires breaking out plus Paget's wounding in the process. All this before the 66th Foot had been able to land and bring the brigade up to full strength behind the walls.

As General Foy's infantry fell back from it's second attack Murray's and Cotton's brigades made their appearance on the eastern table edge and still Marshal Soult had failed to respond to General Foy's aide, desperately trying to convince the general that the observed redcoats were not the Swiss bathing in the Douro.

As General Foy made preparations to receive Murray's and Cotton's troops whilst warily observing the troops in the Seminary for any sign of offensive activity from them, Soult finally reacted with orders issued to the other brigades to begin the withdrawal.


As both armies started to amass on either side of the table and the French busied themselves with a rapid change of posture, we stopped the game due to time constraints but decided to replay the scenario to a conclusion to determine how the second half of this game would look whilst replaying the opening with all the modifications written up from the first test.

In our second play-test Steve and I reversed our roles and I took command of the French and as in the first run through, threw my regiments at the seminary although not as successfully as Steve, failing to start fires or wound their illustrious commander and then encountered the 'perfect storm' of events with Murray defying history and turning up as early as he could with Cotton's cavalry.

If that wasn't bad enough Soult was dragging his feet responding to my ADC and so we ended up with perhaps the worst position for the French to be in, other than Soult taking another turn to react which as you will see would have made things even more of a challenge.


As it was the sight of all that KGL infantry and British light cavalry forced Foy's brigade to fight on two fronts with the voltigeur battalion and foot guns repositioned to challenge the new arrivals whilst my infantry rallied off the effects of the combat they had had on the walls of the seminary.

As soon as Soult arrived on table he joined Foy and gave him his new orders to withdraw and act as rearguard to Reynaud's brigade whilst Franceschi's cavalry division was ordered to hold the road exit open on the northern heights.


At this stage, the game was perfectly poised, as General Paget prepared to leave the confines of his fortress and direct the British offensive, whilst Soult and his general officers started to sort out the congestion of traffic starting to fill the road north whilst directing the units detailed to defend the retreat route.


There is something really satisfying about this type of game, quite different from the usual attack and defend battles we have all played, and the mental challenge of organising a retreat in the face of a large and pressing enemy force really gets the adrenalin going, as both sides strive to get an advantage.

General Foy's men had taken a terrible battering not only from the seminary battle but also by a gradual accumulation of hits from British artillery units from across the Douro.


Their selection as rearguard was almost by default as by any merit for the role as they were where they were needed and, with the help from the French cavalry who managed to prevent any disasters from rapid British cavalry attacks, they by forming squares amid the cavalry along the road, prevented Cotton's men from closing off the escape route.

However the British artillery kept on plugging away at my tail end units and it only took one to tip into a rout to cause me to lose two more of my rearguard battalions as they tipped over from wavering into rout themselves reacting badly to the sight of their comrades in panic.


By this stage with just a couple of turns to get the required number of units off the table, Foy's brigade was broken but that only caused the remaining good order units to carry on retreating alongside the rest of the army.

As Murray's infantry caught up with Foy's men closely followed by the seminary garrison the French position was looking more and more precarious, however the infantry were still managing to inflict casualties on the pursuers getting them close to the point where they would prevent an immediate British pursuit thus improving French chances of getting a positive result.


With Reynaud's brigade off the table bar one battalion and the artillery battery, Cotton's dragoons made a last ditch charge to close the road and break the French army morale. In response the French 1me Hussars and 8me Dragoons met the attack and succeeded in driving the enemy back and taking the British over their fatigue threshold but also seeing the French army teetering on a rout as the last turn was completed.


The pictures above and below shows the positions of the two armies at the close with the French rearguard contesting the road north but with the bulk of French forces now marching away from the city and the battles ahead, avoiding Portuguese guerrillas and Beresford's Anglo-Portuguese column to be followed in turn by the rest of Wellesley's army.


When I say the French were teetering on a rout, the card below shows just how close, with one fatigue point remaining. That said Reynaud's brigade, force card 2, escaped practically unscathed and the French cavalry were still in good fettle to protect the rear.


The British cards reveal a force still full of fight if a little battered with the Seminary brigade on just 7 fatigue points remaining and the army morale, force card 1, reduced by over 25% by the action.


So that concludes the second of these four remaining scenario play-tests and a game both Steve and I thoroughly enjoyed by taking it right to the end as neither of us could call it until it was over.

Next up the rearguard action that preceded the Second Battle of Oporto as Wellesley's main army try to encircle the French troops south of Oporto as they fall back before his advance.