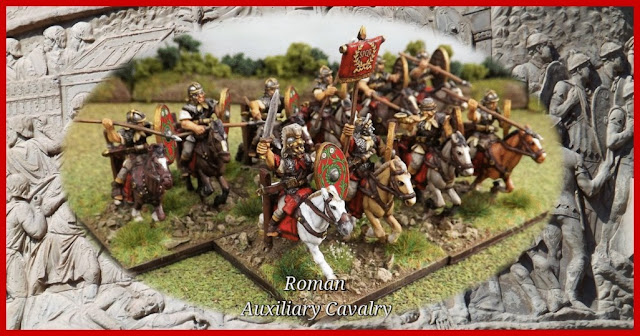 The principle arm in most Roman forces is going to be composed of a solid core of legionaries and/or auxiliary infantry.

That said the armies of the Principate were well served by a comparatively smaller but no less effective body of cavalry mainly composed of the auxiliary ala with many of the soldiers hailing from conquered tribes used to fighting in the saddle. 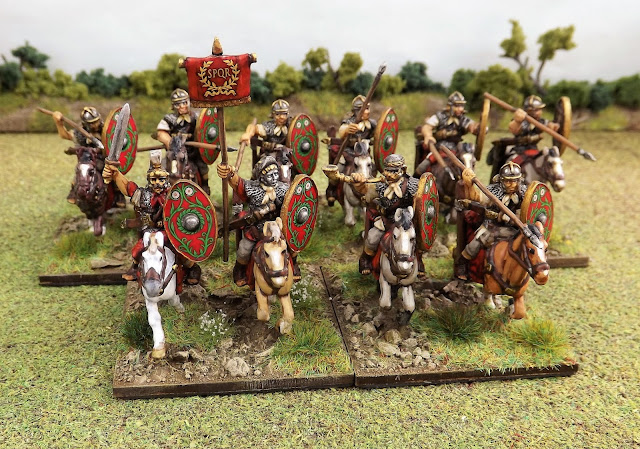 As in previous posts and with my first game using these figures with 'Augustus to Aurelian' (AtoA) coming up, I thought I would illustrate the combat effectiveness of this kind of unit.

I intend to operate my auxiliary Roman cavalry in half, or perhaps that should be demi, ala representing about 250 men.


A half ala of 'new kids on the block', untrained auxiliary cavalry will get to roll three d10 in combat and two when throwing javelins.

Their 'to hit' factor in both cases is 2, which reading down the appropriate column in the table above means, against unarmoured or lightly armoured opposition they will cause casualties on 5 or less or 4 or less respectively before any column shifts for specific factors that might make those odds harder or easier.

Of course you would rather hope not to take on Cataphracts too often! 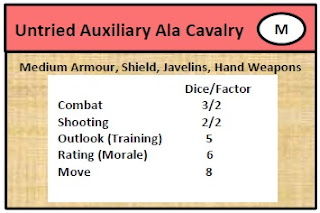 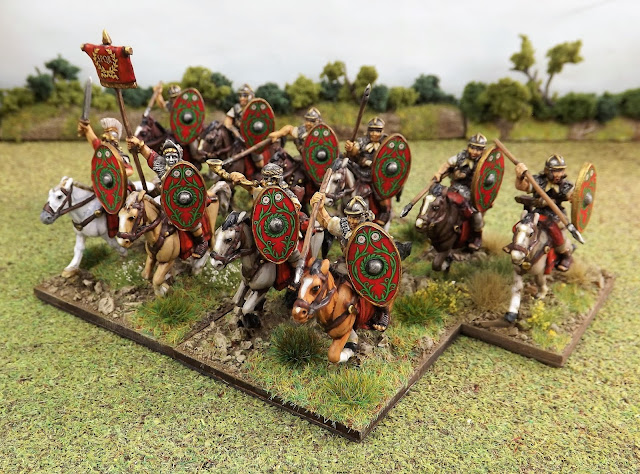 The more usual trained and experienced troops illustrated in the table below add a 10% improvement on those dice even against cataphracts, although I would still urge caution with the latter.

In addition to improved combat ratings the training(Outlook) and morale (Rating) are improved meaning these units can take up to five hits before becoming shaken and would need to roll seven or less on a d10 to pass a reaction test before any additions or subtractions for additional factors. 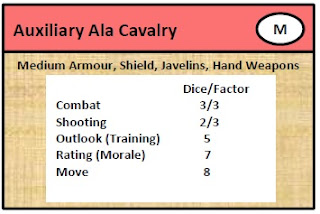 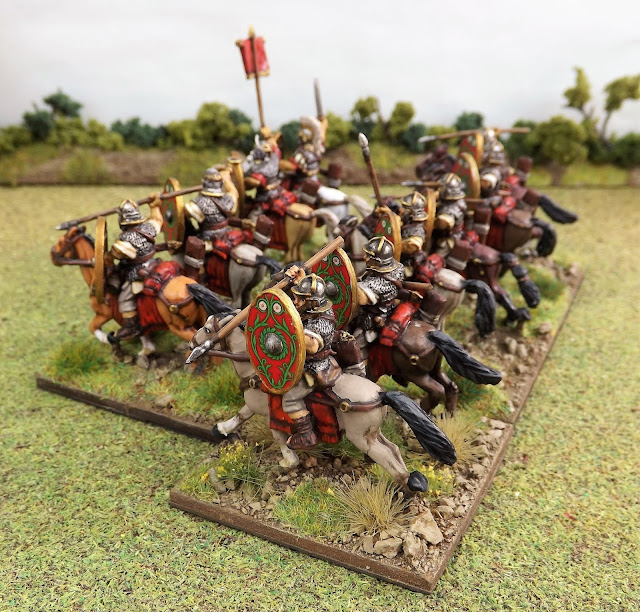 The hardened or veteran ala go another 10% on the combat dice and start to become competitive against the better protected cavalry opponents.

Like wise the Outlook and Rating means the ability to take casualties and to respond well to difficult situations is also improved. 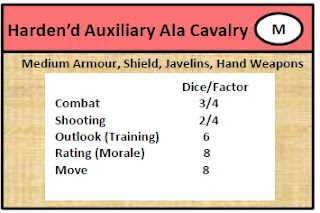 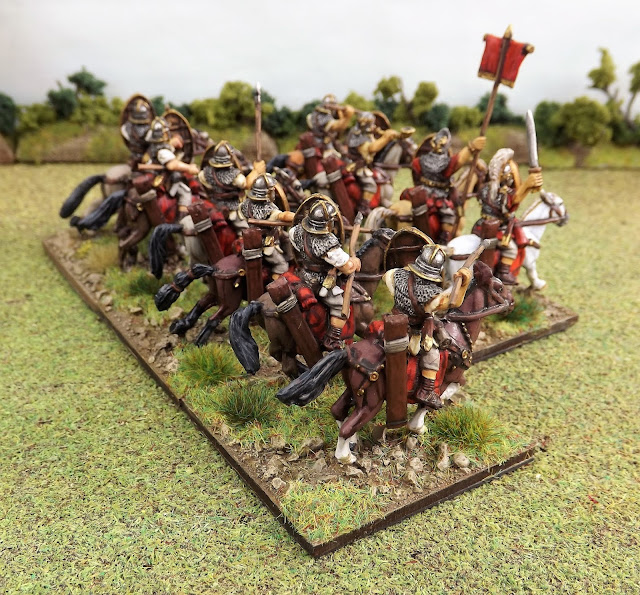 Finally we can model the unit to represent one of the specialised ala such as the Batavians who proved their worth at the Medway and likely at the crossing at the Menai Straits, Anglesey with their inherent swimming abilities for getting across difficult waterways.

The special ability 'Expert Waterman' means these troops treat different types of watery terrain one level of difficulty less, thus a simple ford or boggy ground have no effect on their movement. 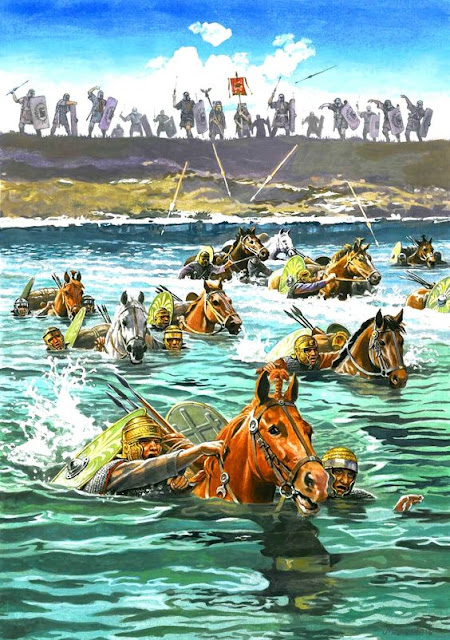 This added combat skill might of course be regretted for some Roman units when we come to do some Batavian revolt scenarios. 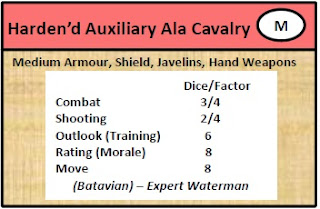 My auxiliary cavalry are from the Warlord range of figures and are finished off with shield and banner decals from LBM.

I am hoping to add a similarly sized group of Praetorian cavalry to accompany them before the game - more anon.

Finally it would be remiss of me not to say how much I am looking forward to the release of the Victrix plastic EIR cavalry planned to be rolled out in September so I hope to add yet more cavalry going forward. 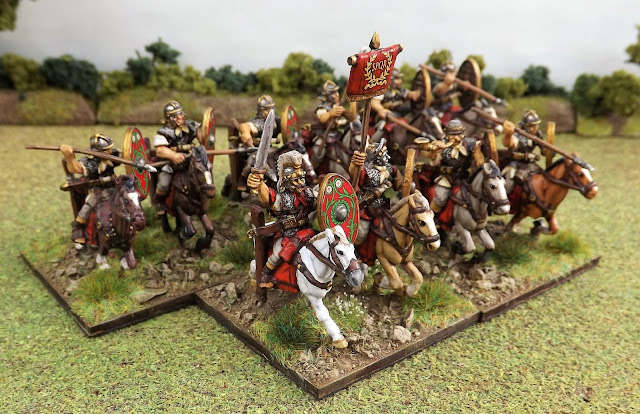 I'm off to London this week to watch England play India in the second test at Lords and to take in a bit of Roman Londinium. So that means more travel reports, a Roman supply column and some Praetorian Guard cavalry to show you, not to mention the first run out with the collection next weekend at the Devon Wargames Group.
Posted by carojon at 11:41