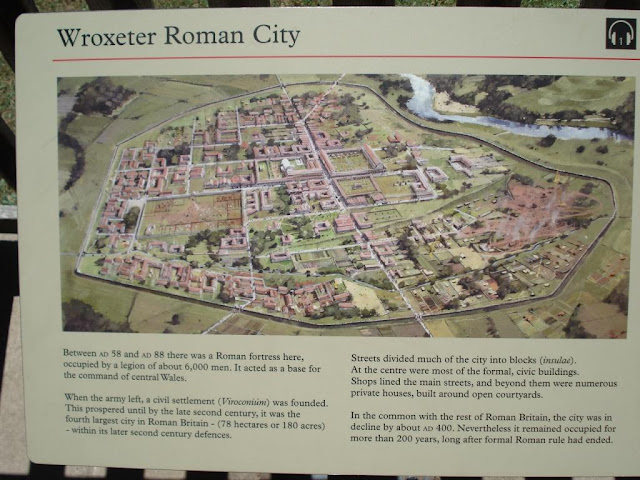 After visiting Stokesay Castle in Part One of his travels Mr Steve continues his journey with a look at Wroxeter.
Stokesay Castle - Visiting Shrewsbury Part One

Next up (after a pub lunch of course) was a visit to Wroxeter Roman City which is only six miles to the east of Shrewsbury. This was one of the main reasons for a return trip to this area as I just couldn’t squeeze it into the schedule on my last visit.

Known as Viroconium Cornoviorum it started life as a cohort camp on the Welsh frontier guarding a crossing point of the River Severn, then it expanded into one of the four major legionary fortress for ten years or so until that job was shifted to Chester. Afterwards as was normal throughout Britain the local tribe was then relocated to live there (hence Cornoviorum) and over time it became a prosperous city with an estimated population at one time of 15,000.

Run by English Heritage there is a nice gift shop as you go in which fortunately sells much needed ice creams as by this time I was starting to wilt a bit in the sunshine, I have found that prolonged living in Wales tends to reduce your resistance to the sun. As of 2018 the entrance fee is £6.80.

The description of the site being a Roman city is a little misleading as the only stuff that is above ground are the remains of the baths and gymnasium with the baths being the more substantial of the two.


Before visiting the baths you needed to work up a sweat and it was normal for the Romans to perform their exercise outdoors and quite frequently naked but as this is England they sensibly built something with a roof.


Looking up towards the tall wall on the right, you are standing at the entrance to the Basilica, the discs on the ground to the left and right are where the columns would have been and the height of the building can be judged by what remains of the supporting wall which is around 23 feet (7 metres) high. It would be in this covered hall that Roman men would carry out various exercises such as wrestling, lifting weights or gymnastics prior to heading into the baths. The less active would instead gamble, with knucklebones and dice being popular.

After exercising you would then pass through the now slightly enlarged doorway you can see in the wall and enter the baths. These followed the standard layout with the bathers moving from room to room experiencing the various temperatures in each one. A good scrapping down and oiling is essential and the same would go for the Romans, the audio guide at this point tells the old story about the Emperor Hadrian visiting the public baths one day. Whilst resting he noticed an old soldier using a wall to rub his back because he was too poor to afford a slave to do it for him, so Hadrian gave him some slaves and a large amount of money, the next time he went to the baths there was a crowd of men all rubbing their backs against the walls, he suggested that they should all rub each other down as there was so many of them. The audio tour is very good and is included as part of the entrance fee.

Next to the baths are a few shops and rooms and across the adjoining small road which is apparently Watling Street is a re-constructed town house that has unfortunately been built on the site of the forum. It is a good insight into what these houses would look like and they have made it multi-purpose by including shops and both poorer and richer rooms however most are as small and dark as you would expect. It’s a shame that you cannot see any of the forum apart from a few column bases which look oddly out of place.

The link below gives far more detail for those who are interested including the history of Wroxeter through the years. The Basilica may have ended up as a Romano-British Bishops Palace but eventually they gave up trying to repair all the huge buildings and just left.

Overall I was a little disappointed with Wroxeter as there isn’t much there, in my opinion the smaller Roman town of Caerwent is more impressive with much more to see and it’s also free to visit.

I believe Jon is hoping to pop in for a look around whilst on route to Chester so I will be most interested in what he thinks of Wroxeter Roman City.

This has been a day out with Mr Steve
Posted by carojon at 02:06