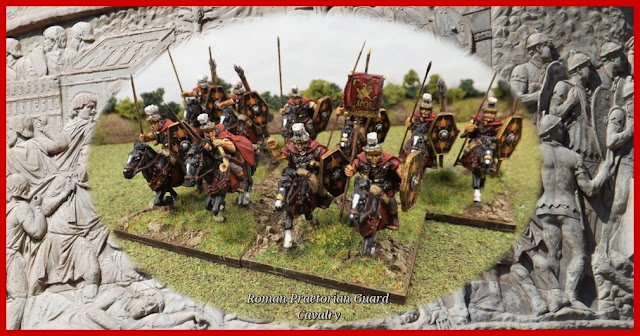 Last weekend I got to play the first game with the new Romano-Dacian collection at the Devon Wargames Group monthly club meeting.

I had hoped to showcase these two units before the game but I was away in London most of the preceding week and found myself getting the bases finished on the Guard cavalry the night and morning before going to club.


So both these units have been in a game, which you can catch up on at the DWG club blog, a little scenario entitled 'Hold the Pass'.
Devon Wargames Group - Hold the Pass

Much ink has been spilled postulating about the Praetorian Guard and its fighting role against its very well known political one, with Emperors made or broken seemingly on the whim of a force initially established to protect the man in charge. 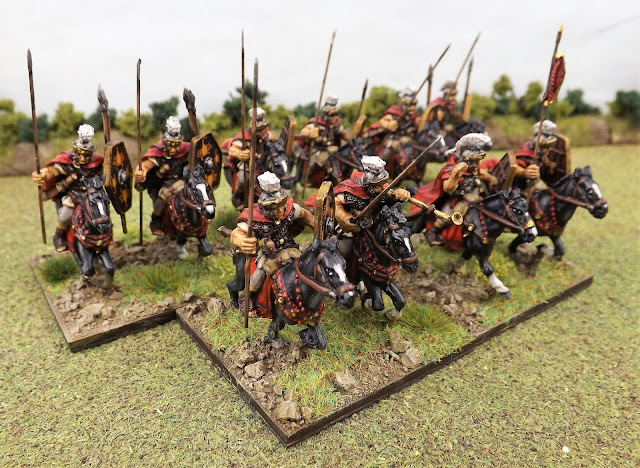 The Praetorian Guard have been considered by some commentators as more of a ceremonial formation rather than a fighting one, being the envy of other troops seeing them enjoy better pay, bonuses and a shorter term of enlistment.

However others see their combat role very much underestimated and place them in the category of the more traditional army reserve elite fighting formation.

The Praetorian Guard were involved in the first major actions against the Dacians under Emperor Domitian when an army led by Praetorian Prefect Cornelius Fuscus was heavily defeated in 87 AD and they were very aggrieved when Domitian was assassinated later in 96 AD.

This grievance vented itself on Domitian's successor Nerva who was forced to surrender one of the Praetorian Prefects, Secundus, suspected of involvement in the assassination, to them for execution and only preserved his own position by naming Marcus Ulpius Traianus (Trajan) as his eventual successor.

Trajan on his accession with the death of Nerva in 98 AD immediately stamped his authority on the situation by ordering the execution of the other Prefect and his supporters. 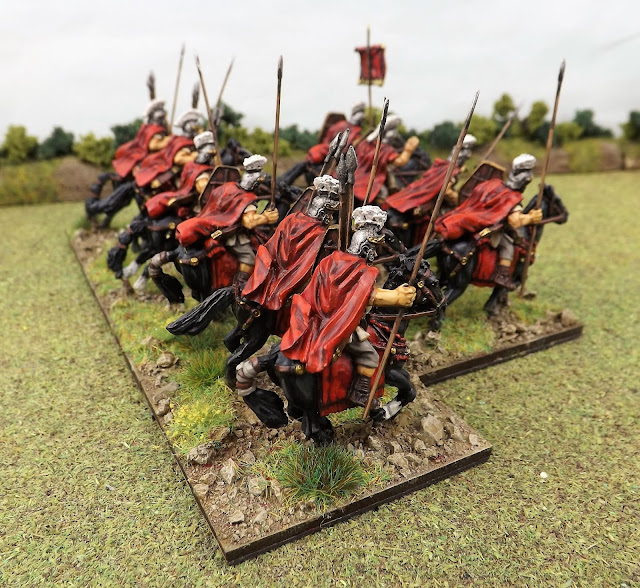 Trajan, it seems, was very much of a mind to deal with the Dacian problem once and for all and his two campaigns against them would see a massive mobilisation of the Roman military in the theatre which if Trajan's column is to be relied on featured involvement by the guard. 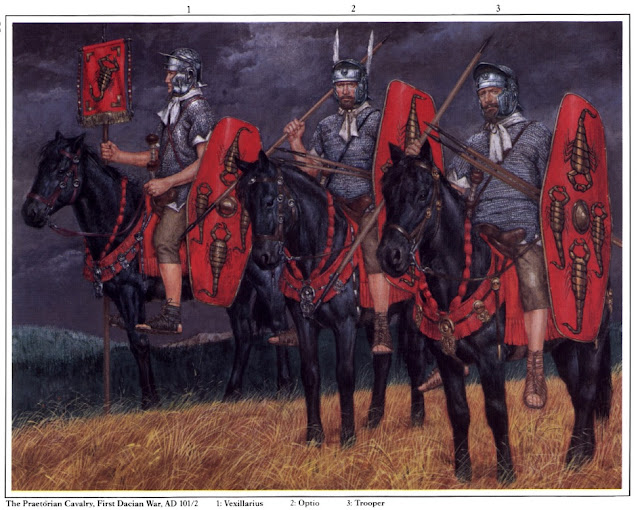 The principle inspiration for the look of my Guard Cavalry has been the illustration by Richard Hook in the Osprey Elite series 'The Praetorian Guard', which is also a great reference about the Guard as a whole and a recommended addition to the research library. 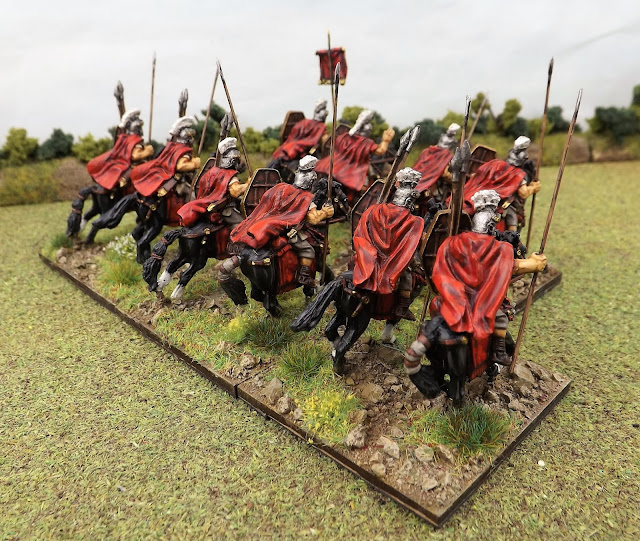 Some units adopted symbols associated with the birth sign of their founder with, for example, several Augustan legions adopting the half fish, half goat symbol for Capricorn. The Guard are associated with the scorpion motif which is thought to be a reference to their second founder, Tiberius, a Scorpio.


So are my Praetorians a bunch of ceremonial peacocks or a battle deciding elite?

Well it all depends on which Praetorian unit has turned up, with 'Augustus to Aurelian' allowing the chance for them to be not quite as good as they think they are.

As in my previous posts where I have illustrated the combat statistics for the game I thought it would be interesting to look at a so called elite unit and their abilities to inflict and take punishment. 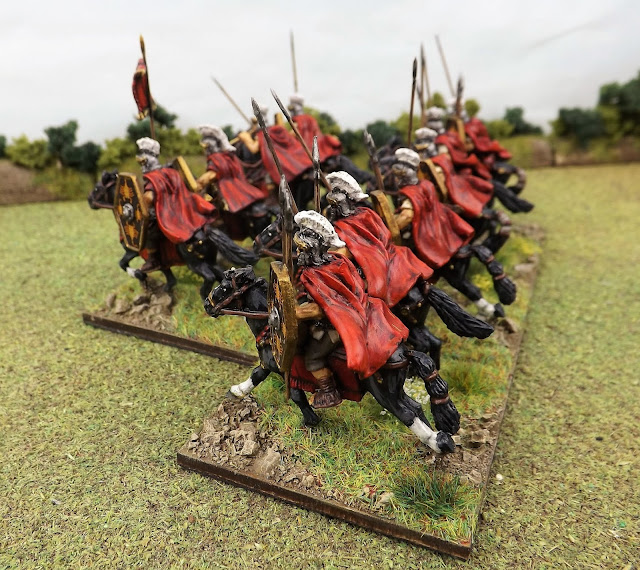 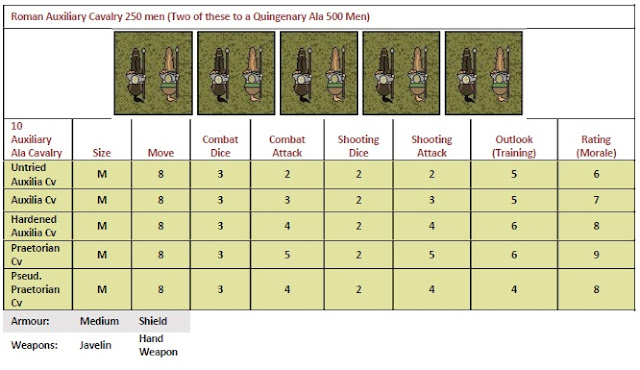 The table above shows unit characteristics for bulk-standard auxiliary cavalry rated as 'untried', 'regular' and 'hardened' versus the two flavours of Praetorians either palace guard 'Pseudo' or the real deal.

Immediately obvious is that the Pseudo option are still pretty good, rating alongside hardened or veteran auxiliary cavalry for combat and shooting effectiveness using the five column on the combat table below for both types of attack before modifiers which means they hit on 8 or less with a d10 against an unarmoured target, rolling three dice in combat and two in shooting.

However a comfortable life in the Rome garrison has had an effect reducing their outlook to just 4 meaning four hits will cause them to go shaken.

As can be seen the Praetorians proper are a potent unit with improvements in combat and morale over veteran hardened auxiliaries. 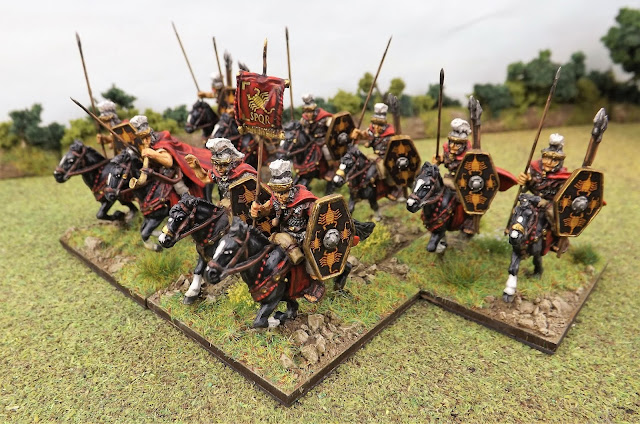 My Praetorians are from the Warlord Games range of figures using shield and banner decals from Little Big Men.

To add to their look as an elite unit I have chosen to follow the Osprey illustration and have them mounted all on black horses. In time I will do a second unit of ten to produce a full ala of about five hundred men. 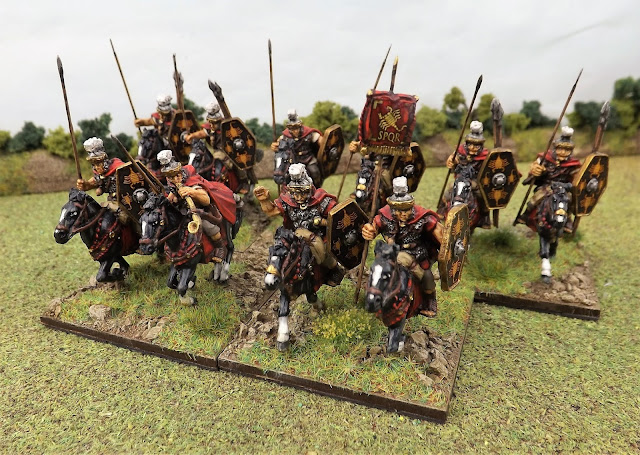 One of the great advantages and features a Roman army of the Principate had over most of the foes they faced was the ability to supply their troops from a series of depots and magazines stretching back to the food baskets of the empire focused on keeping their armies in the field and able to fight. These supply lines form a ready source of scenarios covering the battles to keep them intact.

In addition, the Sarmatians, a steppe people, travelled with their families and belongings carried in wagons with the famous 'night battle' illustrated on Trajan's Column showing the carts and wagons in the midst of the fighting troops.

When building this collection I really was keen to include this aspect into the game and so I wanted some supply wagons to feature occasionally when called for. 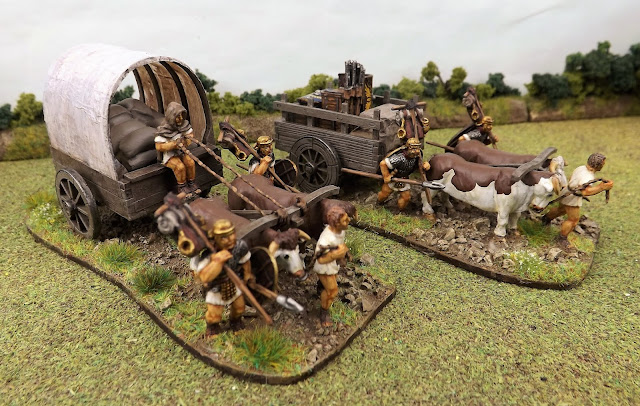 Colonel Bill's Wargames Depot have put together a great and affordable range of their own MDF wagons together with the lovely models from 4Ground and offer a comprehensive range of loads, crews and draught animals to complete them.
https://www.colonelbills.com/ 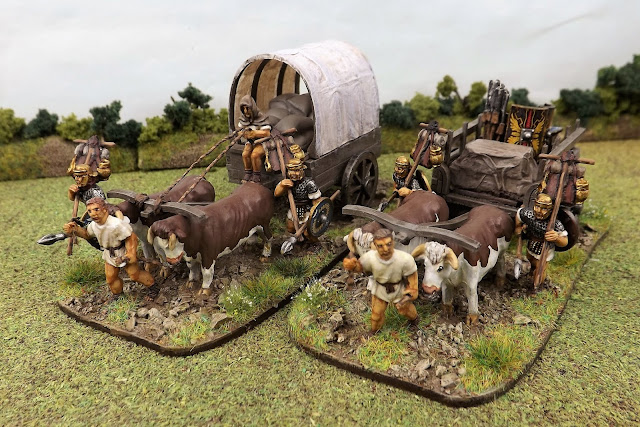 These particular models are the 4Ground offerings kitted out with Roman wagon teams and escorts and some appropriate loads. 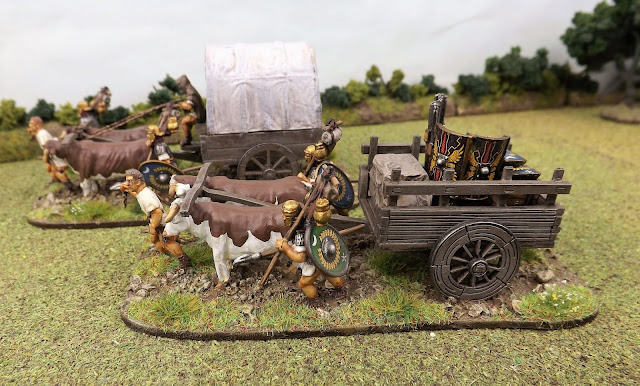 The covered wagon has a tilt made from roll up cigarette paper which is just perfect for the job and I have mounted the wagons on the MDF vehicle bases supplied by Warbases.
Warbases - vehicle bases

Just to complete the look, I replaced the shields provided with the auxiliary escort with some Warlord ones I already had decaled up in the spares box. I then made some scratch built boxes covered in a tarp from some more cigarette paper, which you can see in the front and back of both wagons and have them looking fully laden.

The weapons load had the shields decaled up with Warlord and LBM decals and I added some brass rod nose rings to my oxen so I could attach my leads to the two drivers. 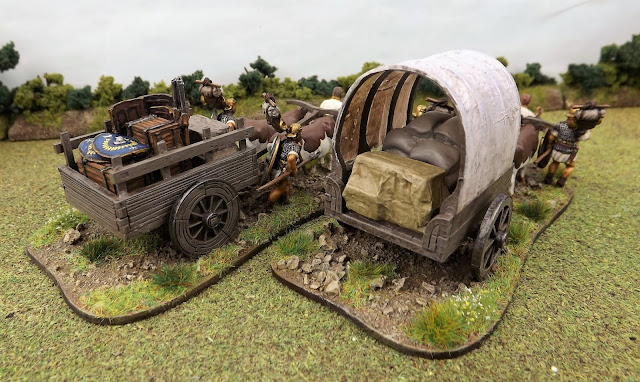 I had never built any vehicles in MDF before and was very impressed with how easy and well they went together and how easy to paint up and modify, with my covered wagon getting a bench seat for the driver added.

I aim to add four more wagons to the collection with some kitted out in a more tribal look which can be added to the Roman column as impressed locals or be used with my Dacians and Sarmatians as required.

In addition I have some mules loaded up with legionary kit to follow along and so plan to have an attractive table-top target for future games. 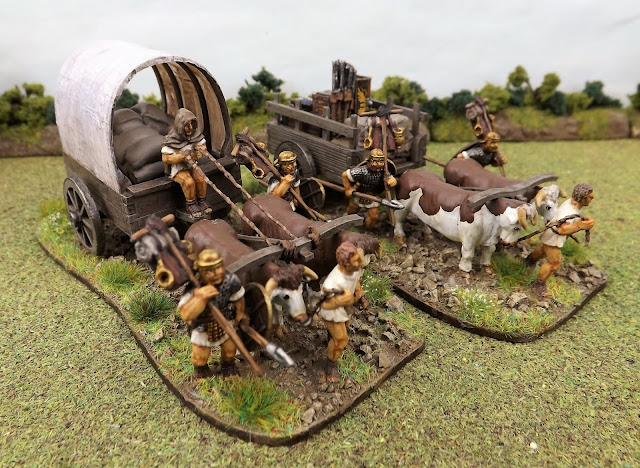 Next up more travel reports from myself covering our trip to Chester this month and Mr Steve's visit to Roman Viriconium (Wroxeter).
Posted by carojon at 01:49