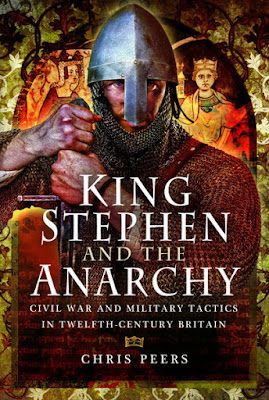 I am sure that you all do the same thing as I do when you get a new book in your hands for the first time; you flick through looking at the chapter headings, the pictures and the maps to get an initial feeling about it. When I did that to this book I got a little uneasy, for a start it’s far shorter than I like , then I saw the maps included in the book and …., well we will come back to that at the end and the pictures whilst they were all in colour aren’t all that inspiring.

Now that I have read it, its not that bad, for a start the writing style is good and it flows very well, the topic is fully covered and all the major events are included but it is a little strange.

Following a short introduction there are then 13 chapters, a conclusion, some brief biographies, a source list and an index.

The first few chapters outline the political situation leading up to the disputed succession of the throne upon Henry I’s death in 1135 and then what happened immediately afterwards. It outlines the two main contenders Stephen of Blois and the Empress Matilda along with their claims and key supporters. There is quite an interesting chapter on “Disorder in the West Country”, Henry’s death suddenly gave an opportunity to all those nobles with designs on their neighbours lands to quickly start grabbing especially whilst King Stephen was busy elsewhere trying to consolidate his power base. Unfortunately a good way of showing others that you are now the man in charge is by chastising disobedient nobles, so the King raced down to Devon and laid siege to Exeter. He caused such a good impression that the name Stephen is still staggeringly popular in the area today ( I am not sure this is true. JJ)

Now the book wanders away from the action or is padded depending on your point of view.

Chapter Four : “The Armies of England”

Even Chapter Five ,”Wales Liberated” is tenuous although I can see the link to the break up of  control caused by the Anarchy. It does fit quite well with the next chapter “Scotland Resurgent”, the two chapters main point I suppose is that Stephen had to temporarily relinquish non-core parts of the kingdom whilst concentrating on first of all winning control of the throne. 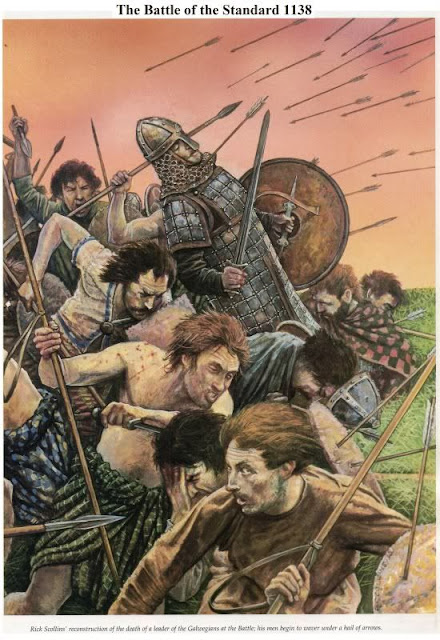 Chapter Seven : “The Battle of the Standard “ is another self contained piece getting thirteen pages and continues on to explain how King David was given large swathes of Northern England to ‘look after’ as Earl of Northumberland rather than directly being ceded to Scotland.

We get back on track with Chapter Eight : “Matilda and Civil War in England” with the Battle of Lincoln ( Chap. Nine), its aftermath and the capture of King Stephen. Matilda and her followers look like they are about to win until the debacle of the Siege of Winchester (Chap. Ten) which disperses their forces and allows Stephen to be exchanged for Robert of Gloucester his main opponent.


Chapter Eleven is mainly about King Stephen dealing with the independent nobles around England who had broken away in their own little territories, usually because he had previously upset them at some time or other.

Chapter Twelve is bizarre : “Svein Asleifsson and the Earls of Orkney”. I have no idea why this chapter is in the book as it has no relation to events down south and even the tiniest possibility that it is an example of a different sort of Anarchy which just happened to be occurring at the same time is hard to make stick. It is however a very interesting chapter and might be one of the best ones in the book, I thoroughly enjoyed reading it.

Chapter Thirteen: “Henry Plantagenet” wraps up the story with events that lead to Stephen being recognised as sole King and Henry being his successor, I didn’t realise that as a young man Henry II had come across to England in an attempt to help his mother. He tried to seize the castle at Purton and the town of Cricklade near Cirencester from Stephen as both bordered Matilda’s power base of Gloucester, unfortunately it was a fiasco and King Stephen kindly lent him the money for his passage home.


I cannot find any mention of a castle at Purton, even the outstandingly excellent Castles of Wessex by Mike Salter only mentions defences at Cricklade and “Nothing remains of a castle built by Matilda's supporters in 1144” ( his books are ridiculously cheap on Amazon). The OS map does show a couple of nearby moats but nothing else.

The short conclusion is scanty as most of the topic has already been wrapped up, it does explain what happened to Stephen's children which was informative and then you get “Who was Who in the Anarchy”, four or five lines of people who all appear to have the same first name with a town as a surname, there’s at least eight Roberts.

Its an odd book, there is detail in places but not enough in others, what battles that took place are covered but not in much depth, sometimes its just a mention of two sides fighting. I understand that quite frequently all we have is that the King fought someone at someplace and he was victorious but this isn’t one of those books where the author has gone the extra mile to flesh out things. Quite frequently it mentions that the King then built a castle nearby to contain the enemy, well where was it ? What was it called and in one case he even built three, none of which are named or located.

I also realise that Normandy is outside the scope of the book but I am sure that a chapter on how Stephen lost control of this valuable area would have been more relevant than on one on an Orkney Viking.

Overall its OK, you get the impression that King Stephen wasn’t that bad a king, he was quite good at winning battles as long as he wasn’t facing Richard of Gloucester who always defeated him and he was quite a brave warrior. He was also quite decisive in his actions and didn’t dither when action was needed, he just wasn’t that good at ever finishing anything he started.

So apart from not a single mention of Cadfael my main complaint yet again is about the maps. This time I would go as far as saying that if I was Chris Pears I would be embarrassed to have a book with my name on it which had these maps inside.

Map One : England in the time of Stephen. This is an outline map of England with 21 towns marked with dots and another dot for the Battle of the Standard, nothing else.


Map Two: Medieval Orkney, if you want to know what each stretch of water is called between the islands then this is the book for you.

No Maps of the key battles mentioned, The Standard or Lincoln, no maps showing other key action areas, no maps of the regions fought over that otherwise get many pages in the books, no campaign maps with little arrows perhaps, no map of Normandy, no map of the key events at Winchester, no map on the events in Wales or Scotland or the North, all of which get chapters to themselves. Any two of the above would have been better than what is in the book and it's not as if they are trying to squeeze everything into a limited space, I would have been more than happy with just half page versions if need be.

I know we always complain about the maps in books nowadays but this is the worst yet.

As I said at the start, it reads easily and covers the subject, I think there is still another book out there which will do the period of the Anarchy better and in more detail but if you can find this book in Hardback discounted to £8-£9 then its worth getting.

This has been a Mr Steve Presentation

Next up - more Romans, historical visits to Chester, Stokesay Castle, Wroxeter and Chester
Posted by carojon at 23:56