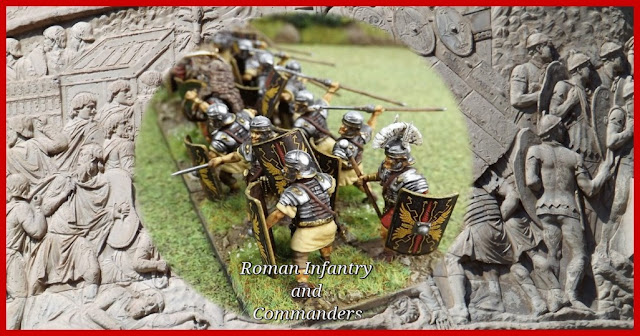 As I write this post I am sat in the centre of Roman Deva, now known as Chester and the former base of the XX Valeria Victrix, victors over Boudica at the Battle of Watling Street, so what better time than to introduce the latest additions to my Roman force.

With the core of my Dacian force put together it was time to look at adding some additional punch to my Roman force.

Roman punch doesn't come more emphatic than a cohort or two of legionaries and my force now has two with the addition of a second consisting of the Victrix attacking legionaries. 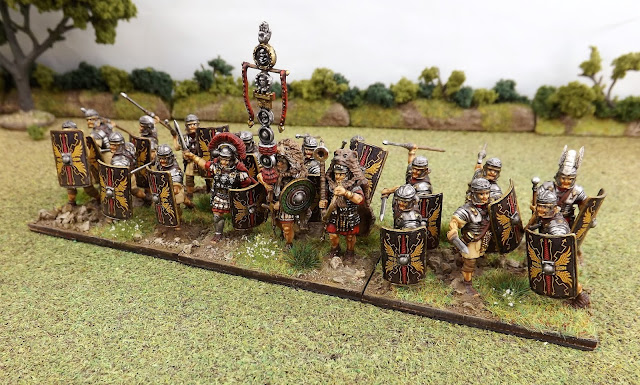 More animated than the standing cohort, these chaps are shown thrusting with gladius, punching with scutum and preparing to let fly with a volley of pila. 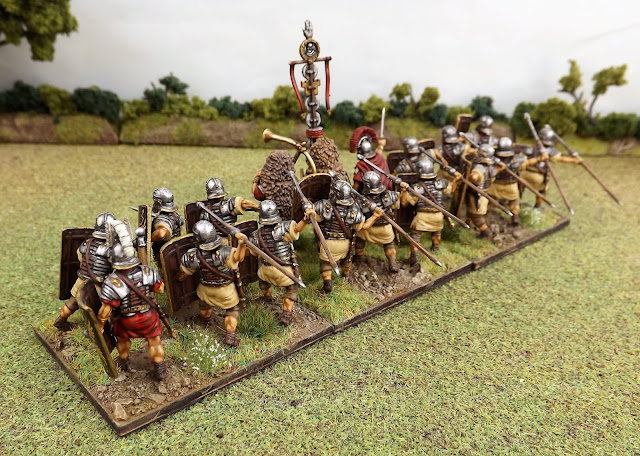 I really love putting these figures together which offer loads of options to vary the look of each unit and make them unique to your force, not to mention, buckets of detail to get a paint brush around. 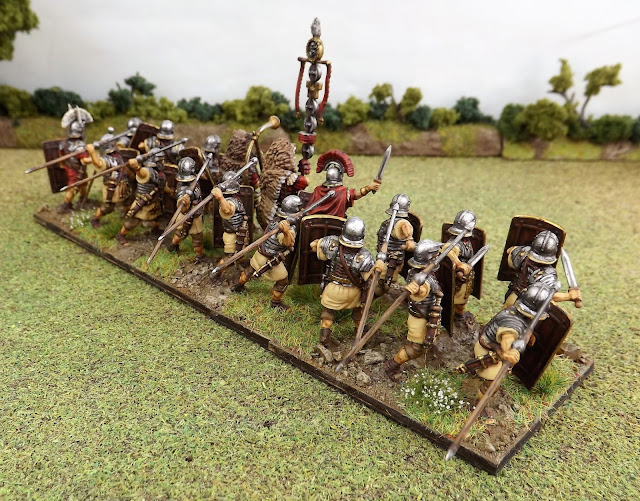 In time the plan is to build fourteen of these cohort groups so we can do some big table games of Roman vs others or Roman v Roman.

These cohorts come in three flavours using Augustus to Aurelian (AtoA). If you want to compare them with the Light Dacian units you can see their stats in my previous post

The first option is the occasional 'untried' cohort, trained in which end of the gladius to use but not yet tested with looking down the 'nasty end' of a Dacian warband.


As explained in the previous post the combat table in AtoA is used in both hand to hand and shooting calculations and works by finding the indicated combat or shooting factor across the top to find the column you are working with. Then simply read across the target's armour rating to find the basic score or less on a d10 needed to cause a casualty. Any additional factors simply move the column left or right. 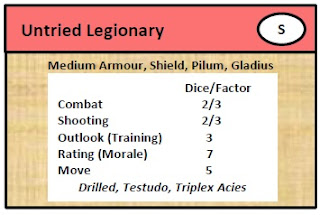 As well as getting to lob their pila as part of the combat calculation, these chaps get to roll 2d10 on the combat table with a factor of 3 meaning before any additional factors have shifted columns right or left they cause a casualty on a 6 or less on each d10 rolled against unarmoured Dacians, which most of them are.

The pila are, as you would expect, nasty, effectively allowing the cohort to roll 4d10 on the first round of combat only and they ignore the target being shielded. If the combat should drag on into subsequent rounds, they then get to work with the gladius which adds a further d10 to their Combat Attack roll, bringing it up to 3d10 from then on.

With an outlook of 3 they can't afford to take three or more casualties themselves so rely on getting the combat won quickly or getting themselves replaced by a follow up cohort in the second line; and with a Rating of 7 they are pretty good at performing reaction tests when required needing 7 or less on a d10 before adjustments.

If you also note their 'Drilled' and Triplex Acies' qualities, it makes it much easier to pull these chaps in and out of a combat, replacing them with fresh cohorts as and when required. 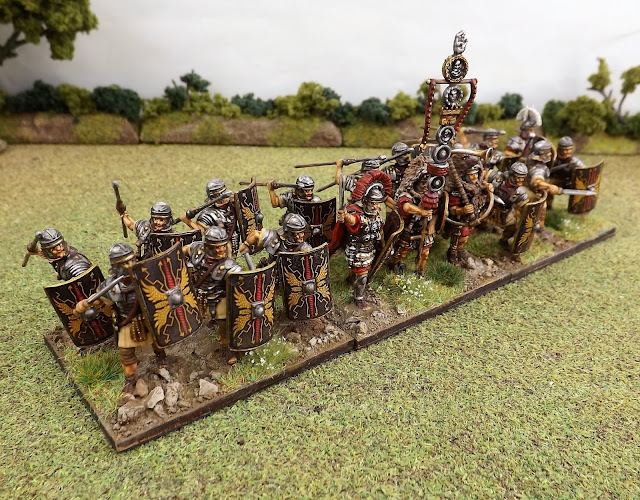 The bulk standard trained cohort, with a modicum of combat experience among the centuries just adds to the concerns of any Dacian commander by improving the odds in terms of causing casualties on the enemy by another 10% on each combat and shooting attack, whilst also gaining a more robust reaction profile. 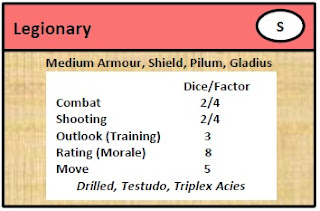 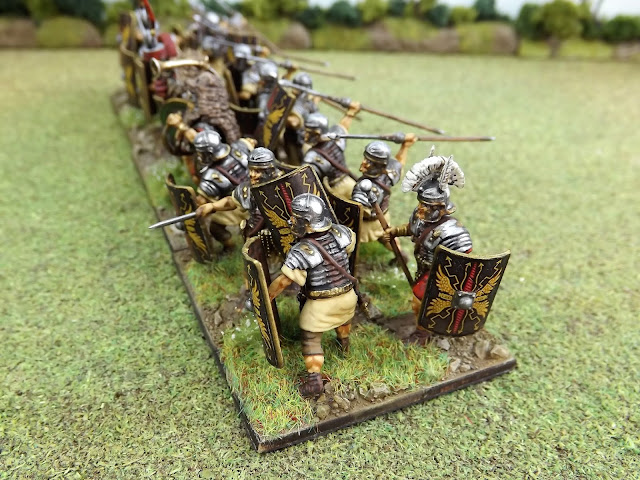 The hardened, probably veteran, cohorts are even better and if forming a first cohort with an additional 350 or so legionaries would add another d10 to those combat factors with a Rating that means they don't know when they are beaten. 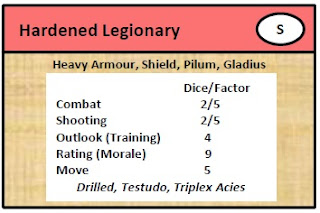 As well as infantry reinforcements I needed some commanders to lead my troops in the upcoming game so put together another four command groups, with a mixture of Wargames Foundry and Warlord general officers. 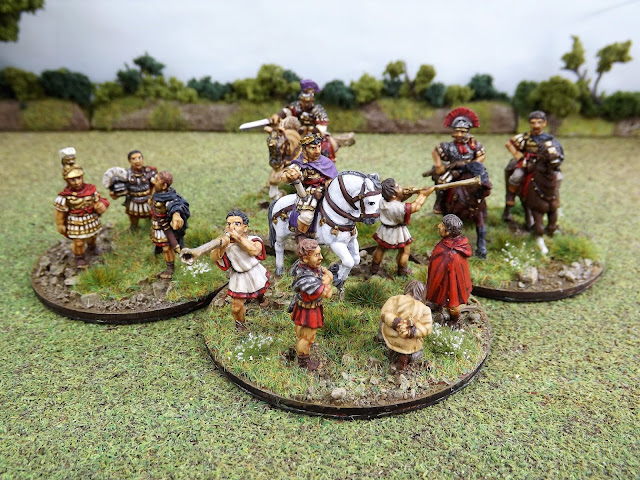 With the Emperor Trajan foremost among Rome's warrior emperors I was keen to use the Foundry offering, here mixed in with figures from their Suetonius Paulinus group. 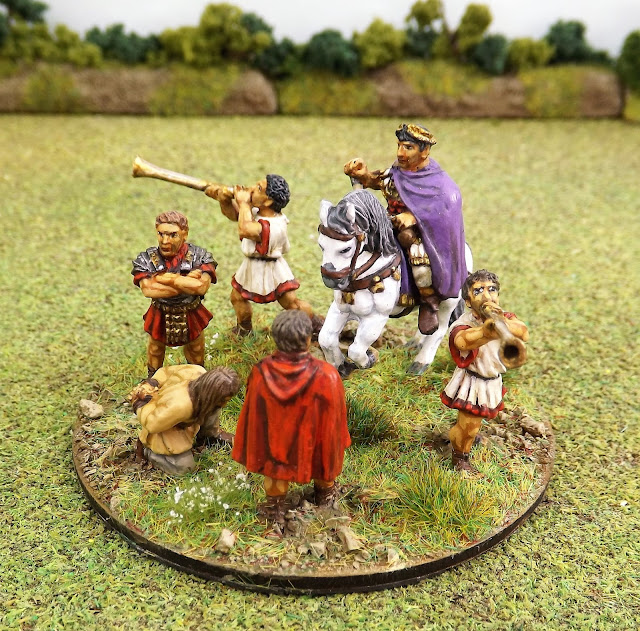 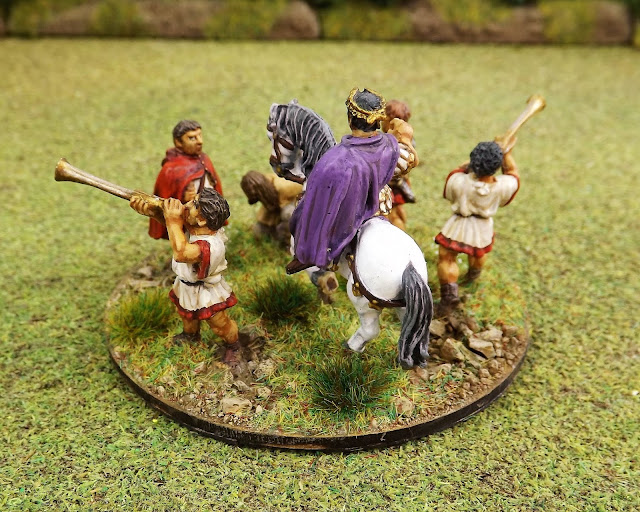 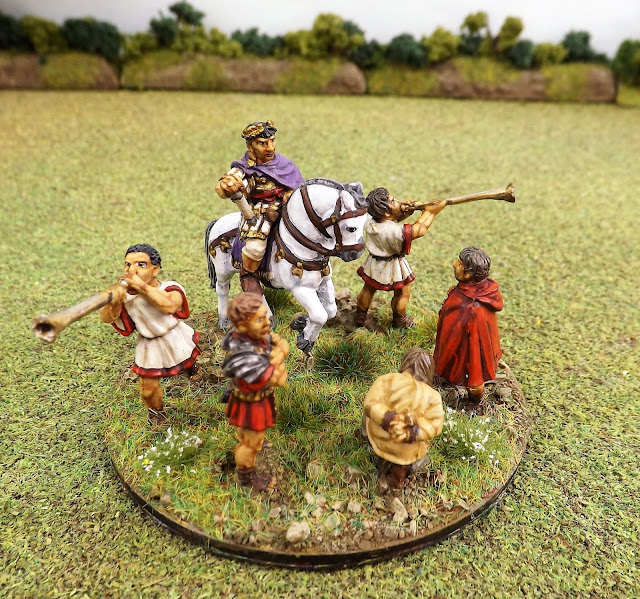 Paulinus ended up (centre) as a mounted Roman Legate accompanied by his Primus Pilus. 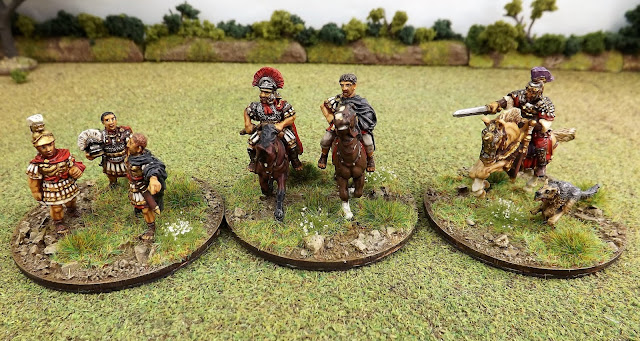 The two on foot general officers (left) were taken from the Trajan group and added to one from the Paulinus group to make a suitable mix of narrow and broad stripe tribunes as another command group. 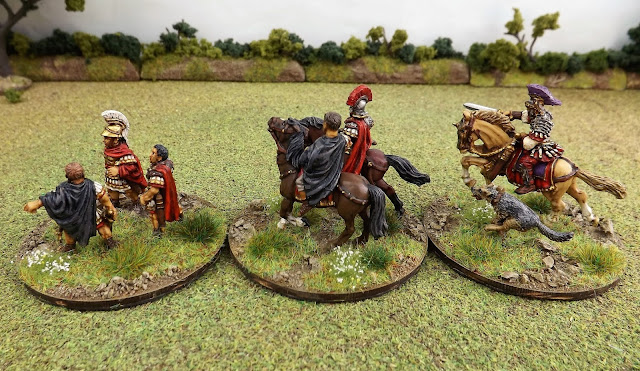 Finally on the right I used the Warlord charging cavalry commander, another tribune, indicated by his purple helmet crest and saddle furniture accompanied by his fearless war-pooch. 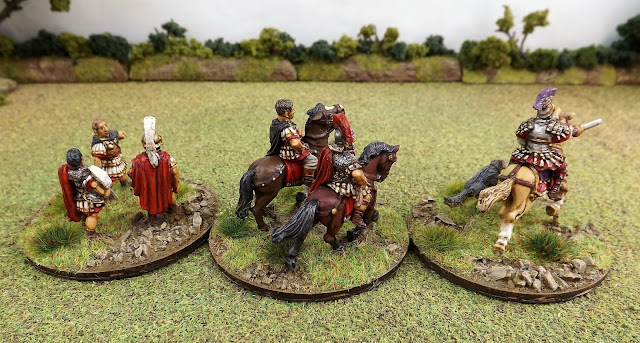 These command groups will I hope, be soon added to with the forthcoming offerings from Victrix which I am eagerly anticipating. 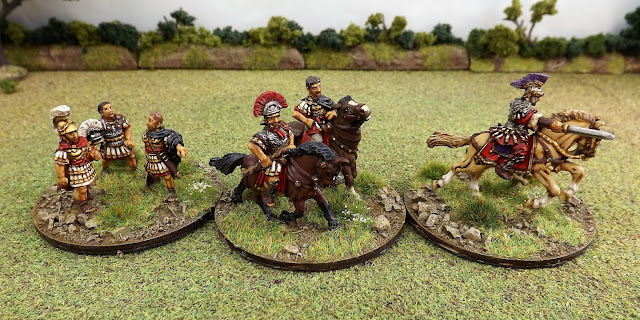 Last but by no means least I have added a couple of Auxiliary units in the form of these skirmishing archers and slingers.

The western archers can be combined into two units of eight to form a sixteen figure formed unit rather than the smaller skirmish one seen here, allowing them to fire massed volleys of arrows and if necessary defend themselves with their armour and gladius short swords.

When used as skirmishers as here their added weaponry and armour makes them formidable against other skirmishers in combat should the opportunity arise. 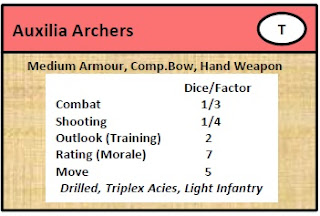 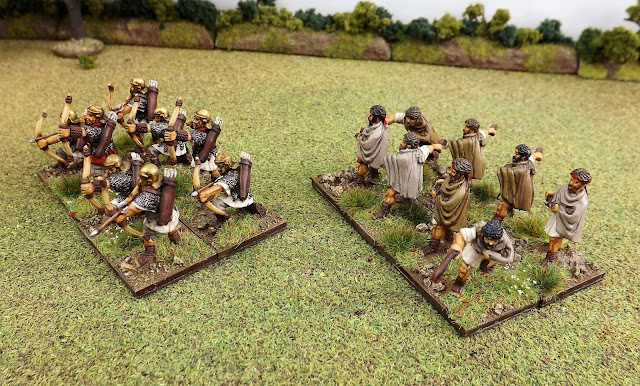 The slingers are definitely a skirmish unit only as their lack of armour does not incline them to getting in, up close and personal, much preferring to bring their skill at arms with sling and bullet to bear and at range.

Slingers have the benefit of negating shields used by the target as the sling bullet was not easy to see in flight and thus known to cause casualties on first shots because of the target being unaware of the bullets until the first casualties went down. 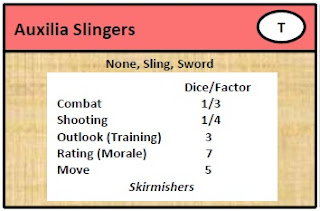 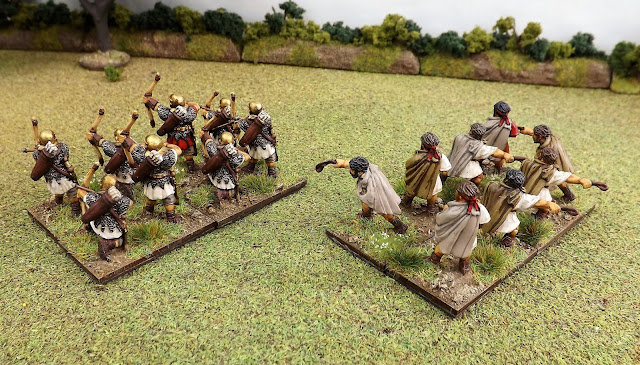 Both these groups of figures are from the Warlord range and come with a nice amount of detail in their sculpts if very slightly diminutive to the Victrix legionaries, which may in time cause me to bolster their ranks with slightly bulkier offerings from Aventine and Black Tree. 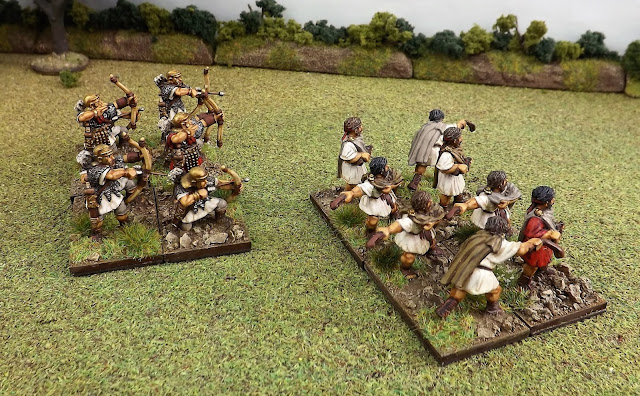 To give these chaps a bit more of a Roman character I decided to give them a commander indicated by one of their number being clad in a suitably red tunic. 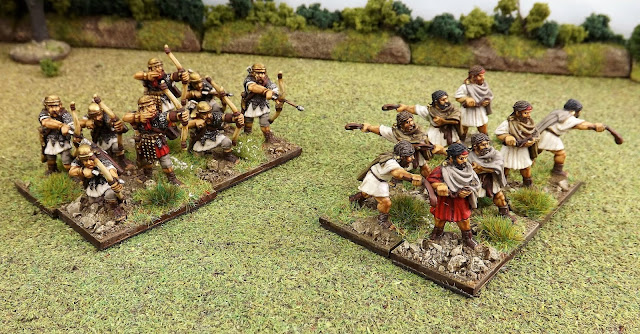 Next up travel reports from Mr Steve and myself, plus more Roman additions to the collection.
Posted by carojon at 23:52