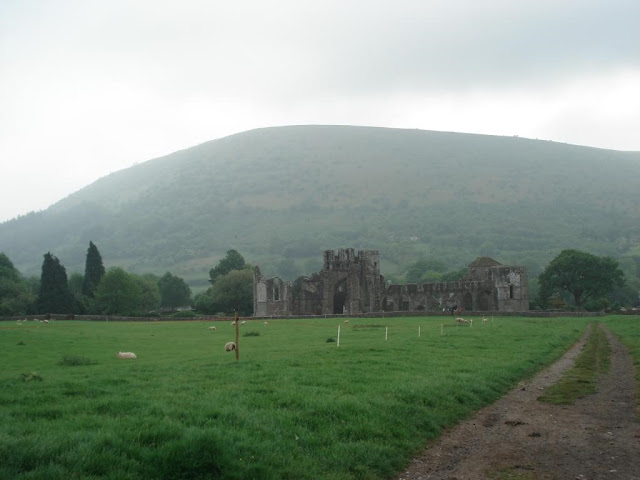 Priory location can broadly be sorted into two camps, either they are in a town where you can get easy access to food, money, recruits and patronage or they are in the middle of nowhere where you will be left alone to get on with important monk stuff well away from the evils of man.

Llanthony Priory is one of the latter , a little to the north of Abergavenny and then roughly six miles from the nearest modern main road it is hidden away in a steep sided valley and even today it’s a bit of a chore getting too it.

In very simplistic terms the best way to go about founding a religious site would be to find a wealthy lord and mention how much nicer it would be for him to spend the afterlife in Heaven strumming away at a harp rather than spending an eternity in Hell having little devils constantly sticking pitchforks into his backside and not in a nice way. However if he could see his way to giving you some free land for a new church then you would be able to put in a really good word with God on his behalf and then every so often just pop back to remind him about those pitchforks and how it would help his salvation if he maybe donated another farm or two.

Or secondly the land owner would reach this conclusion by himself and fired up with religious zeal go and found his own site and then ask the local Bishop/Abbot for some surplus monks to run the place.

So according to the display boards and the internet this is exactly what happened, at the start of the 12th C a local lord, William de Lacy whilst he was out hunting one day found an old ruined Celtic chapel and decided to re-purpose it into a small church, later he had it enlarged into a larger priory which he then asked the Augustinians with around forty monks to run for him. These original buildings were however destroyed after only thirty-five years by the hostile natives who for some reason didn’t like the English and in a strange twist the monks who had legged it to Gloucester as fast as their sandals could go, founded a new priory in the city instead of the other way around.


In the following century once it was a little bit safer, a descendant of de Lacy decided on a grand re-building of the priory, the remains of which we can see today and he sent a message to Gloucester asking for a fresh batch of monks to be delivered. Despite the occasional attack from Owain Glyndwr the priory thrived but its importance and wealth slowly diminished over time until by 1504 there were only four monks left. Come the dissolution in 1538 the whole site was sold for £160. 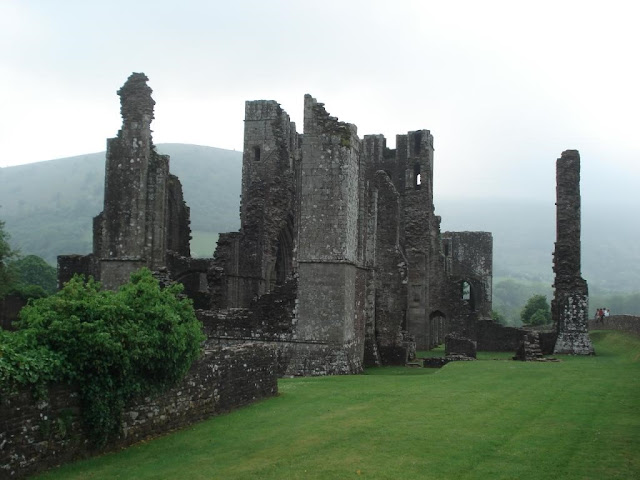 Entrance to Llanthony Priory ruins and car parking is free and the area as a whole is quite popular with campers and back packers for which there are several locations nearby, there is a small hotel within sight or you can even stay in the farmhouse which was built onto the priory at a later date. The medieval infirmary has been converted into a still functioning church and perhaps of more interest is the cellar bar inside the priory grounds itself where you can get a beer and I think food.


Talking of beer, I guess you know what’s coming next.


Fortunately for me this area has one of my four favourite Welsh pubs and it’s a welcome drive out whenever possible for a Steak pie and a decent beer. The area as a whole has many items of interest in the vicinity to prompt such a drive, the pub is on the Offa’s Dyke trail and White Castle is very close by which, along with its compatriots Skenfrith and Grosmont make up the Three Castles lordship, there is even an established walk of eighteen miles which takes them all in.

Also less than a mile away to the north is the 1404 battlefield of Campstone Hill which took place as part of Glyndwr’s rebellion, I couldn’t be bothered to photograph another empty field especially as it’s not obvious which field it should be so here is someone else’s picture.

And to save you having to look it up, here are the full details:
The Welsh under Owain Glyndwr were heavily defeated by an English force here in June 1404:
"The young earl of Warwick . . . won a victory over the Welsh at Campstone [Hill], not far from Abergavenny, which set a check to the designs of Glyn Dwr in the neighbourhood."

This battle does sometimes get rolled into the Battle of Grosmont of 1405 but the current opinion is that there were indeed two battles in two different years but then again maybe not and one was just a continuation of the other. The link below is from the Gwent Local history page and has an article written by Nick Thomas-Symonds.

Fortunately as I have been to this area many times I had some older photos available that I have used hence the sunshine in some pictures. For those who care, Skenfrith castle was used for the Doctor Who episode “Amy’s Choice” with Matt Smith.


After visiting the priory the plan was to drive onto one of my favorite castles at Longtown which is only a little way up the road and which coincidentally has another ruined priory near-by but this one being very much smaller and way less important than Llanthony. It is also barely above ground and on private land so don’t add it to the visitors list.

Unfortunately the low cloud didn’t look like it was going to lift any time soon so Longtown will have to wait for another day and another steak pie.


Finally for those of you who watched Tony Robinsons TV programme last year about walking Offa’s Dyke, the church he stopped off at to see an early 15th C medieval wall painting of St George and the Dragon is St Cadocs which just happens to be right next to the pub as you can see.

This has been a day out with Mr Steve

Next up JJ gets to see Furioso, the Renaissance rules from Alternative Armies, played up at Chez Chaz, plus work continues on Romans and Dacians
Posted by carojon at 05:14