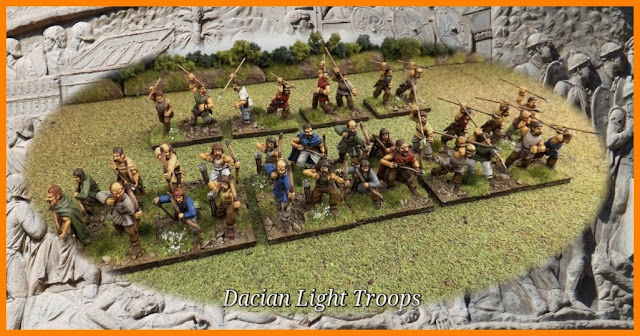 It was back in mid June that I last posted on progress with the Roman-Dacian collection, mainly down to my focus on getting the first units pulled together to run my first game with them at the Devon Wargames Group 'Clotted Lard' event to be held in September.

As the weeks get ticked off and my intent to run a practise game or two in August to test run my scenario plan I have focused as much time as I can on the painting desk to help deliver the project.

So the last post left off with four warbands and a general officer completed. I had hoped to get another two warbands done but with work on the Saxon/Viking collection earlier in the year that seems unlikely now and so I decided on getting the balance of the Dacians finished before turning to the Romans.

So first up we have four units of Dacian skirmishers or light infantry armed with javelins and bows.


These chaps will operate in 'tiny' units as defined under Augustus to Aurelian which equates to eight figures in each. 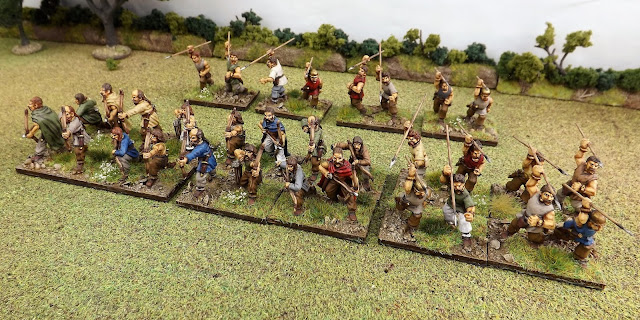 The examples of my unit cards, that I have created for player reference, details the effectiveness of these units. 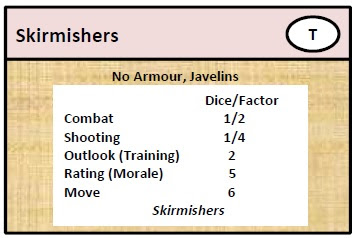 The table below illustrates the use of these factors with a shooting factor of 4 using that column against the armour of the target, showing the less than or equal to D10 score required to obtain a hit.

The table is also subject to adjustments in column shifts left or right according to factors that could influence the attack be that range, movement or, in a combat situation, factors such as attacking from the rear or flank etc.

Other factors on the card show the 'Outlook' which is a simple measure of the unit's training affected by size (these units represent about two hundred men), with tiny units such as these often being quite low at 2 which means that when two casualties are inflicted on them they will become 'shaken' and all the problems that that term implies.

Finally we have a movement rating of 6 which is six inches, a little bit quicker than most formed types which usually come in with a five inch move. 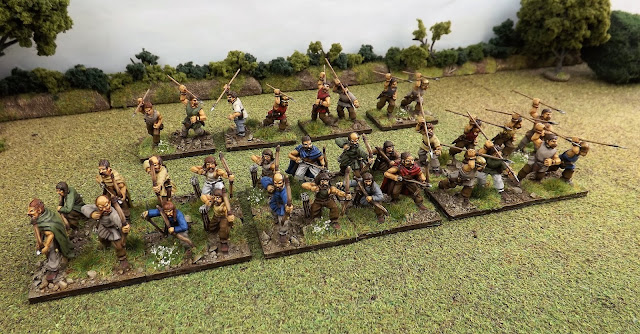 My Dacian skirmish bands are using the 28mm figures in the Warlord range which I think offer a nice ready mix of poses and suitably irregular looking warriors.

Following on from my previous post showing the Dacian warbands with my first commander, I have added another three command groups on foot.

These figures are from the Wargames Foundry range and I picked them up on our recent visits to the shop on our last two trips to Partizan. 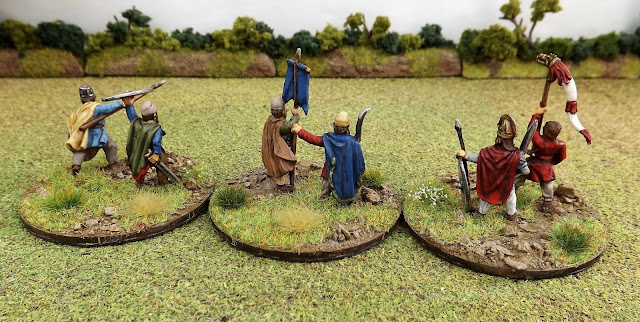 The figures work well with the Warlord range and I intend to add a standing and mounted King Decebalus group to finish off my command teams. 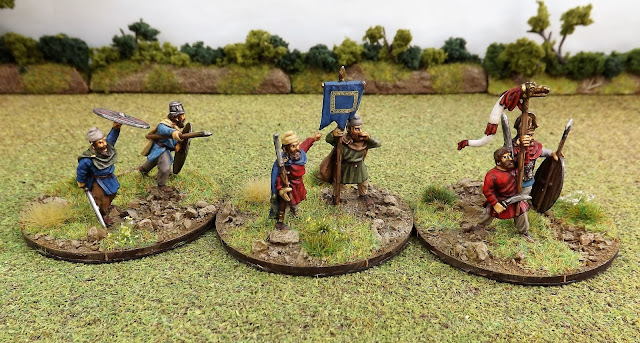 Finally to complete my Dacian force I have put together two Scorpio bolt throwers which should help to convince any Roman commander not to linger too long before moving into combat. 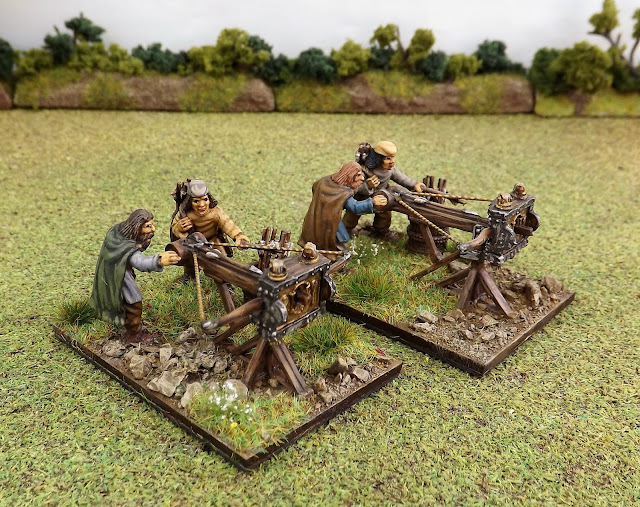 With shooting factors similar to the skirmish units, the Scorpios offer the Dacian commander a chance to start picking away at formed Roman units at a much greater range, up to a maximum of 36 inches, which could have any Roman unit caught in the open forced to endure several rounds of annoying fire. 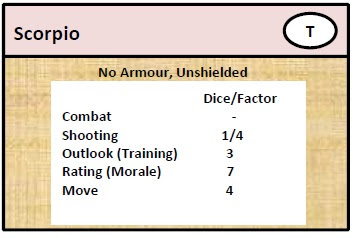 Probably even more annoying to the Romans is that a fair proportion of these weapons were likely manned by Roman deserters using technology supplied as part of a rather badly negotiated peace treaty. 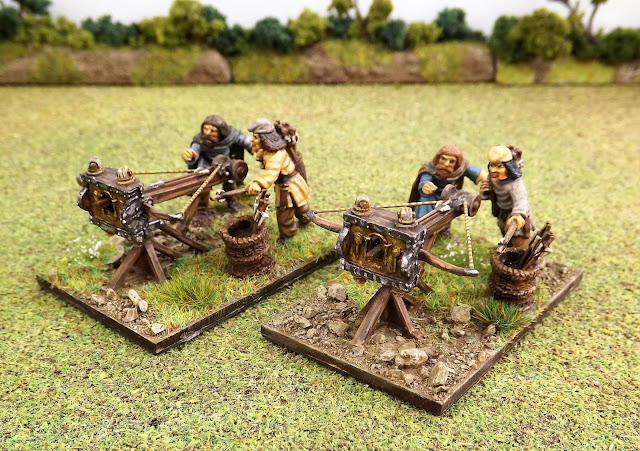 Again these figures hail from the Warlord range and though limited with just the two poses of figure make a nice addition to any Dacian force. 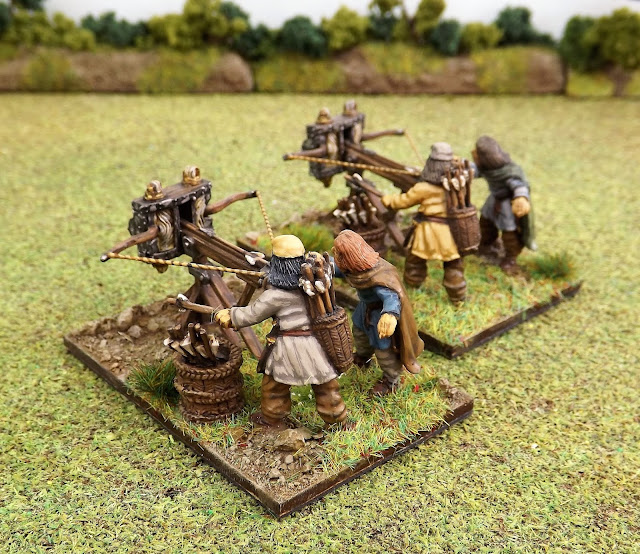 I decided to liven up my scorpio models by adding some taught bow strings made from brass rod to imply the death dealing missile about to be launched. 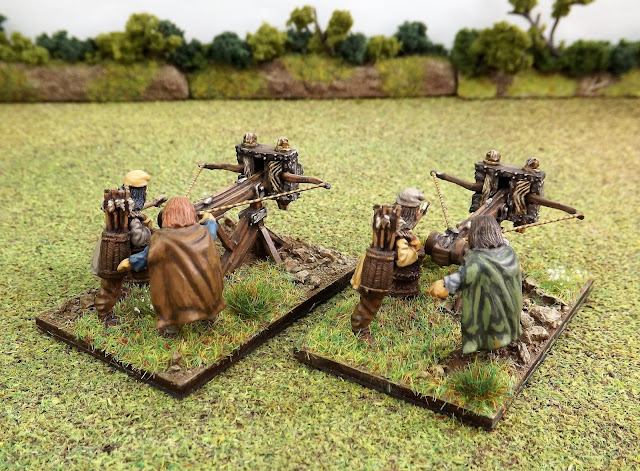 The way I like to build new collections of figures is all about getting a suitable group of representative units together to allow me to start playing sooner rather than later and this initial group of Dacian units is about a quarter of what I intend to build but form a good core to develop some smaller games around before getting to a position to turn out some much bigger games.

So with this post I will leave the Dacians and turn my attention to the units I have added in recent weeks as part of finishing off a suitably sized Roman force to take them on with. 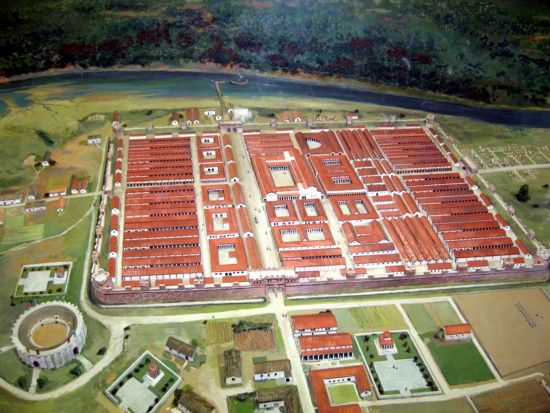 I am off to Chester or should I say Roman Castra Deeva at the weekend, home base of the XX Valeria Victrix Legion and the final major Roman base visited after trips to York and Caerleon, home bases of the other British legions reported about here on JJ's.

So that would seem like a good time to start showing you the additions to the Roman collection along with posts about our trip and another really interesting visit we made to the Butser Ancient Farm in Hampshire a few weeks ago.
Posted by carojon at 07:56