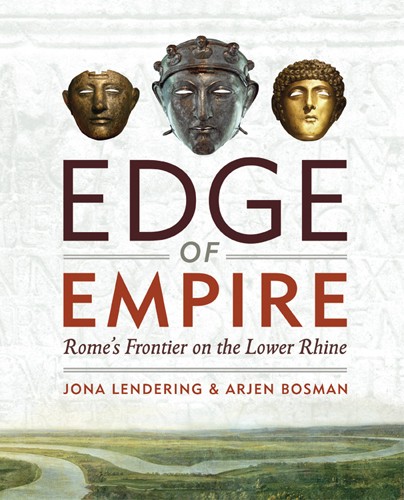 Last week I finished reading 'Edge of Empire' by Jona Lendering and Arjen Bosman, with a stress on the authors as any simple search on the net with this title in it may well cause you to end up in 'a galaxy far far away', which would be a shame as I think this read would be for more entertaining and have a much more coherent plot.

I thought I would take the weekend to mull over my thoughts about this book as I really enjoyed it but it wasn't one that I read in an instant cover to cover, but rather one I kept coming back to over about six weeks of reading, interspersed with an historical novel.

On reflection I think that was because this book covers a vast tract of time looking at the establishment, running and final collapse of the Roman provinces along the lower Rhine frontier with Germania, some of which I had a huge interest in and other periods less so, but found myself drawn to understand the whole picture rather than bits of it.


On reflection I wish I had read this book and had it with me on my visit to this part of the world last summer, as my understanding of what is known about the Roman period on the Rhine is so much clearer and comprehensive having read it.

So what is this book all about?
Well 'Edge of Empire' is a history of the Roman occupation of the Low Countries that takes in the Belgian, Dutch and German lands bordering the Lower Rhine and combines the writings of the ancient sources with the archaeological record to weave a picture of this part of the Roman world by comparing and contrasting the two sources.

In addition the analysis illustrates the Roman preconceptions about these lands and the people that lived there, at, to them, the very edge of the known world and shows how their ideas have impacted our modern day ideas about this period and how modern science is helping us to disentangle those preconceptions from the actual reality of that world.

As highlighted in the introduction our knowledge of the area from archaeology is growing dramatically with the number of excavations carried out in the Dutch speaking part of Belgium increasing sevenfold between the years 2005 and 2011 and with the addition of techniques that look at ancient pollen and other markers about climate and coastal erosion, a key factor in this part of Europe, we get a really interesting picture of the land that would have been recognisable to the people back then.

In addition the book does a really good job at helping to 'debunk' a lot of the stuff about the Rhine and the Roman border established on it, as a clear line between separate peoples, started by Julius Caesar in his book on the Gallic Wars. The peoples either side of the Rhine were closely connected in language and traditions before the Romans arrived. The Rhine as a border is very much a Roman creation and not one that applied until their arrival.

The book draws out the Roman constructs that considered the further away a people or land was from Rome and so called civilisation the more barbarous its land and peoples were, which caused Roman writers to make up their lack of personal knowledge about these areas or peoples by throwing in these constructs which obviously included ideas about the ferocity of the tribes on the edges of the known world that was also covered in mountains. If you have ever been to the Low Countries you will know how it got the name and mountains are a bit of a rarity!


I particularly enjoyed the chapters covering the period before and after the 'Varian disaster', the Batavian Revolt and 'Year of the Four Emperors' 69 AD, and the comparison of what is alluded to in Roman texts compared with the archaeology.

I remember seeing several finds relating to these really interesting periods of upheaval and military drama at Xanten and Haltern, that I covered in my posts from last year and these were referred to in the book.

To give an example of how these events were portrayed in the book I thought I would highlight one in particular that grabbed my imagination for a possible wargame scenario.


The Frisian Revolt of 28 AD is covered on page 73 with a report of the events taken from Tacitus' Annals where  he describes the events that led up to and caused the revolt and the action between the tribe and Roman garrison that followed.

In the text he describes how the governor of Germania Inferior called up detachments from the legions in Germania Superior, together with auxiliaries and cavalry and conveyed them along the Rhine.

The text describes how the local Roman forces were bottled up in a fortress near the coast called Flevum and put under siege until forced to break off and attempt to thwart the arrival of the relief forces.

This culminated in a hard fought river crossing battle over several fords. It would appear that nine hundred Romans got detached from this relief column and were surrounded and killed with a further four hundred cut off and taking refuge on a local 'estate' where by common consent they killed each other rather than face capture.

In the end the Roman Fifth Legion cohorts were rushed forward to relieve the auxiliaries and managed to beat off and break the Frisian army.


The narrative then goes on to look at what the archaeology reveals from this time, given that where exactly all the action described is is not known precisely, but that the fort of Flevum mentioned in the text has been linked to the Roman naval base at the mouth of the Rhine on the North Sea at Velsen.

The garrison is thought to have been composed of up to a thousand soldiers and evidence reveals that the fort was stormed at around 28 AD with five hundred and twenty lead sling-bullets allowing a  very precise reconstruction of the battle that took place there and that the Frisians came very close to winning it.

In a relatively short battle that saw three separate attacks on different sectors and with the Germans breaching the wall, determined by the plotted finds of sling bullets.

In addition the Roman bullets were of three distinct types with two purpose designed shapes made with the luxury of time whilst a third was a simple design made when time was pressing and that a desperate battle was at hand.

This third type was crude and made in a great hurry by simply pressing the thumb into the ground and pouring molten lead into the hole to create the bullet.

The first two attacks appear to have been driven off using the prepared bullets, and the attacks would appear to have been made at the same time, however the third attack caused a breach and the quantity of bullets together with them being of the cruder type suggests that the Germans held on long enough before being finally repulsed, to cause the Romans to run out of conventional shot.

The fort was evacuated after the battle and to make sure it would not be reoccupied by the Frisians the ground was poisoned with dead bodies thrown into the well and a horse cadaver deposited in another water supply.

The evacuation was done in some haste and definitely by the defenders as one of the Roman soldiers remains recovered from the well still had his dagger with its richly decorated scabbard, something no Frisian warrior would have simply thrown down a well.


The fort at Velsen cannot be definitely linked to Tacitus' description and the connection will remain uncertain until other evidence comes to light but the dating and the evidence revealed, like that at Kalkriese is very compelling.

So, the book consists of one-hundred and ninety seven pages of content listed;


The book is completed with an extensive list of literature sources on the subject together with a list of 192 references to sources quoted and these lists are supported with a comprehensive subject index.

A really useful set of appendices are included, particularly Appendix 3 that lays out a ten day route plan for visiting the key sites and museum collections in the region, something I intend using as there is still a lot of stuff I still plan to see.

Now one thing that makes this book really stand out for me are the copious illustrations and photographs of the archaeology brought to life by fantastic artwork by Graham Sumner, Jose Antonio Germain and Jonny Shumate.

How often have I and others complained about a lack of maps or maps that add anything to the text, you know  "'if I had a pound for every time I have complained......."! Well fear not with this beautiful book as we have not only maps but maps in glorious colour, and complimentary to the text.

The book was originally published in Dutch and needed to be translated into English allowing for a reading population not being so familiar with the area and to include updated archaeological information to complete the story.

Marie Smit-Ryan and others are to be congratulated for a masterful translation of the Dutch original work and the Latin sources used throughout it.

Finally I think it is worth mentioning that Jasper Oorthuys and his team at Kawansaray Publishers do great work publishing historical tomes and magazines that underpins the historical side of the hobby and this is the second great book I have had from them.

If you are the slightest bit interested in the Roman Frontier along the Lower Rhine then this is a must read for you and you might also like to read the posts I wrote about my visit to the area last year. Both are much more interesting than 'Star Wars' trust me.

My copy of this book was direct from Kawansaray on an offer at the time
https://www.karwansaraypublishers.com/book-pr/books-shop/edge-of-empire.html