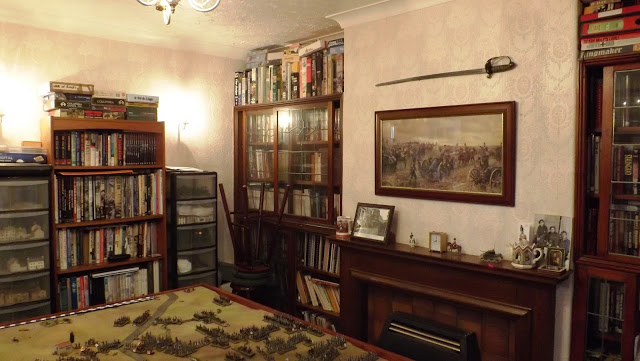 This year at JJ's Wargames has been one very much of transition and reorganising around the new projects. Those projects being the Romano-Dacians and Dark Ages collections both centred on a new scale for me namely 28mm.

When I think about a collection, I am one of those wargamers who looks to build everything I might need to create a game and that means two or more opposing armies and the necessary terrain.

For the last fifteen years or so all my collections have been modelled on 15/18mm which meant that much of the terrain for them was interchangeable, but the move to 28mm has required a need to create new terrain to compliment the figure ranges and that in turn creates a need for new storage arrangements to cater for the new figures and terrain items. 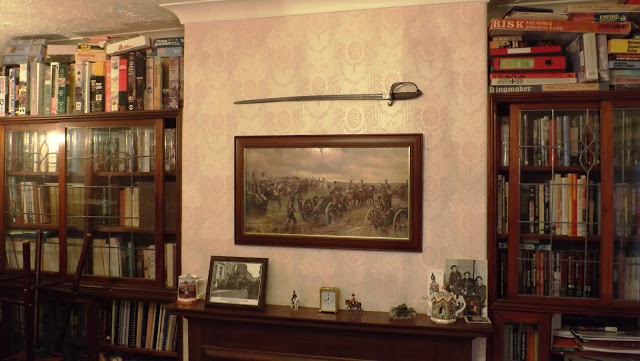 The top two pictures were taken three years ago and show the book cases on one side of my room pretty much as they were with board games filling the space on top to the ceiling.

The space underneath my table and the plastic stack units sufficed for keeping my terrain stored with the bulk of my figures either in steel tool cases or in the display cabinets on the other wall.

This arrangement was not going to work with the current plans and so extra space was going to have to be found to accommodate the changes ideally before the bulk of those changes had occurred.

So waiting for our very hot summer to pass, Carolyn and I made plans to radically clear our loft space to allow me more space to keep my books, board-games and additional terrain and figures thus leaving the play room space to keep those collections and terrain items likely to be needed more often than not. 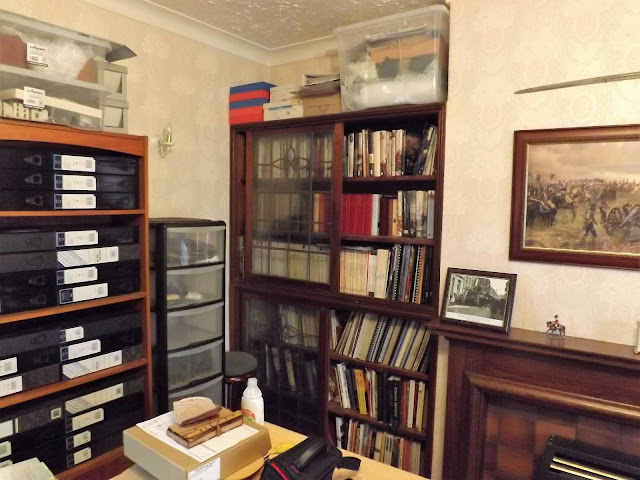 So phase one of this reorganisation which started two weeks ago is done, with the loft cleared, new storage boxes acquired and the library sorted and reassigned new space.

This in turn has allowed former book space to be given over to figure storage, with the filling boxes seen above used for very handy 15mm figure storage once adapted with some magnetic sheeting to stop the collection sliding around in them. 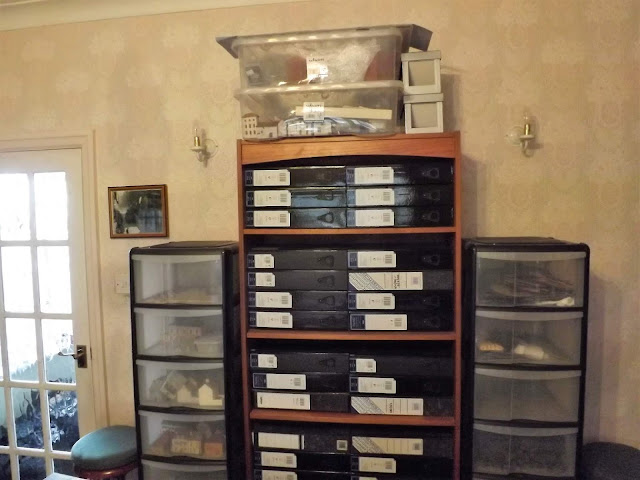 The majority of the WWII Normandy collection and the Napoleonics will in time move into this form of storage. 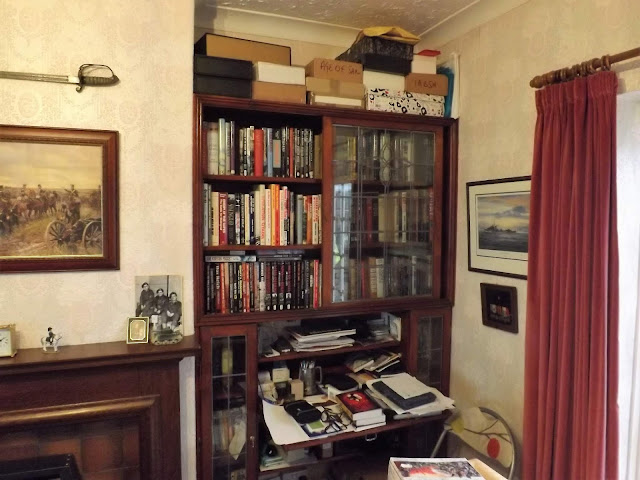 This is only phase one as phase two leading into Xmas will see the books over my desk relocated 'loftwards' to allow other books and rules to grab the space along with other figures, with my desk getting a much needed clear-out to allow for a better working space to do my game creating from.

A lot of rule sets and their required bits and pieces are now boxed up and above my desk top book-shelf which has again freed up space elsewhere.

In addition I still have some sorting to do under the table which will create bag-loads of terrain storage, much needed when delving into 28mm, and I can see some shelving going into the loft to go with my comfy chair up there where I can indulge in a bit of reading now and then. 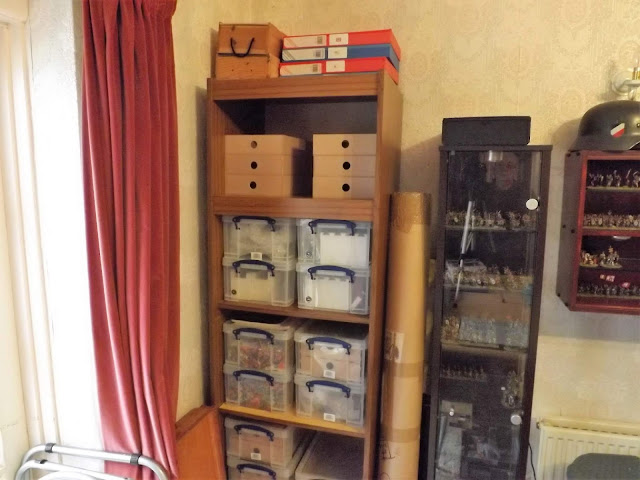 On the other wall the tall bookcase seen above has had its books relocated to allow for RUB boxes to be stored which can hold figures and terrain items. with things like various table mats stored in the space between it and the display cabinets which are now holding the new 28mm stuff. 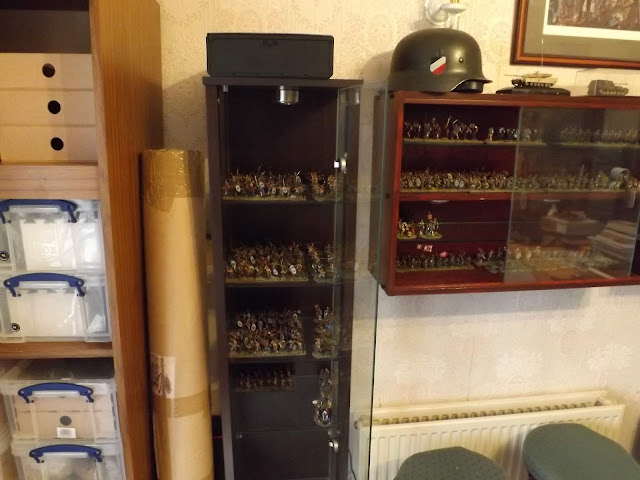 The really exciting aspect for me is seeing all that freed up cabinet space just screaming out to have new figures painted up and put in them. 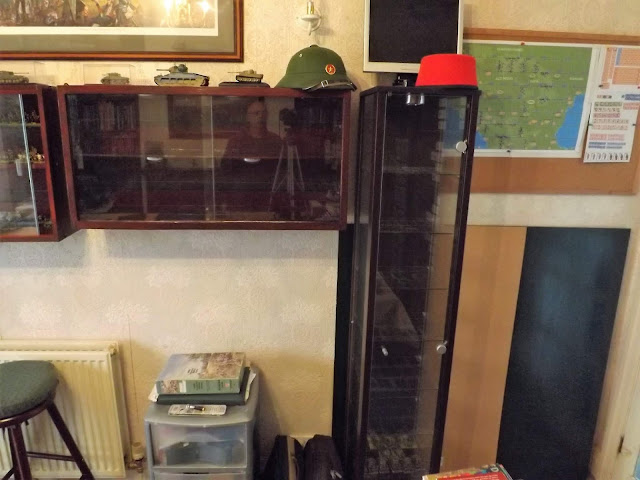 So the Romano-Dacians are luxuriating in their new home and able to gaze out on the table that will be the stage for many an upcoming adventure. 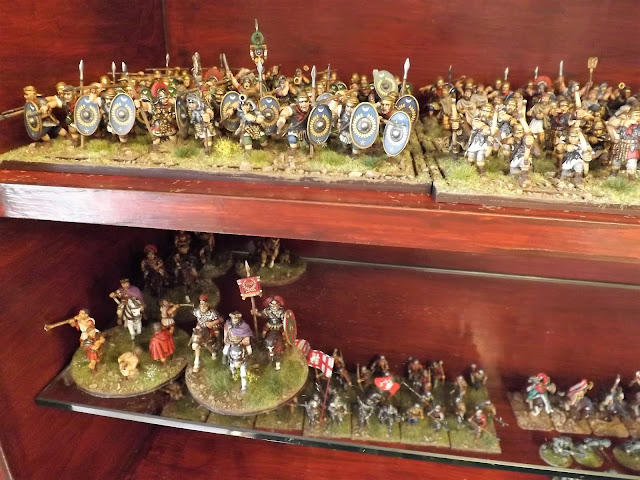 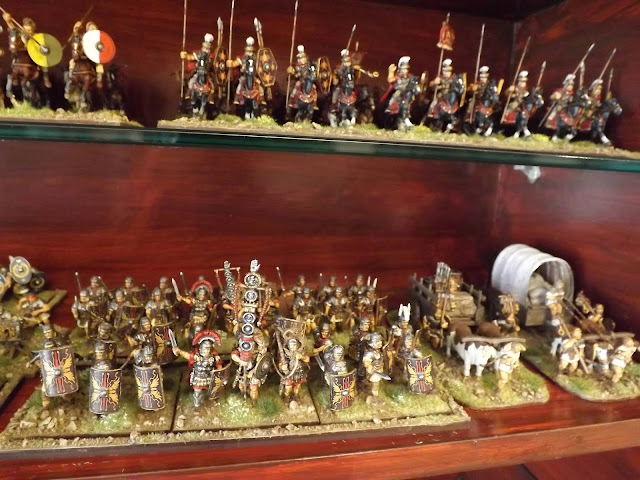 Finally the last of the WWII Normandy models were boxed up with Micheal Wittmann and his Tiger boys parked up behind some rather nervous US Shermans and Stuarts. 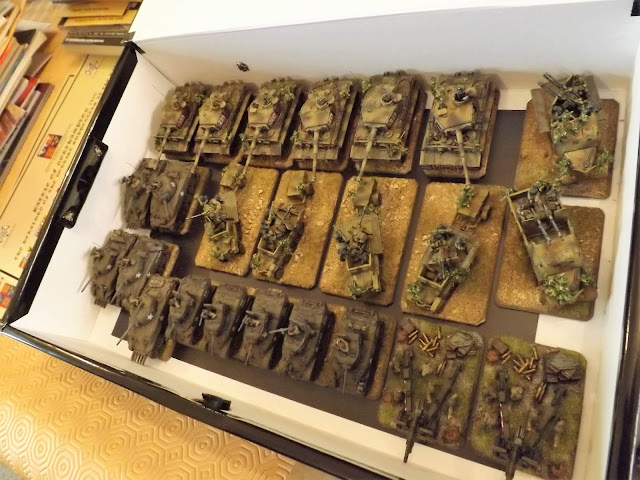 So the planning and preparation is almost complete that will allow lots more room to do lots more games in lots more periods in the years to come and a job I was eager to complete prior to adding too many more units to the collection.

I write this post sat in a very nice city-centre apartment in Antwerp, Belgium on 'All Saints Day', which to us non-Catholics is November 1st and is Carolyn's birthday, so will be spending the day enjoying the delights of Antwerp whilst also looking forward to attending Crisis 2018 on Saturday. 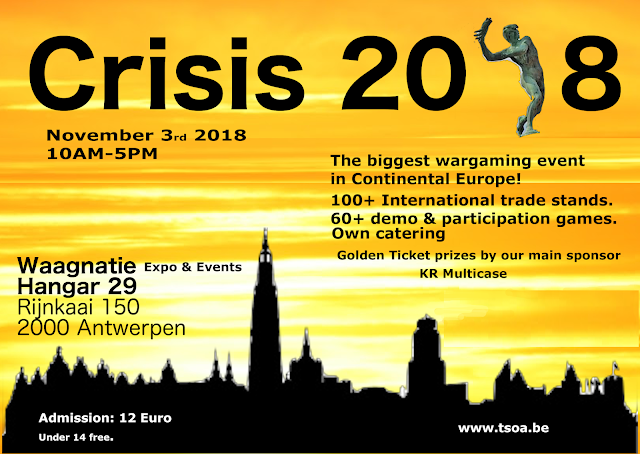 Crisis has fast become a major show in Europe to rank alongside Salute in London and I am really excited about visiting it and getting to see a lot of the European gaming and trading circuit that will makes a refreshing change from the UK one I am very familiar with.

As always I intend to put up a post covering my trip so lots to look forward to.
Posted by carojon at 02:30