Carrying on where I left off looking at some of the much needed changes to my wargaming room to help accommodate the new collections building or to be built, I thought it might be interesting to share my process of setting the 'infrastructure' up around my collections.

I tend to approach building collections as an all in one in which I am looking to put together enough figures from both participating factions to enable me to create games that capture that particular theatre, era etc.

Alongside the collection building for me automatically adds further considerations about building a terrain collection that allows for the creation of as many different stage sets to be created for my metal/plastic actors to perform on.


Once I have the basic plan in mind and more importantly on paper which will list the units to be built, the commanders needed and some scenario ideas which naturally generates the terrain requirements it is then all about the look I want the game/s to create.

I am very much a visual person in terms of my acquiring and understanding information, so give me a picture of what it is I am supposed to get my head around and I am well on the learning curve, so I tend to work with mock ups and pictures of other collections to work out in my own mind what I like and don't like.

My 28mm collection has forced some major considerations versus all my recent previous collections in that the larger scale up from 15/18mm demands a different approach to constructing my tables and the terrain needed to do that.

Gilder/Perry style terrain boards can look very nice but I tend towards the cloth approach to gaming because it works from a storage and transport perspective, being less bulky and easy to store and move, so the cloth as used in my 18mm games remains but I decided that the larger scale might benefit from a newer more defined look, hence the newly ironed Tiny Wargames 9 x 5 ft mat you see in the pictures.


Putting some of my terrain pieces out on the mat together with some figures helps me visualise the table made up ready to play and for my 28mm games the decision to use more scatter terrain and on table small hill features rather than using the under mat hills as in the 18mm games, although I have that as an option if required.

This decision reflects that the table space in the larger scale recreates a much smaller ground space than otherwise and thus the terrain needs to reflect that as well.

My flexi roads will also need to be pinned to reduce that annoying curling at the edges and hopefully with more use and a bit of judicious ironing will reduce in time.

So with my new mat in place on the table it was time to cover the table back up and look at my other mat options which are the Battle of Britain mat to compliment that collection of models built around the Lardies 'Bag the Hun' WWII air rules.


I ordered this cloth up earlier in the year with an aerial view of the Dorset coast at Lulworth Cove and the tank training grounds at Bovington which sees this coastal area the least affected by modern road layouts that really don't look right when trying to recreate the British landscape of 1940.

I have left this mat off the table so I can take it to club at some time and will probably just lay it on the table over the cloths when playing at home.

As well as this I also have my new sea cloth which I didn't picture rolled out but is ready for when I feel the urge to roll out some naval games to satisfy a craving to get back to sea occasionally. 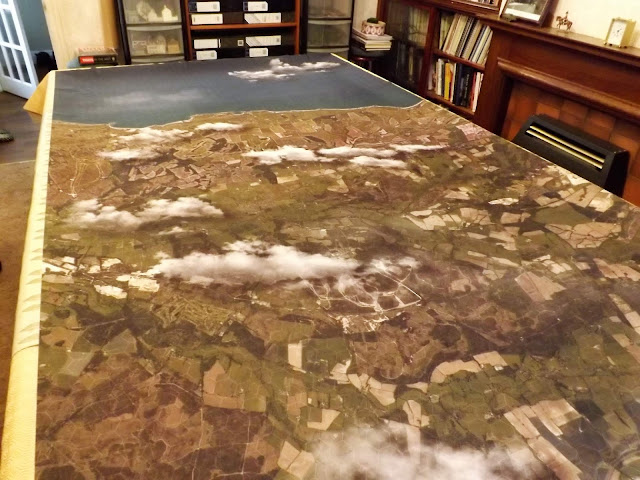 So the next stage is to release the creative impulse and to start adding to the terrain that will start to populate my tables with the first important job of building trees and lots of them. 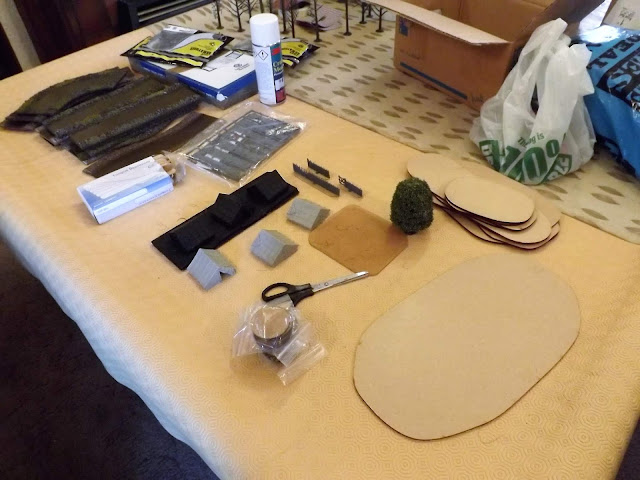 I have decided to add to what I have in larger trees with armatures from Woodland Scenics over which I will be using rubberised horsehair as a substructure.

Some I intend to leave as free standing and others will be added in groups to scatter terrain bases to help create the ancient woodland common to the Rhine/Danube frontier.

If you like messing about with terrain and want to brush up on your skills then I would recommend checking out The Terrain Tutor where you can get lots of guidance and inspiration for these kind of projects.

So the next month or so will now see efforts and time shifted into my terrain collection before returning to bring the armies up to strength. 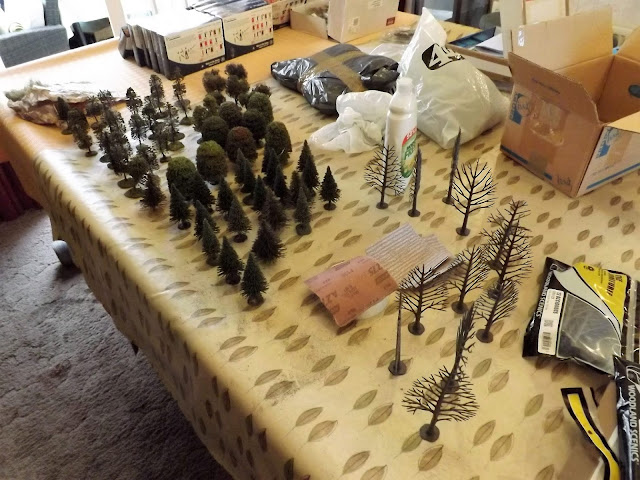 On the way up to Warfare last weekend the chaps and I had a very interesting conversation about terrain and for some of us it is more of a chore than a pleasure, with many preferring to buy ready made 'off the peg' options which I can entirely understand.

For myself, I have always viewed terrain building as another facet of the hobby to be mastered and preferably enjoyed, which I find I do.

I guess for me, I see the figure collection and the terrain to go with it as one collection and an opportunity to express myself in both, so it was rather nice for me to put the paint brush down for a while to enjoy the delights of ripping of clumps of horsehair and setting up my tree substructure. 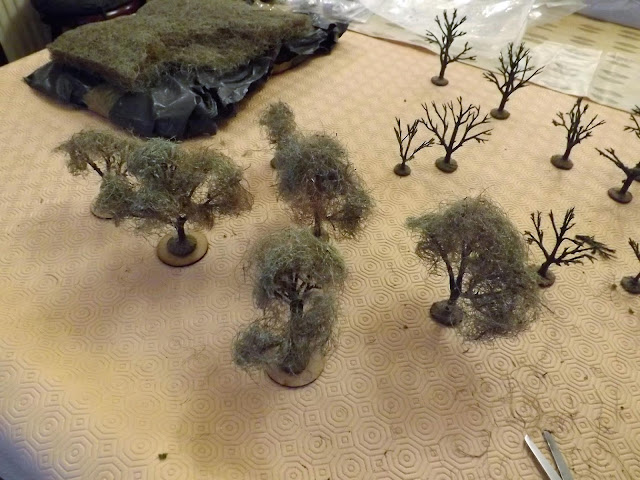 So far half my trees have a new substructure of horsehair and about a third of them have had their new foliage put on which was a very satisfying job but I ran out out of leaf scatter so will need a another trip into town and my local model shop to resupply. 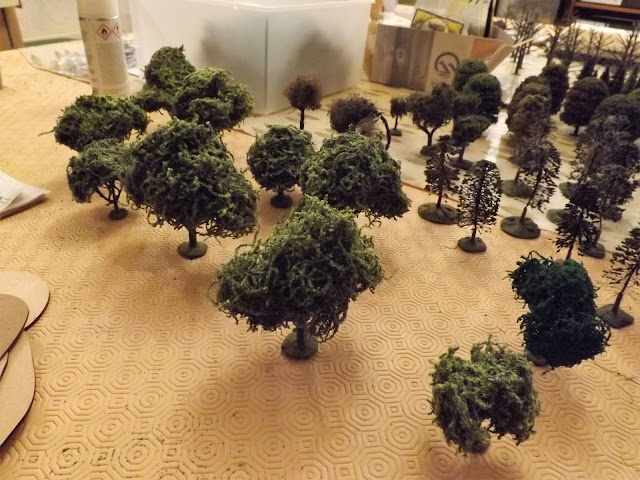 I was trying out some different colour combinations which look to give a nice green tone to my summer trees. 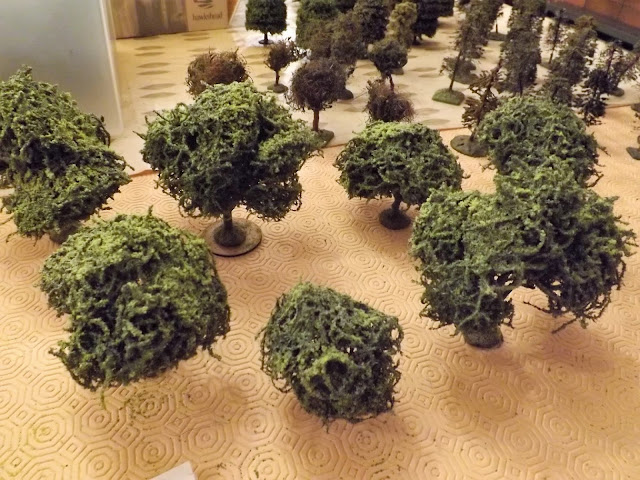 Finally, isn't serendipity a wonderful experience, because whilst setting up the room to accommodate my terrain building kit I came across a few books which I got for my birthday back in August and put in a box and completely forgot I had them only to rediscover them today.

Not only that but my new book covering the Cuidad Rodrigo sieges by Tim Saunders turned up today from Pen and Sword and whilst down in town picking up modelling supplies I noticed a bargain book '1 Group Bomber Command' on sale for just £6.99 so that got added to the library and my supply of reading for the next few months. 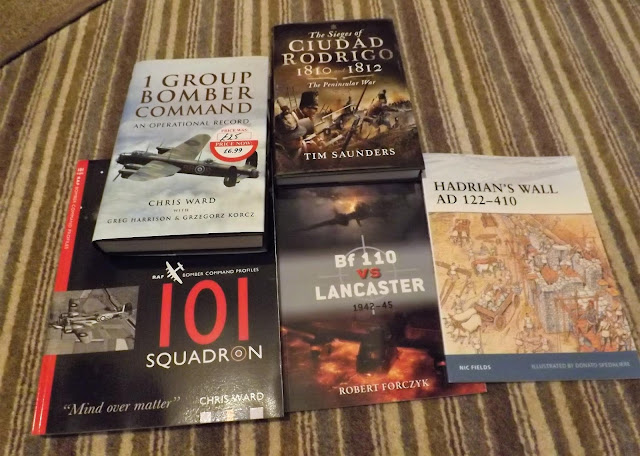 Other stuff to come on JJ's:
Us 7th Cavalry are done in preparation for the Gus Murchie Memorial game at DWG. More reports on recent travels and excursions including the Three Castles trip with Mr Steve, a visit to the home of the Somerset Light Infantry and Somerset Yeomanry in the historical county town of Taunton and a report on a very interesting talk I attended looking at the role of Churchill's 'stay behind' forces in East Devon in preparation for a possible German invasion.
Posted by carojon at 09:33