Chain of Command - The Devil is in the Detail 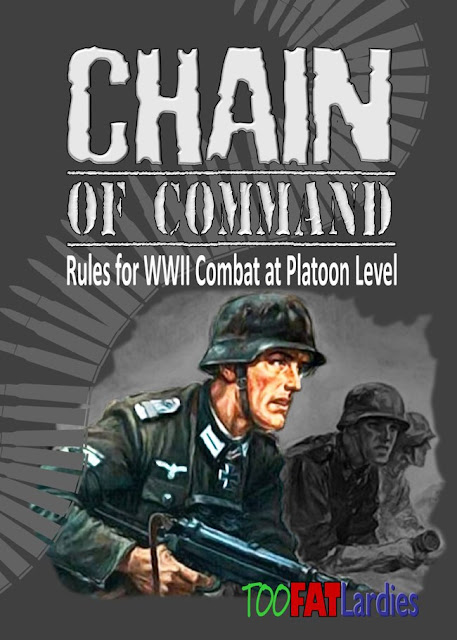 As an 'Historical Wargamer', I have always been a fan of the Too Fat Lardies and their ethos of 'playing the period, not the rules' which very much ties into my own way of thinking about wargaming and the history I am attempting to get a little closer to understanding, whilst having some fun in the process.

In addition Rich Clarke and Nick Skinner have produced rule sets that very much chime with historical themes I am very interested in, most notably World War II and the Late European Campaigns in France, The Low Countries and Germany in particular.

My wargaming habits tend to operate on themes, as I very much enjoy immersing myself thoroughly for a few years in a given period to gain that understanding I mentioned and hence I have not tended to be the fashionable 'butterfly' type of wargamer constantly flitting between projects and forever distracted by the latest 'new thing' to hit the wargames press.

Thus prior to starting this blog way back in 2012 I had spent a good few years playing a lot of WWII in 15mm using mainly Battlefront 'Flames of War' figures and models but of course using the Lardies, 'I Aint Been Shot Mum' for which my rather large collection of Normandy companies, British, German and American are built around, not to mention quite a bit of terrain. 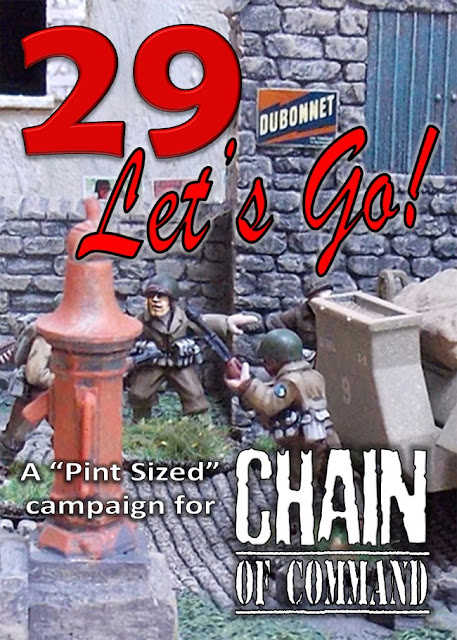 The blog's start date coincided with a shift of themes as I yearned to return to another 'true love' Peninsular War Napoleonics and the result of that recent reacquaintance is documented here on JJ's. That and the most recent theme shift, where I have not only moved my focus to the Roman Principate, but also into a totally different scale, 28mm, with all the terrain building implications that has required.

Unfortunately, during this theme shifting, a very significant, award winning, set of WWII rules was published by the Lardies looking at Platoon level combat, 'Chain of Command' that clashed horribly with my focused work on gaining a clear understanding of modelling British Reverse Slope tactics.

Thus although I purchased the rules and all the 'gubbins' that went with them on day one, and have played them, sort of, since, I have not really had the focus to sit down and explore what was immediately obvious to me; that Chain of Command are a very clever well thought though set of rules that reward a closer study to really appreciate the detail and insights they can offer when looking at this level of WWII combat.


Fortunately I was not alone in having this glaring gap in my wargaming education and other regular wargame friends with a similar interest also felt the need to get better acquainted with this set of rules; not to mention having the offer from another of our regular circuit, Jason, who was closely involved in their development and who knows them from cover to cover, offering to run one of the campaigns at his place to enable that closer look at how they play, one on one and with the context of thinking about the next game and the consequences of the choices made in the one being played.

Game Two Bloody US Victory
So with Steve M and I taking the US command and Ian taking command of the Germans we arranged to meet over at Jason's on a Tuesday night for the next few weeks to play through the Chain of Command Campaign supplement '29 Lets Go' that recreates the 29th US Division fight to clear the coast road from Omaha beach to Isigny and eventually Carentan thus linking the two bridgeheads and US forces operating from Utah beach. 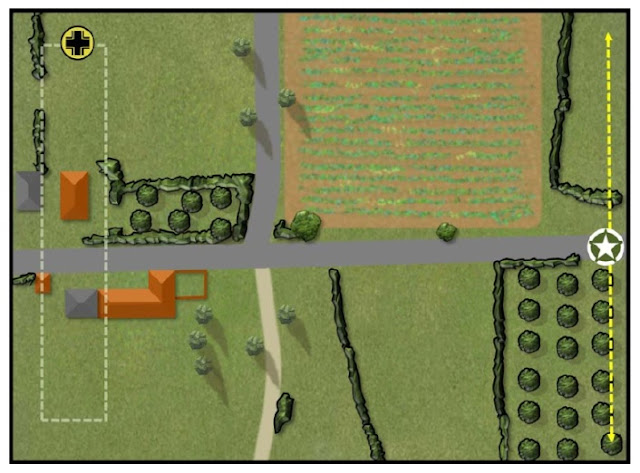 We played the first game last week which, as I suspected, was a steep learning curve for all of us as we grappled with the mechanics and consequences of the decisions we made, that certainly changed our approach to this the second game in the campaign ladder; after the US forces successfully broke through at Cambe and progressed to Arthenay where we were tasked with tackling a German delaying force hastily assembled to prevent any further US advance. 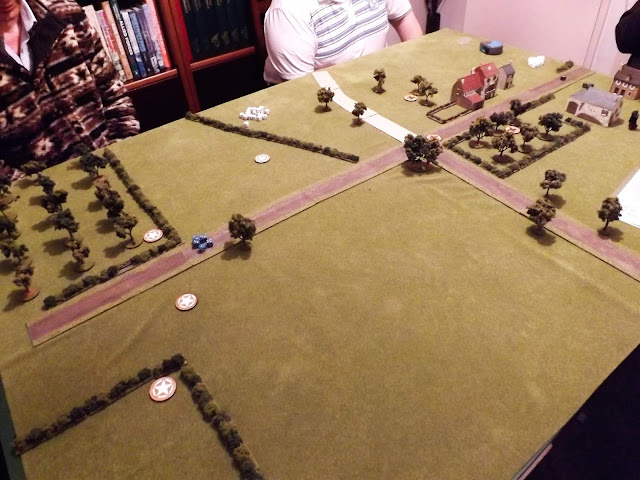 The map below gives a view of the US plan to establish three mutually supporting Jump Off Points (JOP's) and this pre-game set up and planning phase is for me and I think a lot of other regular CoC players a fascinating part of the whole game and can really make or break a successful outcome in how you stake out the ground before the bullets start to fly. 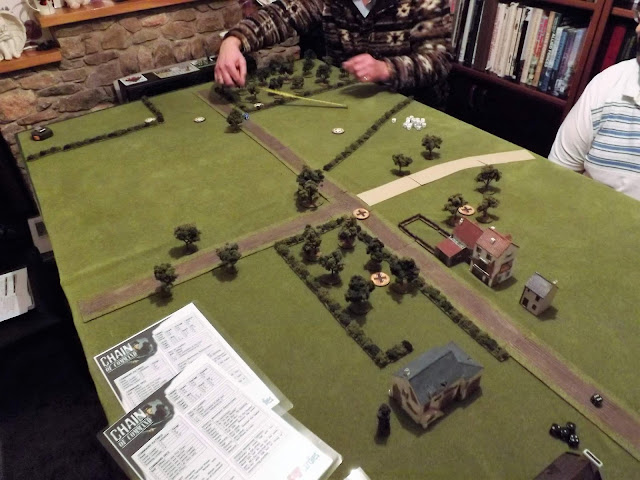 Following the first game we were all a little more cagey in our deployment on to table, perhaps too much so from a US perspective, and both sides were looking to try out new support options, an aspect it seems that every regular CoC player has a strong opinion about as to what they always look to take.


In addition to support their are the force specific tactical options to consider and so in this second game the US squads were throwing forward their recce teams to do the 'Find' bit of  'Find, Fix, Flank and Finish'. 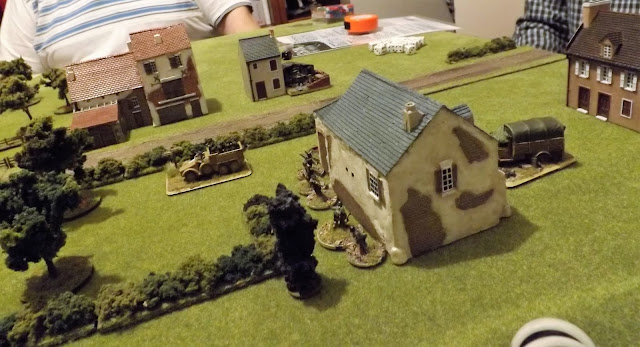 With all the extra thinking going on in this second game, we didn't complete the action in one night and with 'yours truly' not able to make the second part of this scenario it was left to Steve to grab what turned out to be a very bloody US win with both US tanks knocked out and over half the platoon dead or wounded, but as they say a win is a win and a bloody win is better than a bloody loss. 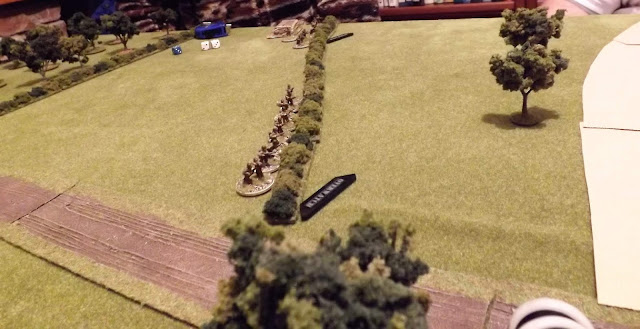 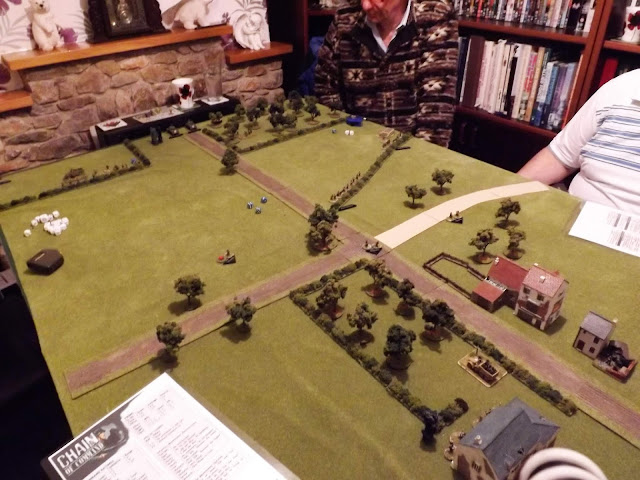 Game Three - Bloody Draw
Yesterday we played game three that sees US forces forced to divert attention to German forces harassing their left flank advance along the Carentan road from a village just off it, St Germain du Pert. 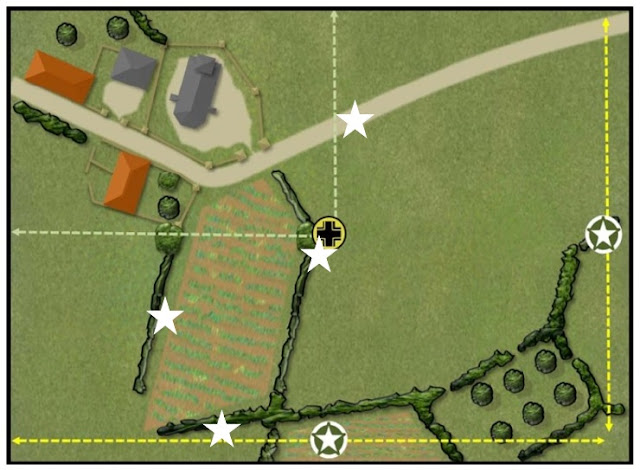 The map above was the US planned JOPs which sees the US able to flank attack this German held hamlet securely ensconced in thick stoned Norman buildings. 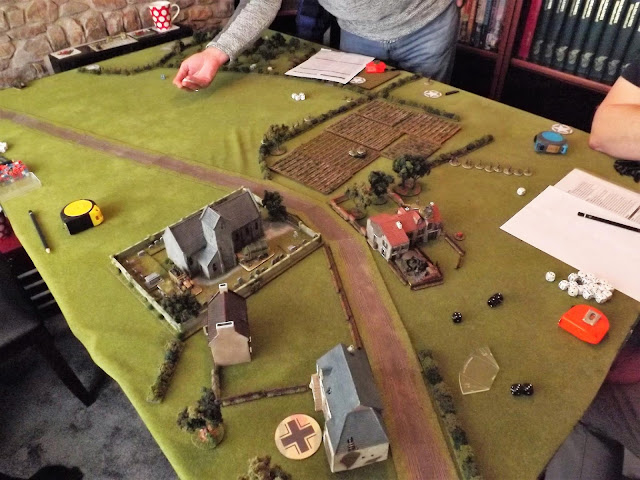 The game didn't really go to either sides plan with both of us rolling poorly on the 'Force Morale' table and thus giving ourselves little breathing space to absorb casualties and other force upsetting issues.

Both sides employed armour and an early US flanking attack was repulsed with heavy losses but leaving the Germans badly depleted from the bombardment delivered by the US tanks supporting the infantry attack.


The Germans tried to break the US force by taking out a tank with Panzerschreck fire from the church, but at long range the Sherman survived the fire and quickly drove off the team, killing one member and delivering a couple of shock to boot.


With both forces teetering on breaking with just one morale point left the US force tried to force the initiative by charging the churchyard wall to finish off a battered and pinned German section that had been brassed up by the US tanks only to see the German section dispatched but loosing a US squad leader that tipped them into a force morale break at the same time.


So a bloody draw that sees us replaying this scenario next week hoping to learn the lessons learnt from this game.


I have to say that CoC is living up to all our expectations and as a group we are all enjoying progressing up the learning curve and with aspects of this rule set making it very obvious why they have become the go-to set for a lot of WWII wargamers.

The other aspect that really adds to the games we are playing is that we can finish them in a reasonable amount of time and with all the continuity that a linked campaign like this has to offer.

Needless to say I now have some plastic WWII figures on order so I can build some CoC specific platoons in 15mm on single bases rather than use my IABSM ones.

The good news is that I already have the tanks and heavy weapons not to mention a lot of NW Europe terrain and am planning to add this great game to my regular repertoire.
Posted by carojon at 04:06