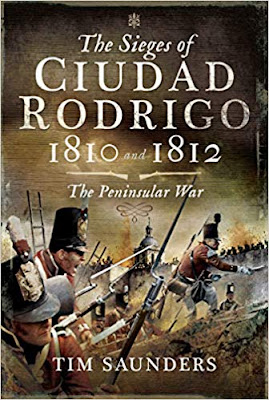 Last month I completed my planned education in the key Tolkienien works by finishing the six books that make up 'The Lord of the Rings', having started with 'The Silmarillion' in September last year, then 'The Hobbit' in December.

Following that little detour I then fed my mind with a bit of Imperial Roman fiction and read Simon Scarrow's, 'The Eagles and the Wolves' covering Macro and Cato's adventures during the Invasion of Britain in 44 AD.

This perhaps explains my recent lack of Book Reviews on more serious historical reading since my last review of 'Four Days in September' and Jason R Abdale's excellent look at the Battle of the Teutoburg Forest in February.

However I have had two books that I have very much been wanting to get read before setting off on a long planned for trip to Spain and Portugal next month; taking three weeks to drive across the Peninsula taking in the battlefields of Sir John Moore and the Duke of Wellington.

Those books being the one featured in this review, published last year by Pen & Sword to be followed by 'The Key to Lisbon' by Kenton White this year and covering the third French invasion of Portugal in 1810-11 from Helion Books.

So following a rather lengthy preamble, what were my thoughts about 'The Sieges of Cuidad Rodrigo 1810 -1812'?

I have to say I really enjoyed Tim Saunders new book, having read several of his other titles as part of my studious collecting of the Battleground Europe series of WWII battlefield tour guide books that he has written, also through Pen & Sword.

The border between Portugal and Spain was for centuries a fiercely contested demarcation line between two very distinctive countries, with the smaller Portugal always aware of defending their hard fought for independence from their much larger neighbour.

As the two countries played their part in the periods of European conflict that epitomised the typical 'Sport of Kings' that saw European royal dynasties vying with each other through marriage and war to control ever greater empires; the border saw the erection of major fortified centres designed to control the key crossing points between them.

Cuidad Rodrigo was one of those fortified centres, controlling the most northern of the three invasion routes into Portugal, which in turn took the invader towards the Portuguese capital of Lisbon.

In the Peninsular War, Portugal was invaded three times by the French, with General Junot entering via the central route along the Tagus Valley in 1808, Marshal Soult taking the more problematic route through mountains from Corunna in the north only getting as far as Oporto in 1809, and the third and final attempt under Marshal Massena in 1810, via the northern route and Cuidad Rodrigo.

Saunders, in his first two chapters, covers the lead up to Massena's invasion, taking the reader through this earlier period of the war and explaining the route selected by Napoleon and Massena very much in terms of the reality that successive French invasions had stripped the approach routes of potential supplies for Massena's invading French army, designed to live off the land.

However Napoleon was alert to the fact that even using this route, the French army would still need to take along its own supply column, given the guerrilla war being waged by Spanish partisans and the paucity of supplies in Spain at the best of times, but also take the time to secure its rear areas and create the required depots to supply the large force envisioned for the invasion of 1810.

Thus Massena's orders from the Emperor made it quite clear that before entering Portugal, Cuidad Rodrigo had to be taken from its Spanish garrison.

Saunders then looks at the preparations in some detail for that invasion and the gathering of troops and supplies along a route stretching from Bayonne on the norther Franco-Spanish border via Vittoria, Burgos, Vallodolid and Salamanca (see the map above).

In addition the route would also be used to bring forward the French siege train of fifty pieces of heavy artillery, together with all the ammunition and transport, gathered earlier in the year at Burgos and Vallodolid.

As the French preparations gathered pace Wellington's sources of intelligence kept the British general informed of French progress and troop movements and Saunders outlines how he was aware of the dozen large bread ovens constructed at Salamanca and the changes in French operating procedures that produced enough food supplies in May 1810 'to feed Ney's VI Corps for six weeks and and the cavalry, artillery and their mounts for a month'.

In addition other places were secured such as Astorga on the northern flank of the French assembly area, by General Junot's 12,000 strong VIII Corps.

Chapter three concludes with the French preparations well established and Massena bringing together his three corps for the campaign, namely Junot's VIII Corps, Ney's VI Corps and Reyniers II Corps, and with Ney moving into position to secure and blockade the city at the end of May 1810 as the other two corps moved to the north and south to observe any Anglo-Spanish moves from the Portuguese border and the south.

The next six chapters then take the reader through, in good detail, what I found to be the most interesting part of the book, namely the war of the frontier that characterised the period from Ney's blockade being established to the fall of the city

This four month period would see the eventual fall of Cuidad Rodrigo to the French siege operations on the 10th July 1810 and the final clash between the Light Division and Junot's troops of observation at Villar de Peurco the day after, which preempted the Light Division finally being driven back behind the River Coa as Ney lead the invasion into Portugal.

Within these six chapters lies a wealth of scenarios that the Peninsular War enthusiast can only dream off with the little battles between Junot's and Craufurd's men as both attempted to dominate the ground between the two armies as the French focused their attention on the Spanish city; with the actions at Barba del Peurco, the clashes between General Herrasti's Spanish garrison and Ney's besiegers, together with multiple skirmishes along the River Azaba, culminating in the final clashes at Villar de Peurco and the Coa Bridge.

All the actions mentioned are accompanied with maps and on the ground pictures taken by the author giving a great sense of what each battle area looks like and the terrain that the combatants fought over.

With the conclusion of the French siege and capture of Cuidad Rodrigo, Chapter nine takes a whistle-stop tour of the events that followed that charactersised the period of French expulsion from Portugal for the last time and the shift in strategic initiative that moved in favour of Wellington and his Anglo-Portuguese army, neatly setting up the situation that lead to the Anglo-Portuguese siege and recapturing of the city in January 1812.

Again Saunders covers in good detail the preparations leading up to this campaign, with the probing actions around the city at Espeja and El Bodon as Wellington sought to size up the new man in command of the ironically named Army of Portugal, Marshall Marmont, who replaced Massena in 1811 after his failed invasion.

I have several other accounts of the British siege of Cuidad Rodrigo and am much more familiar with it than the French operation, but Saunders account is a great addition; taking great care and attention to detail over four chapters, in covering the preparations, siege operations and eventual storming of the city and the aftermath with copious maps and illustrations together with his own photographs of the city today.

As you would expect from a member of the Guild of Battlefield Guides, Appendix I gives a comprehensive tour itinerary which as well as describing what can be seen today also lists the walking maps required together with grid references and GPS coordinates, plus details of where to park and what to take when heading out into the wilds.

The Sieges of Cuidad Rodrigo 1810 and 1812 by Tim Saunders is 273 pages and consists of the following content:

This is definitely one book that does not need more maps! I counted some forty-six maps and aerial photos mixed with a very generous amount of pictures and illustrations to accompany the text.

I am very pleased to have this book and to have read it prior to my expedition next month and this is definitely a must have for the Peninsular War enthusiast.

The cover price for this hardback is £25 from Pen & Sword, which is where I got my copy and they also have it on for £15 for the Kindle version, however you can pick up hardback copies now from Amazon for around £12 to £16 which is a steal.

Lots more to come on JJ's with a post on the final, very bloody, battle that concluded our '29 Let's Go' Chain of Command campaign and I am off to Partizan 2019 this weekend with the chaps from the DWG for our annual beano to Newark and Lincoln.
Posted by carojon at 00:04