Our Chain of Command campaign continued this week with a return to table 4, The Radar Station at Cardonville, following the US victory on table 2 last week and the German troops deciding to pull back from the Arthenay position astride the main road to Osmanville.

Following the US victory in our first game at Cambe on table one, we have charted the games played so far which can be followed in the links below.

As the titles in the links suggest the US forces have have been given a hard fight with two crushing German victories in games five and six which caused the US command team to take a very close look at the tactics we were employing and to initiate some key changes to our attack methods.

Game seven and the aggressive use of the US armour changed the balance back to the attack with the US finding a way to overcome the German mortars in defence by advancing in the barrage and enabling US Jump of Positions (JOPs) to be moved up prior to a US infantry assault at close quarters.

The German defenders chose to pull back before the US infantry were able to close and so our battle has moved back to the Cardonville Radar Station (table 4) which held bloody memories for both Steve and I (See link to game five above) as we recalled how our infantry squads were decimated on the slopes of the nearby hill, unable to close down two German JOPs and without any support from HMS Glasgow which retired from our battle early. 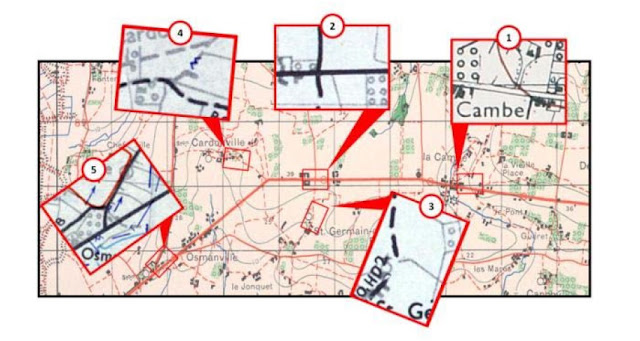 The scenario is pretty much straight out of the rule book with an attack and defend scenario requiring the US to either break the German defenders or force them to retire from the position.

The map below illustrates the position and the start lines of the two forces prior to the Patrol Phase.

Because this was the second time US forces had fought over this ground, HMS Glasgow would not be on call in our support and with the German defenders having plenty of time to prepare the position we expected and found they had mined two positions close to the US start line, with the road bend and large house next to it heavily mined and booby-trapped. 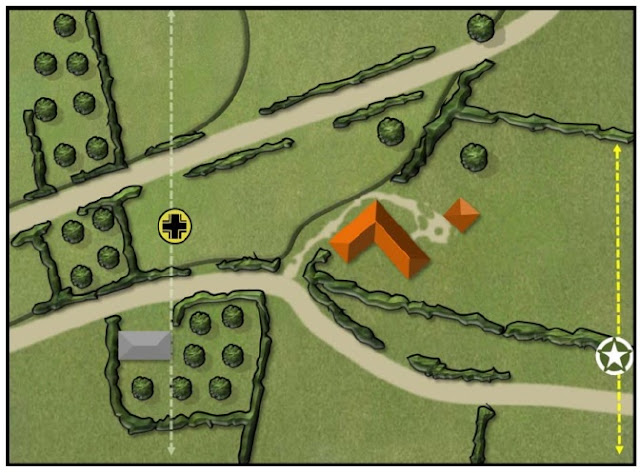 The table below shows the position of the game after the US infantry had advanced from the JOP (top left of picture) onto the nearest German JOP in the small orchard near the house (top right of picture).

The US infantry have advanced behind a US mortar barrage that plastered the two closest German JOPs allowing them to take the JOP without a German soldier being on the table, and with the JOP captured US forces have just ended the turn using a CoC dice.

Whilst the attack was being pressed US tanks can be seen positioned at the back along the road (top left of picture) to give covering fire should the mortar barrage have ended prematurely.

In addition the position of the US FOO is indicated in the grey house with a senior US commander who has controlled the FOO and his barrage as well as directing an engineer team to clear one of the German minefields in preparation for moving up to clear the next one. 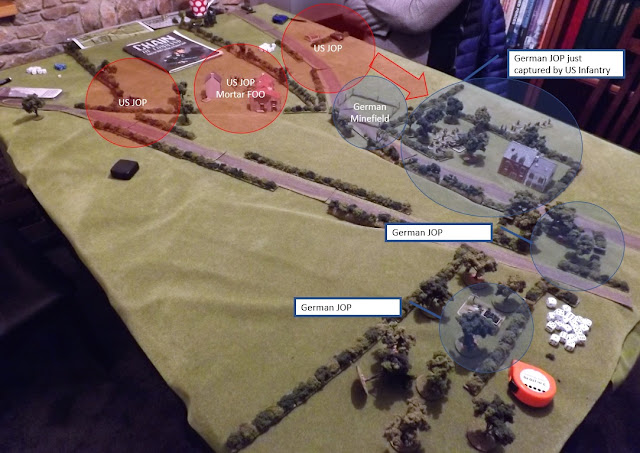 As the barrage ended to secure the German JOP with the ending of the turn, German troops immediately emerged from the next nearest JOP further up the road and, with US infantry moving among the orchard securing the position, immediately opened up on them with withering machinegun, small arms and HE from a dug in 7.5cm infantry gun.


The German fire was massive in dice rolled causing just two casualties, both riflemen, but seven shock, and putting the whole US attack plan in the balance with only one German force morale point removed along with their lost JOP.

Some relief came in the form of fire from one of the supporting Shermans using HE and managing to inflict two shock on the German defenders, but the firefight was not in favour of the US infantry who could only go tactical and keep their heads down and hope to keep the shock under control with support from the second US commander who moved up to rally the troops.


The game had reached a critical point and with a second German section deployed next to the first with a plan to destroy the nearest US infantry squad in the orchard, radio link was re-established with the 81mm mortars and a satisfying marker round exploded ominously amid the German position.

Not only that but the US force had rolled a double six which allowed the fire for effect order to be issued immediately and the German position disappeared among smoke and exploding bombs.


The mortar fire was not initially particularly effective in causing casualties and only a modicum of shock, but the fact that the German position was now pinned and masked allowed the US infantry to remove its shock and get into position to launch its own close attack with tanks moving up in support once the barrage lifted.


However persistence started to pay off and successive mortar attacks with the Germans unable to end the turn and lift the barrage started to wear down the defenders with accruing shock and casualties, making their chances of resisting any US attack when the barrage lifted more and more unlikely.


With their position becoming more and more untenable with each successive turn, Ian decided to order a German pull out and the US troops moved onto the position to mop up and secure it in the wake of the next advance.


This was the first time our game plan worked as envisaged and saw the US force finally get their various units working together as an all arms combat team that took control of the battle early on as soon as the US armour and FOO deployed on turn one, seeing the barrage dropped on the German position within three turns and the German JOP captured within six.

In addition this attack differed very much from the previous one in that it was lead by the infantry, not the tanks and combined with the US mortar support gave a very different attack but no less effective, with even the engineers contributing with a cleared minefield.

Ian played the German position as well as he could given the circumstances, as we have all learnt to maximise our effectiveness from the experience we have gained since game one.

Each and every game has been very different even when played over the same table and Chain of Command has created lots of decision points for all players throughout. All you can do is hope to improve you chances of a favourable outcome by stringing periods of play together that shifts the game irrevocably in your troops favour.

Ian, Steve and myself have experienced the rollercoaster of emotions those game shifts create spanning the spectrum from utter frustration when the wheels of a plan fall off in a period of play to the satisfaction of seeing a plan move through the gears and take the game away from the enemy. 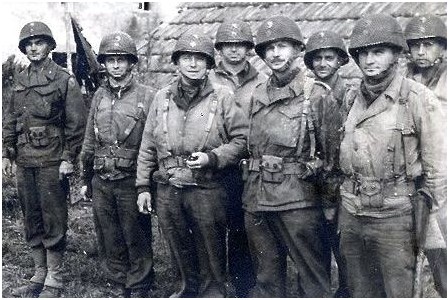 Anyway from a US perspective Colonel Goode, our boss is 'almost happy', with a US victory costing the loss of just two US riflemen and an advance enabled to the German HQ at Osmanville and a potential to breakthrough to Isigny and Carentan beyond.

Thank you to Jason, Ian and Steve for a very entertaining evening of play and off to Osmanville we go, next week, for our next game in our campaign.
Posted by carojon at 04:21