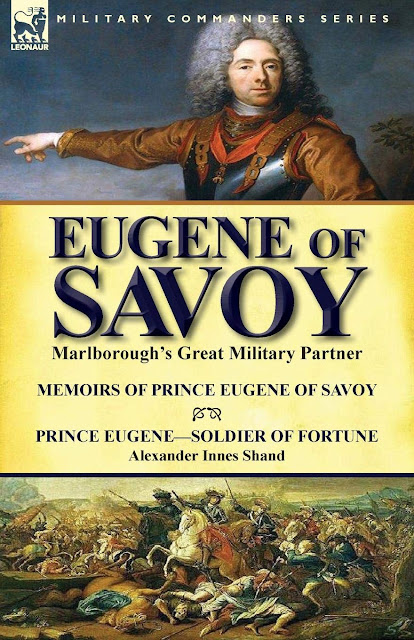 The pile of books waiting for me to review has now reached the stage that I have to give a health and safety warning to anyone who visits me in case it should topple. I had also given some thought about doing another reader’s choice poll to prioritise the reviews but in all good faith I cannot guarantee that I will fulfil the results. The writing muse just hasn’t come back yet.

For those who thought the subject of this book is about one of Napoleon's marshals then you are wrong, in this country Prince Eugene is probably remembered as a general who helped out the Duke of Marlbourgh at Blenheim and Oudernarde but there is far more to Eugene than that, far, far more, he was certainly one of the greatest generals of his time and is easily in the top half of all time.


The book itself is quite short and is in A5 size, it is split into two sections, the first being Eugene’s memoirs as written by him in later life and only slightly edited in 1809, it is written in the style of the times and can be a little tricky in places. The second section in much clearer prose is a summery of his life written at the start of the 20thC using these same memoirs with brief clarifications where necessary and expanding on or including key details which were missing from the edited original.

Eugene was actually French being born in Paris in 1663 and his family background was a mix of Bourbon and Savoy Royalty, his mother was exiled by Louis XIV and Eugene was denied getting any military appointments so he left France and transferred his loyalty permanently to the Austrians.

He first sees action during the last Turkish Siege of Vienna in 1683, he was up in the hills with the relieving army as a nobleman volunteer and took part in the battle that broke the siege. He continued to fight throughout the rest of this war and was given more and more responsibility, by the end of 1685, still only 22 years old, he was made a Major-General. I guess it helps having royal blood but it was clear that he was obviously a talented military leader. At the 2nd Battle of Mohacs his cavalry brigade made a significant contribution and he was promoted again, this time to Lieutenant General.

At the start of the Nine Years War (1688-1697) Eugene, given his connections to Savoy was posted to the Austrian army in Italy, The current Duke of Savoy was trying to play both sides given that he was in the middle of the French and the Austrians so Eugene was sent to keep him onside. Frustrated by the inefficiency of the Imperial commanders and the Savoyards eventually changing sides, Eugene considered leaving Austrian service but the Emperor instead promoted him to Field Marshal.

At the end of the war he was given command of the army fighting the Turks which was his first independent command and in 1697 he decisively defeated them at the Battle of Zenta, a battle I have always been interested in gaming.

The War of the Spanish Succession was next and Eugene much to my surprise spent most of his time back in Northern Italy fighting a series of battles I hadn’t previously heard about and has re-piqued my interest in maybe doing a Marlburian army but in a completely different theatre from the more popular one, the Austrians could also be used to re-fight Zenta and as I found out as I read on, two more battles against the Turks.

He briefly pops back up north to fight at Blenheim, back to Italy for three more battles and then gets sent to join Marlborough again in time for Oudenarde and Malplaquet, unfortunately like most memoirs they do not cover these famous battles in much detail but what does come through is his admiration for Marlborough.


There are no actual chapters instead the memoirs are sub-divided by year; initially these are relatively short but as he rises up the ranks and the wars get bigger then so do his yearly entries.

After Marlborough’s recall and the general desire for peace amongst the allies, Eugene was left holding the baby; with dwindling resources and heavily outnumbered by the French he did well to hold what he could especially when the Treaty of Utrecht left Austria fighting on by themselves until 1714 when Eugene negotiated the Treaty of Rastatt with Marshal Villars.


Eugene wasn’t finished, the Austro –Turkish war 1716-1718 saw him once again leading the Austrian armies to two more stunning victories at Peterwardein and Belgrade which saw that city permanently regained. Eugene considered the battle of Belgrade his finest victory, besieging a city with 30,000 Turks inside and a huge relief army of around 150,000 entrenched on the hills above, his small force of 40,000 suffering from both dysentery and fever stormed the Turkish positions routing them completely whereupon Belgrade surrendered.

According to his memoirs with no more wars to fight he retired to his palace to devote time to his garden, his library and playing cards in the evening with friends.


In 1733 Austria unwisely got involved in the Polish succession crises which saw them once again at odds with France, Eugene now in his 70’s took the field for the last time but Austria was seriously skint and he could do little more than defend the Rhine and delay the French armies with whatever forces could be scrapped together. For once he avoided battle and held on long enough for a reasonable peace to be negotiated.

He died in his bed shortly after.

His memoirs do have a number of interesting points scattered throughout, during his last campaign he remarked on how he envied the French commander the Duke of Berwick who had just had his head taken off by a cannonball and that the German Prince who was amongst a number of young Royals attached to the army to learn from the old master “showed infinite promise” (later to be Frederick the Great).

The two parts of the book complement each other well as the second section is a little easier to follow being more of an essay written in a modern style, as previously mentioned above it also contains numerous bits that were omitted from the first part.

Eugene was usually where the fighting was thickest and was wounded many times, at the siege of Lille he was shot below the eye which he mentions but in the second part it is expanded:

“everyone thought me dead and so did I ,they found a dung cart and a carried me back.”

Sometimes an editor will omit parts that they deem unsuitable, having the two sections shows its benefits.

Eugene was for some time not fluent in German, enough to command and for the day to day necessaries but not enough for dealing with Imperial Court matters, French was unacceptable so he spoke to the Emperor in Italian, strange little things like this don’t get mentioned usually.

Prince Eugene is a fascinating person who, if I have added up Wikipedia correctly fought in seventeen battles and countless sieges, this book whilst light on the type of hard detail that wargamers desire still gives you plenty of topics to go and search for later on. It’s an interesting read about an interesting person. (and yes, it is who the heavy cruiser was named after).

This has been a Mr Steve presentation.

Next up, Devon Wargames Group goes on tour to Wargames Foundry.
Posted by carojon at 01:41