This weekend I was at the club involved in our annual Lardy gathering Clotted Lard which for myself, started on Friday night as I and other club members assembled at our venue to arrange tables for the next day before retiring to the hotel-pub in Exeter to join our guests staying over for the show for a swift pint or two.
The next day started at 08.00 setting up the other room as game organisers arrived and set up their tables ready for a welcome address together with some housekeeping announcements and the usual group pictures, before I set off touring the two games rooms to sit and join each game in turn to try and capture the look of the action for our show report; together with a video clip below which I think shows what a Lardy event and especially Clotted Lard feels like when you're in the room and everyone's deeply involved in their game and having fun.
For a full report of the show together with pictures of all the games then just follow the link to the club blog:
Devon Wargames Group - Clotted Lard 2021
Having taken the morning session to gather my pictures for the show report I was doing a 'hot table' as I think my American readers would say, typical of a US Convention, as I swapped with Andy Crow who ran the Bag the Hun game in the morning to set up my Kiss Me Hardy, Leeward Line scenario with the Warlord collection of 1:700th ships. 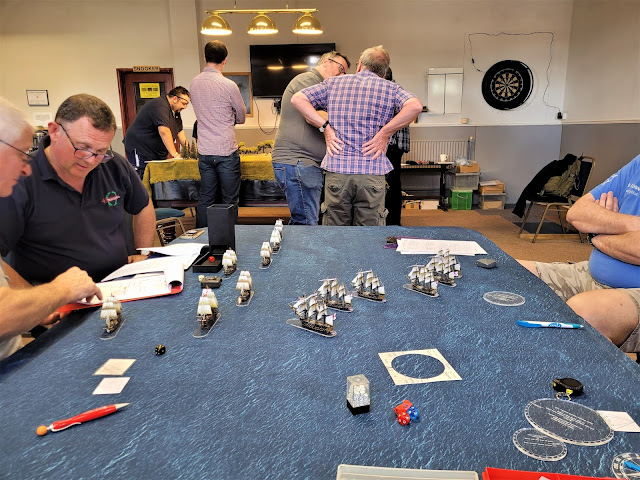 The warm-up game I ran in July at the club really paid dividends as I was able to take the time in between to really tweak the scenario and make sure the player aids and record sheets worked much better on the day which allowed the game to really get going and we played through to a conclusion.
One aspect I wanted to include was a measure of a clearer winner in this microcosm of a much larger battle and so settled on the idea of basing the criteria as if the two formations were in fact very separate squadrons from the larger fleet action that was going on around them.
Thus the Combined Fleet squadron, composed of elements from the Rear Squadron and Squadron of Observation were deemed as one under the control of Spanish Admiral Alava leading in the Santisima Trinidad, and likewise the British under Collingwood.
With these formations delineated, relegating French Rear-Admiral Magon as Alava's second in command on his flagship, the 74-gun Algeciras, I allocated a Fleet Preservation Value (FPV) to each ship, with each third rate valued at 2 points per ship and a first rate or flagship valued at 3 points.
This idea of Fleet Preservation, that is that a fleet, like a land army, doesn't fight on to the last man or ship, like wargamers, but will attempt to break off when losses cause a break of confidence.
This idea then of Fleet Preservation is not mine and I know I harvested it from another discussion forum for use at a later time, so apologies for not remembering who to credit for this simple but effective idea.
The total Fleet Preservation Point Value of each force then equated to 13 points for the British and 16 points for the Combined Fleet, which allowing for a loss of 25% for the Franco-Spanish and 50% for the British equated to 4 points for the former and 6.5 points for the latter.
Thus the Combined Fleet Squadron under Alava would be likely defeated with the loss of more than two of its 74 gunners or one of the flagships and a single third rate, with loss defined as being caused to strike, sink, burn up and explode or captured through boarding and with a dismasted vessel counting one point less in the total, i.e. a flagship dismasted equating to two rather than three points off the total.
This simple calculation would determine when a particular force was likely broken, to the extent that a test would normally be taken at that point in the game with the roll of a d6 adding the quality rating of the commanding admiral, +1 for Collingwood and 0 for Alava and Magon, should the latter find himself in command, needing 5 or 6 for the squadron to stay in the fight and with failure seeing the Combined Fleet for example, attempting to disengage and move to the leeward table edge, only shooting back if fired upon, and obviously, likely captured at the end of the scenario if prevented from escape by British ships on their leeward side.
In addition, with the role of admirals influencing the morale of their respective squadrons, I wanted the potential for their loss through death or wounding to have an effect, so included Nick Skinner's 2005 Trafalgar Scenario,  'Death of Nelson' rule to allow for all the admirals involved to test if their respective flagship suffered 'High Officer Casualties' as a special damage hit.
As our game progressed the Combined Fleet got the majority of their ships to deliver extreme and long range broadsides at the British rigging in the approach phase with the Royal Sovereign for example reduced from a base speed of 12cm to 8cm plus 2d6 cm for having a quarter wind, because of damage recieved in her rigging from the Santisima Trinidad on the approach.
However as anticipated the delivery of stern and bow rakes by those British ships that managed to break into the Allied line added to by other British ships pouring in close range broadsides reduced two Spanish and one French third rate to floating wrecks with fires breaking out on two of them.
Inevitably the two Spaniards struck and the British went for the killer blow by grappling the battered Fougeueux, and boarding her, winning the first round of melee to capture the Frenchman's upper-deck, whilst pouring in a point-blank bow chaser shot, which missed, as she attempted to get the French ship to test for a strike.
The final twist of the game came as we prepared to head off to the pub as the Fougeueux, then managed to come storming back with what remained of her crew of 'Elite' Sans Culottes to push the Royal Sovereigns back to their own bulwarks and thus still fighting when we ended the game.
However it seemed likely that another strike test caused by the next round of firing would see her strike eventually, breaching the Combined Fleet's four point threshold and a likely failed FPV test and so I called the game in favour of Collingwood's column.
If you want to give this scenario a go with the adaptions I have added then just follow the link below for the scenario briefing together with the orders of battle and ship record sheets.
Posted by carojon at 02:11