All at Sea - Let's Build a Sloop, Part Three

In this the third and final post in the series 'Lets Build a Sloop' I'm showcasing the last three models built, representing likely vessels for post 1795 French, Spanish and Batavian Dutch and looking at the plan that underlies my small-ship collection.
If you missed the previous two posts, they are linked below with part one illustrating the build process with a link to various video tutorials to help with various aspects from the construction of the hull to rigging the model once its built; and part two looking at the British, early French and American options.
All at Sea - Let's Build a Sloop, Part One
All at Sea - Let's Build a Sloop, Part Two
In my post looking at the Batavian Dutch frigate and brig (see link below) I mentioned my reference to three key actions covered in 'The Naval History of Great Britain 1793-1815' by William James, from which Messrs C.A. Sapherson and J.R. Lenton pulled together 100 Small-scale Actions covering the years 1793-1801, first published in 1986.
I think this little book is a bit of a gem as far as anyone wanting a quick reference to some interesting small actions, mostly one versus one but usually no more than five or six vessels involved. It does have the odd inaccuracy here and there but nothing drastic that can't be crossed-checked with James' original work.
Once the build of my heavy ship collection was done, designed to facilitate the very large battles of the era, with a core collection of British, French and Spanish ships of the line, hopefully Dutch to follow when Warlord release their next set of models, I needed to plan a similar collection of smaller types from frigates to gunboats and the Sapherson-Lenton booklet seemed a good foundation to work with, supplementing as it does, the collection of frigates I had built to use in my larger fleet/squadron games.
The other neat thing about using this booklet, is that anytime I need to throw a quick scenario together for a game or two at club, is that this will be a handy resource and, once I've finished tweaking To Covet Glory and Narrow Seas, I will have a simple scenario structure with generic victory conditions and manoeuvre rules able to be set up for anytime-anywhere use.

Sapherson and Lenton is not fully comprehensive, only covering the French Revolutionary War period and so I will use it as a foundation build plan, no doubt adding to the collection to allow for later actions fought in the Napoleonic period such as the classic frigate action at Lisa in 1811 with Neapolitan frigates; but the plan you see above forms a solid core to start things off with, including as it does Indiamen, Poleacres and Xebecs.
In addition I have identified the key actions from the early part of the war included in these lists which help explain my recent focus on building a small collection of French carrying 1793 colours and ensigns to operate alongside my Batavian Dutch.
Finally I thought I should highlight a couple of tips for anyone wanting to have a go at building these models which I tried out in this build and proved very successful. 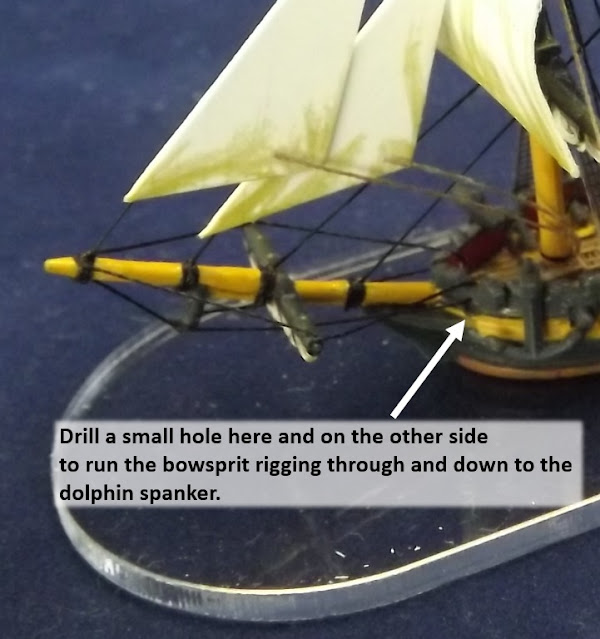 First, is a tip on rigging the bowsprit by placing to discreet holes in the bow bulwark either side of the bowsprit to allow the thread that is linked to either end of the bowsprit yard to be drawn through as an anchoring point before taking it to the dolphin spanker and tying it off with super glue.
The second tip concerned sorting out the acetate shrouds and ratlines as supplied with the brig kit.

The first thing to consider is that this is a three-masted ship that will require and extra set of shrouds, so extras are easily obtained from Warlord Games.
My solution for rigging the new mainmast was to take the larger of the brig shrouds originally designed for the mizzenmast on the brig, and, by carefully cutting an extended point to the acetate, making a longer shroud for the new mainmast able to be tucked in neatly below its fighting top as illustrated in the picture above.
With a careful application of Vajello black-grey the extra length of shroud lines are lost to the eye among the other standing rigging and works well.
Finally two sets of brig foremast shrouds work perfectly on the mizzen and foremasts of the new sloop, also as seen above on my Spanish variant.

First up we have my late war French corvette loosely modelled on the 24-gun Privateer corvette Bayonnaise, launched in September 1793 and later purchased for service in the French navy in March 1794. 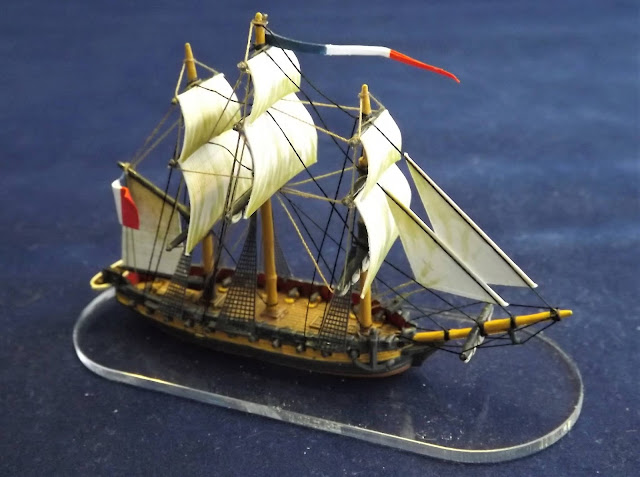 In 1795 her hull was coppered in Brest and she was renamed Breme, which was not a popular change and was roundly ignored by the French marine. 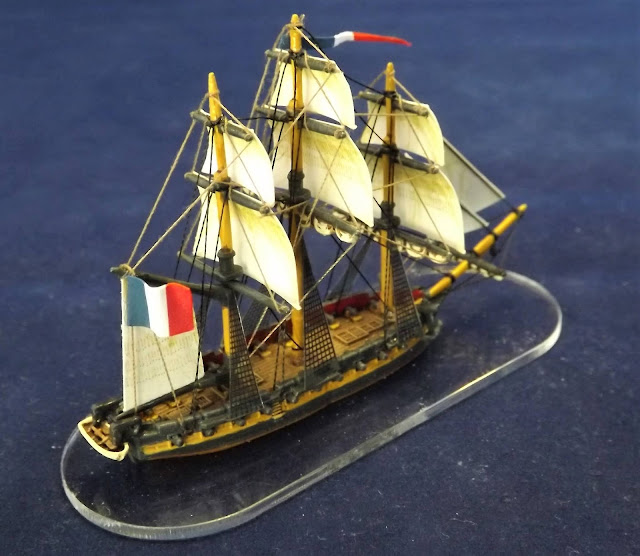 At 0700 on the 14th December 1798, she had a famous encounter with the British 32-gun frigate Ambuscade off Bordeaux, when the latter mistook her for the British 32-gun frigate Stag, with which Captain Henry Jenkins of Ambuscade was supposed to be rendezvousing with prior to them blockading the Gironde Estuary.
The two ships closed and only then did they recognise each other as enemy vessels with the Bayonnaise immediately turning away to run as Ambuscade commenced to chase, with the ships coming into action at 12.00 and running foul of each other at 1300.
The Bayonnaise became fast across the Ambuscade's stern and kept the British quarterdeck clear with heavy musketry from the extra thirty French soldiers additional to her strong 120-man crew, allowing the Frenchman to board her adversary over her bowsprit, seeing the Ambuscade surrender with 10 dead, 36 wounded including all her deck officers.
Bayonnaise suffered 30 dead and 30 men wounded including her captain, her first lieutenant and Captain Nicolas Aime commanding the soldiers from the Regiment d'Alsace. 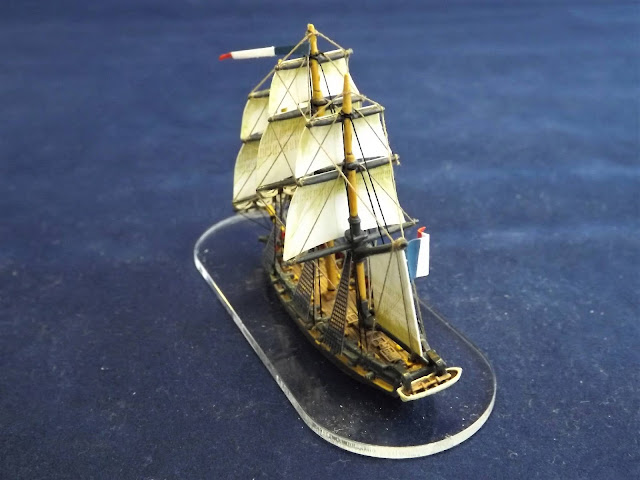 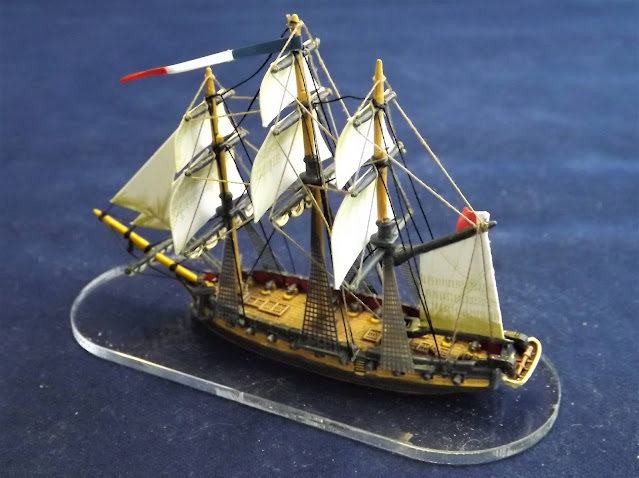 The French authorities had a propaganda coup with the capture, such an event being a relatively rare one and with the smaller French vessel able to overcome her larger adversary.
Captain Jenkins would be later acquitted at court-martial of allowing his ship to be boarded by a stronger party when he had an advantage of gunnery and manoeuvre.
The action between Ambuscade and Bayonnaise is just one of the thirteen actions included in Sapherson's and Lenton's '100 Small Actions', covering the years 1793 to 1801, that features a French corvette and thus this addition ensures my ability to adequately represent the French forces in those scenarios. 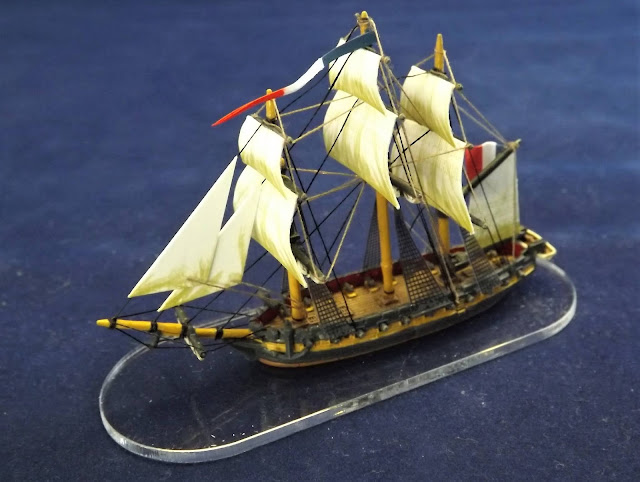 As you will see from the planning sheet, my Spanish corvette, set to join the other one I built earlier, is a diversion, or should I say an addition to the collection, the plan allowing the flexibility to include them, as Spain was a major combatant in the war at sea of the period and did indeed field these smaller types. 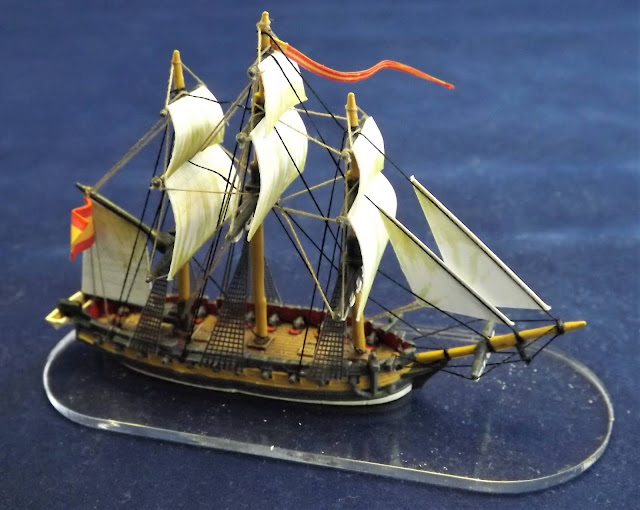 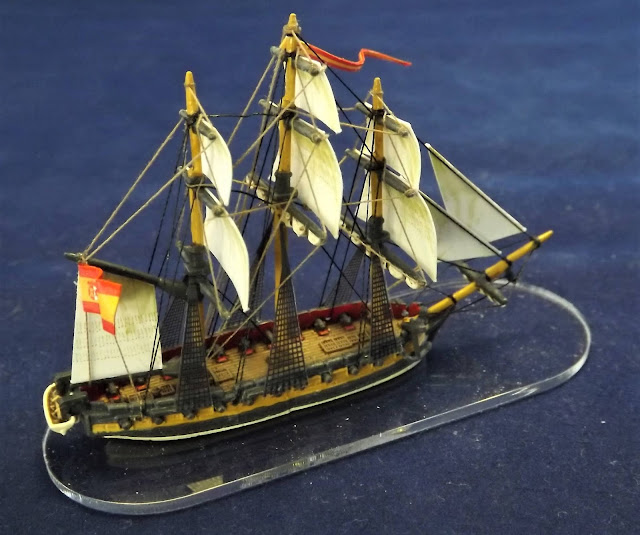 These Spanish light cruisers were particularly active in the Caribbean and mid-Atlantic as privateers operating out of the Rio-de-Plata against British slavers on the West African routes, offering lots of what-if set ups in those arenas. 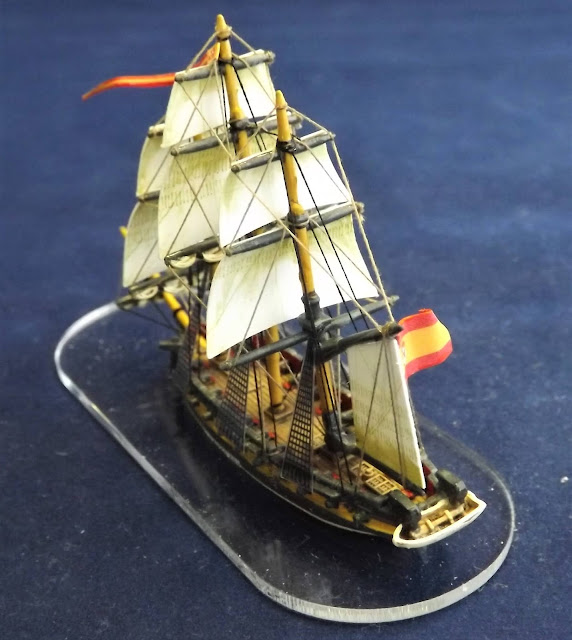 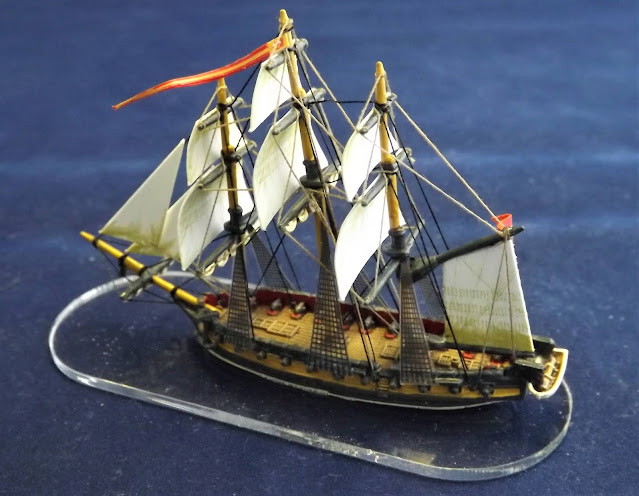 In addition three of the four Spanish armed merchantmen, carrying mercury, at the Battle of Cape St Vincent were under 18-20 gun vessels and these models would serve very well as potential targets in any such game. 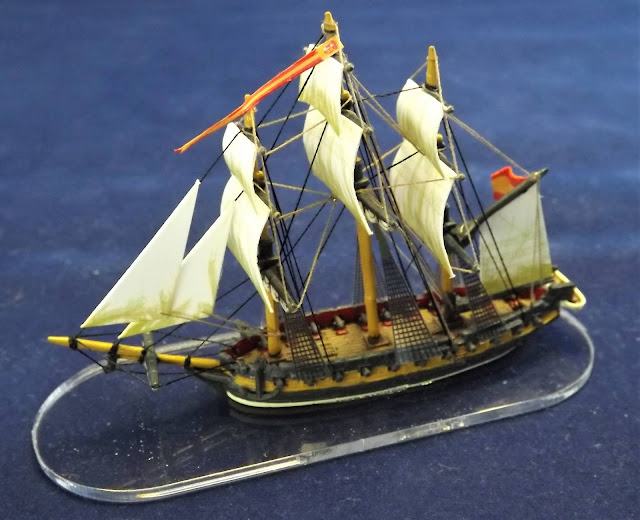 As you will see from the planner my collection required a Dutch corvette and I covered off the three British v Dutch scenarios in my post looking at my previous Dutch frigate and brig builds - see the link below for the details of those scenarios. 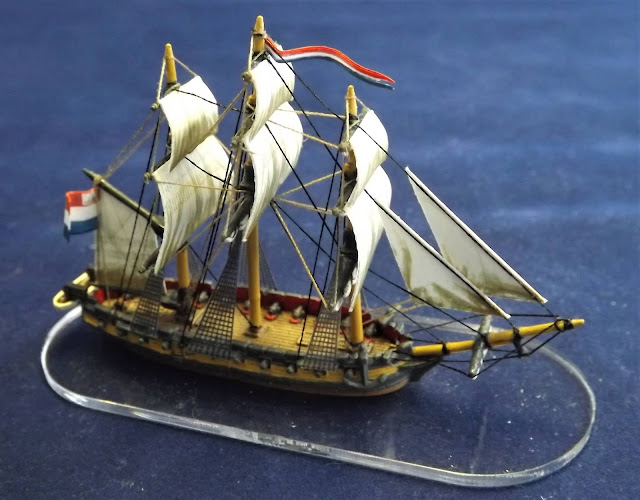 So this new addition will do very nicely standing in for the 24-gun Waakzaamheid, that accompanied the 36-gun Dutch frigate Furie in their action against the British 36-gun frigate Sirius. 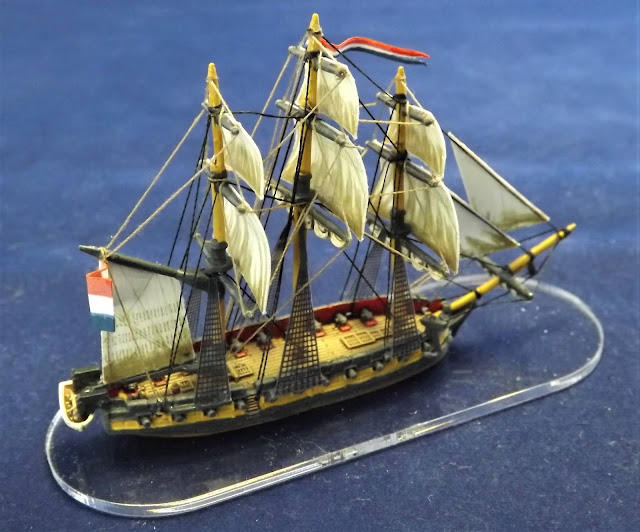 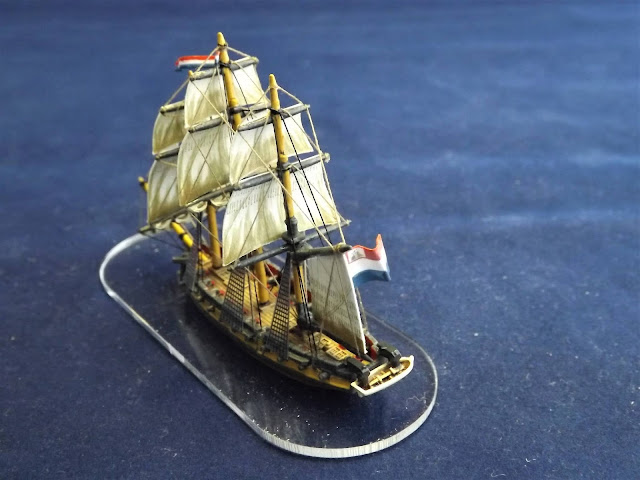 The Dutch make an exotic addition to any small ships collection and facilitate scenarios in the Caribbean and East Indies and the corvette compliments nicely the three other ships built previously. 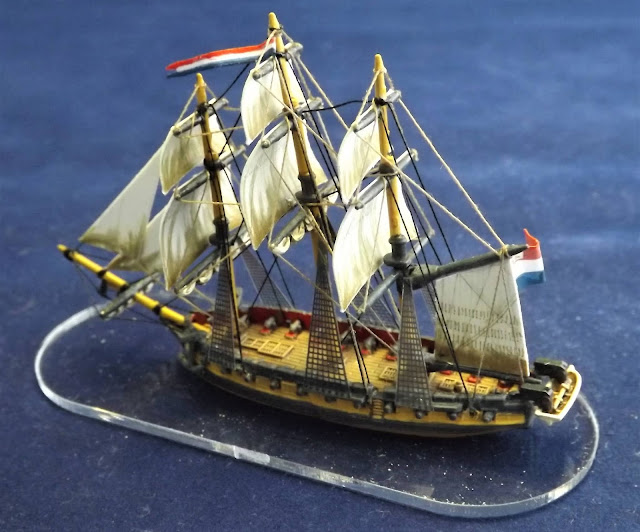 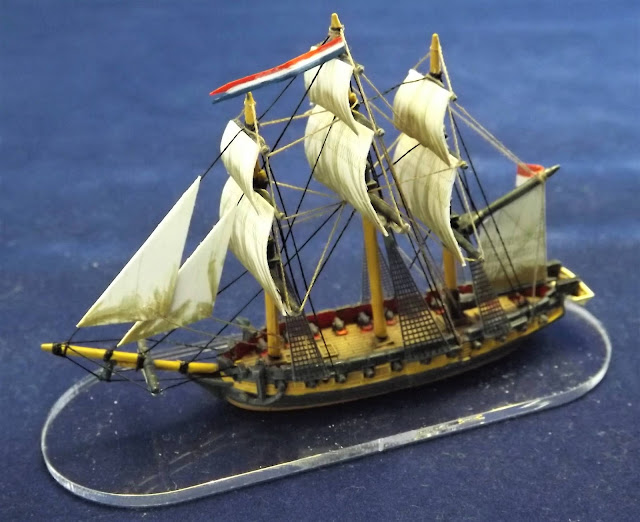 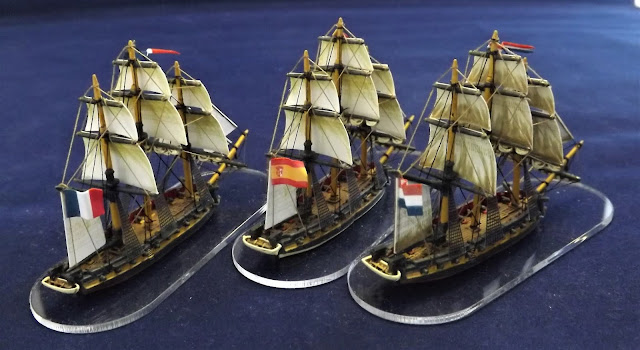