With the first of my Peninsular War scenarios, Rolica having its run out, I thought I would post a few thoughts around the construction of the next one, Vimeiro.

With the defeat of DeLaborde's force at Rolica, The French general, had drawn off to the the south east with the probable intention of meeting up with General Loison's force. It became obvious to Wellesley that they were not plannig a counter-attack until reinforced, and he had no reports of French forces moving north from Lisbon.

Wellesley estimated Junot's force in Portugal at less than 25,000, and indeed some units of the actual force of about 30,000 were as far away as Elvas and Almeida, busy suppressing the poor local population. With only 13,000 men under arms and an additional 4,000 infantry in transports close by the coast it was important to get them ashore as soon as possible. 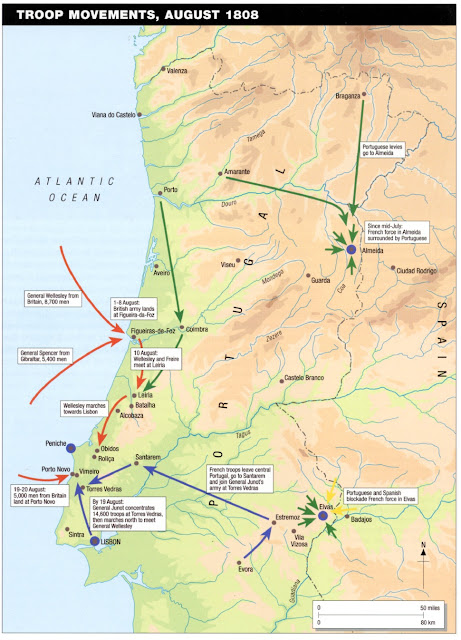 With Peniche the only safe harbour between the Mondego and Lisbon in French hands and the option to sail back to the Mondego impractical, Wellesley opted for a beach landing at Porto Novo at the mouth of the Maciera River, where the headlands at either end of the beach offered some protection from the heavy Portuguese surf.

Orders were issued to prepare the landing and Wellesley's force moved into a position at Vimeiro to cover them. General Anstruther's brigade landed on the 19th August and Acland's on the 20th. Wellesley was briefly in command of 17,000 troops, but this was not to remain so for long with the arrival of Sir Harry Burrard on the afternoon of the 20th.﻿

After a long conference Wellesley was ordered not to move from his present position. Burrard decided, correctly, that Wellesley was underestimating the enemy's strength. An additional force under Sir John Moore would soon come ashore at the mouth of the Mondego. Sir Harry planned to await their arrival before moving against Lisbon, even though this might cause a delay of two weeks.
﻿
Having issued his orders and with letters to write, Sir Harry decided to stay on board his ship another night. Wellesley rejoined the troops ashore. With only a few hours of independent command left there seemed no opportunity to distinguish himself further.

Soon after midnight on the 21st August, Wellesley received intelligence that a French army was moving in his direction from Torres Vedras. He sent out additional patrols and had his entire command under arms in line of battle before dawn.

Wellesley's position at Vimiero was only an interim one as he had expected to seek out the French, and was taken up with no real expectation of defending it. All except two brigades and another battalion were on the Western Ridge (Hill's position on the map) as it is called in British accounts, which whilst steep to an attacker is a death trap to a defender forced to fall back as the rear is precipitous and trackless.

The approaching French were led by General Jean Androche-Junot, who having concentrated his forces at Torres Vedras was now determined to drive the British into the sea.

Junot was aware of the difficulties of attacking the British position, but his reconnaissance told him that their right extended some miles to the North. Unaware that this was mistaken, he considered that a vigorous attack would therefore split the line into segments and once broken he could gain the beaches and their link with the fleet. Surrender would be the only option to massacre. Whilst he could not avoid giving away his intentions with a flank march, the British would be too slow to interfere with him. Accordingly, Wellesley's attention was brought to the dust clouds kicked up by the French columns, coming not towards him but marching past his open flank.

Immediately grasping Junot's intention Wellesley regrouped his forces. Leaving Hill on the Western Ridge, and Anstruther and Fane at Vimiero, Crawford and Trant were sent to cover against a swinging movement from the North West. The remaining brigades were sent across the back of Vimiero and up the Eastern Ridge.

Junot was able to see the British march down the ridge, but then lost sight of them. All he was aware of was his outflanking brigade was outnumbered, and so he detached another brigade, Solignac to reinforce the former Brennier's, ignoring the fact that it would be too late.

Already holes were appearing in his strategy, as the two brigades were taken from different divisions, and by not appointing a divisional commander, there could be no co-ordination to his flanking forces.

With only eight battalions, three cavalry regiments and seventeen guns left for the main attack, Junot detailed Charlot's and Thomiere's brigades accompanied by seven guns to attack Vimiero Hill. The grenadiers, cavalry and remaining guns forming the only reserve.

The British Battles site gives an account of the action during the battle, which was remarkable in that it was the first occasion that a veteran French army had been met in the open field using classic French column tactics and defeated by an army using classic linear tactics. The Vimiero battle report, like the Rolica action a few days previously, should have become required reading for all subsequent French commanders who came up against an army commanded by Wellesley. Both actions demonstrated the newcomers abilities on the attack or defence. It took the French several painful reversals to understand his skill and ability in both situations.

When looking at recreating this battle as a scenario one is forced to conclude that this is a battle of two combats  separated in time and distance to present two separate scenarios in their own right. That being said one of the more interesting aspects of the battle is the "what ifs" presented by the earlier manoeuvres of both commanders as the defender -Wellesley, responded to his adversaries - Junot's moves. My first draft has the former proposal with two distinct attack and defend set ups with the classic Peninsular War reverse slope battle that Sir Arthur Wellesley became famous for. However, I am also thinking of doing  the whole thing as one battle giving each commander options to modify the set up of their historical counterpart, and then playing the battle that unfolds from those modifications. As previously, I am keen to assess any outcomes against the historical result when looking at victory conditions.

As before your thoughts and comments are most welcome. I will be running the Vimiero games in the next two months as a lead up to Legionary in Exeter in May, where I plan to run a demo game of the attack on Vimiero Hill using Napoleon at War.