Fathers Day at the Cricket

Well it has been a very busy week for me with work and home life interrupting the projects at JJ's Wargames. Midweek had me away from home on a two day business meeting, and then yesterday I had a great day out with my wife, Carolyn, and Tom, my eldest son, in Cardiff, indulging in another great passion of mine, cricket. We travelled up to watch England v New Zealand in the International Cricket Council (ICC) Champions Trophy. 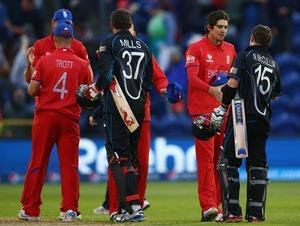 In April I commented on Palouse Wargaming Jounal , Jonathan Freitag's blog, about a post he made about the pleasure of watching baseball in San Francisco. Well here in England, summer is the time for us cricket fans to get out and enjoy the weather and some great entertainment with England playing against various other cricketing nations from around the world.

This summer we are blessed with the hosting of the ICC Champions Trophy, a one day competition, between the top eight nations in world cricket. Yesterdays match in Cardiff saw England in a knock out match vs the Kiwis, the winners progressing to a semi final match on Thursday.

Did I mention weather!! Well yesterday was not a good day to play cricket. We left home at 8am for an hour and a half drive to Cardiff with a drizzle that looked set to last the day. When we arrived at the ground at 10.30am we got into the stand in time to see the two sides lined up for the national anthems and then we just hung around in the ground for hours just hoping the weather would break.

The deluge finally stopped at about 2.45pm and after the covers were taken off the pitch and the water removed from the outfield the game started at 3.45pm as a reduced overs match of 24 overs with England being put in to bat by the Kiwis, having lost the toss.

England came out and did the business, with some great batting posting a total of 169 in their 24 overs. This left New Zealand needing to score at just over 7 runs an over.


The England bowling attack opened with Stuart Broad and Jimmy Anderson and within the first three overs the match swung towards England with Anderson taking out Luke Ronchi and then clean bowling the Kiwis danger man of this summer's one day games between the teams, Martin Guptill.
These early wickets seemed to peg back the Kiwis and with the run rate never really getting above 6 an over it was not surprising that the game came to an exciting conclusion with about 21 runs needed to win off the last 6 balls.

With Anderson brought back to bowl the final over, the chances of New Zealand causing an upset looked even more unlikely, and despite a defiant boundary 4 runs from Kyle Mills in the over, the match finished with a 10 runs win to England and a semi final match vs India or South Africa on Thursday.

We had a great days entertainment and were shattered when we got home about 10.45pm last night.

In between the cricket and work I also managed a bit of painting and have just finished off the 5th battalion, King's German Legion. Stand by for some pictures. Also I have another exciting little project on the paint desk featuring some new stuff for the Napoleonics, which I am hoping to be able to show you next weekend!!
Posted by carojon at 00:56