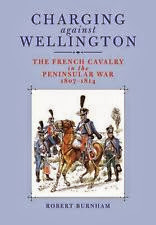 I finished reading this book a few weeks ago and thought I would share my thoughts about it.
I have to say, congratulations to Robert Burnham, I'm really pleased I bought this book and added it to my library. The information contained within is priceless for the Peninsular War enthusiast keen to understand the organisation and command of French cavalry units during this long campaign, during which the French army went through different phases. The war started with the French very much on the offensive and, with the arrival of Napoleon himself, a rapid increase in the number of cavalry units and effective commanders. As the war continued and the Emperor left for other campaigns, never to return, the cavalry was gradually denuded of units and, just as importantly, able commanders. This at a time when the French strategy was changing to one of pacification and policing where cavalry had a vital role to play, particularly in a land mass as large as the Iberian Peninsula. Then as the war turned against the French on all fronts the decline in cavalry numbers increased with the withdrawal of French armies back to France.
Thus the information about the units available to commanders in the theatre are described against this backcloth of events. The description of Provisional Cavalry Regiments was very instructive, particularly for me as I am constructing orders of battle for the Vimiero campaign and deciding on how to grade the morale and efficiency of these kind of units. The book clearly describes how these units were put together with men and NCO's the Regimental commander chose to leave back in the depot. They were designed to be able to take on much inferior opponents and could perform adequately against their Spanish and Portuguese opponents, but would be found out when up against the British, Sahagun in 1808 during the Corunna campaign a classic example.
This book is not a rollicking read of stories and anecdotes about the exploits of the French cavalry. If you are looking for that I would suggest there are plenty of other books out there that will fulfil that role. What this book is, is a gold mine of statistics and facts about the commanders and units together with an overview of the role and deployment of these men during the war.
The back cover gives some excellent examples of the information contained within.
If you are interested in the French Army in the Peninsula and want to build war gaming units with a basis in the history of the campaign then I would say this book is invaluable and well worth picking up. Needless to say, I am now re-evaluating the stats I have previously given my French cavalry units, in scenarios I have constructed, based on the information in this book.
Recommended reading.
Posted by carojon at 03:44