Today at the Club

I 've spent a very nice day today at the our monthly get together at the Devon Wargames Group, which is my first game at the club following the summer break. The posts on the club blog about our games this weekend will be slightly delayed as both Steve H and myself, who hosted today's games, are off to Colours at Newbury tomorrow.

So to wet the appetite, as they say, I can report that I managed to run my game and play in Steve's which made for a highly entertaining afternoon.

My offering was to run HMS Shannon vs USS Chesapeake in their 1st of June 1813 showdown during the War of 1812. This being the 200th anniversary year of this famous action where the Shannon captured the Chesapeake in just 15 minutes of bloody action. 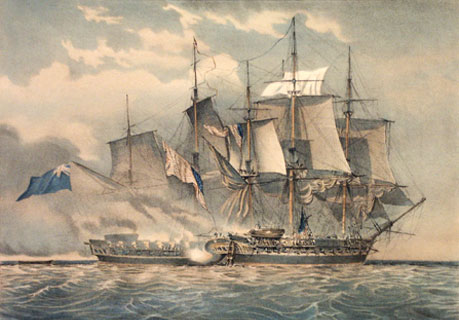 You'll have to wait for the game report to find out what happened, but fun was had by all and the "Eight Bells" rules app performed very well.

The other game on offer at the club today saw Steve H running out his 15mm Seven Years War collection with a battle between the French and an Anglo-Hanoverian Force.

The rules used were Koenig Krieg which I had seen but never played. They were a big hit and I can see some more SYW action using them coming up in future. The basing system would also allow me to use the same figure collection for the odd game of "Maurice" now and then.

If you would like to read more, We should have a post up on the Devon Wargames Group blog by Monday.
Posted by carojon at 10:51