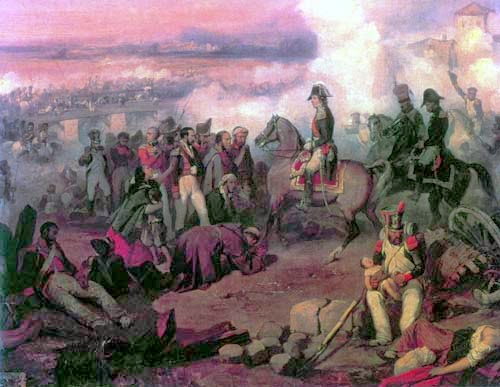 That's it, no more flock, plaster, bark, ballast or floor tiles. The table is now ready for all the stuff that sits on it and distracts the eye away from all the little imperfections that might otherwise take the attention away from the actors that will grace this stage, namely the metal warriors of France, Britain and Portugal. 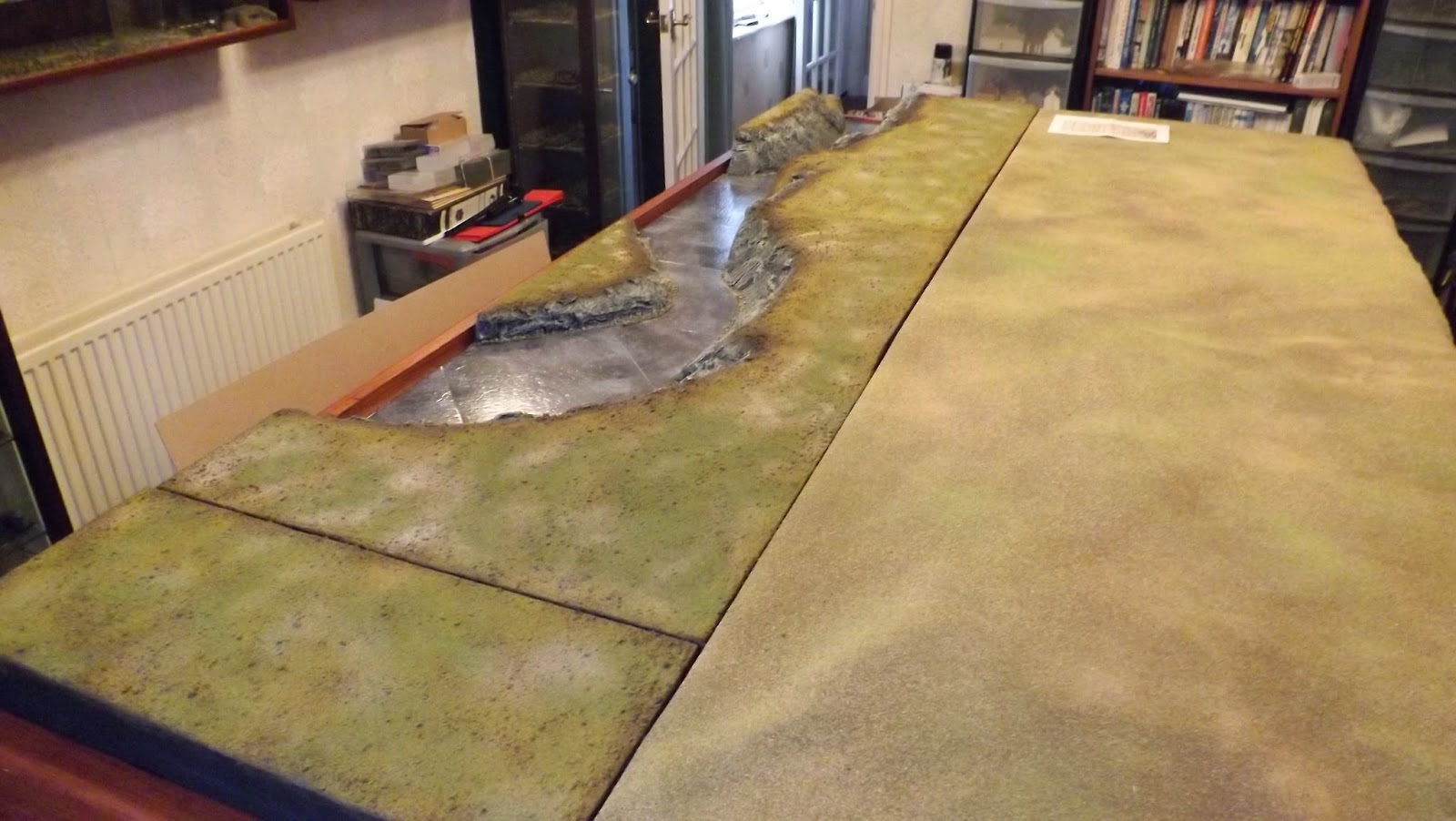 As you can see, the light olive flock is not an exact match but, I think, good enough to work once the table is set up for battle. This little exercise has got me thinking about another smaller battle fought over a river gorge, namely the River Coa and the Light Division's scrape with Marshal Ney. So when we get to 1811 I might have to get the cork bark out again! 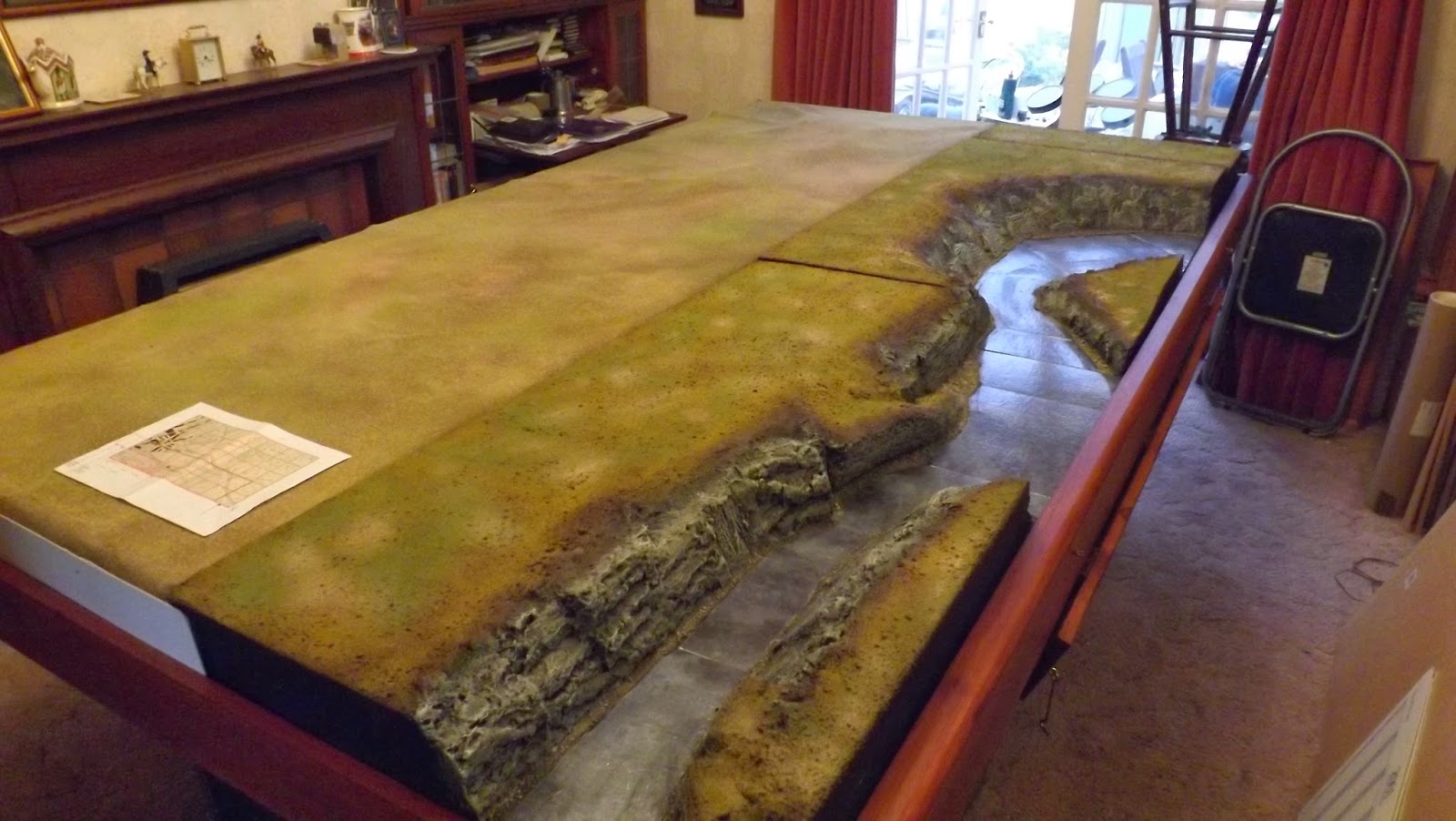 Thank you to everyone who has joined me on this project and offered their encouragement. I really didn't know where this table design would end up in terms of the final look and the fact that all the comments I've had have been so positive really gives me a spur to press on with other ideas to depict key battles of the Peninsular War. 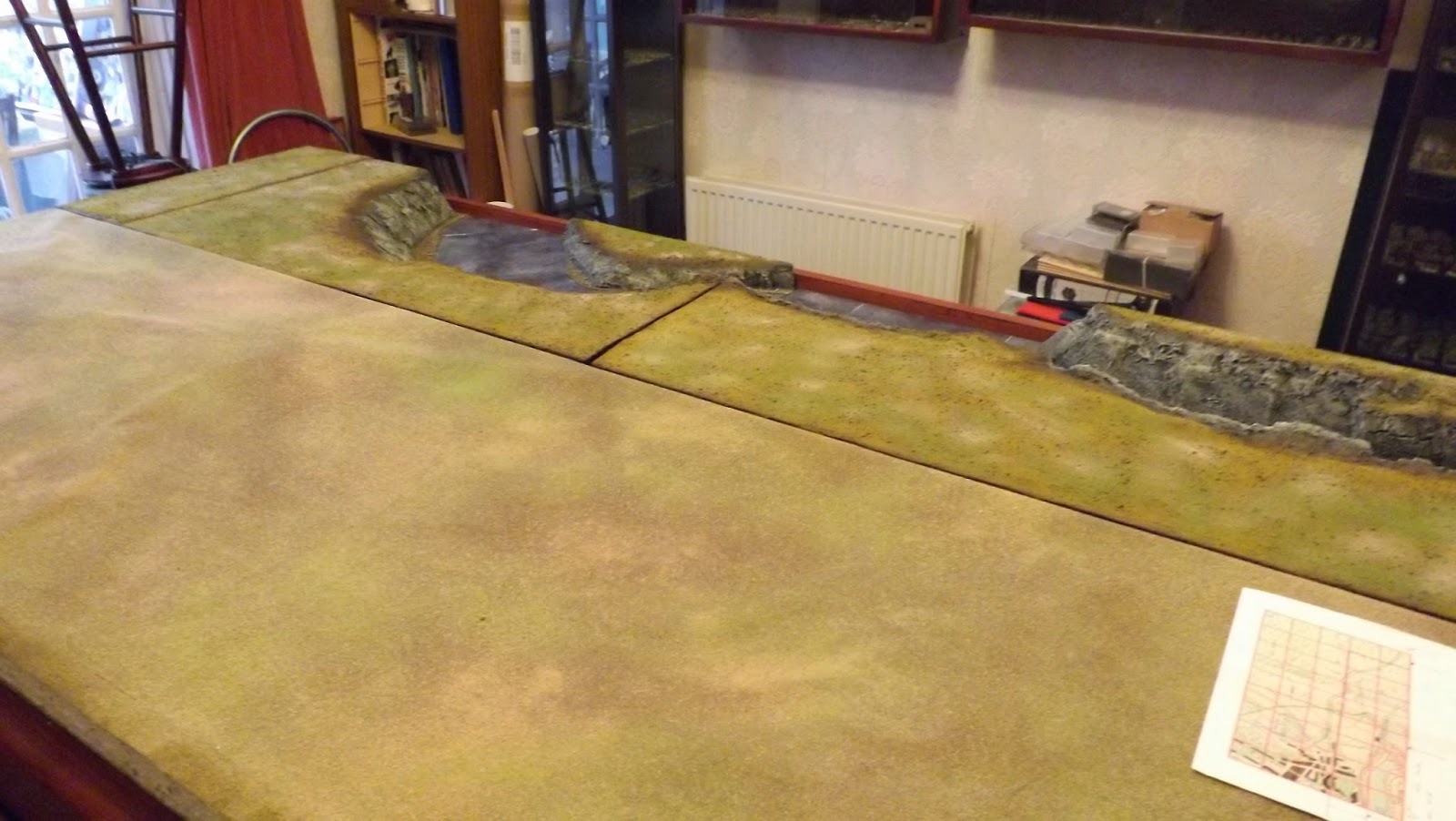 One thing that was highlighted was the little lines between the river tiles, that detracted slightly from the overall look. The answer was a small bead of PVA run along each seam and allowed to dry opaque. It really does seem to take the edge of the seams quite literally. 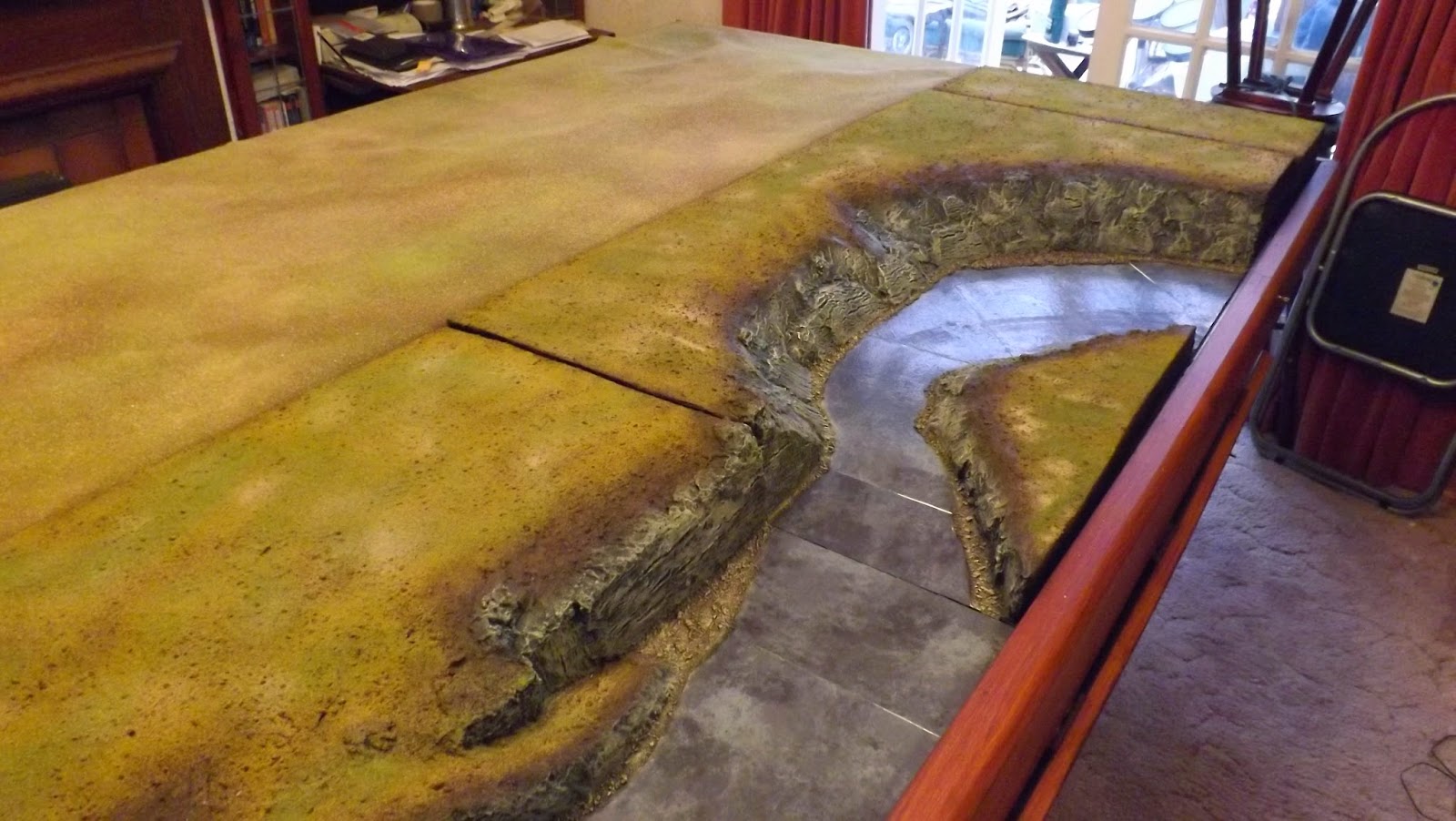 I was really keen to get this done within the week as I start training for a new job next week and then I'm off on a weeks classical tour of Rome which is an 18th birthday present for my younger son Will. We're all keen fans of ancient Rome in our family and I have another project lined up for "Hail Caesar", so I'll post a few pictures of the sights during that week. Then it's into the new job so time will be limited but I am aiming to play Oporto in May, allowing for the buildings to be painted and the two regiments of cavalry to get done.

The good news is that the Portuguese 2/16th Infantry are about halfway done so should be finished this week. 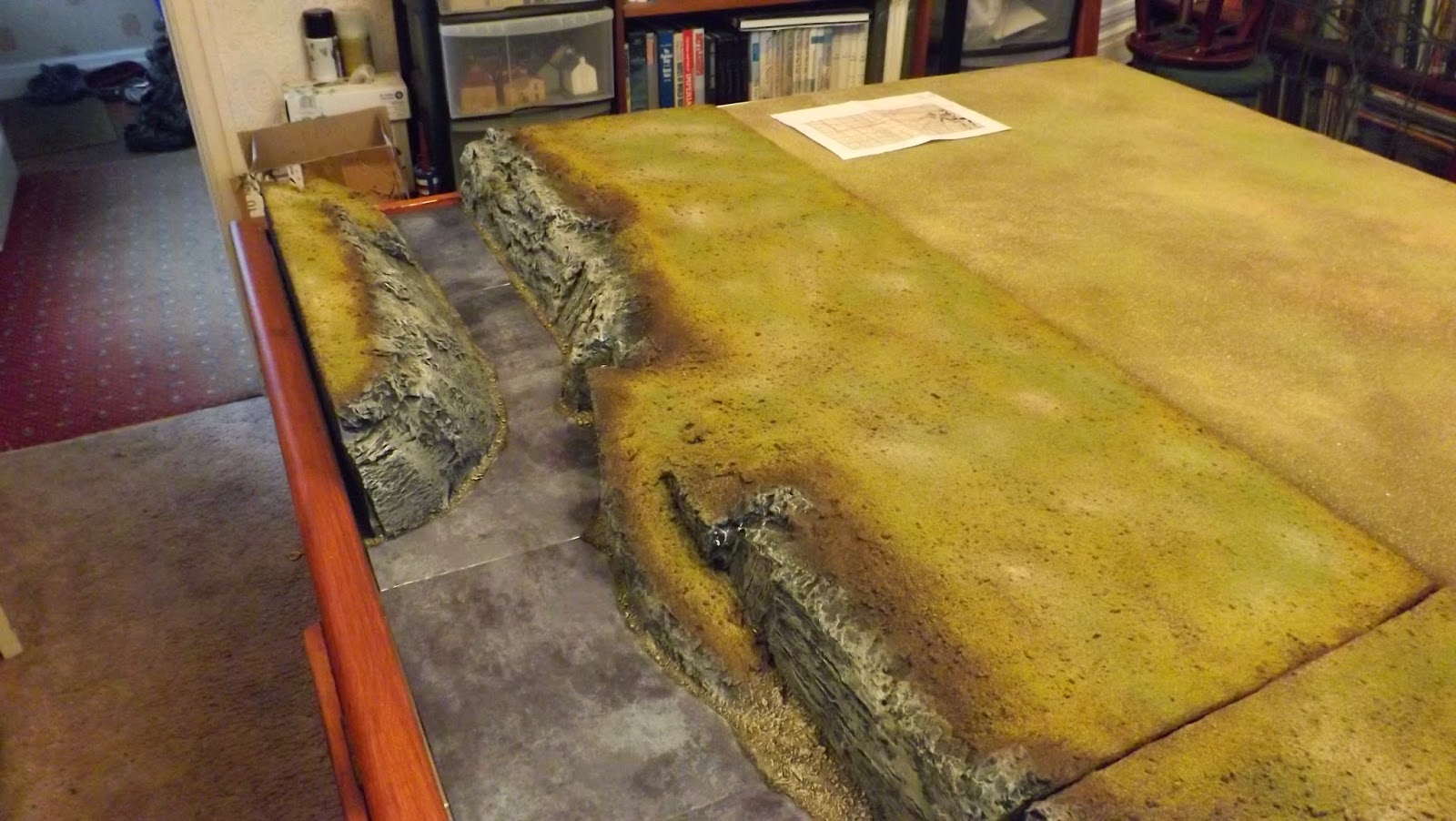 Once again thanks to everyone who got in touch and please drop me a message if there is something you want to know about this model that I didn't cover in the posts.
Posted by carojon at 10:50