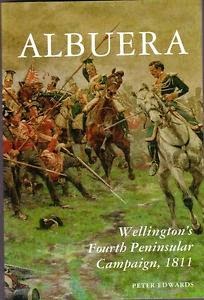 I thought I would post my thoughts on a book I have just finished reading, Albuera by Peter Edwards.

The first thing to say is that it has taken me six months to finally finish reading this book. I speak as one who regularly read a book a month for several years previously. So what has changed?

I have thought long and hard about this recent change in my reading habits and have concluded the issue is two fold and both technological, namely the IPad and the IPod.

Both the aforementioned bits of kit are able to offer multiple books in audio and visual formats together with other distractions such as podcasts, and I find I have developed a bit of a surfing approach to my reading/listening, which I mostly do in the evening before turning out the light. I am not happy about this as the ability to focus on a main book for a month or so and get the full on input of its content is a pleasure that feeds the mind, something that flitting between different media fails to do. I have therefore decided to get control of this new habit and discipline my time back to regular bedtime reading, starting with Wellington v Massena that I picked up last night.

So back to Albuera. Firstly I don't intend this as a full on review. This book was first published back in 2008 and I have found and read some excellent reviews prior to my purchase. These then are my thoughts in the perspective of an historical wargamer keen to see my games reflected in the historical text.

The first thing to say is that this is not a book just about the battle of Albuera, but more about the campaign of 1811 between the British and French forces in the Peninsula at that time. Thus the text follows a timeline of events covering the combat at Barrosa in March and ending with the final clash in September at El Bodon, taking in the two major actions at Fuentes, Albuera the two failed sieges of Badajoz and the minor actions in between. If you want a book that just focuses on Albuera I would turn to one of my favourite books of all time, Albuera by Guy Dempsey which forensically breaks the battle down almost minute by minute with excellent detail and maps.

This being said I found Peter Edwards book a jolly good read with plenty of references from British eyewitnesses mixed with a former soldiers eye for analysis of the sources and the facts. I am sure the "oh no not another biased British history" pundits will have a problem with this, but the fact is is that most of the accounts from this period have come from British veterans who wrote down their experiences. I wish I could find more such references from French, Spanish and Portuguese sources, but given those limitations the book allows the reader to follow the events of that year in the context of why the opposing commanders were doing what they did and how the common soldier on the ground experienced those events.

As with most other commentators on the period, Marshal Beresford comes in for severe criticism for his handing of the Battle of Albuera and indeed for his performance leading up to it. I think from this and other sources I have read Beresford was quite clearly unsuitable for independent command and unable to deal with the pressure, becoming paralysed when his leadership was most required. His reputation is somewhat redeemed by his unquestionable organisational abilities and this fact was born out by the steadiness and courage displayed by the Portuguese units trained under his leadership that helped salvage a victory from defeat in the closing stages at Albuera.

The author took time to analyse certain accepted facts about the war that have sprung from the histories of Napier, Oman and Fortescue, such as the uncontrolled, almost thoughtless activities of British cavalry and the unreliability of the Spanish. There are obviously well recorded instances of both these deficiencies happening, but to balance these Edwards emphasises the steadiness and courage of Zayas' infantry at Albuera as they faced down the divisions of Girard and Gazan for an hour before any support from their British allies earning back a great deal of respect from the redcoats that was lost to them at Talavera.

In addition I learnt some new facts about the brilliance of British cavalry at the charge and its ability to win when it counted, namely Colonel Head leading the 13th Light Dragoons at Los Santosa and the brilliant ambushing of Latour-Maubourg's cavalry division of about 3,000 sabres at Usagre by Major General William Lumley with about 2,300 sabres. The action caused 250 casualties to the French force with as little as 20 casualties to the British. However the main impact was a psychological one causing the French cavalry to become very wary of tackling their British counterparts from then on.

In addition to the text, the maps of the main battles were well illustrated, an area that can often let the best written books down.

What I think I got from this book was the highlighting of how pivotal a year 1811 was in the overall outcome of the Peninsular War. It was in 1811 that the initiative and the confidence in the face of the enemy deserted the French and moved irrevocably to Wellington and his allied force. This year of campaign doesn't have the dash and elan of Wellington's later movements and actions of 1812 and 1813 but the lightening campaigns of those two years could not have been as successful were it not for the fact that in 1811 the French commanders and their armies started to doubt their ability to overcome the allied army under Wellington in open battle and this timidity impacted on their behaviour for the rest of the war. The fact that Napoleon started to draw down his forces in the Peninsula only exacerbated an already unstable French position.

I have, following reading this book, decided to get a copy of Ian Fletcher's "Galloping at Everything" to get an opposing view of the abilities of British cavalry. I am beginning to wonder if the commonly accepted opinion of British cavalry and its commanders  as being rash and uncontrollable is a little overstated. Yes there are clear examples of this behaviour starting with Vimeiro and ending with Waterloo with even the Duke weighing in with his criticisms. Perhaps it is the case that as units became more experienced and became aware of their superiority to their opponents, occasions of great success coupled with control were possible as demonstrated at Sahagun, Benevente and Usagre.

So in conclusion, I am very pleased to have read this book, finally, and to have it in the library. If you haven't read it and you want a better understanding of what happened in 1811 in the Peninsular War then get a copy.
Posted by carojon at 15:25