The Campaign in Northern Portugal January - May 1809, Part 2

The first part of this post covered the advance into Portugal and the battle between the French, Spanish and Portuguese forces operating on the northern frontier between Spain and Portugal.

We left off with Marshal Soult established in Oporto at the end of March 1809 having to retake control of his lines of communication from insurgents and levies in his rear area and vainly attempting to discover news from other French forces operating nearby.

So what was happening with the remaining British forces in Portugal and their response to unfolding events?

With the departure of Generals Dalrymple, Burrard and Wellesley in September 1808 and the opening of Sir John Moore's campaign in October, the command of British troops remaining in Portugal devolved upon Sir John Craddock. By the beginning of 1809, the defence of the country rested principally on the meagre force of nine British and four King's German Legion battalions with which he had been left. In addition he had eight cavalry squadrons and one artillery battery capable of movement.

Instead of putting a great effort into the rebuilding of the Portuguese Army, the Regency had insisted on giving their trust to the militia and Ordenanza, which had their uses but could not stand in the line of battle.

In addition to these forces the arrival of Sir Robert Wilson had led to the establishment of the Loyal Lusitanian Legion, a body of men trained to British Light Infantry tactics officered by British volunteers and taking Portuguese volunteers into the ranks. This well trained and led unit would eventually field three battalions of light infantry armed with muskets and rifles, supported by their own light cavalry and a battery of light artillery. This forerunner of a modern day commando unit, they would operate on the Estremaduran border with Spain, working with guerrilla units and would be an important force keeping Marshal Victor's troops occupied and tied down.


There are some good sources on the LLL and well worth reading to get an understanding of a very important force in the early part of the Peninsular War.
Narrative of the Campaigns of the Loyal Lusitanian Legion
Alcantara 1809 - Osprey

Sir John Craddock could lay no claim to being a distinguished general, and it seemed to him that the French armies which had overrun Spain would soon be facing him. News of the defeat of Cuesta's Army of Estremadura at the Battle of Medellin made him decide to concentrate his forces around Lisbon.
Battle of Medellin 28th March 1809
This decision left him few means of carrying out forward reconnaissance and he could not know that the bulk of French forces had been drawn off to the North West by Sir John Moore's campaign, leaving those forces around Madrid with their hands full with garrison duties and their struggle to live off the land.

He was further induced to reduce his troop strength by the diversion of three battalions to Cadiz, due to the British Government's concerns over the security of the Supreme Junta in Seville and its ability to defend this important harbour. This caused some distrust with their Spanish allies fearing the British intended to create a second Gibraltar at their naval base, a fear that proved unfounded.

By March 1809, the British Government had finally allowed itself to be persuaded that the defence of Portugal was practical (see Sir Arthur Wellesley's comments in Part 1 of this post), provided that it did not go in with half measures, and it consequently began sending out reinforcements. It had also, after a Portuguese request, nominated Sir William Carr Breseford to take over the command of the Portuguese army and bring it to a state of efficiency, eventually weeding out old and corrupt officers and introducing them to the British drill book so that they could operate alongside their British allies. 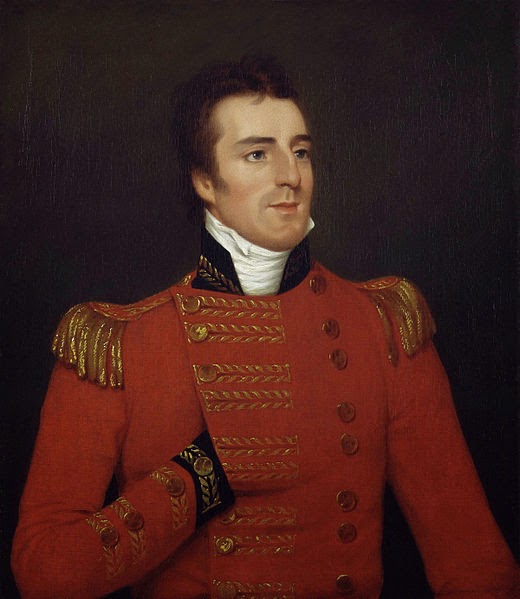 It was Sir Arthur Wellesley who was instrumental in getting the British Government to change its mind about the defence of Portugal and his memorandum on the subject forces one to admire the prescience or foretelling nearly every aspect of the war.

What also encouraged Ministers to accept the plan was that it demanded only 20,000 men in all, backed up by the Portuguese army. With plans afoot to support the Austrian plans for war with a descent into the Low Countries, Portugal would have to be satisfied with a brigade of Guards, some heavy cavalry and reinforcements of junior battalions. The Government had no wish to give command to a more senior general, and as Wellesley had developed the plan, which was essentially a supporting role to the Spanish effort, it was offered to him.

Conscious of the disgust he had felt at his supercession after Vimeiro, Wellesley was determined not to give Craddock his recall, if by the time he landed, Craddock had defeated the invading armies. He had little to fear on that point and on his arrival on the 22nd April 1809, he found the army only slightly to the north  of Lisbon, principally at the suggestion of Craddock's deputy, Sir Rowland Hill. Thus still some way away from the Douro, Wellesley was able to take stock of the situation.

Wellesley learnt that Soult was still pinned down in Oporto vainly groping for news. The division that Victor had left at Salamanca under Lapisse to act as a link between the two Corps had been roughly handled by Wilson's Lusitanian Legion, so much so that it reported the reinforced battalion as a division. Wilson has dominated French communication with the Tagus valley and, only by dummying an attack on Cuidad Rodrigo, could Lapisse induce him to move and thus slip past him. All in all the threat from the north east had disappeared, Victor, with his problems of supply and control, had enough on his plate for the time being.

Wellesley could therefore ignore the threat  from the Tagus valley, although he would obviously have to make allowance for it. Instead he could concentrate on Soult, for by throwing him out of Portugal he would show the British Government was earnest in its alliance. Soult's discomfiture would also remove the threat from the richest part of the kingdom. He was also in possession of the priceless intelligence supplied by a French Captain called Argenton who unhappy at being part of Soult's plans to establish his own kingdom and was part of a plot to remove the Duke of Dalmatia as commander of 2nd Corps and bring the whole Portuguese adventure to an end. He crossed over to the British seeking help and with Sir Arthur promising nothing supplied the British commander with the latest state of French forces in the city.

In addition to his own forces Wellesley would also have access to some of the first Portuguese regular army units ready to take to the field alongside British troops, trained up within six weeks of Beresford's arrival. They of course would have to be overseen and only given tasks suitable for their experience, but they made a welcome addition to the allied army.


Leaving General Mackenzie on the Tagus with about 12,000 men, mainly Portuguese but with a stiffening of British infantry and cavalry, to keep watch on Victor, Wellesley ordered the rest of the army to concentrate on Coimbra. In addition, on the 6th of May, he sent Beresford with a British brigade and 3,000 additional Portuguese troops to support General Silveira at Lamego facing off and preventing General Loison from crossing the Douro.

After one final meeting with Captain Argenton to confirm his latest intelligence reports, Wellesley started his main army of some 19,000 men off up the road to Oporto on the 7th May 1809. The force rested on the 8th to give Beresford's flanking column a good start, and then on the 9th Wellesley started his own manoeuvres to attempt to outflank the French advance guard, but these movements were ill co-ordinated and with a small clash at Grijo on the 11th the French troops were able to pull back over the Douro into Oporto.

Soult's army then destroyed the bridge of boats connecting the town to Villa Nova, and took under guard all boats and ferries to prevent a British crossing. Messages were sent to General Loison alerting him to the presence of British troops and instructing him that he was now the advance guard for a French retreat to the east and that on no account was he to surrender control of the Amaranthe bridge. 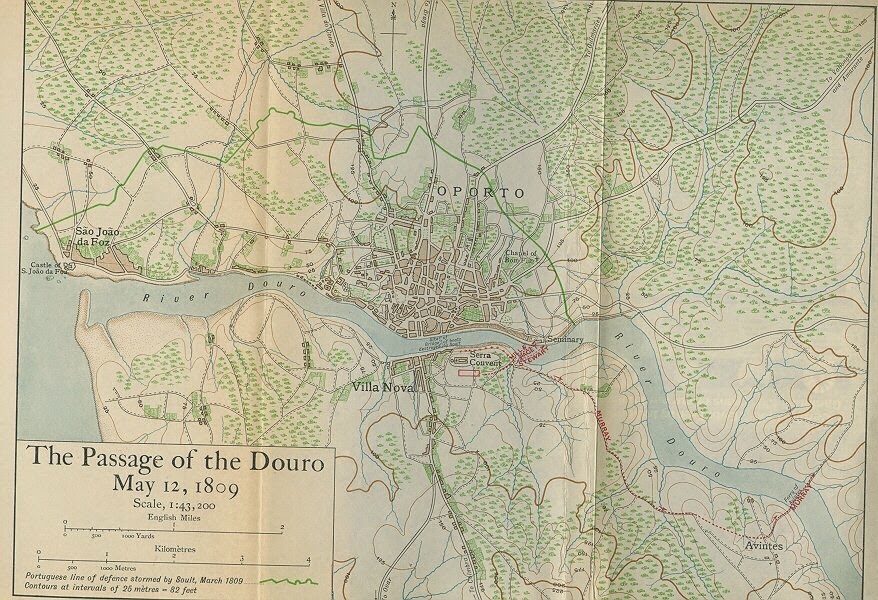 The noise of the destruction of the Oporto bridge was heard by the British army as it approached Villa Nova where they were hidden from view by the bulk of Convent Hill (Fortescue's name for the feature). From it Wellesley took stock of the situation. From his vantage point he could see that Franceschi's  cavalry patrolled to the west of the city, extending as far as the coast, whilst to the north a convoy was being assembled under the escort of an infantry division. Foy's brigade was in quarters to the east of the city. Reynaud's brigade patrolled the harbour front preventing any boats being used by the inhabitants to slip across to the allied side of the river. It seemed the French would be able to retreat at their leisure.

This then is the situation that brings us up to the point that our game will start from and we will see if our present day Soult and Wellesley can match the performance of their predecessors. It's nearly time to get the toys out!
Posted by carojon at 04:39