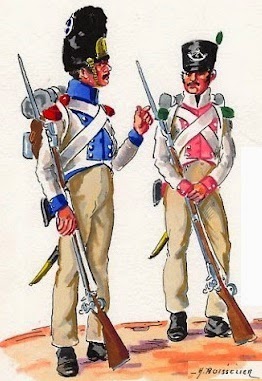 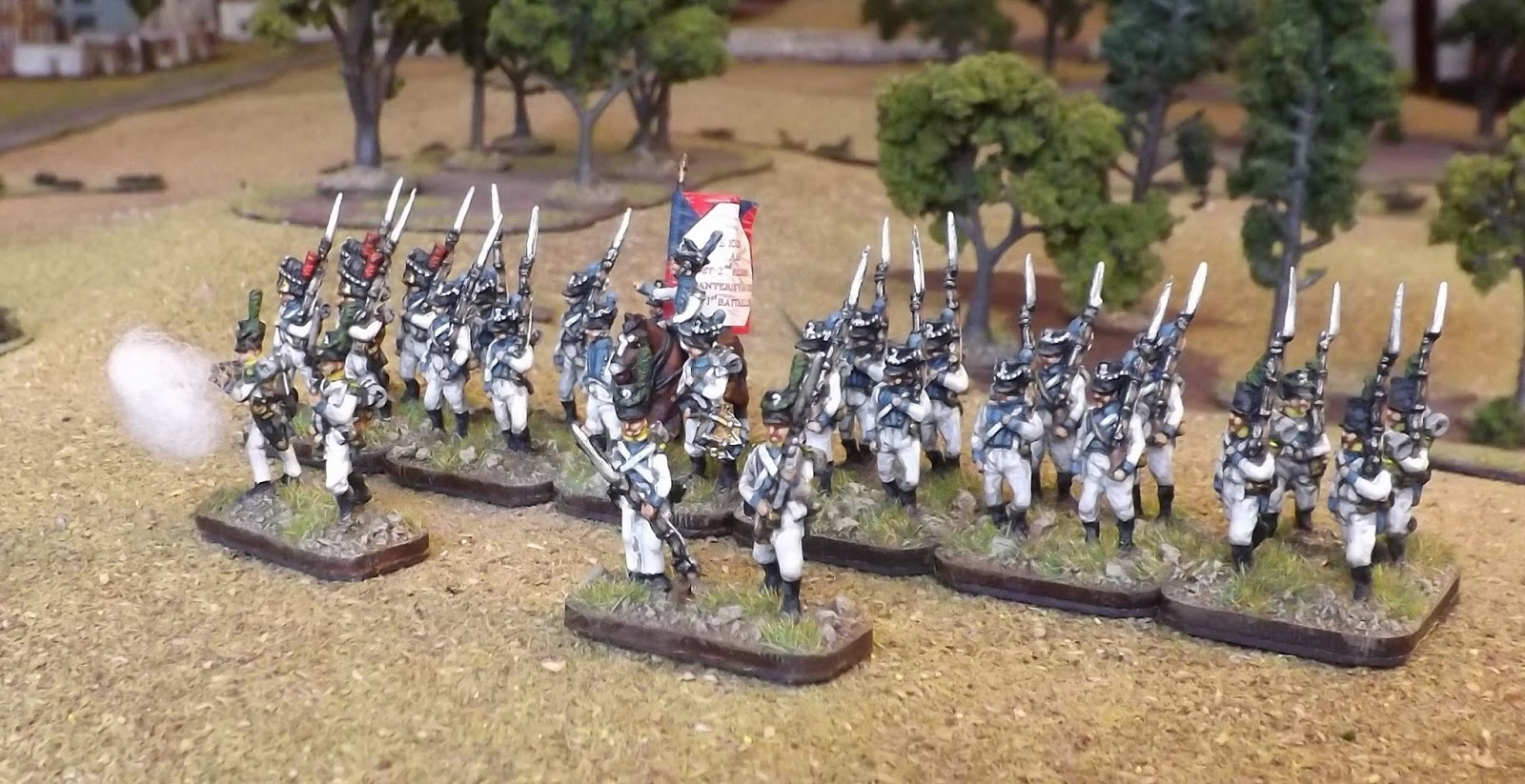 The Dutch infantry contingent in the German Division was a composite regiment with a battalion each from the 2nd and 4th Regiments (Some references say the 2nd and 3rd, but I've gone with Boisselier above and Burnham, http://www.napoleon-series.org/military/organization/c_baden.html). 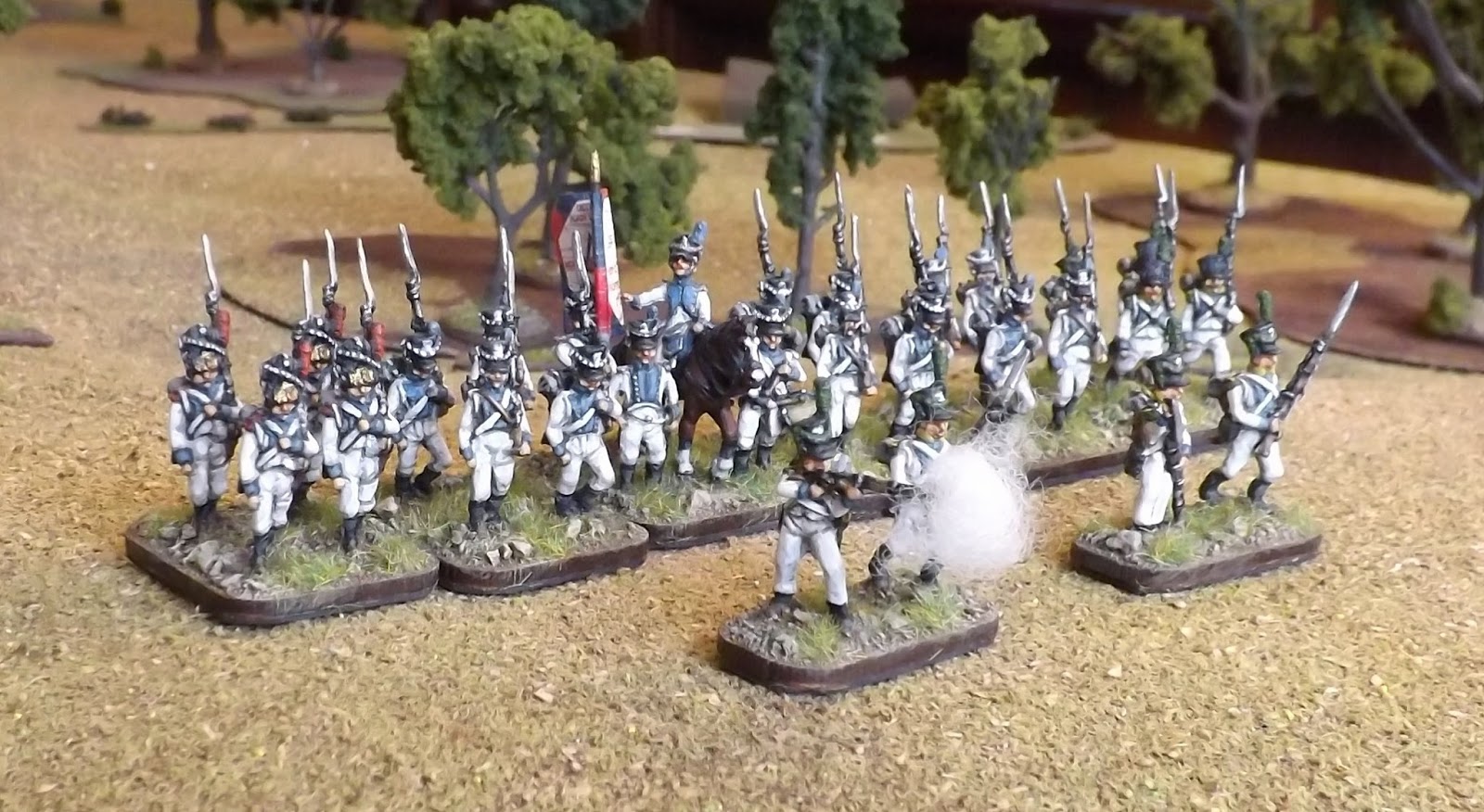 There are not many options around in 18mm for the Dutch contingent in Spain and so I have, as with the other units shown so far, used the "Warmodelling" figures. The figures themselves are ok but are probably my least favourite of their current range. The fusiliers only come in two poses and are not the best castings, the grenadiers are only in one pose and are ok, but the voltigeurs are the most frustrating only shown in an advancing pose, again only one option. Sadly none of the options provide a campaign look as with the Germans. I would have really liked a figure with loose fitting baggy trousers to replicate the Spanish and captured cloth items that would have soon replaced the uniform leggings of the standard uniform. 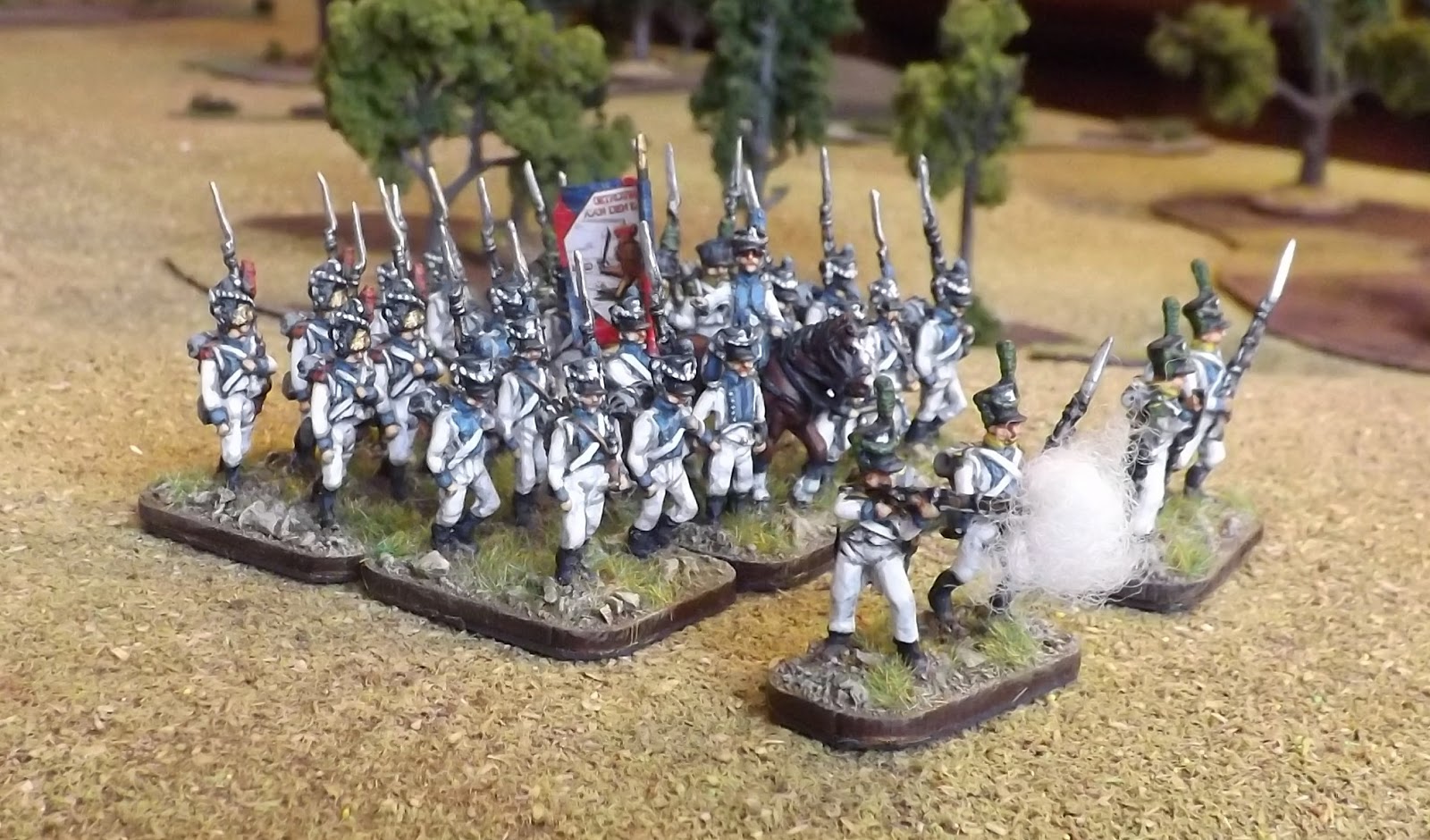 I should say that the information on the Dutch at this time is very limited and often contradictory and the decision to produce a certain look will probably come down to the individual, based on the reference they know and/or prefer, based on corroboration from other sources. I have used several references in the painting of the battalion with this thought process. 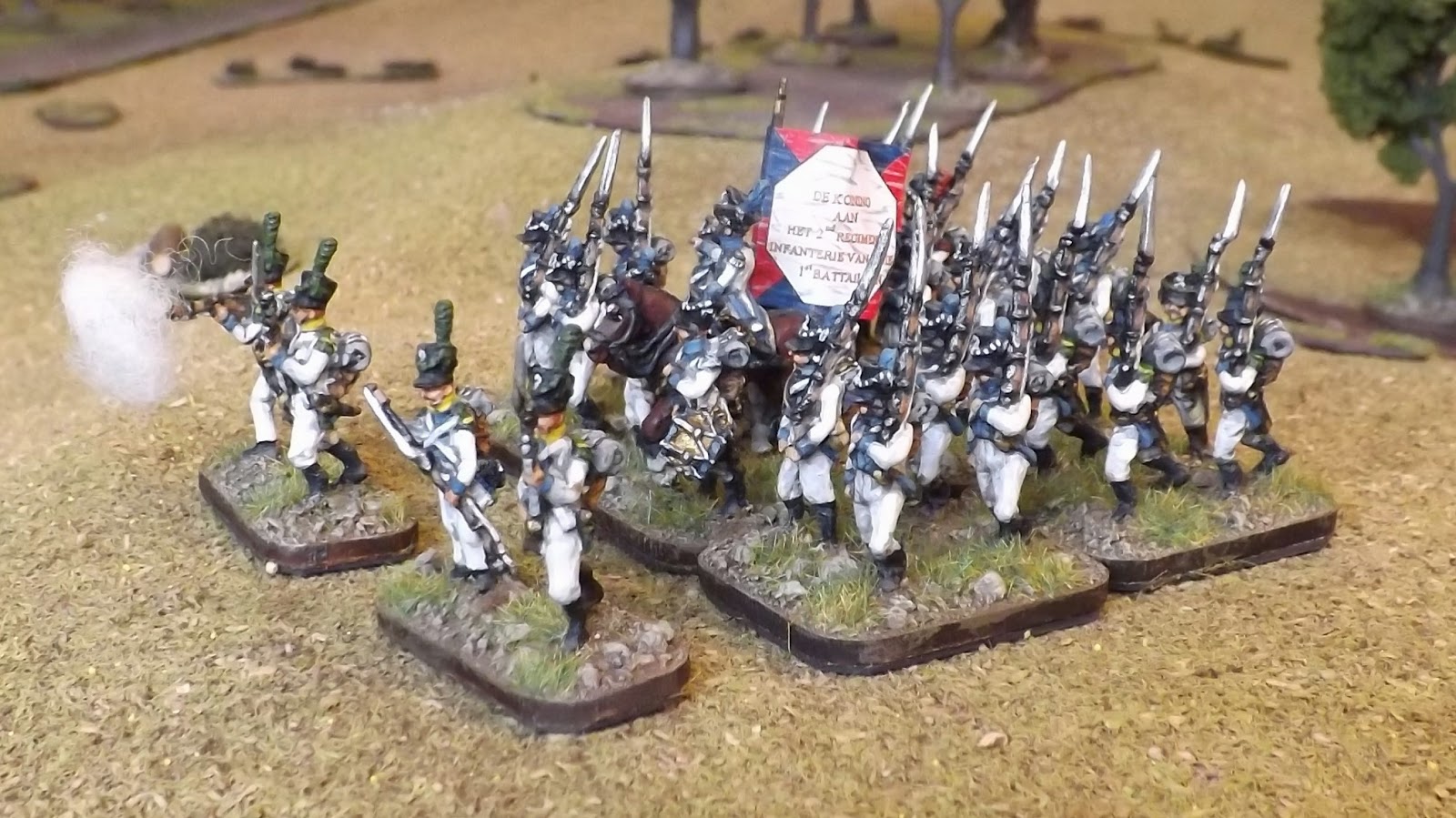 One very interesting source looking at Dutch troops in the field from this period is
Dutch troops in Hamburg
One reference insists the the Dutch voltigeurs copied French practice in having their collars faced yellow, and don't get me started on plumes! 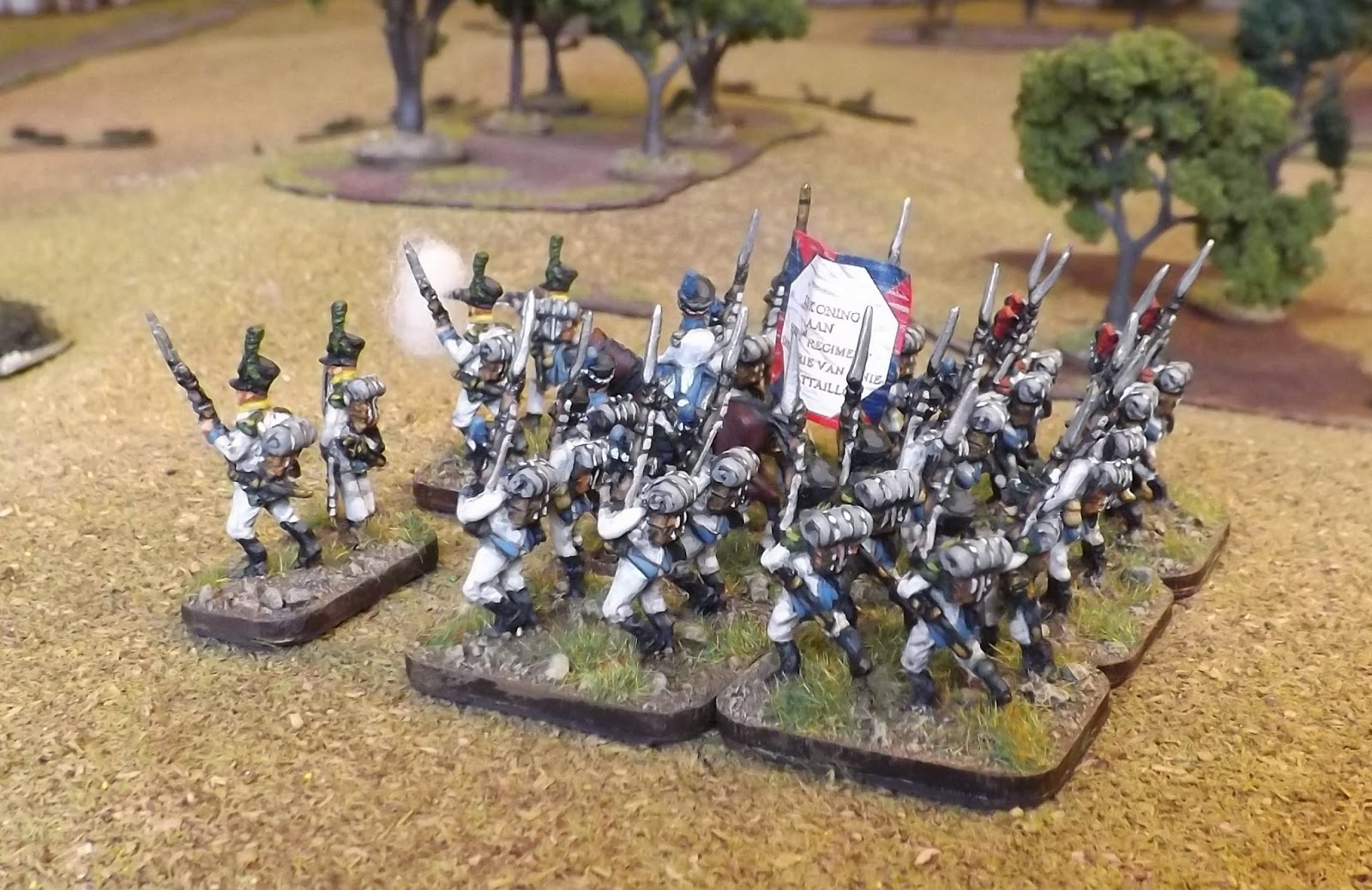 So how to make the best of what we have. First up was a mounted Colonel to represent Baron de Grave. This chap was a French colonel with his plume removed and a piece of brass rod put on the side of the shako with modelling putty shaped to produce a new plume. 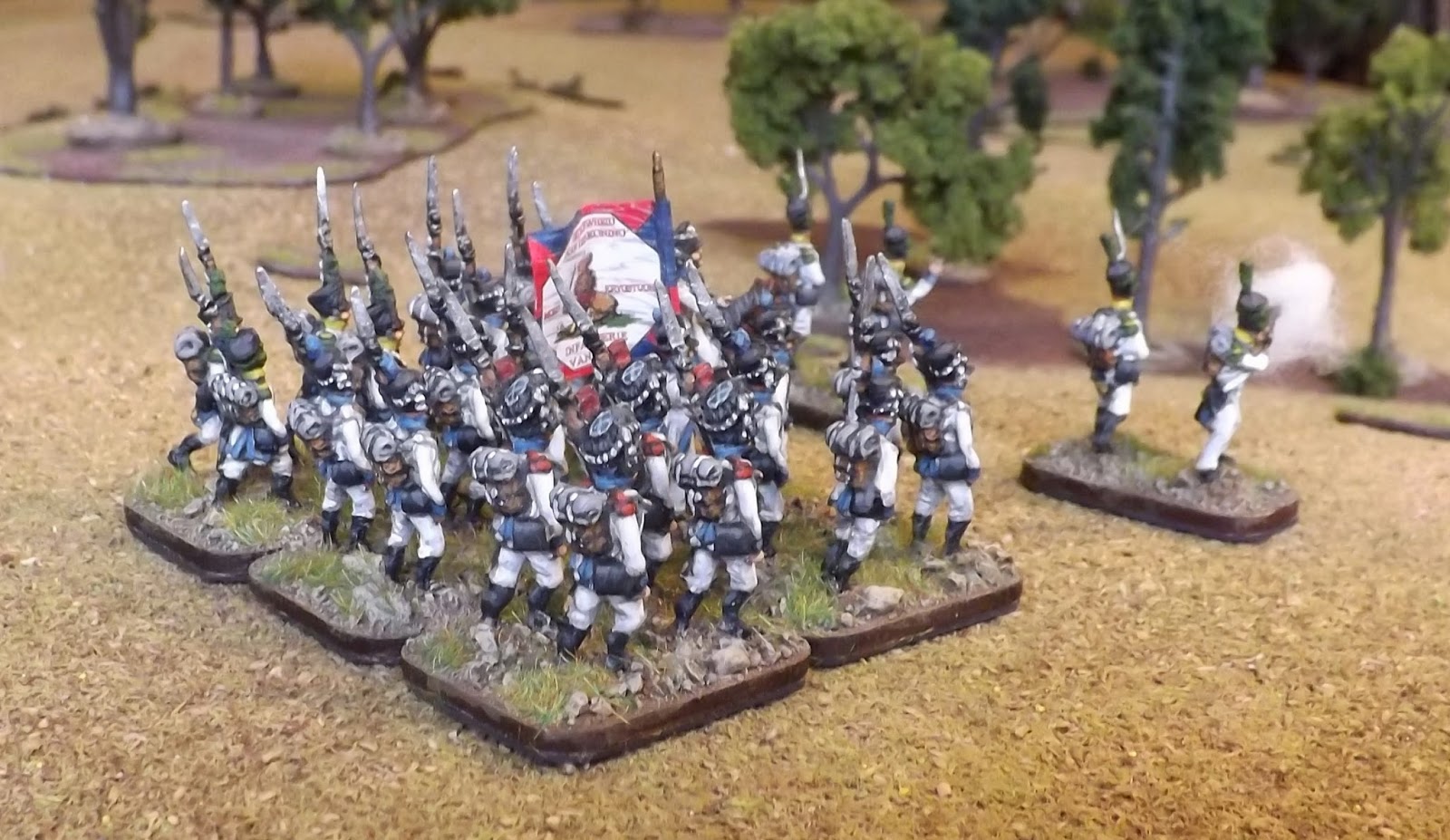 Next up were the voltiguers, both skirmishing and in the unit. As all the other figures were in march pose with sloped arms I decided to remodel some French voltigeurs with side plumes. With the skirmish elements I kept two of the advancing poses and put head transplants on two skrmishing French voltigeurs.

My final adaption was to use an oversize Colour from Maverick Models. The Dutch colours were a copy of the French 1804 standard and should be smaller, but given the Dutch were not using Eagles at this time I decided to give them oversize colours to help them have a bit more on table presence when on with the German battalions. You can call it artistic licence and I'm the artist and I'm happy.

All in all I'm quite pleased with the look achieved but would really like to see new options in 18mm to do the Dutch in Spain, but until then these will be my chaps for Talavera.

I am now getting ready for a two week holiday in France, so the German Division will go on hold until I am back, but I do aim to post some holiday stuff as I am close to Paris and the scene of Napoleon's 1814 campaign. Once back I'll be getting on with the 4th Dutch and some Romans!
Posted by carojon at 10:28