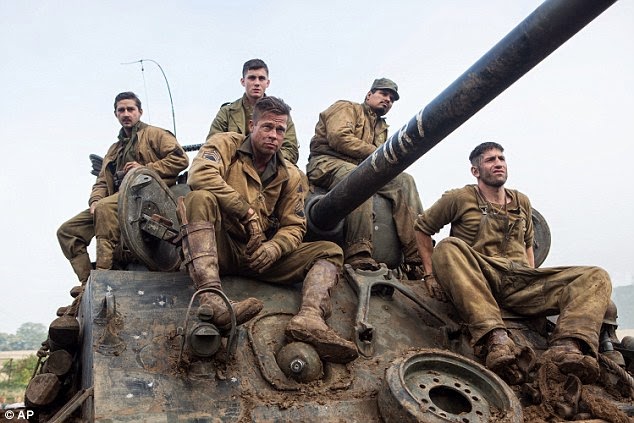 My son Tom and I went to the movies last night to see the brand new WWII film doing the rounds, "Fury" starring Brad Pitt.

We've been anticipating the launch of this movie since the announcement of its making and we were both looking forward to seeing it on the big screen, though with some reservations. The reservations being that as someone interested in the period and knowing more about it than the average film goer, you are never quite sure what you are going to be served up by the money makers of Hollywood.

I have been interested in following the discussions on various wargaming forums about the frustration of seeing historical themed films distorted in the name of artistic licence and the drive to make money on the project. I, personally do not buy into the theory that you can't have historical integrity and entertainment (I use that word in its widest meaning) that will draw in the audience. 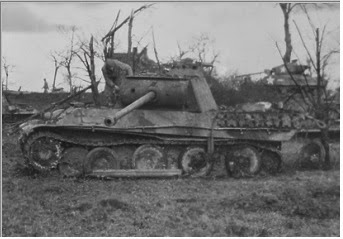 Pictures like the one above were surely in the mind of the writer and director David Ayer when putting this film together. As the introduction to the film announces;

"April 1945. As the Allies make their final push in the European Theatre, a battle-hardened army sergeant named Wardaddy commands a Sherman tank and her five man crew on a deadly mission behind enemy lines. Out-numbered, out-gunned, and with a rookie soldier thrust into their platoon, Wardaddy and his men face overwhelming odds in their heroic attempts to strike at the heart of Nazi Germany".


Well that sort of captures the theme of the film, but doesn't really do it justice. I came away from it with the feeling that at last we have a war movie that doesn't make it easy for you to take sides about who the heroes are and who are the villains.

We see a crew that have become desensitised to the war and seem to have only a few objectives in mind, achieving the mission, killing the enemy and protecting each other and those around them. Their focus seems to make them oblivious to all other considerations and the war crime committed by murdering a prisoner, is simply a way of recommitting to that focus. It makes the point that "total war" the war that WWII was, is not a simple case of right vs wrong, good vs evil; as with most conflicts, the boundaries between the opposing sides can become blurred, and at times I found myself questioning the morality of the crew and what they were doing and the drivers and emotions involved in their decisions. I thought the challenge that war presents to morality was very well portrayed, with the character "Wardaddy" explaining that peaceful morality is achieved at the expense of extreme violence.

The moral challenges presented by the crew were counterbalanced by the extreme horror of the latter days of WWII with the Nazi regime on its final path to complete destruction, committing the final atrocities on their own people, with men women and children seen hanging from lampposts with signs around their necks explaining their treachery to the state and the punishment that awaited others like them. The Hitler Youth, boys and girls, enrolled into the Nazi tank hunting teams that lurked in the fields and villages of every German neighbourhood, and the utter waste of life and futile nature of the resistance was well portrayed.

This film is a hard watch in terms of the brutality and the senseless destruction that is the nature of modern war, and we both came away with that message reinforced, but this film is also an adrenalin rush when the shooting kicks off. We move from one scenario to the next with that tense expectation of death and destruction awaiting the soldiers around each and every twist in the road. The military kit on display was excellent as were the costumes and the combat scenes which were everything you would expect from a modern war film with the sound and visuals of the tracer and antitank rounds flying over the open muddy fields truly exhilarating.

The combat with the Tiger tank was the crescendo in the tank fighting and I found myself mentally driving that Sherman as the duel reached its conclusion. I remembered the comments from my Dad about the manoeuvrability of the Sherman and how he felt they could move more quickly than their German counterparts. I also remembered his comments that are echoed by all "tankies", that the tank and the crew were their home, and that in many respects that was what they were fighting to protect.

I can't say a little bit of artistic licence didn't creep into this movie. The inability of the German anti tank gunners to get a second round hit on tanks moving towards them head on seemed a little bit suspect. In one scene a Sherman is hit on the side at respectable range by a panzerfaust that somehow avoids an ammunition explosion (must have had FOW wet stowage) and the crew don't bail out. However this is just small critiquing on my part.


We both felt that Fury is the next step on from "Saving Private Ryan" and "Band of Brothers" where the action is matched with a gritty reality that there really isn't much "Spielberg schmaltz" in war and that sometimes the good guys do bad things. I thought Brad Pitt's performance, as the other actors, was well done and I felt they captured the cynicism of a battle hardened tank crew that just wanted to get the war over as soon as possible.
Posted by carojon at 03:18