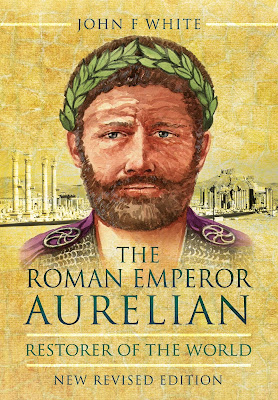 JJ Note: Well how about this for a fast turn round following our experiment in 'blogmocracy', and thank you to all those who expressed an opinion.
http://jjwargames.blogspot.co.uk/2017/11/mr-steves-book-review-poll.html
Just for the record, I had this one as my first choice closely followed by the Barons War. I think after Augustus and Trajan, Aurelian has to be right up there among the great Roman Emperors. Over to Mr Steve's review.

Be honest, how many of you have heard of him? You’re probably pretty confident with all the Early Imperial guys from Augustus until you arrive at Trajan or Hadrian and after that it all gets a little fuzzy until Constantine turns up and yet Aurelian was probably one of Rome’s better emperors.

To help explain where we are in the timeline let me show you how I mentally split up the Imperial Roman era:

27BC-217AD: Early period from Augustus to Septimus Severus ( look him up, he died in York) . Rome at its peak, with a strong army and pushing outwards.

217-337. Caracalla to Constantine the Great, the middle years when things start to go bad, the army is still mainly infantry but the quality has dropped and recruitment is getting difficult, there are frequent revolts, invasions, plagues and usurpers and the life of an emperor is normally short. Its one crisis after another.

337-476: The barbarian years, Constantine II to Romulus Augustulus. The army is mainly made up from non-Romans and lead by non-Romans, taxation is virtually non existent and the empire slowly breaks up into separate sections as invaders settle. Western Rome is in effect run by a succession of Warlords such as Aetius, Stilicho and Ricimer.

Aurelian falls into my middle section and is probably best remembered as the emperor who defeated the Palmyrene’s under Queen Zenobia. 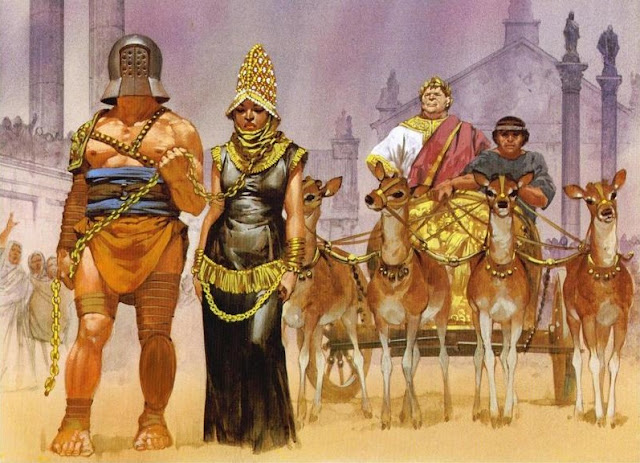 So on with the review, now most books on Roman personalities have one big problem, there is only a tiny amount of period material available for the author to use. You could pad out the pages by trying to back up your pet theories on what might have happened or you can instead add in additional material related to your topic person, in this case I was pleased to see it was the later.

It starts with a brief explanation of what ancient sources were available to the author and he also raises the topic of the contentious “Augustan History’s” and how much of it can be used. (I am not going to expand on this here, look it up ) .

Chapters 2 to 4 cover the four preceding emperors, mainly Gallienus and his father Valerian (the first Persian footstool) probably because they managed to reign the longest and it was also during their time that Aurelian grow up and rose to prominence. Usurpers and Barbarian invasions are common place, add in a strong Persian King on the rampage and it was busy time.

Gaul, Britain and Spain broke away under their own emperor and had to be left alone. This was bad news as it meant no taxes or troops that could be re-located to trouble spots elsewhere and no silver
from Spain. The coinage was already debased and now, with nothing coming out of the Spanish mines, it only got worse.

Silver coins were for everyday use and is why we have found so many of them, whilst Augustus’ coins had a 95% silver content, silver coins from this period contained 2% with nothing but a silver wash across the face which very soon wore away and this resulted in a dramatic collapse in confidence and of course caused inflation.

If you did get your hands on older coins then they tended to be horded somewhere safe for us to find later with metal detectors plus your army isn't that happy about being paid in worthless coins and you don’t want to upset them. Oddly gold coins more or less kept their same high gold content but this wasn't of much use to the poor who never saw any.

In Chapter 5 Aurelian is proclaimed emperor by the army upon the untimely death from plague of Claudius II who had been doing quite a good job until that moment. Aurelian’s first task was to stop another wave of Barbarian invasions, this time by the Goths, the Vandals and the Germans who all saw a possible opportunity in the usual chaos that occurs by the change in Emperors. Normally this would have been a good bet but this time it wasn't as Aurelian was not only on the spot with the main army but he was currently unchallenged by rivals and was also a very competent general. 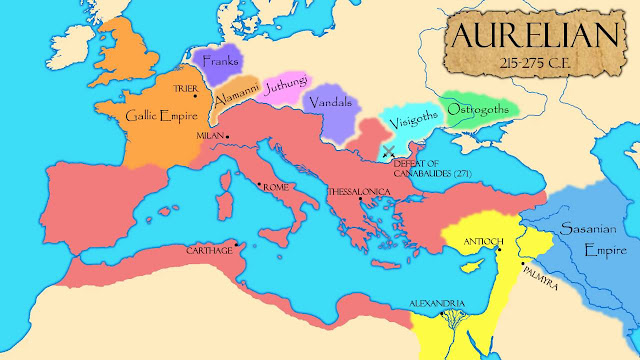 Afterwards he went on to Rome to make sure that the Senate was onside and whilst there he started the construction of new city walls which are still present to this day. He was also the Emperor who pulled out of Dacia and made the Danube the new border.

Chapter 6: The East ; The eastern half of the empire was in a bit of a mess due to Shapur the Sassanid Persian King, he had taken advantage of Rome’s weakness and conquered or pillaged huge areas even going deep into modern Turkey rather than just pottering around the middle east as was normal. Fortunately for Rome the Palmyrenes stepped forward and not only held Shapur in check until his death but they also took the opportunity to make sure the rest of the eastern part of the empire was nice and safe as well, which was nice of them, even going so far as to control Egypt.

Coins issued at the time (I want to talk more about coins at the end) showed both their King and whoever the current Roman Emperor was as joint rulers. This changed when he was assassinated and Zenobia ruled as queen regent for her son, now it was only their heads that appeared on the coins with no mention of Rome. This chapter deals with Aurelian’s campaign in the East and the war against Palmyra. One side note for those who remember WRG 5th/6th edition, the Blemmyes’ get a mention.

Chapter 7 is quite long as it covers the rest of his short reign such as the bloodless recovery of the breakaway West, improvement to the debased coinage, various new laws on taxation plus other changes he introduced once he was back in Rome including trying to help the poor (Free Pork for all!) With the Empire restored it was time to head back east and do what all emperors did when bored and that was to pick on the Persians, on the way out he was assassinated.

Chapter 8 briefly covers the next six emperors until Diocletian takes over.

Chapter 9: Legacy of the Danubian Emperors, despite the title what this chapter does is allow the author to give a quite good analysis of what damage the chaos of the 3rd century did to the Roman Empire.

There are then the usual key dates, notes and an index.

I liked this book ,there’s enough content to make it worthwhile and the adding in of the Emperors fore and aft helps to give you a better feel to the 3rd Century which is often rushed over so that we can get to Diocletian and Constantine who we know so much more about.

It is now extremely unlikely that we will ever discover any more ancient texts to shed further light on Rome apart from the odd papyrus dug up in a Roman desert fort asking a soldiers mum back home to send out more underpants, so the study of coins has become much more important and prominent.

Let me explain, Most of the texts we have for the 3rd C are either fragmentary or dubious however all Roman Emperors would constantly issue new coins as a means of spreading news to the masses and we have a huge amount of coins which can all be accurately dated.

Aurelian was given many titles due to his victories such as Gothicus Max or Germanicus Max, these we have found on coins and confirm that the wars mentioned in the surviving texts actually took place, also we can be sure that various usurpers mentioned are real as they too minted coins as soon as possible, once you find the last dated one then we know more or less when they were crushed.

I have even read some recently published books where virtually the entire timeline of events has been worked out just by coinage, but normally coins are now used to confirm what was previously known only by surviving texts.

Finally as wargamers we tend to only play the Early Imperial period and then jump to the Early Byzantines, however the 3rd century has just as many invasions and just as many different nationality’s that we could be playing, with maybe a little more chance of the Barbarians winning for once.

This has been a Mr Steve presentation.